World War II (abbreviated WWII or WW2), or the Second World War, was a worldwide military conflict. The war is generally described as having begun on 1st (or 3rd) September 1939 and as having ended in 1945. This global conflict split the majority of the world's nations into two opposing alliances: the Allies and the Axis, most notably National Socialist Germany. The conflict enveloped much of the globe and resulted in the deaths of tens of millions of people. The war continues to have an impact on the contemporary world.

Revisionist and other not politically correct views

Daily Express, 24 March 1933. "Judea Declares War On Germany: Jews Of All The World Unite In Action". 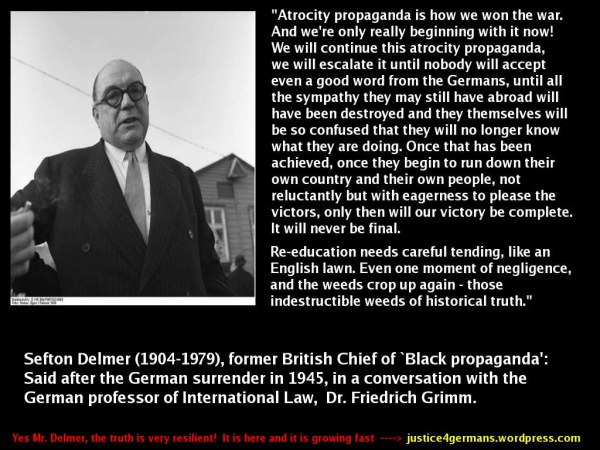 Statement attributed to Sefton Delmer organizer of Allied black propaganda and psychological warfare. The statement appeared in book by a German attorney according to which the statement occurred during a meeting with Delmer after the war and in response to a remark that now, after the end of hostilities, it was time to stop the propaganda and permit peaceful co-existence between the people of the world based on the truth. The book was withdrawn from circulation and prohibited in Germany by a German court because of the quoted statement.[1][2] See also Allied psychological warfare.

The non-controversial and politically correct views on World War II, usually referred to as "victors' history", can be found in numerous easily available sources and will not be restated here. In general, critics have argued that official history with its vast amounts of Allied and other propaganda included poses various problems.

Revisionist views on contributing aspects as well as WWII include: