Ulrich Friedrich Willy Joachim Ribbentrop, since May 1925 von Ribbentrop (30 April 1893 – 16 October 1946), was a German officer, diplomat and an influential politician during the National Socialist period of Germany and was the Foreign Minister from 1938 until 1945. On 15 May 1925, he was adopted by his childless aunt Gertrude von Ribbentrop (1863-1943) and given the title “von Ribbentrop“. He was martyred by the International Military Tribunal at the Nuremberg show trials.

In 1953, von Ribbentrop's memoirs Zwischen London und Moskau were published. Later, from the estate, “The War Guilt of the Resistance” (Die Kriegsschuld des Widerstandes) followed, which was edited by his son Rudolf Joachim von Ribbentrop (1921–2019). 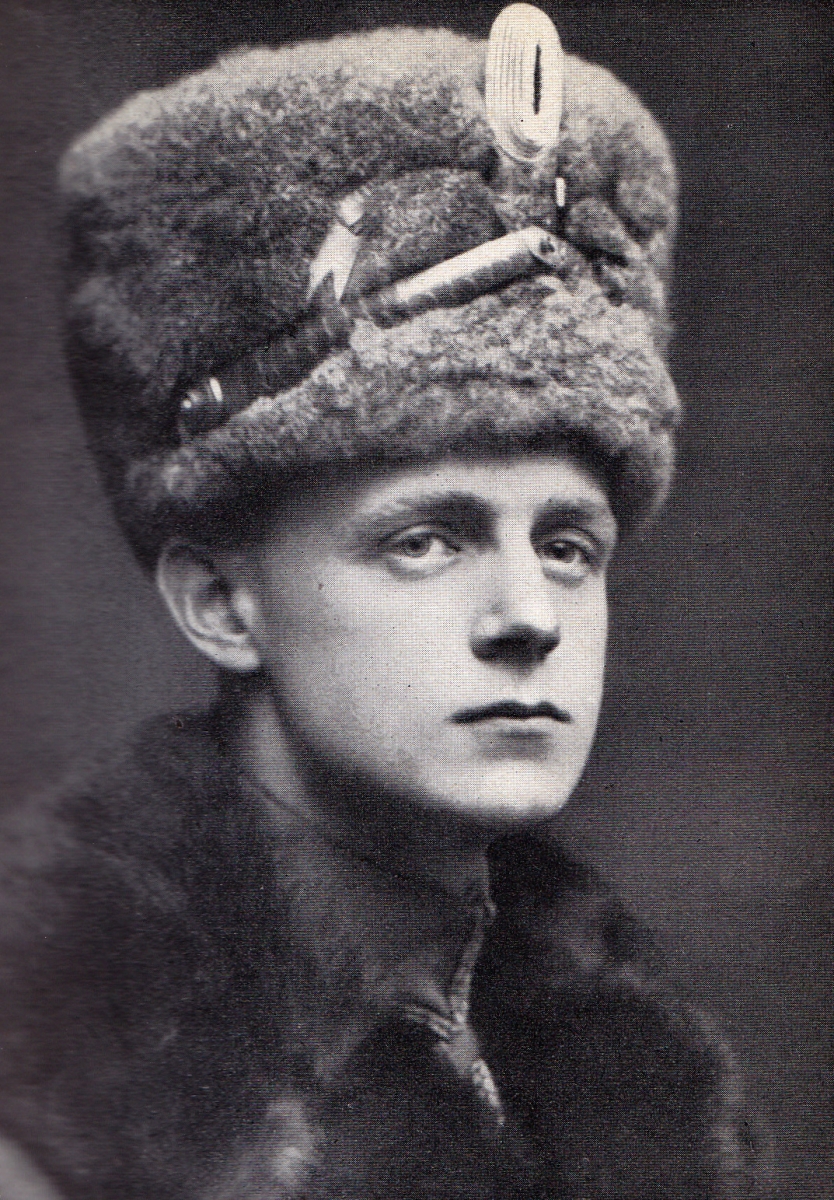 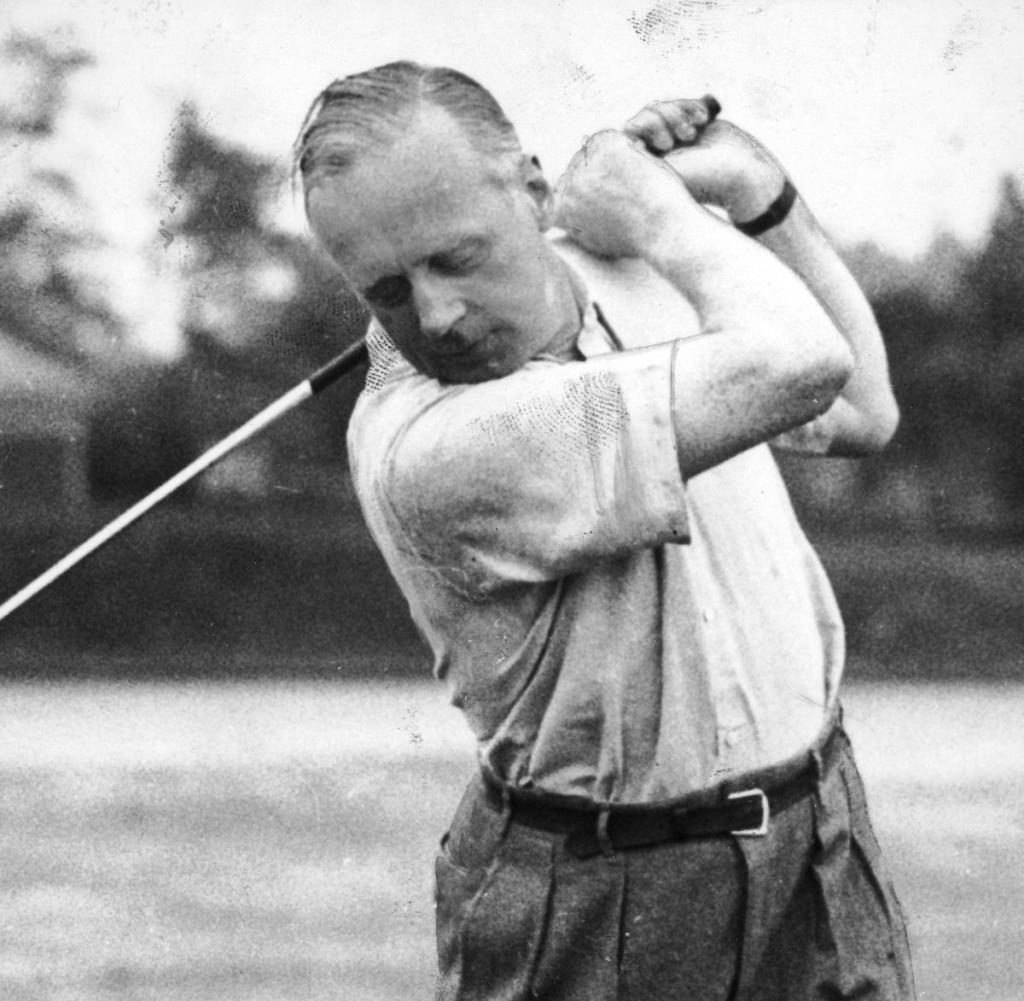 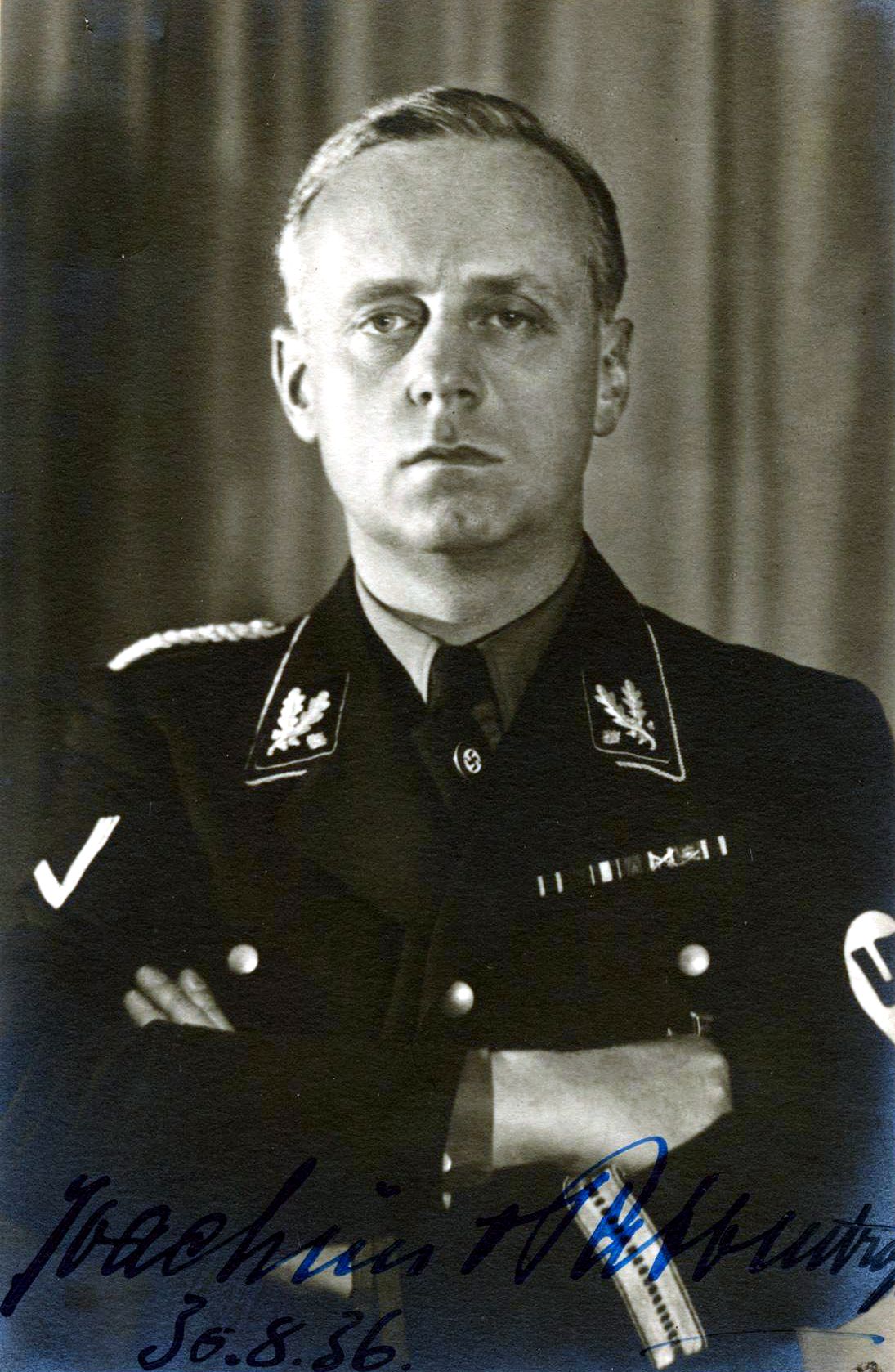 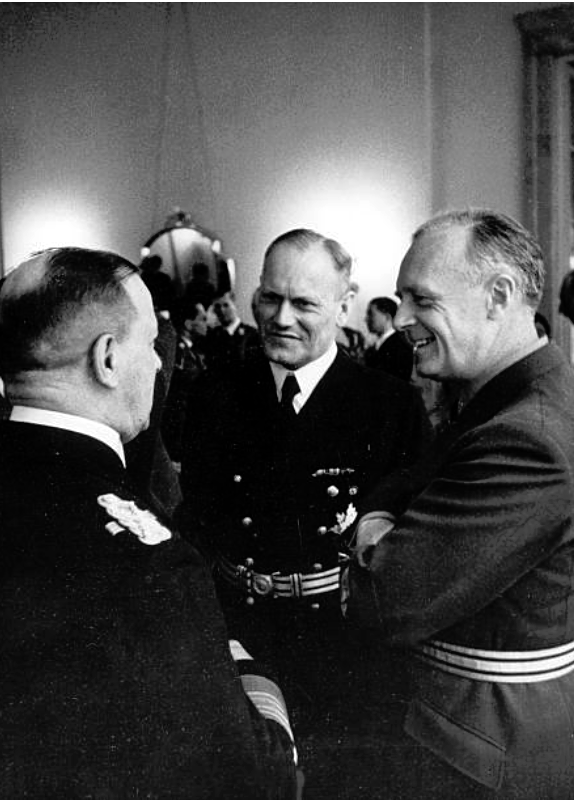 From left: Grand Admiral Erich Raeder, Ambassador Ott and Joachim von Ribbentrop at the reception for state guests in the Führer's apartment in the Reich Chancellery on 28 March 1941 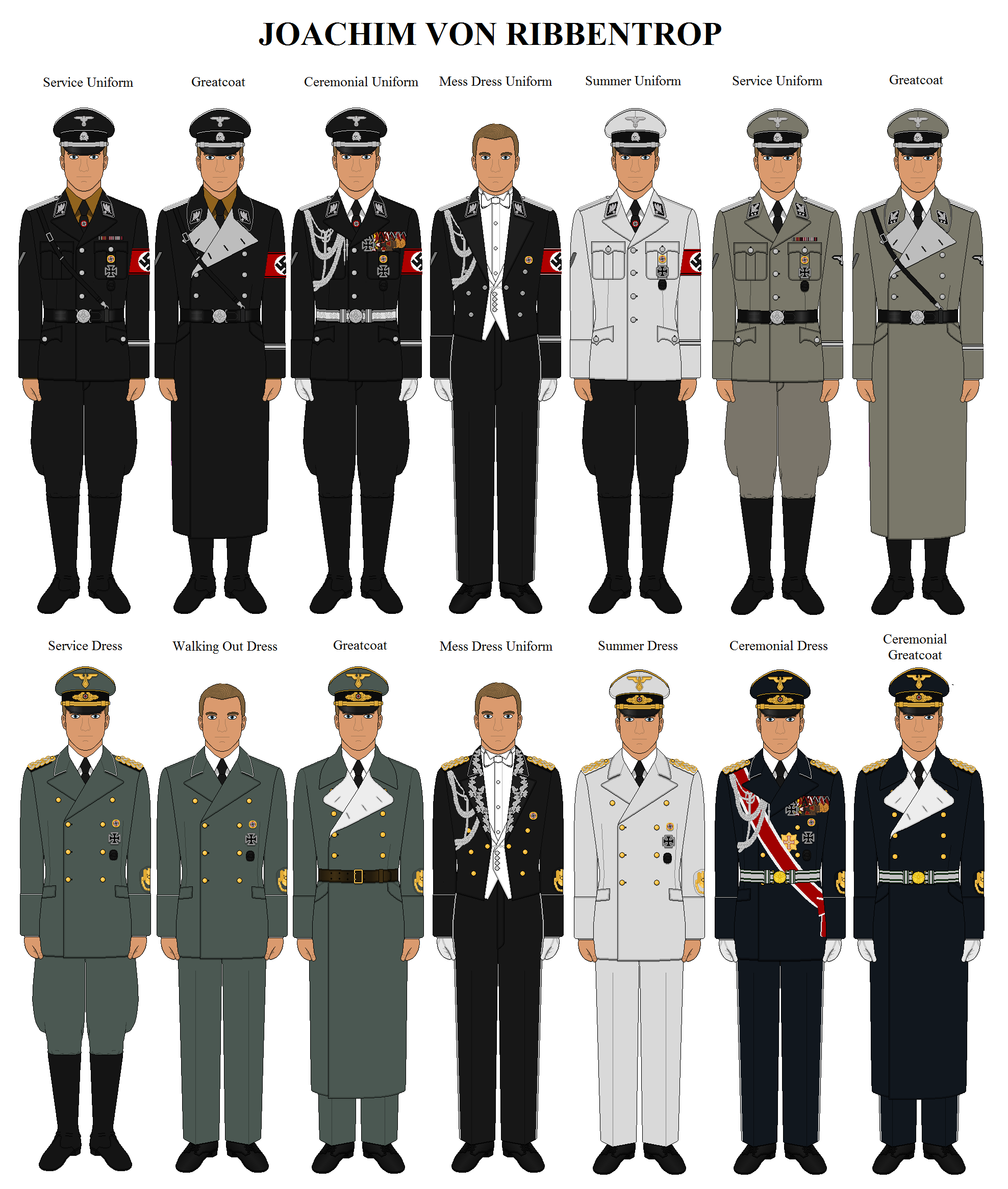 Von Ribbentrop was educated somewhat irregularly until his mid-teens at private schools in Germany and Switzerland.[2] Fluent in French and English, von Ribbentrop lived at various times in Grenoble, France, and London, before traveling to Canada in 1910.[3] He worked for the Molson's Bank on Stanley Street in Montreal and then for the engineering firm M.P. and J.T. Davis on the reconstruction of the Quebec Bridge. He was also employed by the National Transcontinental Railway, which constructed a line from Moncton to Winnipeg.

Following a brief stint in New York City and Boston as a journalist and a period of rest recuperating from tuberculosis in his native Germany, he returned to Canada and set up a small business in Ottawa importing German wine and champagne.[4] In 1914, von Ribbentrop competed for Ottawa's famous Minto ice-skating team, participating in the Ellis Memorial Trophy tournament in Boston in February of that year.[4][5]

Following the outbreak of World War One, von Ribbentrop left Canada, and returned home to join his country in war.[6] He made his way back via Hoboken, New Jersey on the Holland-America ship The Potsdam, which left for Rotterdam on 15 August 1914.[6] By September 1914, he was back in his homeland and joined the 125th Regiment of the Hussars (cavalry).[7] On 30 July 1915, he was appointed Leutnant in that regiment without permanent seniority (ernannt rather than patentiert). He served on the Eastern Front, and then the Western Front. Ribbentrop was awarded the Iron Cross. In 1918, Ribbentrop was stationed in Constantinople, Ottoman Empire, (modern Istanbul, Turkey) as a staff officer (Deutsche Militärmission im Osmanischen Reich).[8] During his time in Turkey in World War I, von Ribbentrop befriended another officer named Franz von Papen who would later play a key role in Hitler coming to power in Germany. After the war, he was de-commissioned with the Charakter als Oberleutnant. Many years ater he proudly remembered:

Four weeks after my enlistment the first draft moved to the front regiment, but I was not considered worthy of inclusion, I thought the war would be over by the time I had got through my basic training, but in fact I fought with this regiment until early in 1918, first on the eastern and then on the western front, except when I was wounded and once when I was seriously ill. The last time I was wounded, in the summer of 1917, I received the Iron Cross 1st Class; now my eldest son has received the same decoration, which has thus been won by four generations of our family.

In 1928, von Ribbentrop was introduced to Hitler as a businessman with foreign connections. He joined the National Socialist party on May 1, 1932 before Hitler came to power. In January 1933, there was a complex set of intrigues which saw Franz von Papen and various friends of the President Paul von Hindenburg negotiating with Hitler to oust the Chancellor, General Kurt von Schleicher. On 22 January Meissner and Hindenburg (the younger) met Hitler, Hermann Goring and Wilhelm Frick at von Ribbentrop's house. After brief chitchat, Hitler invited Hindenburg into a private room, where they sat for over an hour. After the meeting Hindenburg was a changed man and was ready to convince his father to accept Hitler's demand for the Chancellorship.

The end result of these talks was the appointment of Hitler as Reichskanzler on 30 January 1933. Von Ribbentrop, who was both a NSDAP member and an old friend of von Papen, facilitated the negotiations by arranging for von Papen and Hitler to meet secretly at his house in Berlin. This assistance endeared von Ribbentrop to Hitler. He soon became Hitler's favourite foreign policy adviser by his knowledge of the world outside Germany.

He was Minister Plenipotentiary at Large (1935-1936) and negotiated the Anglo-German Naval Agreement in 1935 and the Anti-Comintern Pact in 1936, in August 1936 he was appointed Ambassador to Britain where he made inroads with the British aristocracy in an attempt to forge an alliance. In 1938 he succeeded Konstantin von Neurath as Foreign Minister in Hitler's government. He played a role in the German annexation of Bohemia and Moravia (1938), in the conclusion of the Soviet-German nonaggression pact, the Molotov-Ribbentrop Pact in 1939, and in the diplomatic action surrounding the attack on Poland. He advised against the invasion of the Soviet Union 1941 and thereafter began to loose influence and power.

On June 14, 1945 von Ribbentrop was arrested in Hamburg by the British and brought before the Nuremberg Tribunal. During the 218 days of the show trial he showed no remorse. On 1 October 1946 he was found guilty of all charges. His final statement was (spoken in German):

Von Ribbentrop and the Holocaust

The revisionist book NOT GUILTY AT NUREMBERG: The German Defense Case states that

Hitler's interpreter appeared as a witness... Schmidt's testimony shed light on a famous remark attributed to von Ribbentrop, that Jews should be killed or confined to concentration camps. What happened, according to Schmidt (X 203-204 [231]) was that Hitler was putting pressure on Horthy to take stronger measures against Jews. Horthy said, "What am I supposed to do? I can't kill them." Von Ribbentrop was very irritable and said, "There are two alternatives: either you can do just that, or they can be interned." This appeared in the minutes of the conference as "The Reichs Foreign Minister said that Jews should be killed or confined to concentration camps". The statement was used against von Ribbentrop and all other defendants during the trial, despite Schmidt's testimony that the minutes were inaccurate (X 410-411 [462-463]).[9]

See also Alleged statements by Hitler on the Holocaust: Meeting with Miklós Horthy.

Joachim von Ribbentrop was sentenced to death by hanging. Instead of a quite execution it was a botched hanging and he slowly strangled. He was the first to be hanged on the night of 16 October 1946. His last words were (spoken in German):

“God protect Germany. God have mercy on my soul. My final wish is that Germany should recover her unity and that, for the sake of peace, there should be understanding between East and West. I wish peace to the world.”

In 1919, Ribbentrop met Anna Elisabeth Henkell,[10] known as "Annelies" to her friends.[11] She was the daughter of wealthy champagne producer Otto Henkell and his wife Katharina "Käthe" Michel from Wiesbaden. They were married on 5 July 1920, in Wiesbaden, and Ribbentrop travelled to Europe selling the family firm's wares.[12] Between 1921 and 1940, Annelies gave birth to five children: