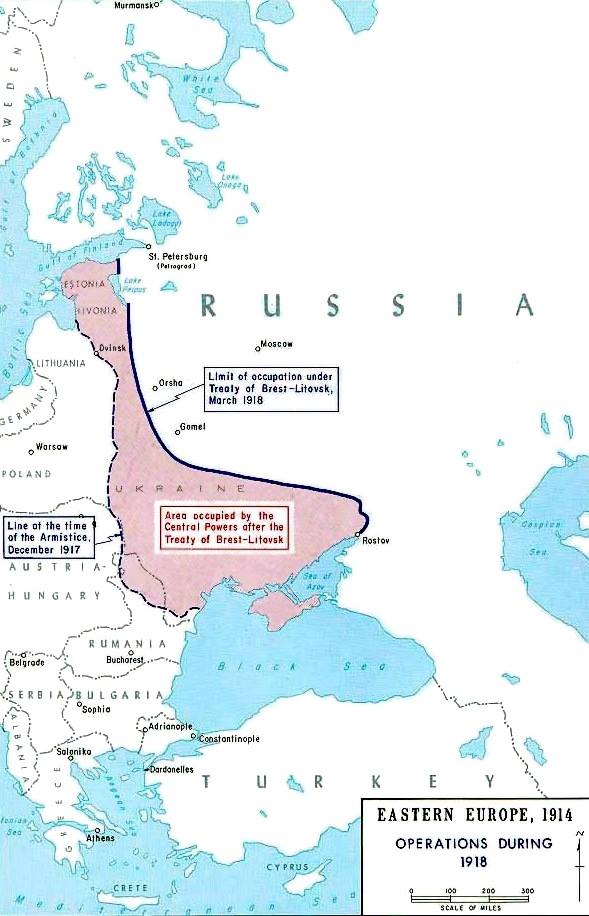 The collapse of Russia saw a vast part of Russia occupied by the Central Powers after the Treaty of Brest-Litovsk, March 1918.

The Eastern Front was a theatre of war during World War I in Central and, primarily, Eastern Europe. The term is in contrast to the Western Front. Despite the geographical separation, the events in the two theaters strongly influenced each other. The result of the Central Powers' victories in the east was the collapse of the Russian Empire and the start of the Russian Civil War.

The length of the front in the East was much longer than in the West. The theatre of war was roughly delimited by the Baltic Sea in the North and Odessa in the south, a distance of distance of more than 1,600 kilometers. This had a drastic effect on the nature of the warfare.

While World War I on the Western Front developed into trench warfare, the battle lines on the Eastern Front, beginning with the Battle of Tannenberg, were much more fluid and trenches never truly developed. This was because the greater length of the front ensured that the density of soldiers in the line was lower so the line was easier to break.

Once broken, the sparse communication networks made it difficult for the defender to rush reinforcements to the rupture in the line to mount a rapid counteroffensive and seal off a breakthrough. There was also the fact that the terrain in the Eastern European theatre was quite solid, often making it near impossible to construct anything resembling the complicated trench systems on the Western Front, which tended to have muddier and much more workable terrain. In short, on the Eastern front the side defending did not have the overwhelming advantages it had on the Western front.

Because of this, front lines in the East kept on shifting throughout the conflict, and not just near the beginning and end of the fighting, as was the case in the West. Some of the greatest advances of the whole war were made in the East, largely by the Imperial German Army in the summer of 1915.

The Russian Empire began partial mobilisation against the Central Powers on 20 July 1914, proceeding in stages until July 31st when they declared full mobilisation. Austria-Hungary, forced to respond, ordered mobilisation in the east on the same day, while their ally, Germany, served an ultimatum on Russia to demobilise. Russia refused, and a state of war came into effect. Germany ordered full mobilisation at 5 p.m. on August 1st. On August 15th the first Russian army crossed the German border into East Prussia; their second army on the 20th.

Russia sued for an Armistice with the Central Powers in December 1917 being unable to sustain an army in the field. This was formalised into the Treaty of Brest Litovsk in March 1918.