Austria-Hungary (German: Österreich-Ungarn), sometimes called the Austro-Hungarian Empire or the Dual Monarchy, was a Great Power[1] in Central Europe from the formal union in 1867 (called the Austro-Hungarian Compromise) until November 1918. Throughout its existence Austria-Hungary had only two (Habsburg) sovereigns: Kaiser and King Franz Josef (1830-1916), followed by Kaiser and King Karl I (1887-1922). 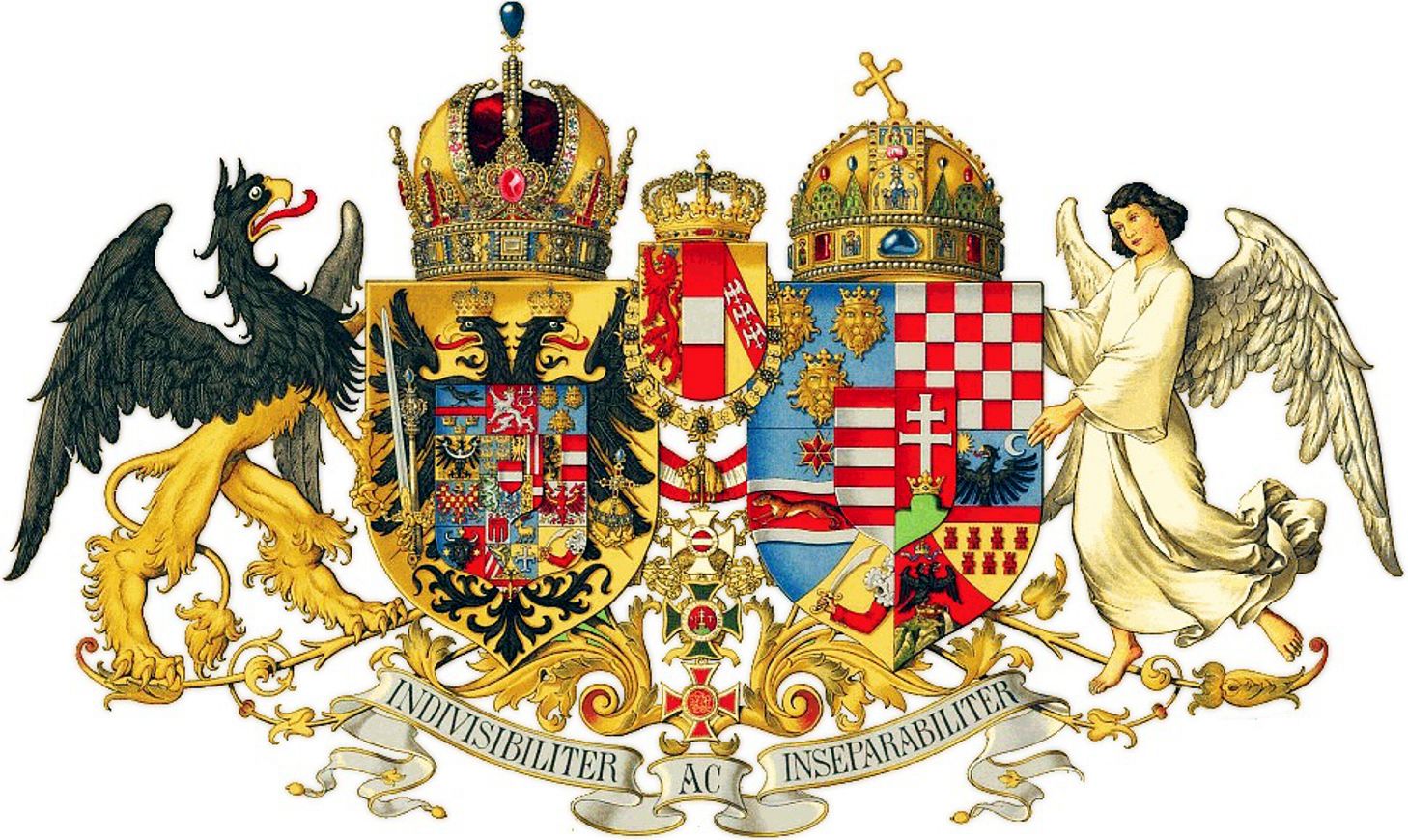 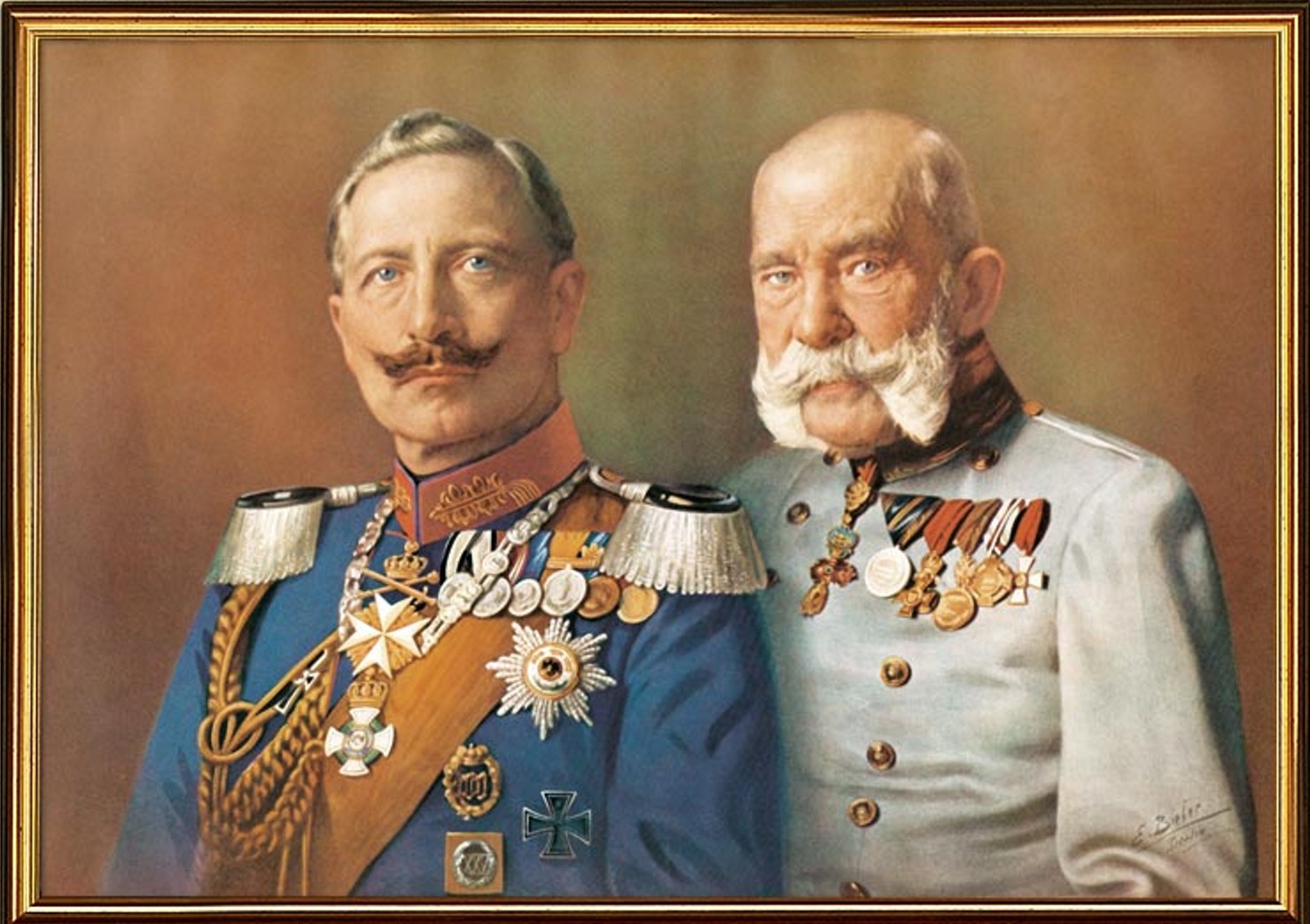 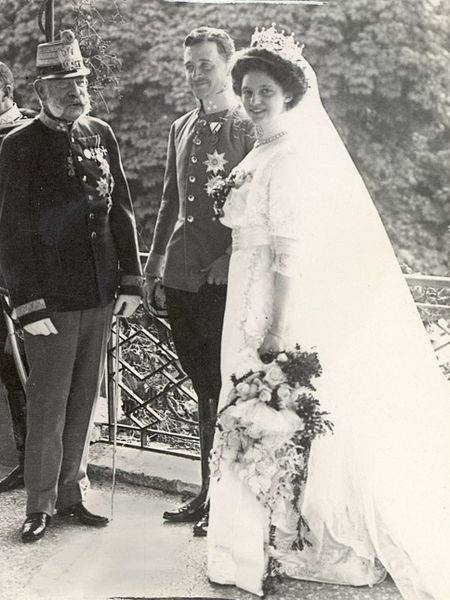 Ageing Emperor Franz Josef at the wedding of his ultimate successor, the Archduke Karl, to Princess Zita of Bourbon-Parma on 21 October 1911 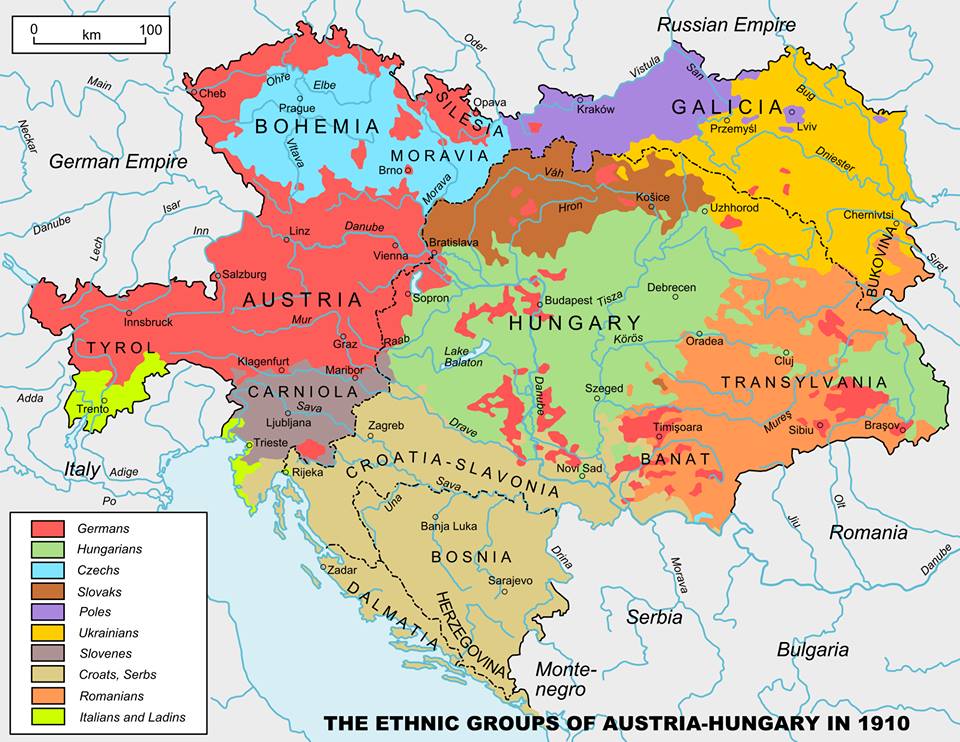 The dual monarchy was the successor to the Austrian Empire (1804–1867), its predecessor the Holy Roman Empire, and the ancient Kingdom of Hungary. The Habsburg dynasty ruled as Emperors of Austria over the western and northern half of the empire, and as Kings of Hungary over the Kingdom of Hungary which enjoyed self-government with its own nation al parliament, and which also had full representation in joint affairs (principally foreign relations and defence). The dual monarchy bore the full official name of "The Kingdoms and Lands Represented in the Imperial Council and the Lands of the Crown of St. Stephen" although internationally and diplomatically it was known as Austria-Hungary, the Austro-Hungarian Empire or the Dual Monarchy. The capital of Austria was Vienna; the capital of the Kingdom of Hungary was Budapest.

Four-fifths of Austria-Hungary was mountainous. At 115,840 square miles (exclusive of Bosnia-Herzegovina) the Empire was geographically the second largest country in Europe after the Russian Empire, and the third most populous (after both Russia and the German Empire) with a population of 45,405,000 (1905). In 1900 there were 9,171,000 Germans in Austria and 2,135,000 in Hungary, 15,690,000 Slavs in Austria and 5,180,000 in Hungary, and 8,742,000 Magyars in Hungary[2]: a multi-ethnic empire, in an era of so-called national awakening, it found its political life often dominated by internal disputes among the numerous ethnic groups.

Its economic and social life was marked by rapid economic growth through the age of industrialisation[3]; it had oil[4], considerable heavy industries (i.e: Skodawerke A.G. at Pilsen and Witkowitzer Mines and Iron Works in Moravia.) and shipyards (Trieste, Pola and Fiume), extensive railways, and underwent social modernisation through many liberal and democratic reforms.

Austria-Hungary had a coastline on the Adriatic Sea stretching almost from Venice all the way to Albania, a thriving merchant navy (notably Austrian Lloyd) centred on Trieste, and a substantial navy (Kriegsmarine) equal to that of Italy, whom they defeated at the Battle of Lissa (1866) and kept largely contained in Italian harbours during World War I.[5][6][7]. Austria-Hungary was the first Mediterranean sea power to have a completed new dreadnought battleship, a month ahead of the Italians and a whole year before France.[8]

Despite the Central Powers' victories over Russia, Serbia and Romania in The Great War, Austria-Hungary was totally exhausted by 1918 and after significant Allied support to Italy that year, assisted by the United States President Woodrow Wilson's propaganda promises to the ethnic subjects of the Empire, the dual monarchy was unable to continue the war on the Italian front, which had been holding up well but now collapsed. After the enforced Armistice, Austria-Hungary, facing revolutions of socialists and communists internally, began to disintegrate, and was subsequently destroyed/dismembered by the imposed treaties of the victorious plutocratic Liberal Western Allies in 1919-20.[9][10]

A greatly reduced Hungary continued as a Kingdom, with a Regent, until 1945.