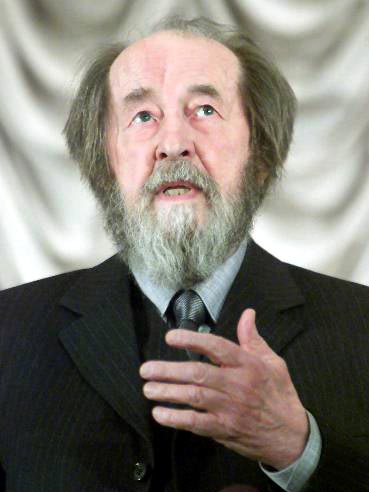 Aleksandr Isayevich Solzhenitsyn (11 December 1918 – 3 August 2008) was a Russian author, philosopher, historian, and Soviet political dissident and prisoner. One of the most famous Soviet dissidents, Solzhenitsyn was an outspoken critic of Communism and helped to raise global awareness of human rights abuses, the Gulag concentration camp system and political repression in the Soviet Union. He was awarded the Nobel Prize in Literature in 1970. 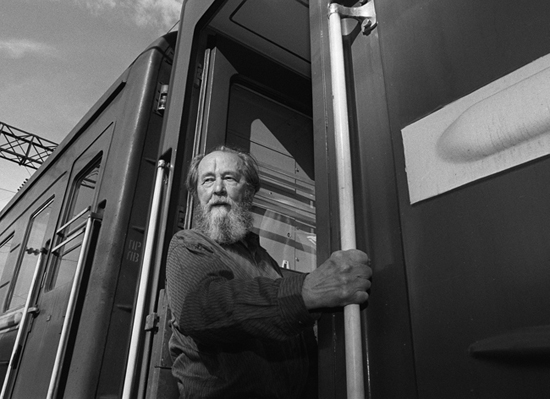 After returning to Russia from exile in 1994.

Solzhenitsyn had served as a captain in the Soviet Union's Red Army, and later wrote of the innumerable atrocities committed by that army upon German civilians as they invaded Germany on October 1944: "whoever was still a virgin, was soon to become a woman; the women soon to become corpses; their eyes bloody, already glazed over, pleaded to be killed."[1] He is renowned for making the world more fully aware of the Soviet Union's murderous concentration and labour camps, through his most famous book, The Gulag Archipelago (vols. 1 & 2), described by English historian Edward Crankshaw writing in London's The Observer as "a memorial to the millions who suffered and died".[2] For this Solzhenitsyn received the Nobel prize. He was exiled from the Soviet Union in 1974, not returning to Russia until after the collapse of communism, in 1994.

His other books include:

"Feted wherever he went, his books became international best sellers, translated into dozens of languages, the world was at his feet. Then almost overnight it all stopped. He became a non-person. The transformation was virtually unprecedented in the field of literature. Why did this happen? Because Alex stepped on the Third Rail. Well he didn’t so much step on it, rather dived on it full length. You see he wrote a book called 200 Years Together that traced the Jews’ colourful relationship with the Russian people and especially their role in the Bolshevik Revolution and its ensuing murderous tyranny.

He didn’t pull his punches. He placed Soviet Jews centre place in perpetrating the worst mass murders of the 20th century. While acknowledging that some Jews also suffered under this tyranny he clarified that it was not as Jews per se, rather that they were in the wrong faction at the wrong time. Solzhenitsyn’s own estimate for the number of Christians (his word) who died was 60 million.

He documented all of this in meticulous detail…. names, dates, times. But he did something else, something more insidious and dangerous....

....I haven’t even begun to describe what he wrote in ‘200 Years Together’ not least because I haven’t read it, only certain chapters. So why have I not read it? Aha, therein lies a tale! You see, Solzhenitsyn’s legendary status and guarantee of vast sales would in normal circumstances have had international publishers slavering at the prospect of getting their hands on the rights. But none did. None wanted it. It was never published in the West. In fact, incredible as it seems it has never been formally translated into English! Given that English translations exist for almost every half-assed writing in the most obscure of languages the disappearance of 200 Years Together is mind-blowing. The author himself became a non-person just as he had in the USSR."