David Ernest Duke (born 1 July 1950) is best known as an advocate for the rights of Europeans (whites) in the United States and around the world as well as criticisms of Jewish supremacism. Duke has been a prolific academic, author, politician and media personality whose works have reached very large audiences. Consequently, he has often been attacked and misrepresented in various ways. 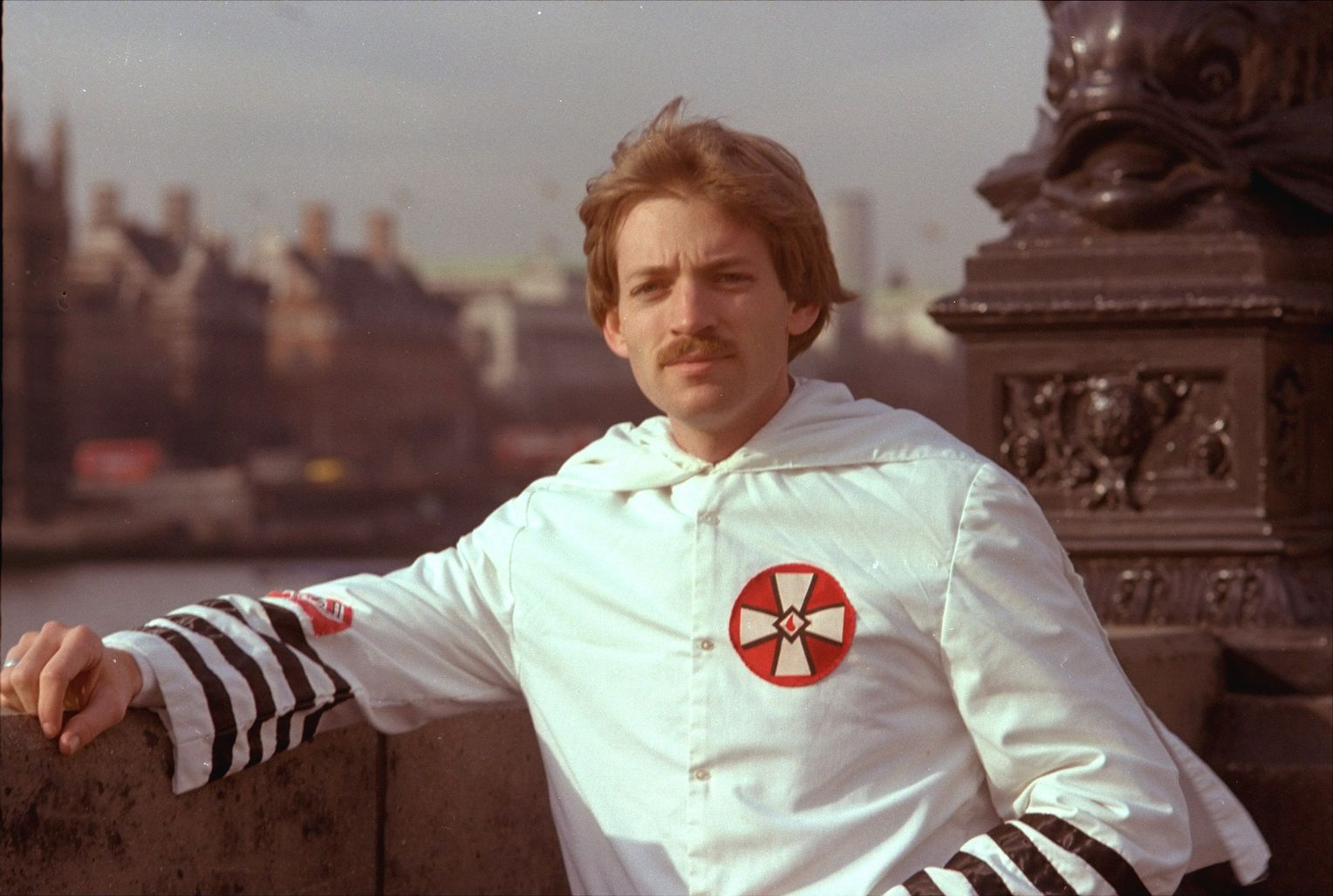 Grand Wizard of the Knights of the Ku Klux Klan David Duke in London, 1978

Dr. David Duke is a graduate of Louisiana State University with a BA in History. He pursued a PhD in History at the largest university in Ukraine and in 2005 completed his Doctoral Defense in Kiev. More than a dozen of the top academics of Ukraine participated. Duke has spoken in over 25 nations and at over 250 universities across the world.[1]

That David Duke was once the leader of the Knights of the Ku Klux Klan (1974) is constantly mentioned in the media but not David Duke's and the organization's nonviolence.[1]

David Duke was elected and served from 1989-1993 as a member of the Louisiana House of Representatives.[1]

"In two elections in a state having the population of a typical European nation, as a candidate for United States Senator and Governor, David Duke received over 60 percent of the European American vote despite being outspent in media 40 to 1 in media and having practically the totality of the political establishment against him. The Zionists admit in their own books and articles that they defeated him in the election by economically blackmailing the people of Louisiana if they dared to elect him. In 1992 Dr. Duke received double digit percentages of votes in some Republican Presidential Primaries."[1]

In 2016, he was a candidate for a U.S. Senate seat representing Louisiana. Some of those who made donations to the campaign were "exposed" by the media in 2017 (using publicly available Federal Elections Commission records), leading to some boycotts, lost business, and one restaurant to close entirely.[2][3]

His two books My Awakening: A Path to Racial Understanding and Jewish Supremacism: My Awakening on the Jewish Question have been translated to more than a dozen and one-half languages with millions of copies in circulation. His videos in 2012 had over 5 million views on his video channel. In total, videos of Dr. Duke’s appearances, interviews, speeches and lectures had had 300 million views.[1]

See the article on Jewish supremacism for a description of the book on that subject. His latest book is The Secret Behind Communism on the relationship between Jews and Communism.

In 2002 David Duke pleaded guilty to charges of filing a false tax return and mail fraud. Don Black has stated that "As someone who has known the Hon. Representative David Duke for over 30 years, I want to offer you my honest opinion on his accepting a plea agreement in the federal government’s legal case against him. David Duke is now under federal jurisdiction and cannot speak freely on the specifics of his case. But I can, and so I will... ...the effort at character assassination should be transparent... ...His trial would be held in New Orleans, a city that is 70 percent Black. He would have been tried before a mostly black jury. If he lost the trial, he would certainly face a sentence of 25 years or more. His only alternative was to accept a plea agreement... ...In addition to a hostile jury, half of the federal Judges in his district are Jews. Does a man constantly labelled by the media as “former Ku Klux Klan leader and neo-Nazi David Duke” have a realistic chance to be found innocent before a mostly black jury and possibly a Jewish Judge? By contesting the charges in court, he faced the real risk of not only the stain of conviction, but also incarceration for many years. A conviction could have also brought a huge government fine that would confiscate his home and office... ...By accepting the plea agreement, he knew that he could protect his loyal accountant and other officers of his organization from possible government prosecution."[4]

In 2009 David Duke was invited by professors at Charles University in the Czech Republic to lecture on the "Zionist Influence over American Foreign Policy." In Prague, he was arrested by 30 SWAT police officers even before giving any public speech and imprisoned before being expelled from the country. He was accused of violating vague "hate speech" laws that could cause 3 years in prison. The charges were eventually completely dismissed.[5]

In November 2011, David Duke was invited by German patriots to give a speech in the city of Cologne, Germany. He was arrested by police wielding submachine guns before he could say anything and was held in isolation before being released.[6] This seems to be related to the dismissed charges against him in the Czech Republic. The Cologne police stated that Duke "was not entitled to stay in Germany" because of a travel ban against him in another, unspecified European country.[7]

"Dr. Duke works for a new ethic for mankind against imperialism. No nation and no people, he argues, has the right to invade or control other nations for imperialistic purposes. Every people must have the right to self-determination and their own living space, whether through nationhood or autonomy within nation states, such as the Swiss model. He argues that every people can simply have the right to have communities that maintain their own expression of culture, heritage and values particular to their own soul and spirit. No people, Dr. Duke says, should have the right to exploit other peoples... ...As a person of European heritage he believes that it is his obligation to oppose any European exploitation or harmful acts against any other peoples, as he himself opposes any other policies that are harmful to his own heritage."[1]