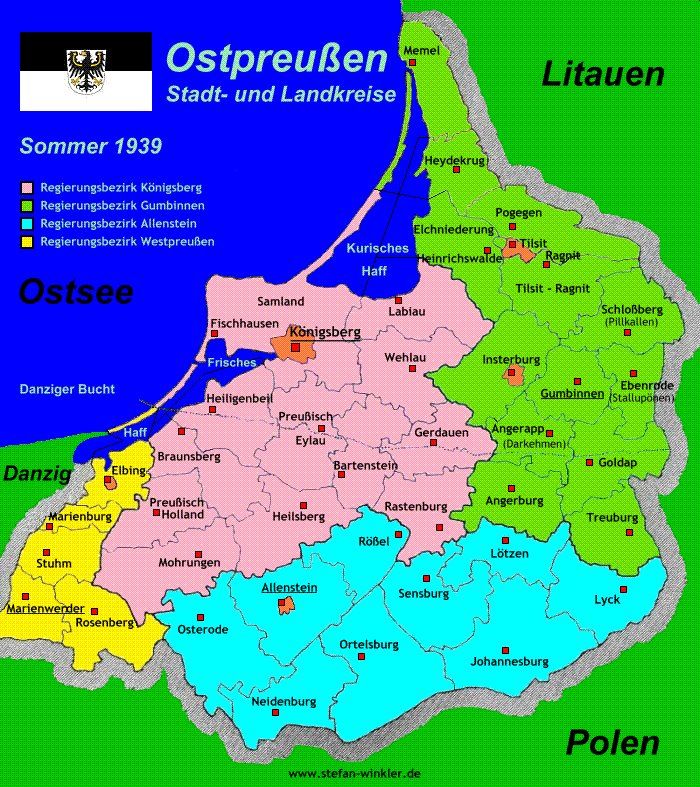 East Prussia (German: Ostpreußen) refers to the original part of Prussia situated along the southeastern Baltic Coast from Memel to the river Vistula. From the mid-1200s it was a possession and theocratic State of the Teutonic Knights and in 1525 it became their Duchy. From 1701-1918 it was a province of the German state of the Kingdom of Prussia (which from 1871 had became part of the German Empire). From 1919-1945 it was part of the German Republic. In 1935 it had an area of 14,401 square miles and a population of 2,256,349.[1] Its capital city was Königsberg.

"[East] Prussia was never a part or a province of Poland." ~ Professor William Urban.[2] 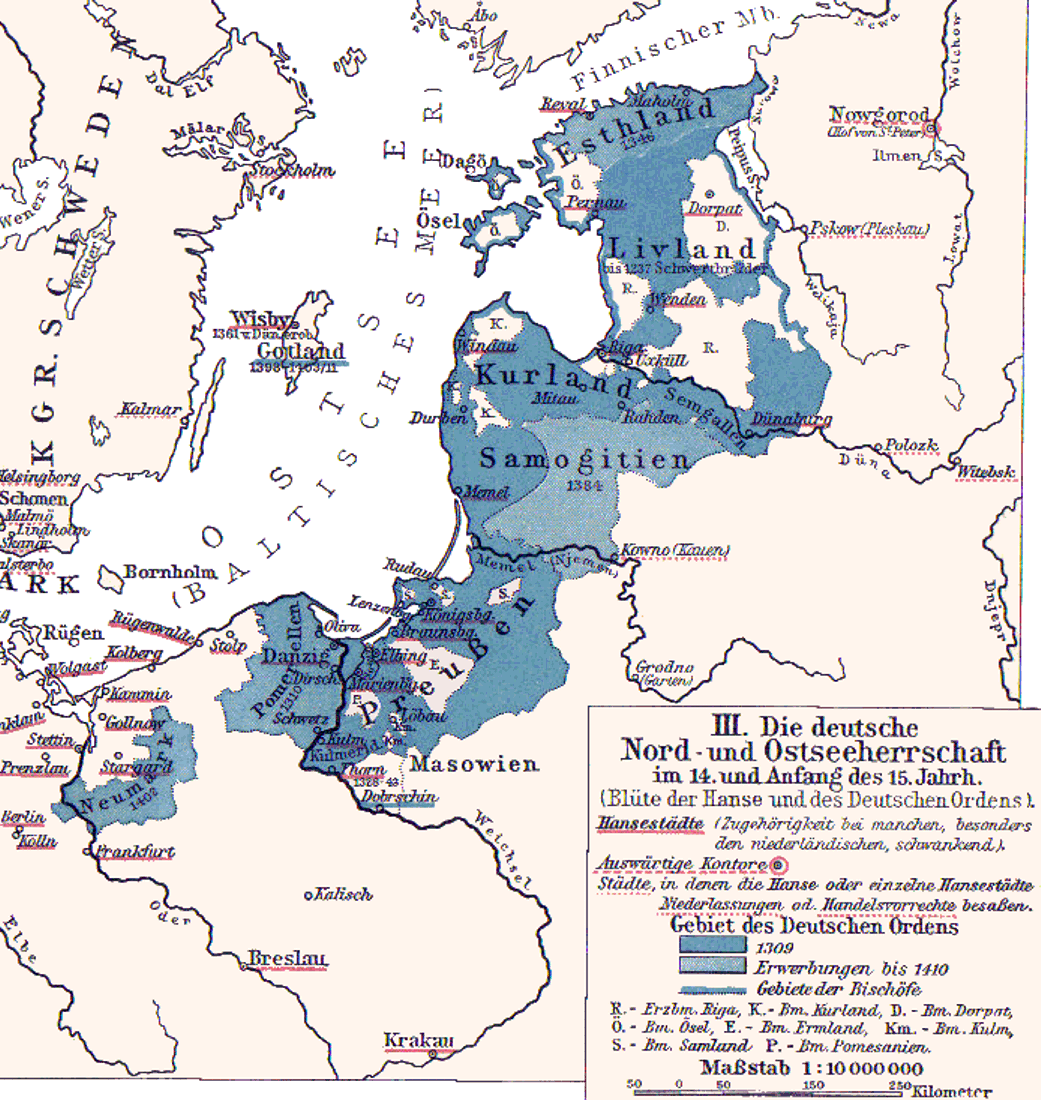 The Teutonic Order State c.1400. Prince-Bishoprics of Ermland, Samland and Pomesania are the little islands in white. East Prussia extended to above the River Memel. 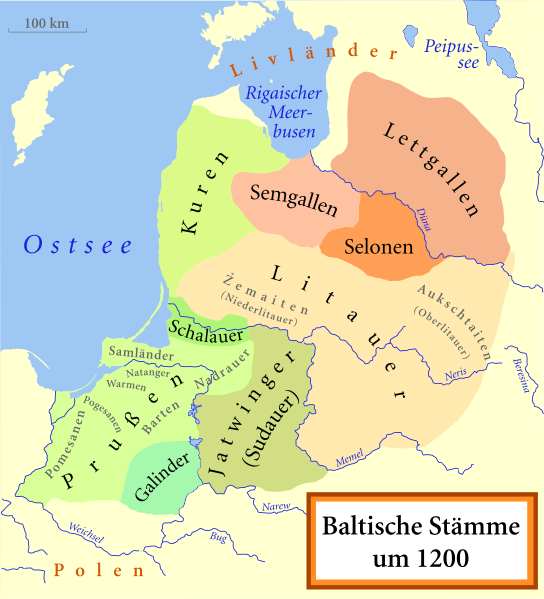 East Prussia enclosed the bulk of the ancestral lands of the Old Prussians, a non-Slav Baltic people of the Indo-European family[3], whose language had become almost extinct by the 18th century. At the beginning of the 1200s the native Prussians were pagan scattered marauding tribes who were constantly raiding the northern parts of the Duchy of Mazovia. Its Duke Conrad had taken part in an unsuccessful crusade against the Prussians in 1222-3. His main aim, however, was to subjugate other dukes with a view to becoming possessor of Cracow and thus the senior prince of those domains with Polish rulers.

Unable to cope with the Prussians at his back, he invited assistance from the military religious Order of the Teutonic Knights. By doing this he merely followed the example of other East European rulers: the Templars and Hospitallers were already established east of the Oder, and even the Spanish Order of Calatrava held lands near Danzig by this date.

The Teutonic Knights sent a detachment to the Vistula in 1229, but having recently had bad experiences in Hungary, whose ruler had betrayed them, they now wanted whatever they conquered. Conrad was quick to agree, giving them the province of Chelmno as a sweetener, and guaranteeing future conquests of the Order to them (not that they were his to offer!). This was also ratified by the Emperor Frederick II. Thus the Teutonic Knights had several advantages which their precursors had lacked. First, they entered Prussia with a free hand.

The Bull issued at Rimini by Frederick, the charter sealed on the bridge at Kruszwica by the Duke of Mazovia, and the Bulls of Pope Gregory IX, all guaranteed that the Order's activities were legally confirmed by the highest possible authorities in Europe. In addition the Order was overwhelmed with assistance: in 1232-3 knights arrived from across Europe. Also, in 1245, Pope Innocent IV granted full indulgences to all who went to Prussia to crusade with the Order.[4]

The indigenous Balts who survived the Northern Crusades were gradually converted to Christianity. Because of Germanization and colonisation over the following centuries, Germans became the overwhelming dominant ethnic group. 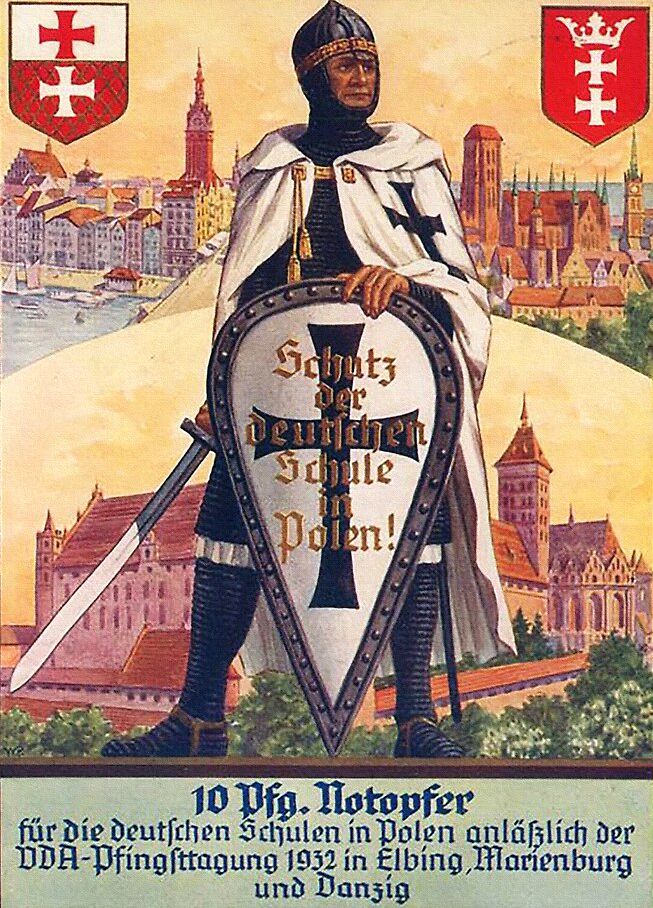 From the 13th century on, Prussia became the theocratic state of the Teutonic Order.[5] Following the Battle of Tannenberg in 1410 and the subsequent imposed Treaty of Thorn (1 Feb 1411), Poland & Lithuania exacted concessions from the Order in parts of West and East Prussia and imposed harsh financial reparations. The Order's new Grand Master, Henry von Plauen, in no time restored the Order's fortunes and became an increasing threat, which led to the formal personal Union of the Polish and Lithuanian Crowns on 2 October 1413.

The Holy Roman Emperor, Sigismund von Luxemburg, King of Bohemia, needed more than ever the support of the Empire and of German public opinion, and therefore was not prepared to abandon the Teutonic Order. Without even hearing the arguments of the Polish representatives sent to him at Breslau in the first days of 1420, he simply confirmed the Treaty of Thorn including both the Truce, and the provision that Samogitia should return to the Order after the deaths of King Jagello of Poland and Grand Duke Vitold of Lithuania.

In the summer of 1422 Poland & Lithuania reopened hostilities against the Order, who lost only one of their castles despite the size of the forces against them, and the war ended in a compromise, including the permanent loss of Samogita - which had a short shoreline with the Baltic above Memel-land and now separated East Prussia from Kurland.[6]

The imposed Second Treaty of Thorn was in 1466, whose harsh provisions settled the fate of Prussia for the forseeable future. The Teutonic Order were deprived of their sovereignty of Prussia and were obliged to recognise the King of Poland as their feudal overlord and pay homage as required, although it remained under the Order's governance. Royal or West Prussia, Elbing, Marienburg, Culmland, and the autonomous Bishopric of Ermland, were annexed by Poland (in the case of the Bishopric only as its overlord). Danzig became an autonomous protectorate in personal union with the King of Poland.

British historians Sir J.A.R. Marriott and Sir Charles G. Robertson remarked: "the best half of what German soldier, priest, missionary and trader had won had passed to the Pole, who thrust a solid wedge of Slav territory between the still German eastern half [of Prussia] and the Germany of the basin of the Oder. Over the glories of Marienburg, the wealth of Danzig, and the fortress of Thorn, guarding the Vistula, no longer flew the Black Cross with the Imperial Eagle."

In 1511 Albert von Hohenzollern, Margrave of Brandenburg-Ansbach, was elected the new Grand Master of the Teutonic Order. He ignored the pleas of the Pope, and took Martin Luther's advice by taking a wife, secularising the Order, and turning Prussia into a secularised Duchy in 1525. Meanwhile, between 1519–1521 Königsberg was unsuccessfully besieged by Polish Forces. In 1618 the Duchy became indissolubly united under the next Duke, Joachim von Hohenzollern, Elector of Brandenburg.

By the 1656 Treaty of Königsberg the Polish King was finally deprived of any sovereign feudal rights over Prussia he had acquired in the imposed 15th century treaties, and by the Treaty of Labiau in the same year the Hohenzollern dynasty finally recovered the sovereignty of Prussia and Ermland.

On May 4, 1660, the Treaty of Oliva, just outside Danzig, came into effect, one of the peace treaties ending the Second Northern War (1655-1660) involving Sweden, Russia, Poland etc. In one of the most critical clauses King Johann II Casimir of Poland confirmed the complete political independence of the Duchy of Prussia from the Polish-Lithuanian Commonwealth. At Königsberg the Elector of Brandenburg, as Duke of Prussia, henceforward ruled as a sovereign with a European position of stature.[7]

This treaty gave Friedrich Wilhelm I (der Große Kurfürst, or the "Great Elector" - ruled from 1640 until his death in 1688) and Prussia a strong position in the post-Westphalian political order of north-central Europe, setting Prussia up for elevation from duchy to kingdom, achieved under his son and successor, Friedrich I of Prussia, and as the duchy was outside the Holy Roman Empire, the Prince-electors of Brandenburg were able to proclaim themselves Kings in Prussia in 1701 (→ Kingdom of Prussia).

Approximately one-third of East Prussia's population and the last speakers of Old Prussian died in the plague and famine of 1709-1711.[8][9]

Following the First Partition of Poland in 1772 and the dissolution of the Polish-Lithuanian Commonwealth, eastern parts of West Prussia (so-called Royal Prussia) were restored to Prussia and all the territory of the whole Duchy of Prussia reorganized, and incorporated into the province of East Prussia the following year.

Between 1829 and 1878, East Prussia was joined with West Prussia to form the Province of Prussia. The Kingdom of Prussia became the leading state of the German Empire after the Imperial creation in 1871. 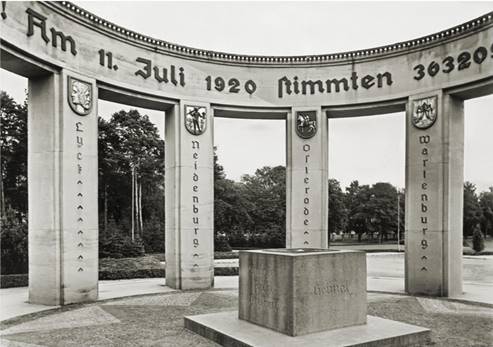 The Memorial to the famous 1920 Plebiscite in Allenstein

Following World War I, the liberal plutocratic Western Allies, in the Treaty of Versailles, separated the province of East Prussia from the rest of Germany by awarding the notorious Polish Corridor to Poland. In addition, in January 1923 Lithuania illegally annexed Memelland, the northern part of East Prussia (returned to Germany in March 1939). Poland also demanded that they be awarded the county of Allenstein, without a vote, because over the centuries ethnic Poles had migrated into this southern county for the stability it offered compared to Poland. The Western Allies, however, in 1920, held a plebescite under military supervision in the city and entire county of Allenstein. 97.5% of the population in a free, fair and secret vote, cast their votes to remain in Germany. 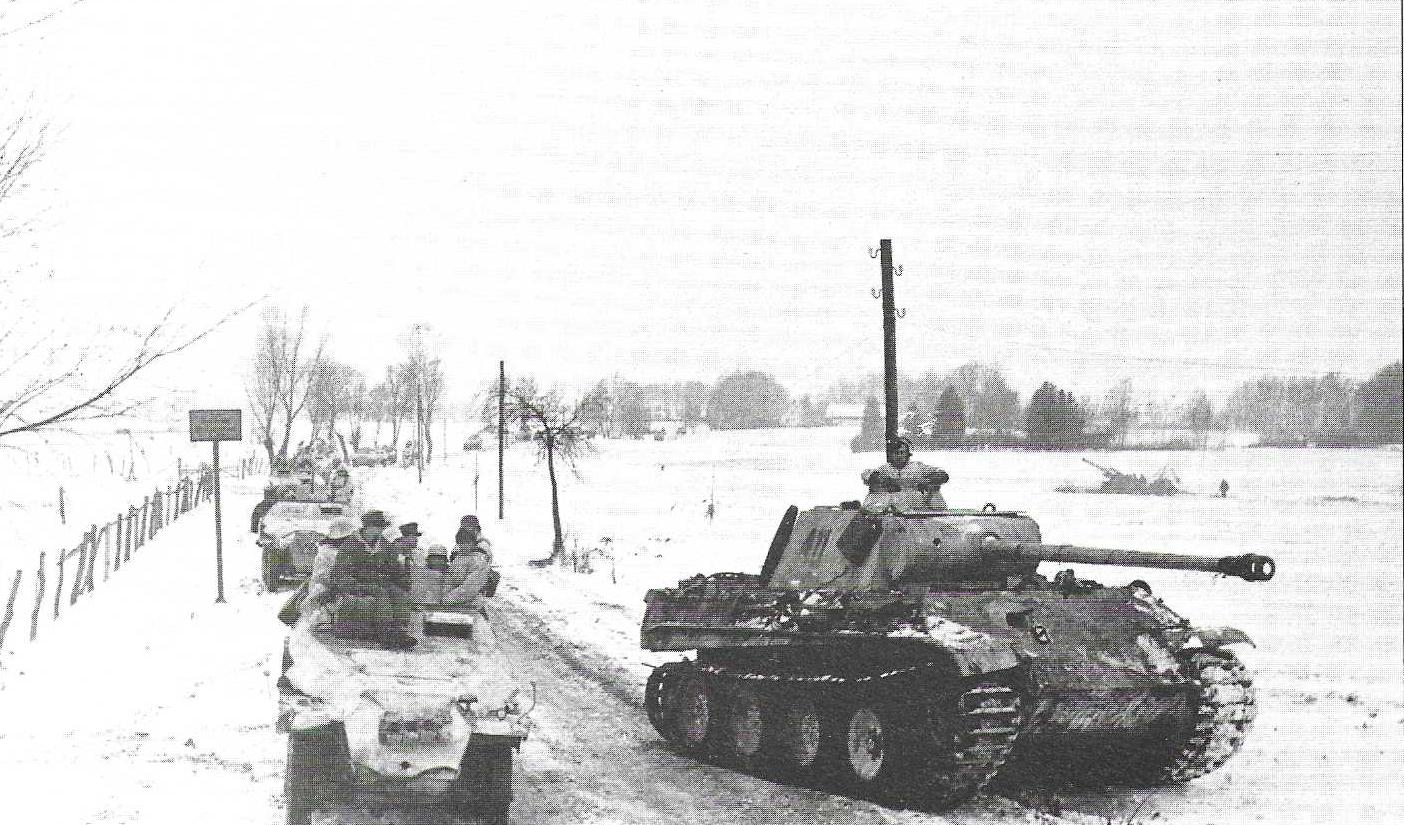 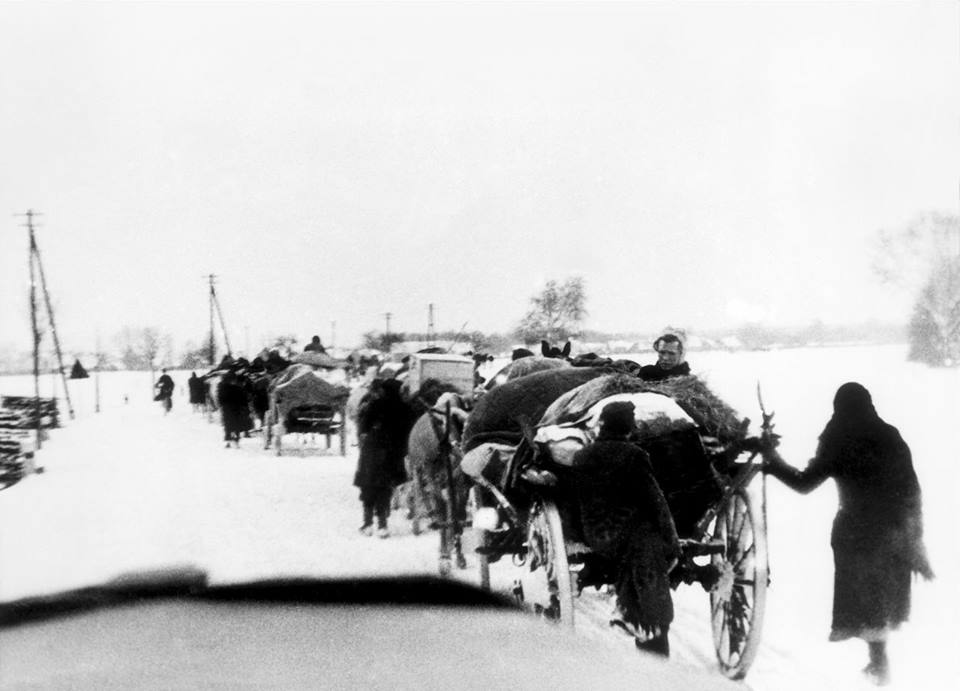 In January 1945 the Soviet Union's Red Army invaded East Prussia, committing terrible atrocities (de) along the way, and many of the German population of the province began to flee west, their columns straffed by Soviet fighter planes. If captured they were usually murdered by the Soviet soldiers. Thousands died when ships evacuating them west were deliberately bombed or torpedoed by the Soviets, one example being the Karlsruhe, another the General von Steuben, both ships leaving from Pillau. In addition the Soviets transported thousands of people to Siberian Labour camps, where most perished.

Following Germany's defeat in World War II in May 1945, the province was partitioned by the Soviet Union, the northern enclave becoming their Kaliningrad Oblast, with the largest part going to their communist Polish People's Republic becoming the Warmian-Masurian Voivodeship (Government district); the Memelland was again awarded to the communist Lithuania. The East Prussian capital of Königsberg was renamed Kaliningrad (after Mikhail Kalinin, a factional ally of Stalin) by the Soviet Union in 1946.

The remaining German population were brutally expelled by the communists, both Soviets and Poles in 1945–47. Thousands died in this outrage and the remainder were expelled. They were replaced in their homes, farms and towns by Poles.[10][11][12][13]

The multi-award-winning three-hour German television faction film Die Flucht (The Flight) which starred Maria Furtwängler in the role of Lena, Gräfin (Countess) von Mahlenberg, leaving her aristocratic father in his centuries-old family estate, which he refused to leave, and leading a small convoy of refugees from East Prussia fleeing the advancing Red Army in the winter of 1944/45. In a tragic scene, as the Red Army approached the doors of the manor, the old Count sat calmly down in his Great Hall and shot himself.[14] When first broadcast by ARD in two parts, on 4 and 5 March 2007, it drew 13.5 million viewers.[15]

The film was controversial for portraying German war-time suffering, including during the flight of those who fled East Prussia (although a number of fictitious 'atrocities' were also shown). It led to adverse comment from a foreign-policy adviser to the President of Poland at the time, fearful of potential German claims to the lands or property in East Prussia stolen by Poland in 1945. There have also been multiple adverse reactions from Poland to other movies about the war, and also to the new museum in Berlin dedicated to the civilians mistreated and expelled (and/or murdered) from the eastern German provinces.[16][17][18]