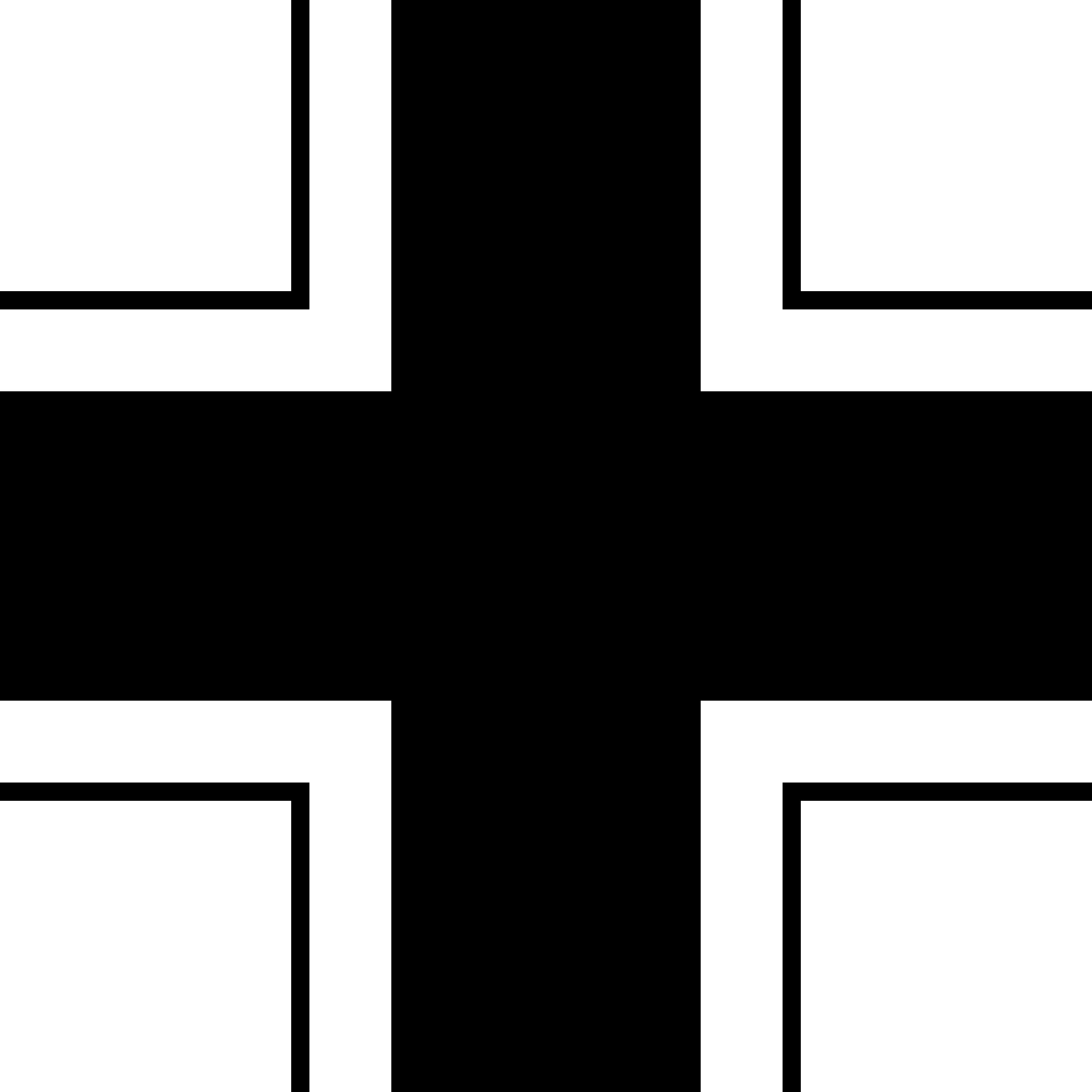 Balkenkreuz (an alternative version of the Iron Cross), the emblem of the Wehrmacht, which officially superseded the Reichswehr on 15 October 1935 in accordance to the Gesetz für den Aufbau der Wehrmacht ("Law for the construction of the Wehrmacht") from 16 March 1935.

Wehrmacht (in English: "armed forces", literally "defence power") was the name of the unified armed forces of Germany from 1935 to 1945. The Wehrmacht consisted of the Heer (army), the Kriegsmarine (navy) and the Luftwaffe (air force). The Waffen-SS, an initially small paramilitary section of Heinrich Himmler's Allgemeine SS that grew to nearly a million strong during World War II, was not part of the Wehrmacht, but subject to its Supreme Command.

Before the rise of the NSDAP, the term Wehrmacht was used in a generic sense to describe armed forces of any nation, being utilized as the "home defense" version of the more general Streitmacht. For example, the term Britische Wehrmacht would identify the British armed forces. Article 47 of the Weimar Constitution of 1919 declared "Der Reichspräsident hat den Oberbefehl über die gesamte Wehrmacht des Reiches" (meaning: "The Reichspräsident holds supreme command of all armed forces of the Reich"). To make a distinction, the term Reichswehr was commonly used to identify the German armed forces.

In 1935, the Reichswehr was renamed Wehrmacht. After World War II and under the Allied occupation of Germany, the Wehrmacht was abolished. When West Germany remilitarized in 1955, its newly-created armed forces became known as the Bundeswehr ("Federal Defence Force"). East Germany's armed forces, formally established in 1956, were known as the National People's Army (Nationale Volksarmee). When East Germany (the German Democratic Republic) was incorporated into "West Germany" (the Federal Republic of Germany) in 1990, much of the Volksarmee property and some of the staff were also incorporated into the Bundeswehr.

Hence the term Wehrmacht customarily refers to Germany's armed forces during the WWII Germany era and, both in German and English. Note: It is incorrect to equate Wehrmacht with only the army (Wehrmacht Heer). Wehrmacht vehicles used by Heer, Luftwaffe or Kriegsmarine had license plates with WH, WL or WM. 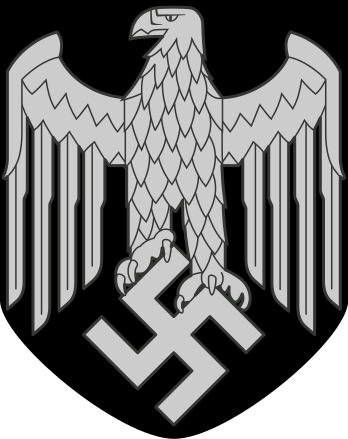 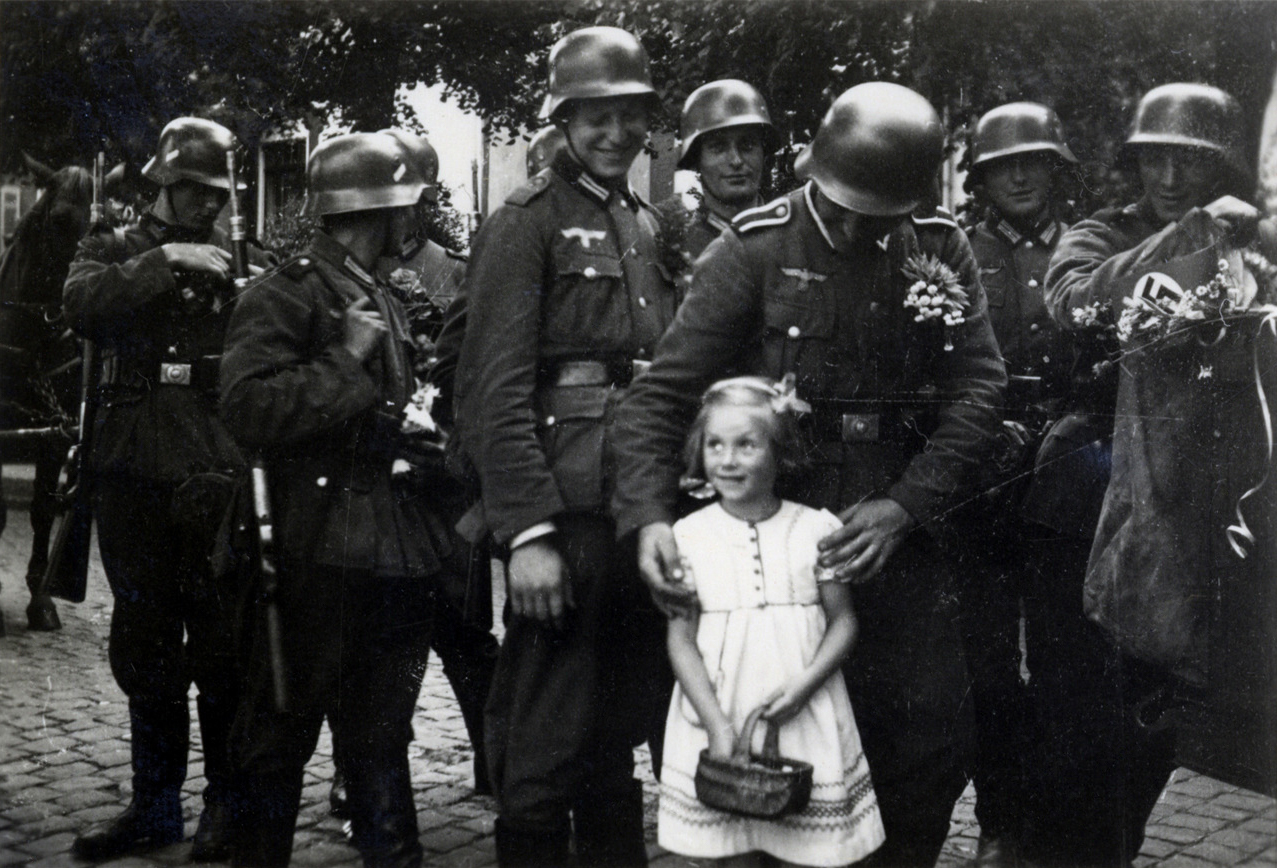 Girl gives flowers to the soldiers in uniform headed for the Western Front. 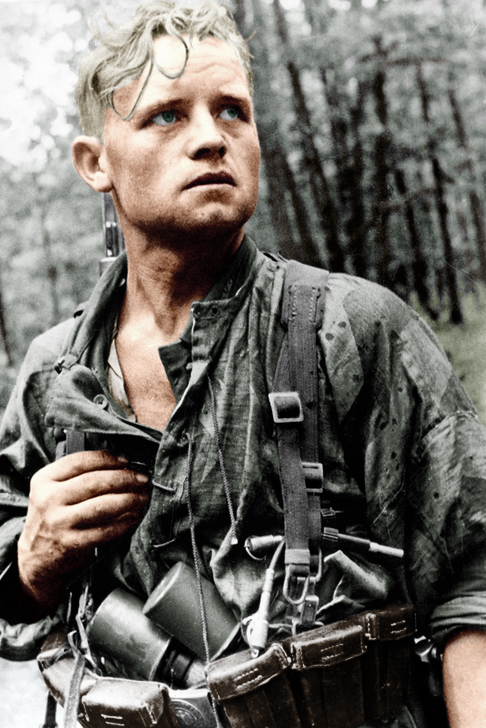 A young soldier of the German Wehrmacht after a combat operation on the Eastern Front near Oryol, 1943. 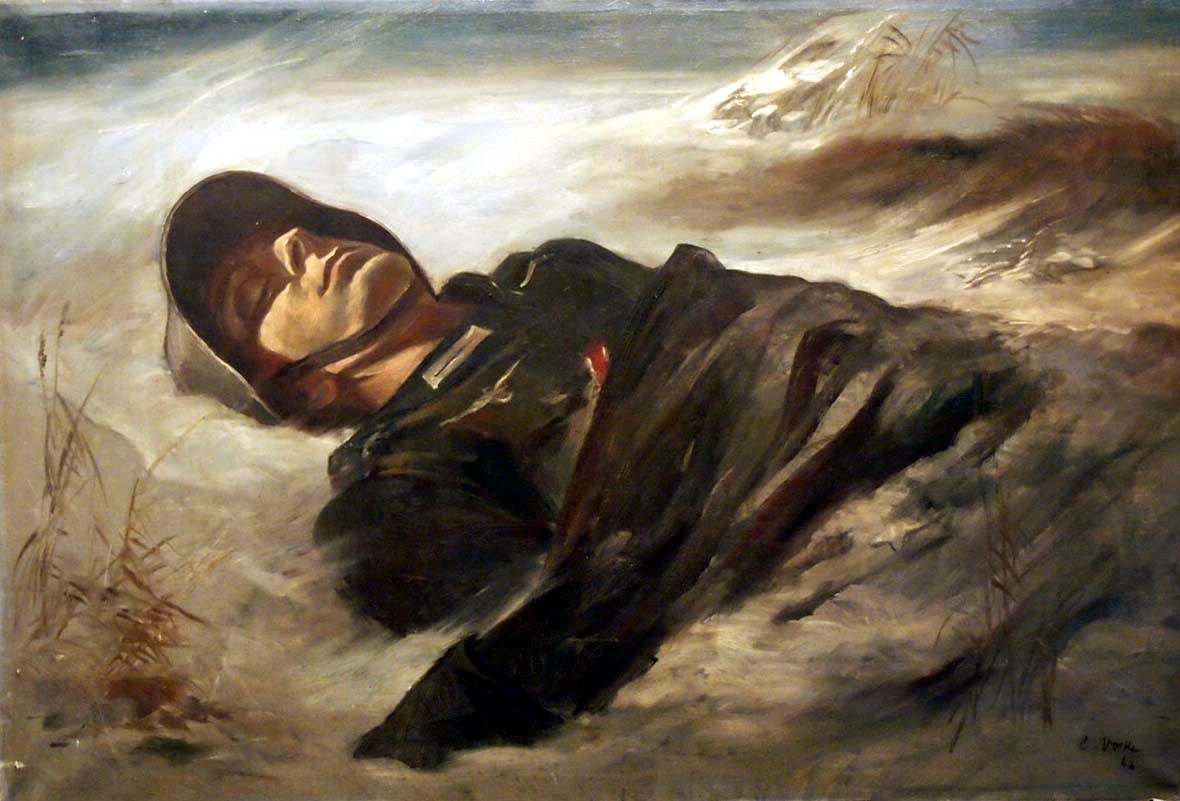 After the World War I armistice of November 11, 1918, the German armed forces were dubbed the Friedensheer (peace army) in January 1919. In March the Reichstag passed a law founding a 420,000 strong preliminary army as the Vorläufige Reichswehr. The terms of the Treaty of Versailles were announced in May, and in June, Germany was forced to sign it. The terms imposed severe constraints on the size of Germany's armed forces. The army was limited to one hundred thousand men with an additional fifteen thousand in the navy. The fleet was to consist of a maximum of six battleships, six cruisers, and twelve destroyers. Submarines, tanks and heavy artillery were forbidden, and the air force was entirely dissolved and conscription abolished. A new post-war force, the Reichswehr, was established on 23 March 1921.

The German government immediately began covertly circumventing these conditions. A secret collaboration with the Soviet Union began after the treaty of Rapallo. Major-General Otto Hasse traveled to Moscow in 1923 to further negotiate the terms. Germany assisted the Soviets with some industrialization, and Soviet officers were to be trained by German officers. German tank and air force specialists would be able, in return, to exercise in the Soviet Union, and German chemical weapons research and manufacture could be carried out there along with other projects. Around three hundred German pilots received training at Lipetsk, and some tank training took place near Kazan. It has been said that toxic gas was developed at Saratov for use by the German army, although there is no evidence of this.

After the death of President Paul von Hindenburg on August 2, 1934, the German Chancellor Adolf Hitler assumed the office of Reichspräsident, and thus became Commander-in-Chief. All officers and soldiers of the German armed forces now had to swear a personal oath of loyalty to their Führer (leader). Germany now proceeded to openly flout the military restrictions imposed upon them in the Versailles Treaty, and conscription was reintroduced on 16 March 1935. While the size of the standing army was to remain at about 100,000 men, as decreed by the treaty, a new group of conscripts equal to this size would receive training each year. The conscription law introduced the name Wehrmacht, so this could be regarded as its founding date. Their insignia was a simpler version of the Iron Cross (the straight-armed so-called Balkenkreuz or beamed cross) that had been used as an aircraft and tank marking in late World War I. The Wehrmacht was officially and formally pronounced on October 15, 1935.