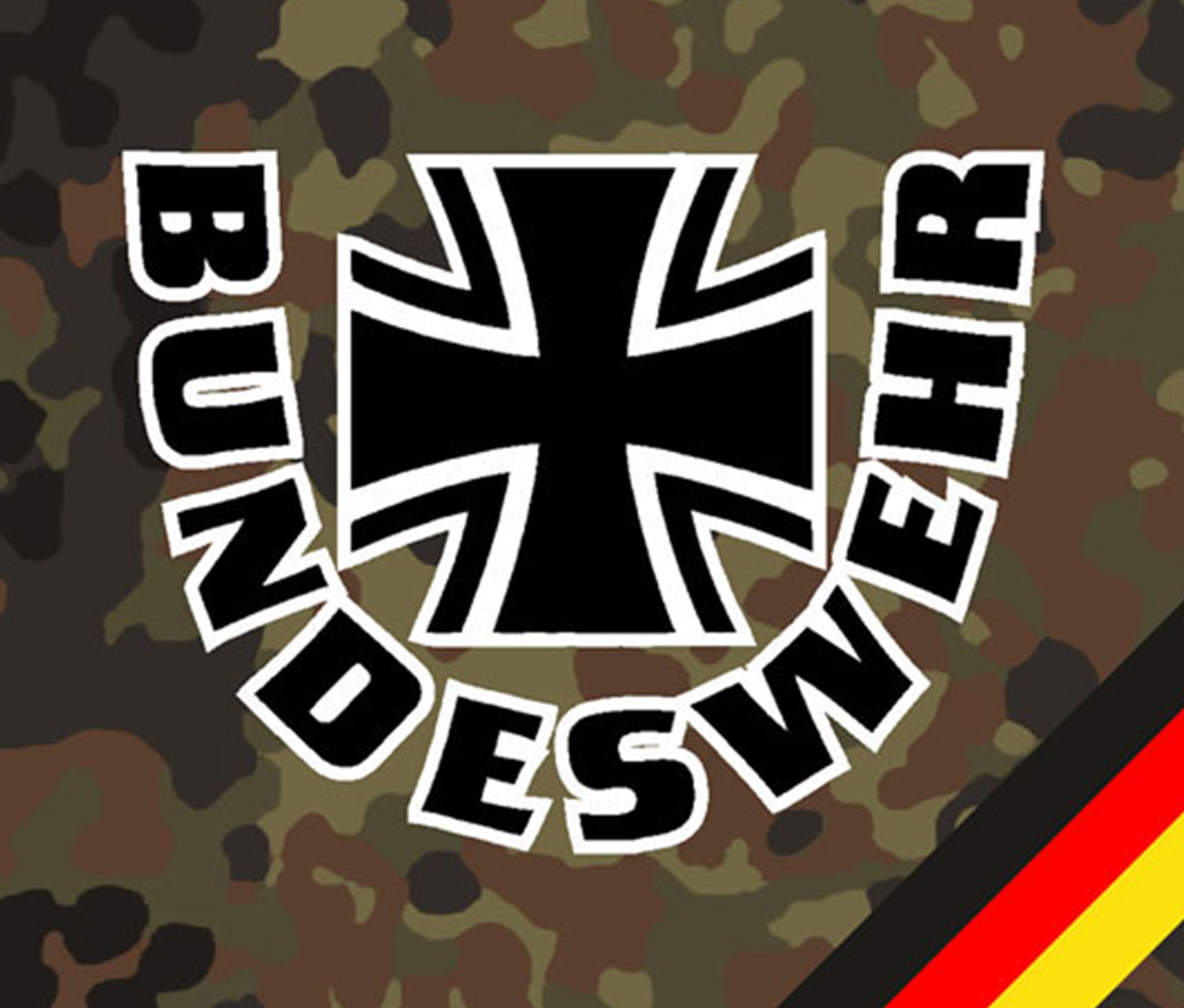 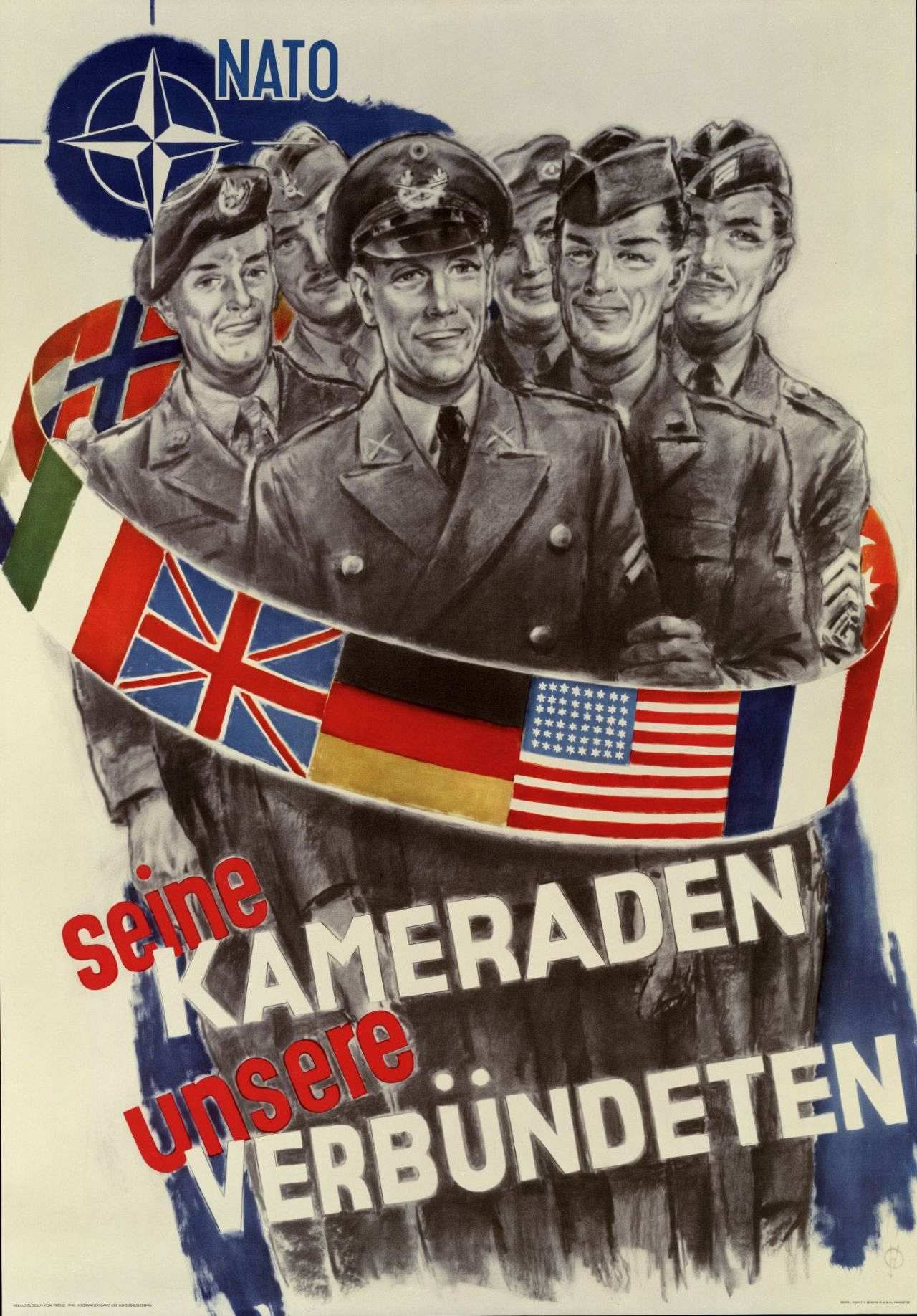 Bundeswehr poster advertising for the acceptance of NATO membership in 1955 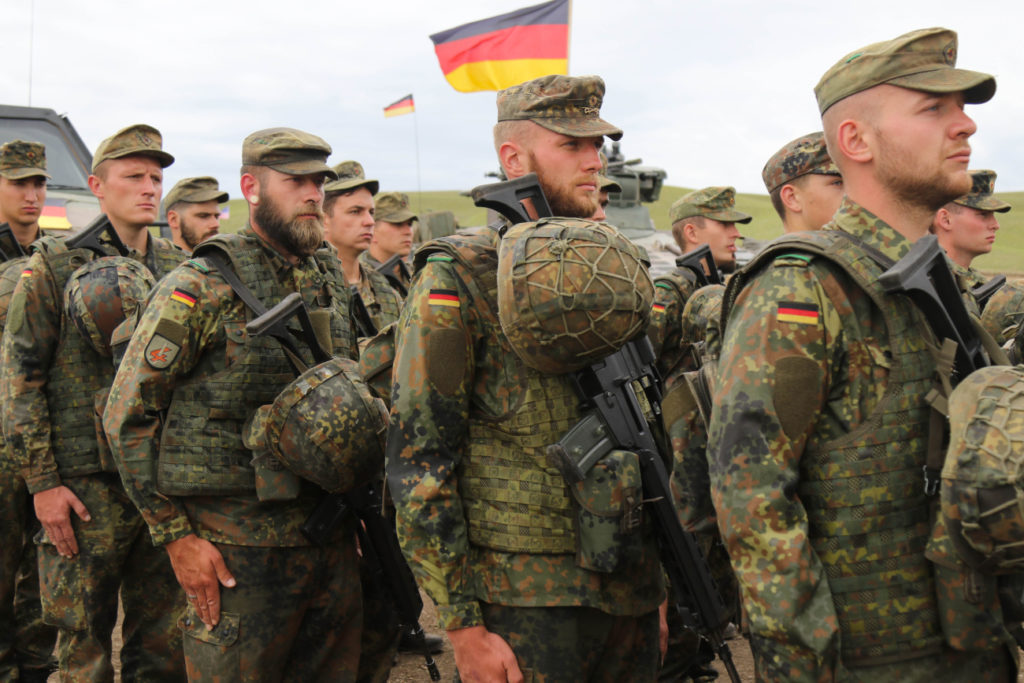 German soldiers of the Bundeswehr

The Bundeswehr (BW) was created on 12. November 1955 with support through the western allies, celebrating the 200th bithday of the famous military theorist Generalleutnant Gerhard Johann David von Scharnhorst (1755–1813). It is made up of army (Deutsches Heer), navy (Deutsche Marine) and air force (Deutsche Luftwaffe). Later expanded through the addition of the Joint Support Service, the Joint Medical Service and the Cyber and Information Domain Service.

About 40.000 NCOs and officers, who had once served in the Imperial German Army, the Freikorps, the Reichswehr and the Wehrmacht, were the core of the new Bundeswehr. 714 (other sources indicate 674 or even 805) were recipients of the Knight's Cross of the Iron Cross. 117 of them were generals and admirals. Major of the Luftwaffe and later Oberst of the Bundeswehr Erich Alfred Hartmann, the greatest flying ace of history, was important for the development of the new Luftwaffe.

The Bundeswehr absorbed the East German Nationale Volksarmee (NVA) in 1990 after the Soviet-controlled country in central Germany, the German Democratic Republic, collapsed together with the Soviet Union and the German partial unification took place.

The Bundeswehr, as some German believe, was not created to protect the interest of the Germans citizens (as was the Wehrmacht), but to support the USA, Israel, and other states on their military campaigns in the Middle East. The Federal Republic of Germany, like the United States, also gives armament for free to Israel, specially modern and highly effective submarines.

Germany "sold" or donated submarines to Israel which are the most expensive vehicles of the armed forces of that terrorist country. Altogether are five Dolphin class submarines capable of carrying nuclear warheads. The first two units were completely donated by the government of the Federal Republic of Germany and the third was sold for half the price.[1]

The other two remaining units, that would cost 1.3 billion euros, were delivered and a third of the amount paid by German taxpayers.[2]. Israel still wants to "buy" a sixth unit, but wants Germany to make bigger discount on the price of the submarine[3]