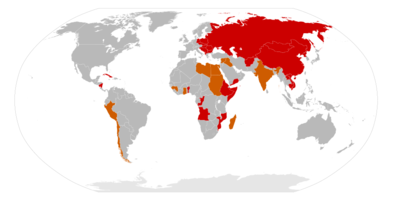 Countries that had Communist governments in red, and countries that the USSR believed at one point to be "moving toward socialism" in orange. Not all of the bright red countries remained Soviet allies.

The Soviet Union, short for the Union of Soviet Socialist Republics (U.S.S.R.), was the first major Communist dictatorship in the world, in Russia, after the Russian Revolution (1917), and lasted until its disintegration, or implosion, in 1991.

During its existence they murdered 66 million of their own citizens, including 200,000 members of the Christian clergy, and destroyed 40,000 churches.[1]

Flag of the Soviet Union

It is notorious for the largest atrocities and mass killings in human history (until Mao's Red China), under the leaderships of Lenin, Trotsky, and Stalin. Hungary’s Regent, Admiral Horthy, wrote to twenty-three heads of state in October 1932, on the possibilities of joining forces against the Soviet Union, which he described as "a dangerous purulent abscess on the body of mankind". In his letter he said that "for fifteen years Soviet Russia has been conducting a war of extermination", clear evidence that European leaders knew the full nature of Bolshevism.[2]

The Soviet Union also supported Communist revolutionary cells and activities in many other countries, and during World War II conquered Eastern Europe, imposing Communist dictatorships and terror in those countries. The most notable "export" of its evil political ideology was to Red China.

The borders of the Soviet Union varied, mainly due to the Russian Civil War, and World War II. The dissolution of the Soviet Union created many new countries, with the largest one, Russia, assuming the responsibilities and rights of the old Soviet Union under international treaties, such as being a permanent member on the United Nations Security Council.

The Bolshevik Revolution and some of its aftermath represented, from one perspective, Jewish revenge. During the heyday of the Cold War, American Jewish publicists spent a lot of time denying that—as 1930s anti-Semites claimed—Jews played a disproportionately important role in Soviet and world Communism. The truth is until the early 1950s Jews did play such a role, and there is nothing to be ashamed of. In time Jews will learn to take pride in the record of the Jewish Communists in the Soviet Union and elsewhere. It was a species of striking back.
—Norman Cantor, The Jewish Experience, 1996.[3]

Under the revolutionary regimes of Lenin and the early Stalin the former majority population of Eastern Slavs (Russians, Ukrainians, White Russians) in their own country were dispossessed and put under the jurisdiction of the prerevolutionary minority peoples (Jews, Georgians, Latvians, Poles, and Armenians). The October Revolution differed substantially from earlier Western revolutions as, for example, when Frenchmen were pitted against Frenchmen in the French Revolution or when Englishmen fought against fellow Englishmen in the American Revolution for the purpose of improving conditions for the less fortunate. In Russia in 1917, international misfits provided much of the leadership for that revolution as part of a world conspiracy to bring down all other governments that did not accept the dictatorial teaching of Karl Marx and his disciples.
—Sergei Semanov, 2012, The Russian Club: Why the Jews Will Not Win.[4]