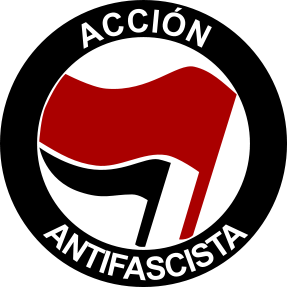 Antifa (Anti-fascist Action) are criminal and violent groups that attack organizations and individuals they claim to be "fascist" or "racist". Many Antifa adherents openly admit that their goal is to deny their opponents freedom of expression and association by using intimidation and violence. 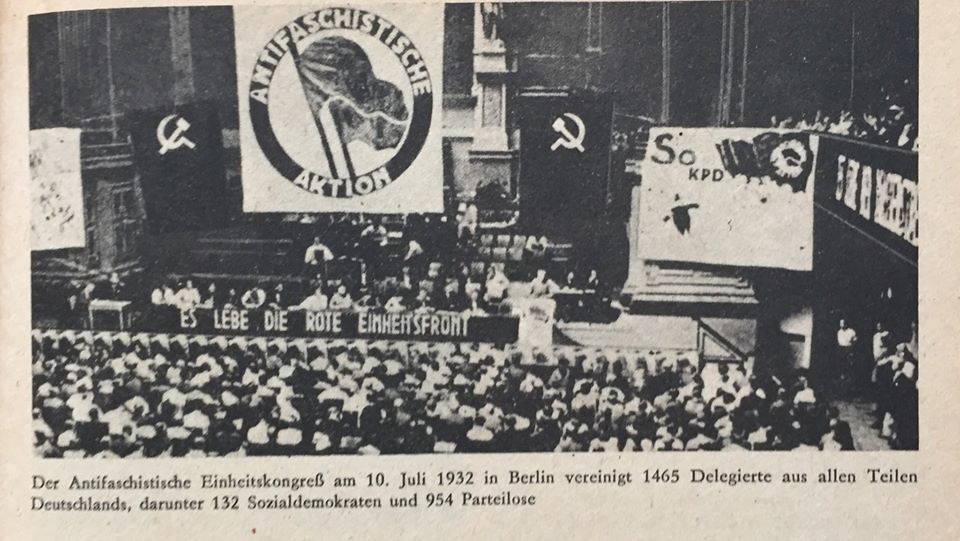 ANTIFA Congress at Neukoln in Berlin in 1932 with over 1600 attendees, amongst whom were 132 members of the Social Democratic Party of Germany.

Antifa was first noted in Germany where they were part of the German Communist Party (KPD). Until 1933 their banner was hung across the facade of the KPD Berlin headquarters. 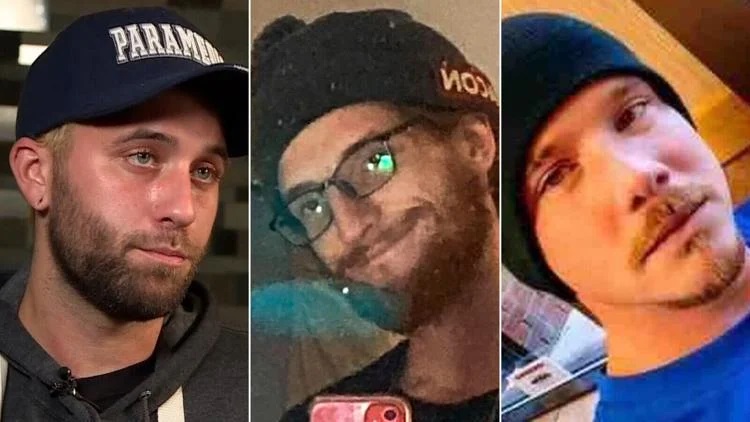 Antifa targets may not even be race realists or nationalists, but simply be critical of the mass immigration or have other less politically correct views. They only attack Whites, never non-Whites, even non-Whites supporting non-White nationalism. There are numerous examples of antifa by mistake criminally attacking wrong targets.

Groups such as Muslims wanting to implement sharia laws are ignored, or even supported, such as by violently attacking marches peacefully protesting against sharia. See also Islamo-leftism and Islamization and anti-Islamization.

Antifa groups also engage in activities such as vandalism of supposed symbols of "White supremacy", such as statues of Christopher Columbus.

Several groups refer to themselves as "Anti-Fascist Action" in the respective language of the countries they operate in with "Action" referring to the euphemism "direct action".

Antifa groups often claim or claimed to be social anarchist or Trotskyist (the latter ideology is likely relatively less popular today than it was previously, such as before the fall of communism). The social anarchist variants are usually loosely organized networks of largely independent groups.

More covert motivations may include thrill-seeking from committing crimes and non-Whites supporting their own perceived group interests by trying to prevent Whites from supporting White interests.

Jewish antifa activists opposing White identity see their activism as an affirmation of and celebrating Jewish identity — both religious and secular.[2] See also Jews and immigration. Another contributing factor is discussed in the "Money" section.

Antifa criminal activities are very often misrepresented and covered-up by politically correct mainstream mass media, which often ignore that the groups often even openly (but anonymously) state their criminal intentions and brag about committed crimes.

Despite their support for violence, antifa groups are rarely censored by, for example, social media websites, unlike non-violent pro-White groups.

One example of this was in late 2017, when Twitter banned non-violent pro-White groups, but did not ban antifa groups openly supporting and committing criminality and violence.[3]

Leftist Wikipedia has been criticized for repeated editing on the Antifa article by leftists, self-proclaimed antifa supporters, and/or prominent members of the Wikipedia bureaucracy in order to downplay or censor mentioning antifa use of violence, antifa terrorism categorization, and other negative aspects.[4][5] Criticisms have continued, including on various forms of censorship and cover-ups, double standards, and various other problems.[6][7][8][9][10] 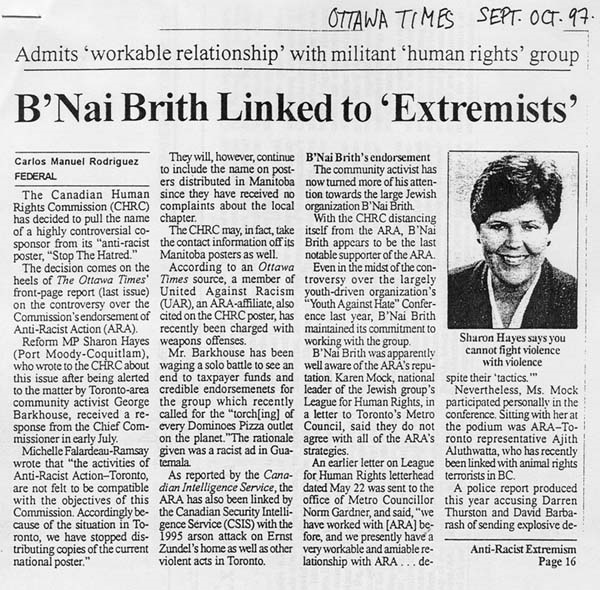 An article from 1997 in The Ottowa Times documenting Jewish B'nai B'rith connection to ARA Toronto.[11]
See the article on the Tinley Park attack on SPLC support.

One example is that antifa individuals and groups in the United States have in various ways attacked Immigration and Customs Enforcement (ICE) officers and buildings, such as

"On July 12, anti-ICE protesters trespassed at a detention center, desecrated an American flag and raised the Mexican flag. On July 13, self-described “anti-fascist” Willem Van Spronsen attacked an ICE facility and was shot to death. The national press mostly ignored the story; Spronsen’s group had received earlier favorable news coverage. The attack encouraged anti-ICE activists, many of whom praised Spronsen’s violence and “martyrdom. [...] Antifa have publicized the names and locations of ICE agents. At a recent protest, an activist threatened an ICE contractor and bragged about knowing where his children live. Earlier this week, police arrested a suspect accused of shooting into an ICE field office in Texas-".[12]

Another association is with various "anti-racist" surveillance organizations/papers where criminal antifa activists may work, gain surveillance information needed for crimes, and/or receive other forms of support. Non-White participants may have associations with organizations supporting the interests of non-Whites and that would be labelled as "White supremacist" if instead being pro-White organizations.

See also Black Lives Matter, on Antifa-related views stated to have contributed to many attacks on and murders of police officers.

In 2017, the New Jersey Office of Homeland Security described antifa as anarchist extremists, citing several examples of violence and incitement to violence.[13]

"Federal authorities have been warning state and local officials since early 2016 that leftist extremists known as “antifa” had become increasingly confrontational and dangerous, so much so that the Department of Homeland Security formally classified their activities as “domestic terrorist violence,” according to interviews and confidential law enforcement documents obtained by POLITICO. [...] Previously unreported documents disclose that by April 2016, authorities believed that “anarchist extremists” were the primary instigators of violence at public rallies against a range of targets. They were blamed by authorities for attacks on the police, government and political institutions [...] “These antifa guys were showing up with weapons, shields and bike helmets and just beating the shit out of people. … They’re using Molotov cocktails, they’re starting fires, they’re throwing bombs and smashing windows.” [...] They claim to have no leader and no hierarchy, but authorities following them believe they are organized via decentralized networks of cells that coordinate with each other. Often, they spend weeks planning for violence at upcoming events [...] At the Sacramento rally, antifa protesters came looking for violence, and “engaged in several activities indicating proficiency in pre-operational planning, to include organizing carpools to travel from different locations, raising bail money in preparation for arrests, counter-surveilling law enforcement using three-man scout teams, using handheld radios for communication, and coordinating the event via social media,” the DHS report said. [...] A senior state law enforcement official said, “A whole bunch of them” have been deemed dangerous enough to be placed on U.S. terrorism watch lists [...] federal officials launched a global investigation with the help of the U.S. intelligence community, according to the DHS and FBI assessment. [...] To determine whether the U.S.-based anarchists might start committing terrorist bombings like their counterparts in “foreign anarchist extremist movements” in Greece, Italy and Mexico, possibly at the Republican and Democratic conventions that summer."[14]

A 2017 White House petition calling on President Trump to officially recognize antifa as a terror group has received over 350,000 signatures. Only 100,000 was required to make it eligible for an official response from the White House.[15]

Leftist extremist groups and activities have been argued to be funded covertly from very wealthy, leftist "respectable foundations to increasingly radical groups until they reach the thugs that mace, club and set fires. The multiple tiers buy their donors respectability and plausible deniability. [...] There is big money behind the street violence tearing apart America from Ferguson to Berkeley. [...] Foundations with billions in assets have become self-perpetuating institutions that grow more radical with each iteration. Their vast wealth and political agendas give them great power. And that power comes with zero accountability. They have built massive networks using their wealth and power to control our political system. And they are even willing to resort to violence to undermine an election."[16]

Involvement in the George Floyd riots

See the article on the George Floyd riots and the external links there.