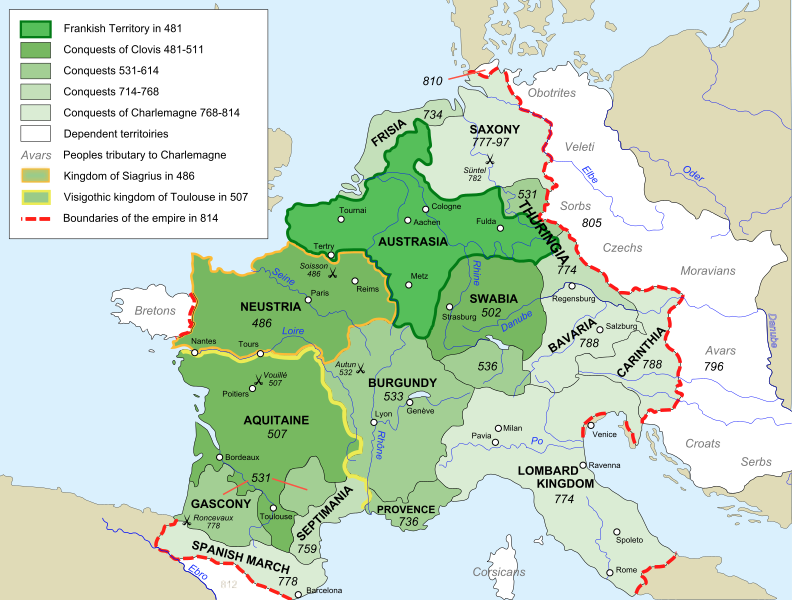 Saxony in Frankia; The history of Saxony began with a small tribe living on the North Sea between the Elbe and Eider River in what is now Holstein. In the third and fourth centuries the Saxons fought their way victoriously towards the west, and their name was given to the great tribal confederation that stretched towards the west exactly to the former boundary of the Roman Empire, consequently almost to the Rhine. Only a small strip of land on the right bank of the Rhine remained to the Frankish tribe. Towards the south the Saxons pushed as far as the Harz Mountains and the Eichsfeld, and in the succeeding centuries absorbed the greater part of Thuringia. In the east their power extended at first as far as the Elbe and Saale Rivers; in the later centuries it certainly extended much farther. All the coast of the German Ocean belonged to the Saxons excepting that west of the Weser, which the Frisians retained. The history of the powerful Saxon tribe is also the history of the conversion to Christianity of that part of Germany which lies between the Rhine and the Oder, that is of almost the whole of the present Northern Germany. From the eighth century the Saxons were divided into the four sub-divisions: Westphalians, between the Rhine and Weser; the Engern or Angrians, on both sides of the Weser; the Eastphalians, between the Weser and Elbe; the Transalbingians, in the present Holstein. The only one of these names that has been preserved is Westphalians, given to the inhabitants of the Prussian Province of Westphalia.[1]

Saxony is today called The Free State of Saxony (German: Freistaat Sachsen [ˈfʁaɪʃtaːt ˈzaksən]) and is today a federal state of the Federal Republic of Germany, located in the eastern part of present-day Germany. It is the tenth-largest German state in area (18,413 km²) and the sixth largest in population (4.3 million), of Germany's sixteen states. It's capital is Dresden. Before 1919 it was a Kingdom and part of the German Empire. 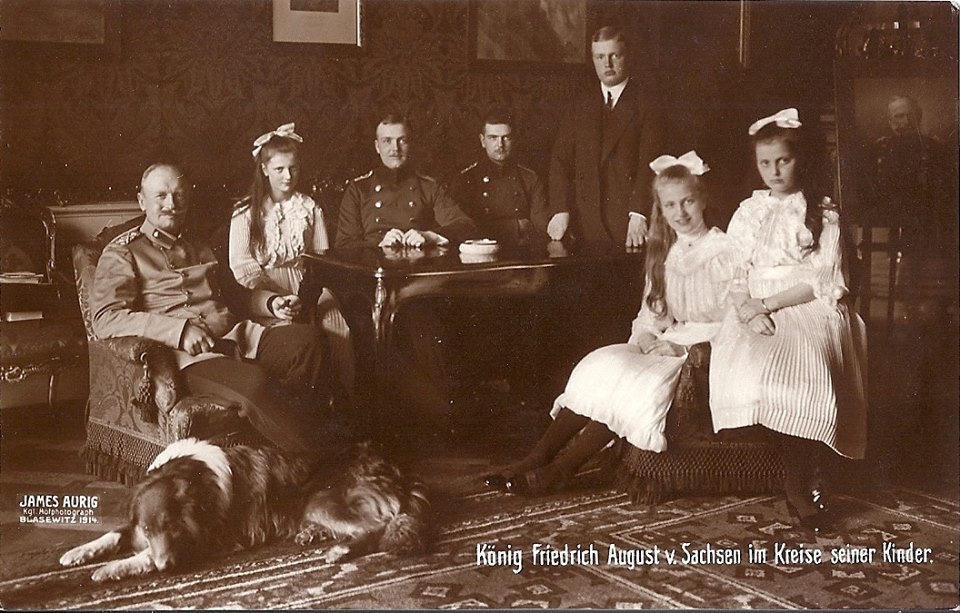 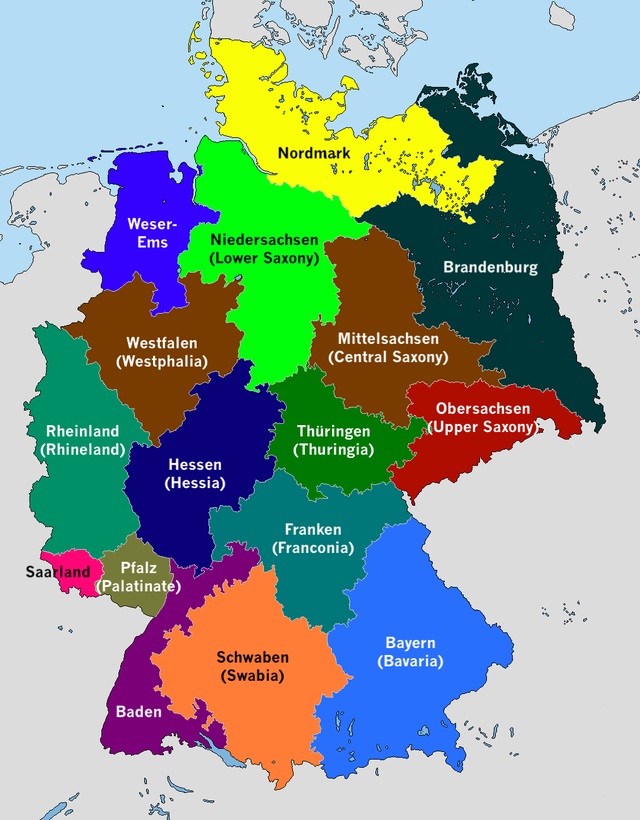 Saxony in the 21st century

North of the Lugii, near the Baltic Sea, Tacitus places the Gothones (Goths), Rugii, and Lemovii. These three Germanic tribes share a tradition of having kings, and also similar arms – round shields and short swords. Ptolemy says that east of the Saxons, from the "Chalusus" river to the "Suevian" river are the Farodini, then the Sidini up to the "Viadua" river, and after these the "Rugiclei" up to the Vistula river (probably the "Rugii" of Tacitus). He does not specify if these are Suevi. On the other hand, Tacitus does clearly consider there to be not only a Suebian region, but also Suebian languages, and Suebian customs, which all contribute to making a specific tribe more or less "Suebian". The Frankish King Clovis I (481-511) united the various Frankish tribes, conquered Roman Gaul, and accepted Christianity. The new Frankish Kingdom was able to bring all the Germanic tribes except the Saxons under its authority and to make them Christian. For more than a hundred years there was almost uninterrupted warfare between the Franks and the Saxons. After a bloody struggle that lasted thirty years (772-804), the Saxons were finally defeated and brought under Frankish supremacy by the Emperor Charlemagne. From the 8th century, the Saxons were divided into four subdivisions (Gaue):

The Western Emperor Karl der Große summoned the Germanic Saxons to a great assembly at Paderborn in 777, where many were forcibly baptized. Possibly the most famous of the Saxons early leaders was Witukund, who, deeply committed to the old pagan ways, now led a rebellion, but was ultimately defeated with over 4,500 of his men being beheaded by the Emperor's command. All of Saxony was now Christianised 'at the point of the sword', with the Emperor dividing it into counties and appointing both Saxons and Franks as Counts. He also arranged for the defence of the Saxon-Slav frontier, for which purpose a force of Austrasians and Saxons was raised.[2] Other equally famous Dukes of Saxony and Holy Roman Emperors were the three Ottos (r.936 to 1002).[3] Saxony had monarchs continuously until the forced abdication of its last King, Friedrich Augustus III (died 18 Feb 1932) following the end of The Great War at the end of 1918.

There’s Upper Saxony, centered on Dresden, in the eastern part of present day Germany, south of Berlin and north of Prague. There’s Lower Saxony, with its capital in Hanover. Hanover used to be the capital of its own state before it was annexed by Prussia in the 19th century. Bremen is the main seaport of Lower Saxony, and the whole state is directly south of Denmark. Lower Saxony, like some other states of modern Germany, includes territories not originally part of “Saxony”.

Over the 1500 years, and more, Saxony has considerably changed its territorial frontiers. In the heart of German-speaking Europe, in the early Middle Ages, Saxony referred to the region occupied by today's states of Lower Saxony and northern North Rhine-Westphalia. Saxony became one of the new easternmost German regions after the border-changes of 1945, which were under Communist rule until 1990/1. The legacy of the state under the Communists' German Democratic Republic still largely defines present-day Saxony.

The term Saxon does not always correlate with Saxony: a Saxon is not necessarily an inhabitant of Saxony (e.g. Saxon people of Germania, Anglo-Saxons or Transylvanian Saxons).