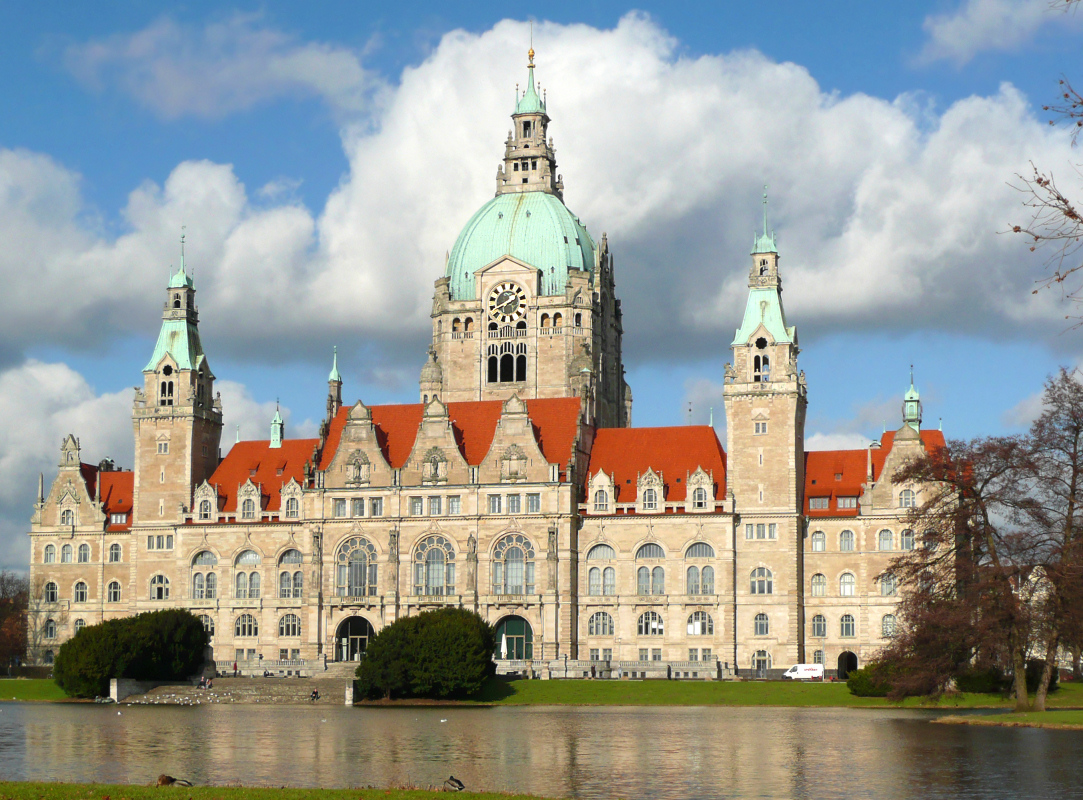 Hanover (German: Hannover) on the river Leine, is the capital of the federal state of Lower Saxony (Niedersachsen), Germany and was once by personal union the family seat of the Hanoverian Kings of Great Britain, in their dignities as the dukes of Brunswick-Lüneburg (which title was later called the Elector of Hanover at the end of the historical period known as Early Modern Europe). After the Napoleonic Wars ended, the Electorate was enlarged and made into the capital of the Kingdom of Hanover. 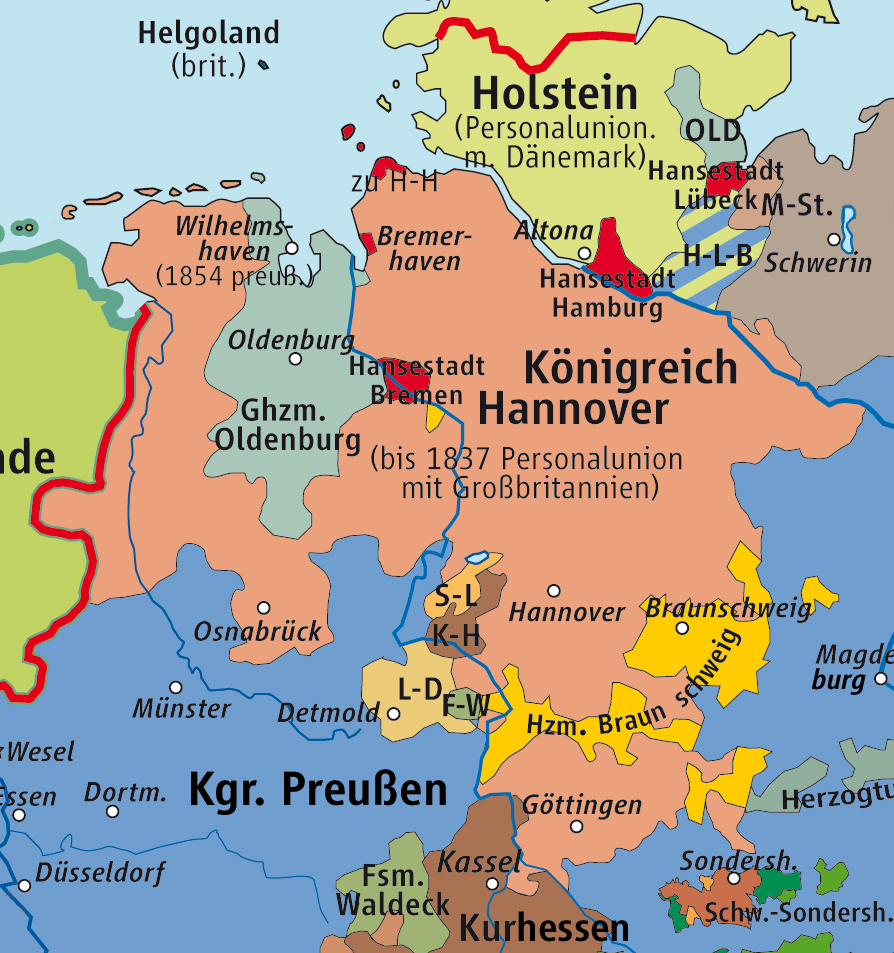 Hanover, German Hannover, former state of northwestern Germany, first an electorate (1692–1806) of the Holy Roman Empire, then a kingdom (1814–66), and finally a Prussian province (1866–1945). After World War II the state was administratively abolished; its former territory formed about 80 percent of the Land (state) of Lower Saxony. Hanover grew out of the early 17th-century division of territories of the Welf house of Brunswick-Lüneburg. Created in 1638 as the principality of Brunswick-Calenberg-Göttingen, it came to be named after its principal town, Hanover. Ernest Augustus I (1630–98), duke from 1680, united the principality with that of Lüneburg, marrying his son George Louis to Sophia Dorothea of Celle, only daughter of George William, duke of Brunswick-Lüneburg; upon the latter’s death in 1705 the two states were formally joined. Ernest Augustus in 1692 had obtained from the Holy Roman emperor Leopold I the designation of his principality as the ninth electorate of the empire, called officially Brunswick-Lüneburg but commonly Hanover.[1]

In 1946, Hanover was revived as a state, named the State of Hanover. The state saw itself in the tradition of the kingdom. Its Prime Minister, Hinrich Wilhelm Kopf, played a central role when the state of Lower Saxony was founded just a few months later by merging Hanover with several smaller states, with the city of Hanover as its capital. The former territory of Hanover makes up 85 percent of Lower Saxony's territory, and the state continues to use the old Hanover coat of arms.

The Kingdom of Hanover (German: Königreich Hannover) was established in October 1814 by the Congress of Vienna, with the restoration of George III to his Hanoverian territories after the Napoleonic era. It succeeded the former Electorate of Brunswick-Lüneburg (known informally as the Electorate of Hanover), and joined with 38 other sovereign states in the German Confederation. The Kingdom was ruled by the House of Hanover, in personal union with the United Kingdom of Great Britain and Ireland until 1837, before being conquered by Prussia in 1866. Briefly revived as the State of Hanover in 1946, the state was subsequently merged with some smaller states to form the current state of Lower Saxony. The territory of Hanover had earlier been a Principality within the Holy Roman Empire; before being elevated into an electorate in 1708. Hanover was formed by the union of several dynastic divisions of the Duchy of Brunswick-Lüneburg, with the sole exception of the principality of Brunswick-Wolfenbüttel. Between 1714 and 1837 it was joined in a personal union, first with the Kingdom of Great Britain and the Kingdom of Ireland, and then, from 1801, with the United Kingdom of Great Britain and Ireland. In 1803 the electorate was occupied by French and Prussian troops, and following the Treaties of Tilsit in 1807, its territories together with territories ceded from Prussia was created into the Kingdom of Westphalia ruled by Napoleon's brother Jérôme Bonaparte. French control lasted until October 1813 when the territory was overrun by Russian cossack troops, and the Battle of the Nations at Leipzig later the same month spelled the definitive end to the Napoleonic client state as well as the entire Confederation of the Rhine, after which the House of Hanover was restored as rulers. The Prince-Electors, formerly vassals within the Holy Roman Empire, were elevated to monarchs of an independent kingdom at the Congress of Vienna in 1814. This was conducted under the supervision and advice of Baron Münster, head of the German Chancery in London. Hanover was also greatly expanded, becoming the fourth-largest state in the German Confederation (behind only Prussia, Austria and Bavaria) and the second-largest in north Germany. During the British Regency and the reigns of the kings George IV and later William, their younger brother Prince Adolphus, Duke of Cambridge officiated as Viceroy of Hanover (1816-37), representing the King usually living in England. When Adolphus's niece, Queen Victoria, daughter of his late elder brother Prince Edward, Duke of Kent and Strathearn, succeeded to the British Throne on 20 June 1837, the 123-year personal union of the crowns of Great Britain (or the United Kingdom of Great Britain and Ireland from 1801, respectively) and Hanover (or the Electorate of Brunswick-Lüneburg before 1814, respectively) ended. Salic law, which requires succession by exclusively male inheritance, operated in Hanover but not in Great Britain; Victoria could not become Queen of Hanover. Adolphus's other elder brother, therefore, became King as Ernest Augustus I of Hanover and Adolphus returned to Britain. During the Austro-Prussian War (1866), Hanover attempted to maintain a neutral position, along with some other member states of the German Confederation. Hanover's vote in favor of the mobilisation of Confederation troops against Prussia on 14 June 1866 prompted Prussia to declare war. The outcome of the war led to the dissolution of Hanover as an independent kingdom and it was annexed by Prussia, where it became the Province of Hanover. The German-Hanoverian Party, which at times supported secession from the Reich, demanded a separate status for the province in the Reichstag. The party existed up until it was banned by the Nazi government. After George V fled Hanover, he raised forces loyal to him in the Netherlands called the Guelphic Legion. They were eventually disbanded in 1870. George refused to accept the Prussian takeover of his realm and claimed he was still the legitimate king of Hanover. His only son, Ernest Augustus, Duke of Cumberland, inherited this claim upon George's death in 1878. Ernest Augustus was also first in line to the throne of Brunswick, whose rulers were distant cousins of the House of Hanover. However, since he still claimed to be Hanover's rightful ruler as well, a regency took over the government of Brunswick until the Duke's son, also named Ernest Augustus, married one of the German Emperor's daughters in 1915 and renounced his claim to Hanover.[2]

The Congress of Vienna instituted a territorial exchange between Hanover and the Kingdom of Prussia, in which Hanover increased its area substantially, gaining the Bishopric of Hildesheim, East Frisia, the Lower County of Lingen and the northern part of the Prince-Bishopric of Münster. It gained territories, partially ruled earlier in personal union, such as the Duchies of Bremen-Verden and partially ruled by others, to whit the County of Bentheim. It lost those parts of Saxe-Lauenburg to the northeast of the Elbe, which was assigned in personal union to Denmark, except the Amt Neuhaus. Further small exclaves in the east were lost.

Hanover thus comprised a number of territories, which had been Imperial Estates within the Holy Roman Empire. Their respective governments, now called provincial governments, were organised according to partially very old traditions, including different levels of estate participation in rule. In 1823 the kingdom was reorganised into high-bailiwicks (German: Landdrosteien, singular: Landdrostei), each led by a high-bailiff (German: Landdrost) according to unitary standards, thus doing away with the inherited provincial peculiarities. The high-bailiwicks were subdivided into bailiwicks (German: Ämter, singular Amt), presided by a bailiff (Amtmann, plural Amtleute). The high-bailiwicks, named after their capitals, were the following:

The Hanoverian subdivisions into high-bailiwicks and bailiwicks remained unchanged until 1 April 1885, when they were replaced by Prussian-style provinces (Regierungsbezirke) and districts (Kreise).

In addition to being the capital of Lower Saxony, Hanover was the capital of the administrative area Regierungsbezirk Hannover (Hanover region) until Lower Saxony's administrative regions were disbanded at the beginning of 2005. It is, however, still part of the Hanover district (Region Hannover), which is a municipal body made up from the former district and city of Hanover.

With a population of 534,049 (31 December 2020; Metro: 1,119,032) the city is a major center of northern Germany, known for hosting annual commercial expositions such as the Hanover Fair and the CeBIT. Every year Hanover hosts the Schützenfest Hannover, the world's largest Marksmen's Fun Fair, and the Oktoberfest Hannover, which is the second largest Oktoberfest in the world. In 2000, Hanover hosted the world fair Expo 2000. The Hanover fairground, due to numerous extensions especially for the Expo 2000, is the largest in the world. Hanover also has regional importance because of its universities and medical school, its international airport, and its large zoo. The city is also a major crossing point of railway lines and highways (Autobahnen), connecting European main lines in east-west-direction (Berlin - Ruhr area) and north-south-direction (Hamburg - Munich et al.).