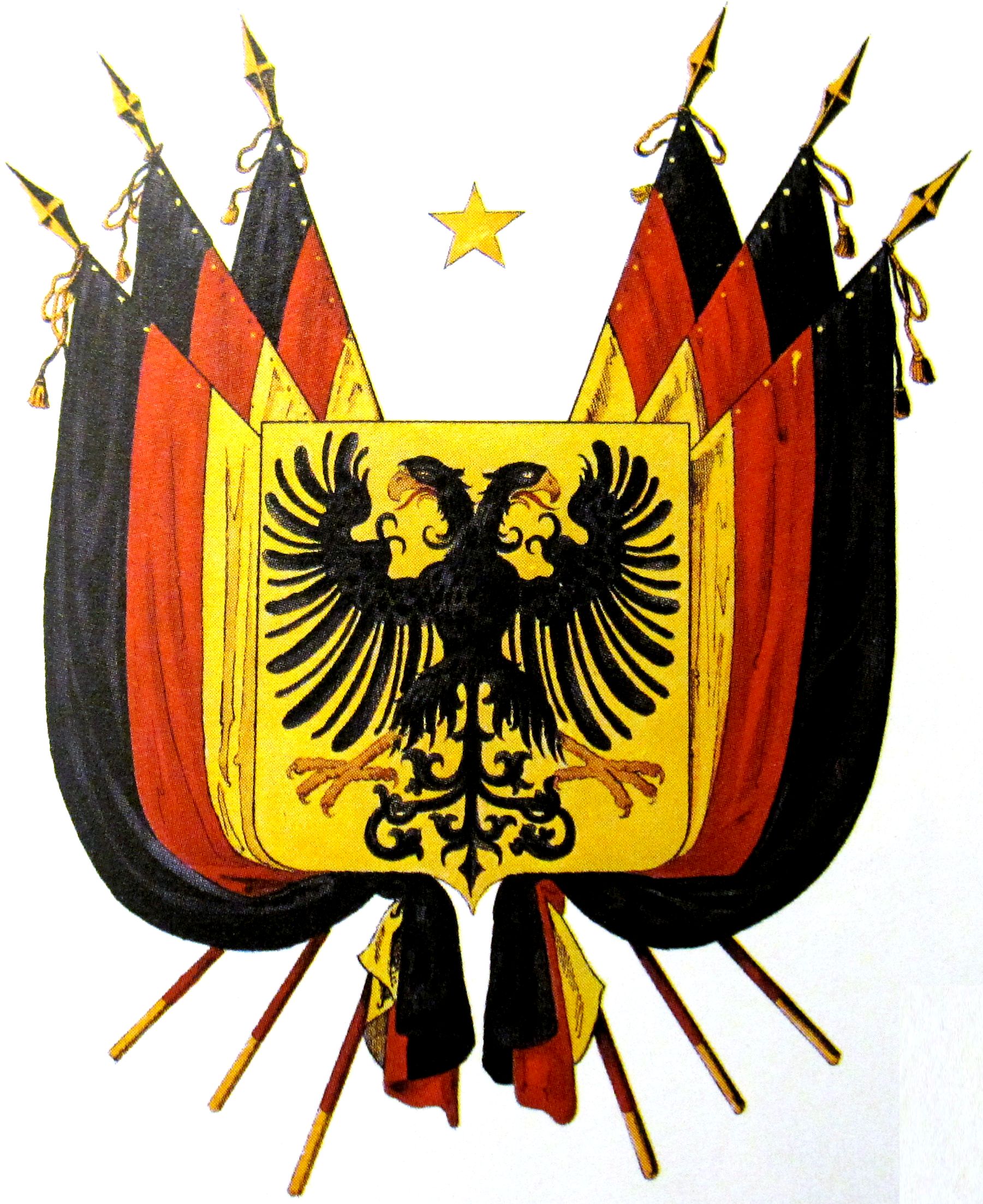 Coat of Arms of the German Confederation

The German Confederation (German: Deutscher Bund) was a loose association of 39 German states in Central Europe, created by the Congress of Vienna in 1815 to coordinate the economies of separate German-speaking countries and to replace the former Holy Roman Empire of the German Nation.[1] 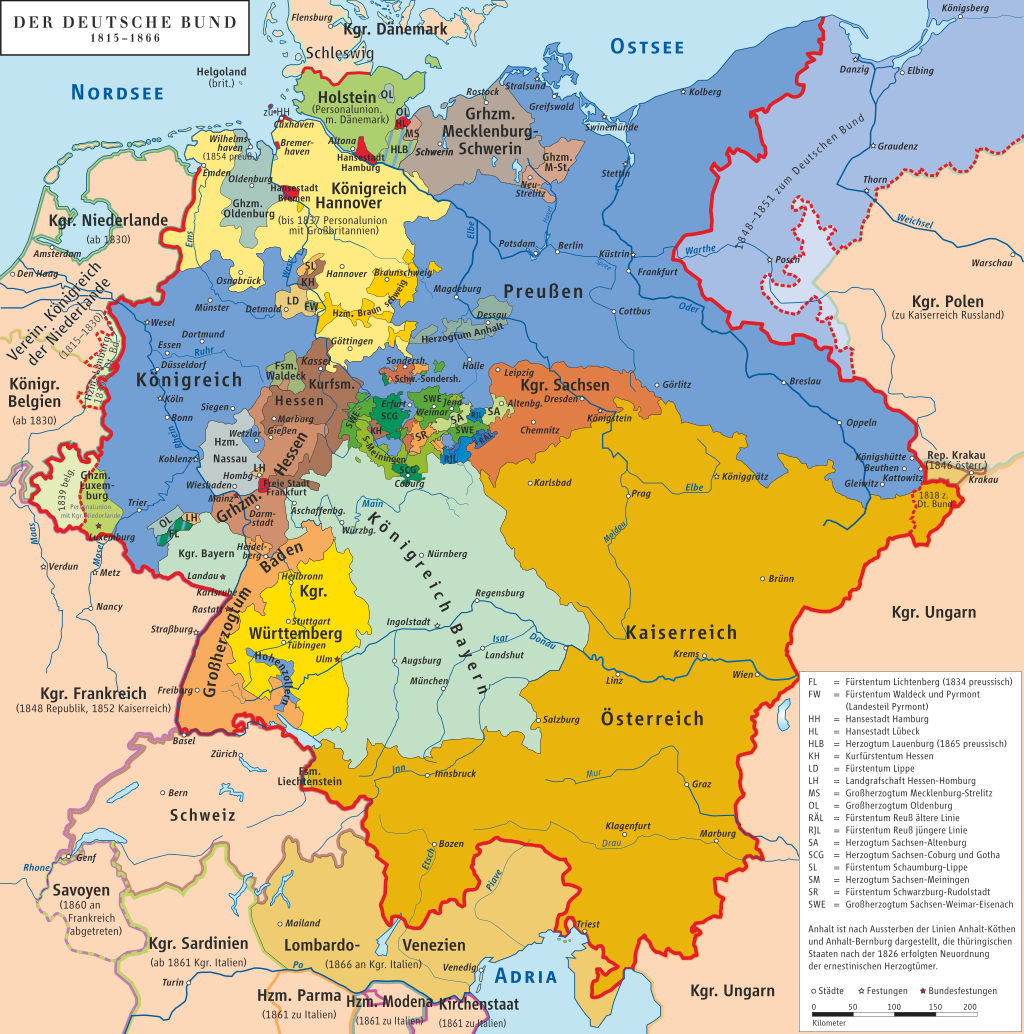 The Palais Thurn und Taxis in Frankfurt am Main was the place, where the Federal Convention (Bundesversammlung or Bundestag) took place. The Bundespalais had smaller rooms for the committees and larger rooms for the inner council (Enger Rat), also a ceremonial hall for the Fürstentag, the convention for all German rulers. 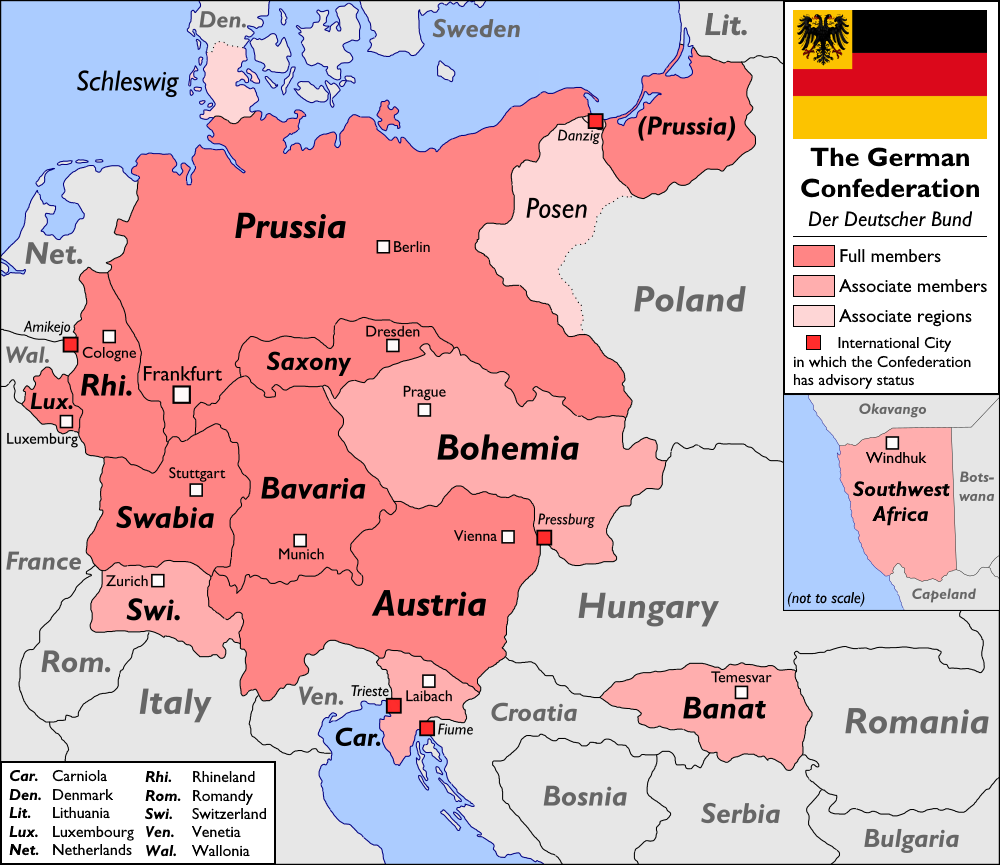 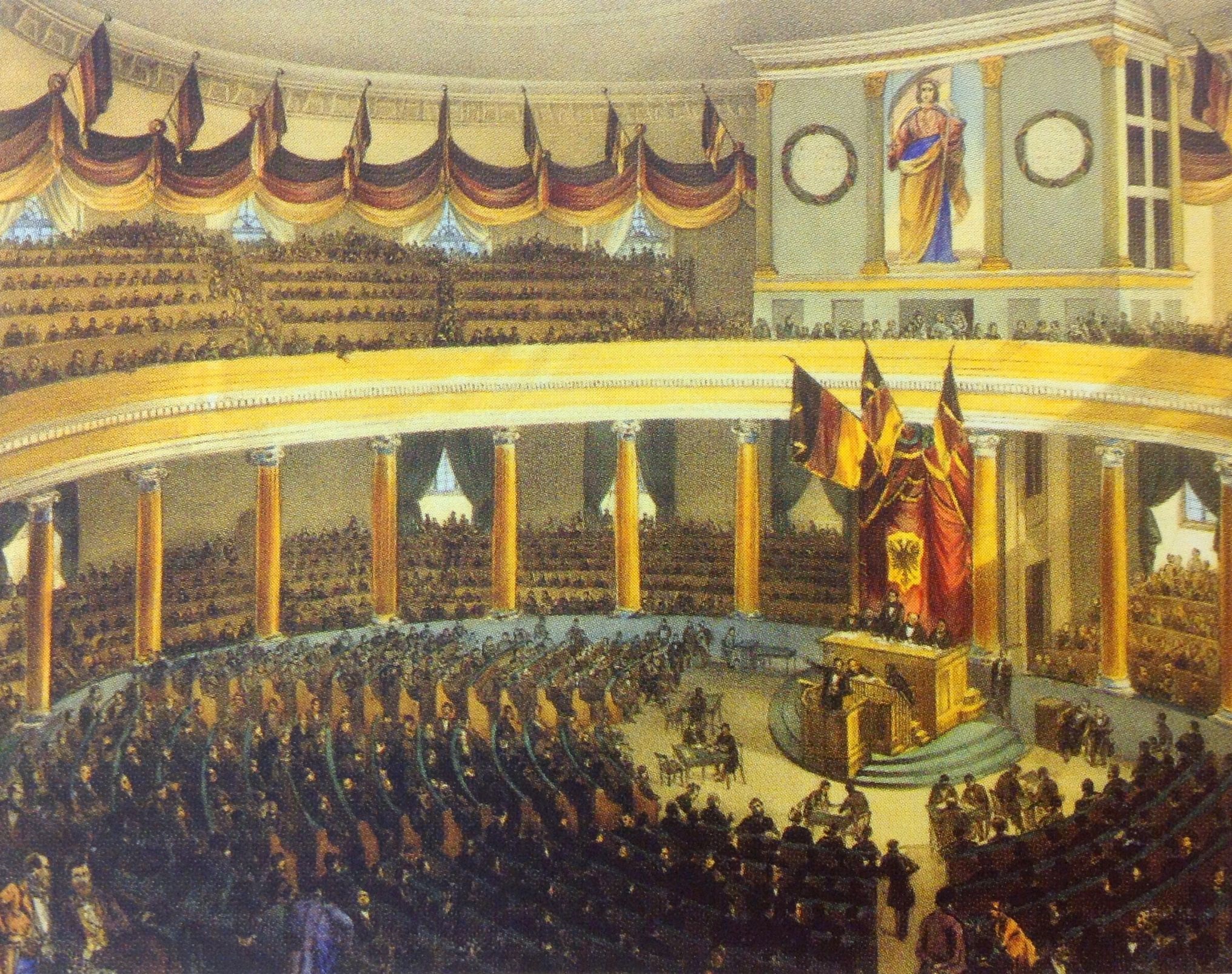 The confederatin acted as a buffer between the powerful states of Austria and Prussia. Great Britain approved of it because London felt that there was need for a stable, peaceful power in central Europe that could discourage aggressive moves by France or Russia. According to Lee, most historians have judged the Confederation to be weak and ineffective, as well as an obstacle to German nationalist aspirations. It collapsed due to the rivalry between Prussia and Austria, known as German dualism, warfare, the 1848 revolution, and the inability of the multiple members to compromise.[2] It was dissolved with Prussian victory in the Austro-Prussian War in 1866 and the establishment of the North German Confederation.

Through two centuries of revolutions, wars both external and internal, and other upheavals that caused its membership to fluctuate severely through the years, the German Confederation has survived into the modern day evolving from its origins as a semi-feudal successor to the Holy Roman Empire into a modern political and economic union of German-speaking states headquartered in Frankfurt. Its seven full members share a number of political and cultural institutions and are joined together in a currency and customs union, while its five associate members (Bohemia, Carniola, and Banat with large German minorities, the former Prussian colony of Southwest Africa, distant but with a German majority, and reluctant-to-join Switzerland) are members of the Zollverein customs union without sharing the Bundsthaler currency. Some Confederal institutions also apply in the associate regions of Posen, formerly part of Prussia and now part of Poland, and Schleswig, part of Denmark, both of which have significant German populations. The Confederation also serves as an advisory power in the International Cities of Danzig (together with Prussia individually and Poland), Pressburg (together with Bohemia and Austria individually and Hungary), Trieste and Fiume (together with Carniola and Austria individually, Venice, Italy, and Croatia), and the International Zone of Amikejo (together with Rhineland individually, the Netherlands, Wallonia, and the Universal Esperanto Association). Despite occasional disagreements between its members, and accusations that it is just a mechanism for Prussia to dominate the rest, the German Confederation is largely considered a success and has inspired attempts to emulate it in other regions of Europe.[3]

The German Federal Army (Deutsches Bundesheer) was founded to collectively defend the German Confederation from external enemies, primarily France. It consisted of troops from all 41 federal states. Each state was required to have 1 % of thier overall population armed and ready to march when called upon. Some of the smaller German states provided only c. 500 men.

An Army Corps consisted of "at least two Divisions" (§ 24 of the military regulations). The 8th Corps consisted of the soldiers of the southwest (mainly from the strong Württemberg Army), the 9th Corps of those from Central Germany and the 10th (X.) of those from Northern Germany. The new German Navy was put together mainly from ships of the Austrain Navy. The strength of this mobilized German Army was projected to total 301,637 men in 1820, 303,484 men in 1835 and 391,634 men in 1860. A third was to be cavalry, for every 1,000 men there should be two pieces of artillery.