From Metapedia
(Redirected from German Reich)
Jump to: navigation, search

Germany in ordinary speech usually refers to the Federal Republic of Germany which is a country created after World War II and united in 1990 with the German Democratic Republic.

In another sense Germany is the fatherland or the nation state of the German nation (with nation here meaning ethnic/racial group, see the Nationalism article). In this sense Germany includes the Federal Republic of Germany, the Republic of Austria and other territories where Germans live. Exactly what territories are included may be controversial issues. Also controversially, this may include territories where Germans lived until relatively recently when they were expelled at the end of WWII, such as territories in what is now Poland and the Czech Republic. Pan-Germanism is an ideology/movement seeking to unify these territories.

Germany in this sense traces its origin to the early Germanic tribes east of the Rhine in the area known as Germania. They successfully resisted conquest by the Roman empire. Most well known is the victory in AD 9 by Hermann over three Roman legions. Tacitus in around 98 AD wrote the book Germania on the German tribes. Some of the tribes later migrated into and conquered large parts of Western Europe.

Eventually the Holy Roman Empire (from 1512 the "Holy Roman Empire of the German Nation") appeared, also known as the First Reich. Its borders varied greatly over time and it gradually fragmented into numerous de facto independent principalities. Austria-Hungary and Prussia eventually became the major powers. The Holy Roman Empire formally ceased to exist in 1806. 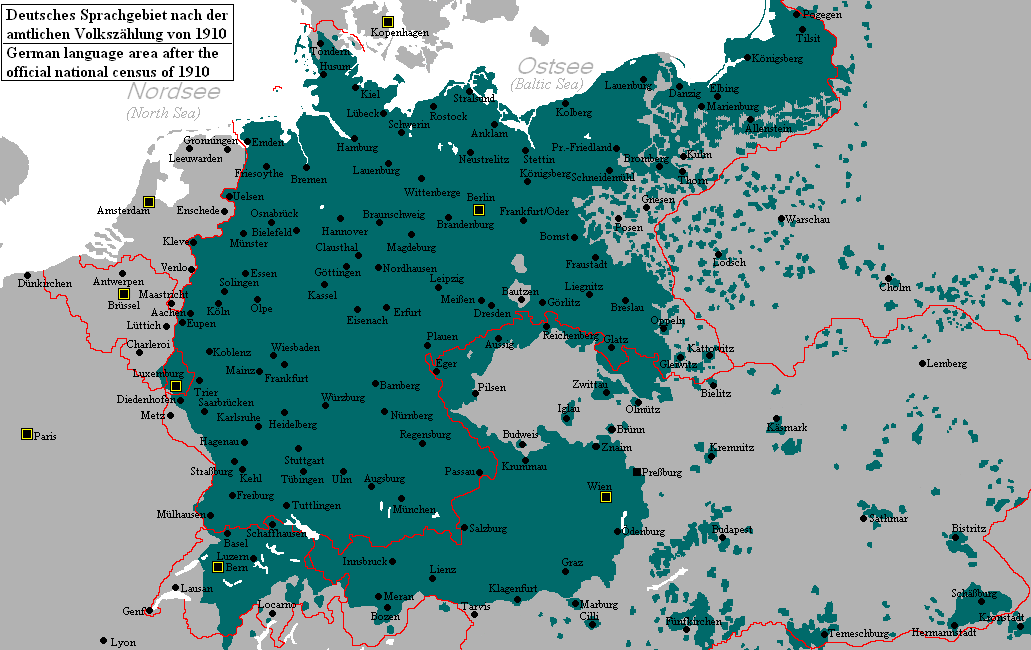 Germany as defined by the German language area after the official national census of 1910.

In 1871 northern Germany was unified under the direction of the Prussian Chancellor Otto von Bismarck as the German Empire, also known as the Second Reich, with the Prussian King as Emperor. Austria-Hungary, having a large German population in some areas, and several other German speaking areas which had previously been part of the Holy Roman Empire were not part of the German Empire.

At the end of the First World War, the German Revolution of 1918–19 resulted in the Weimar Republic. It was forced to sign the harsh Treaty of Versailles. Austria-Hungary was divided into parts which included the Republic of Austria.

During and after the war the German people became the victim of mass killings with disputed number of victims. See Claimed mass killings of Germans by the WWII Allies. Brutal ethnic cleansings expelled Germans from many areas. Some parts were partitioned into Allied and Soviet Union controlled sectors which developed into the Federal Republic of Germany and the German Democratic Republic. West Berlin was an Allied enclave in the Eastern partition. These parts were unified on October 3, 1990. Austria was also partitioned but unified in 1955.

Strictly speaking, the Federal Republic of Germany does not have a constitution but is built on a so-called Basic Law (Grundgesetz). German courts have treated the Basic Law as a constitution even though it contains no declaration of constitutional status. The Basic Law declares that it shall lose its on validity as soon as the German people ratify a constitution. Although the vast majority of Germans today believe that their country is sovereign, Germany’s exact legal status is ambiguous.

The translation of the German term "Reich" into the English language can be interchangeable, meaning either Empire, or State.

The term empire sometimes has connotations such as a multi-ethnic state created by military conquest and the presence of an Emperor, such as in the Holy Roman Empire. The First Reich is usually attributed to the Holy Roman Empire (800–1806), whilst the "Second Reich" refers to the 1871-1918 German Empire.

The official German name of the plutocratic-liberal democratic Weimar Republic was the Deutsches Reich ("German Reich"). In this context it clearly refers to the State and not an empire.

The name "Deutsches Reich" was also used by National Socialist Germany between 1933-1943. During the 1943-1945 period it was changed to "Großdeutsches Reich" (Greater German Reich). The term "Third Reich" was not an official name, and is usually used by those critical of the government of that period.

After 1945 when the communist German Democratic Republic (DDR) was established, they continued using DR (Deutsches Reich) in many contexts, notably the railways (Deutsches Reichsbahn).