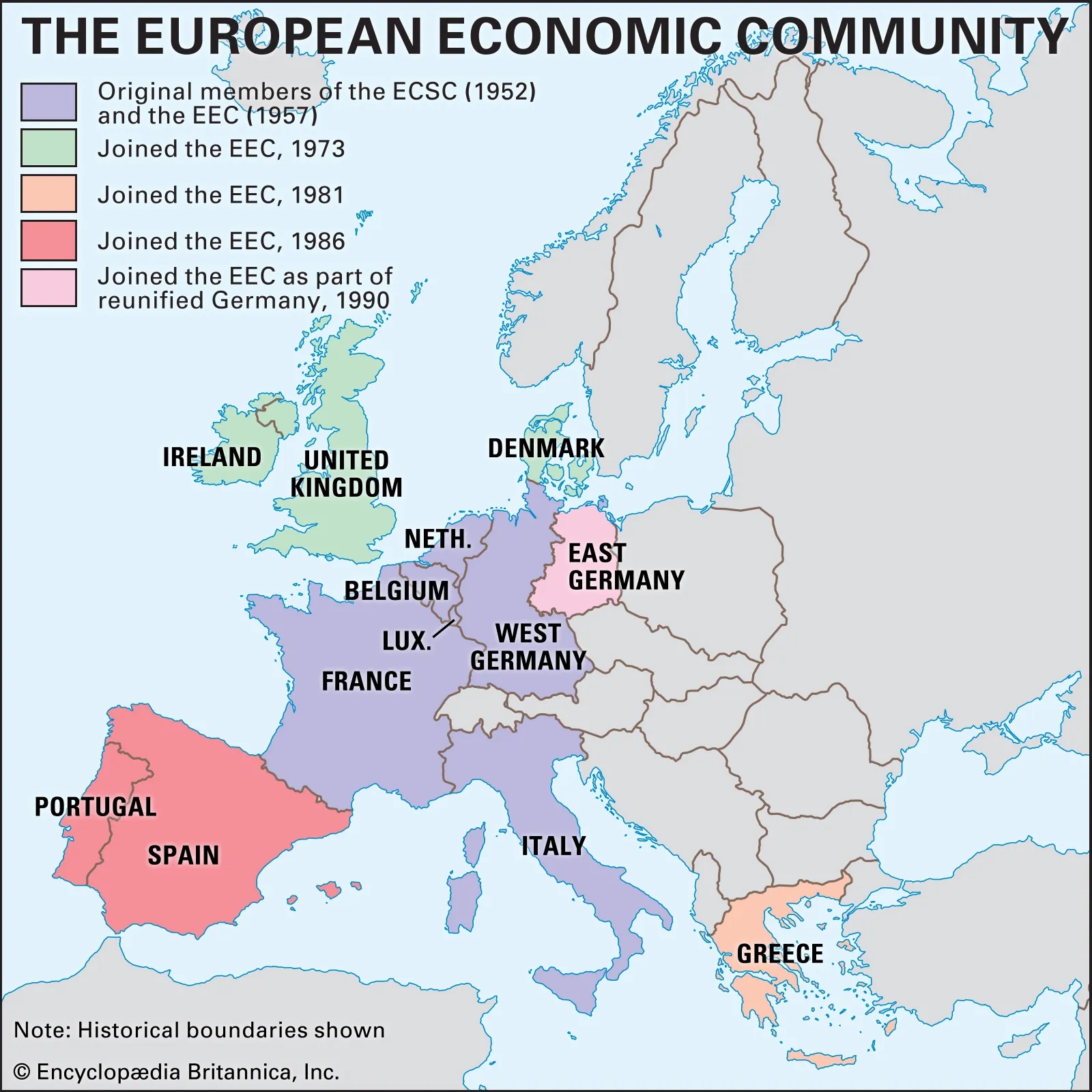 In 1951 the Treaty of Paris was signed, creating the European Coal and Steel Community (ECSC). This was an international community based on supranationalism and international law, designed to help the economy of Europe and prevent future war by integrating its members together.

In the aim of creating a federal Europe two further communities were proposed. A European Defence Community (EDC) and a European Political Community (EPC). While the treaty for the latter was being drawn up by the Common Assembly, the ECSC parliamentary chamber, the EDC was rejected by the French Parliament. President Jean Monnet, a leading figure behind the communities, resigned from the High Authority in protest and began work on alternative communities, based on economic integration rather than political integration[1]. After the Messina Conference in 1955, Paul Henri Spaak was given the task to prepare a report on the idea of a customs union. The so-called Spaak Report[2] of the Spaak Committee formed the cornerstone of the intergovernmental negotiations at Val Duchesse castle in 1956. Together with the Ohlin Report the Spaak Report would provide the basis for the Treaty of Rome.

In 1956, Paul Henri Spaak lead the Intergovernmental Conference on the Common Market and Euratom at the Val Duchesse castle, which prepared for the Treaty of Rome in 1957. The conference led to the signature, on March 25, 1957, of the Treaty of Rome establishing a European Economic Community.

The resulting communities were the European Economic Community (EEC) and the European Atomic Energy Community (EAEC or Euratom). These were markedly less supranational than the previous communities, due to protests from some countries that their sovereignty was being infringed (however there would still be concerns with the behaviour of the Hallstein Commission). The first formal meeting of the Hallstein Commission, was held on 16 January 1958 at the Castle of the Valley of the Duchess. The EEC (direct ancestor of the modern Community) was to create a customs union while Euratom would promote co-operation in the atomic energy sphere. The EEC rapidly became the most important of these and expanded its activities. One of the first important accomplishments of the EEC was the establishment (1962) of common price levels for agricultural products. In 1968, internal tariffs (tariffs on trade between member nations) were removed on certain products.

In 1967 the Merger Treaty was signed, which combined the institutions of the ECSC and Euratom into that of the EEC, they already shared a Parliamentary Assembly and Courts. Collectively they were known as the European Communities. The Communities still had independent personalities although were increasingly integrated.

Future treaties granted the community new powers beyond simple economic matters which had achieved a high level of integration. As it got closer to the goal of political integration and a peaceful and united Europe, what Mikhail Gorbachev described as a Common European Home.

Maastricht Treaty, which entered into force in 1993, established the three pillars of the European Union. While this expanded co-operation between members into foreign policy and Justice and Home Affairs, the institutions of the EEC, now just known as the European Community (EC) due to its expanded role, had little power over these areas which operated on a more intergovernmental basis. For example, while voting within the EC is conducted by Qualified Majority Voting (QMV), in the other pillars individual members could often veto proposals.

With subsequent treaties some powers were transferred from Home Affairs to the Community, and the role of Community institutions have increase, such as granting more oversight powers to the Parliament.

The ECSC element of the Community ceased to exist when its treaty expired, having a 50 year limit, in 2002. It was seen as redundant so no effort was made to replace it, all its assets and activities were handed over to the core of the EC. In 2006 the first new community was created, the European Energy Community. Although this is not strictly comparable to the original Communities as the Energy Community does not set up institutions but rather is an agreement for neighbouring states to adopt EU standards and open up each others markets. It also does not form part of the EU, rather the EU is a member of it.