Sudetenland (Czech and Slovak: Sudety), is the German name used primarily between the two world wars to describe what became the western regions of the new artificial state of Czecho-Slovakia. The Sudetenland had been inhabited mostly by ethnic Germans for up to 800 years, particularly in the borderlands of Bohemia, Moravia, and those parts of Silesia associated with Bohemia.

The name is derived from the Sudeten mountains, though the Sudetenland extended beyond these mountains which run along the border to Silesia and contemporary Poland. The German inhabitants were called Sudeten Germans (German: Sudetendeutsche, Czech: Sudetští Němci). The German minority in Slovakia, the Carpathian Germans, are not included in this ethnic category.

The areas later known as Sudetenland never formed a single historical region, which makes it difficult to distinguish the history of the Sudetenland apart from that of Bohemia, until the advent of nationalism in the 19th century.

After the extinction of the Přemyslid dynasty, the kingdom of Bohemia was ruled by the House of Luxembourg and the Habsburgs. From the second half of the 13th century onwards the Sudetenland was already settled by ethnic Germans, who were invited by the Bohemian kings – especially by Ottokar II and Wenceslaus II. The border itself was agreed by the signing of the Peace of Eger in 1459.

From 1620 (the Bohemian rebellion) onwards the Habsburgs gradually integrated the Kingdom of Bohemia into their monarchy, and it remained a part of that realm until its dismemberment after World War I. Conflicts between Czech and German nationalists emerged in the 19th century, for instance in the Revolutions of 1848: while the German-speaking population wanted to participate in the building of a German nation state, the minority Czech-speaking population insisted on keeping Bohemia out of such plans.

Emergence of the term

In the wake of this growing nationalism, the name "Sudetendeutsche" (Sudeten Germans) emerged by the early 20th century. It originally constituted part of a larger classification of three groupings of Germans within the Austro-Hungarian Empire, which also included "Alpendeutsche" (Alpine Germans) in what later became the Republic of Austria, and "Balkandeutsche" (Balkan Germans) in Hungary and the regions east of it. Of these three terms, only the term "Sudetendeutsche" survived, because of the ethnic and cultural conflicts within Bohemia.

Changes after World War I

Following The Great War, the plutocratic Western Allies dismembered Austria-Hungary mainly using the arguments of Woodrow Wilson for "self-determination" of its constituent peoples. The German deputies of Bohemia, Moravia, and Silesia in the Imperial Parliament (Reichsrat) referred to the Fourteen Points of U.S. President Wilson and attempted to negotiate the union of the German-speaking territories with the new Republic of German Austria, which itself aimed at joining Weimar Germany.

However, Sudetenland was incorporated into a newly created artifical state of Czecho-Slovakia, a ridiculous multi-ethnic state of several nations: Czechs (43%), Germans, Slovaks, Hungarians, Ruthenians, and others. On 20 September 1918, the Prague Government asked the United States's consent for the annexation of the Sudetenland. President Woodrow Wilson sent ambassador Archibald Coolidge into the newly created state Czechoslovakia. After Coolidge became witness of Czech police brutality against peaceful Sudetengerman demonstrators (54 killed, among them women and children [1]), Coolidge suggested the possibility of ceding certain German-speaking parts of Bohemia to Germany (Cheb) and Austria (South Moravia and South Bohemia). He also insisted that the German inhabited regions of West and North Bohemia remain within Czechoslovakia. However, the American delegation at the Paris talks, with Allen Dulles as the American's chief diplomat who emphasized preserving the "unity" of the so-called Czech lands, decided not to follow Coolidge's proposal.[2] Late in October 1918, an independent Czechoslovak state, consisting of the lands of the Bohemian kingdom and areas belonging to the Kingdom of Hungary, had been illegally proclaimed. It was confirmed by the 1919 Treaty of Versailles and subsequent Treaty of Trianon.

Several German minorities in Moravia, including German populations in Brno, Jihlava, and Olomouc also attempted to proclaim their union with German Austria, but failed.

The Czechs thus rejected the aspirations of the Sudeten Germans and demanded the inclusion of the Sudetenland in their new state, despite the presence of 23.4% (as of 1921) ethnic Germans, on the grounds they had always been part of Bohemia and Moravia. The Treaty of Saint-Germain in 1919 affirmed the inclusion of the German-speaking territories within the new state of Czechoslovakia.

However, over the next two decades, some Germans in the Sudetenland continued to strive for a separation of the German inhabited regions from Czechoslovakia.

The controversies between the Czechs and this huge German minority (which constituted a majority in the Sudetenland areas) began in earnest with the loss of Austrian sovereignty when the German population found themselves in a new state, about which, despite their huge numbers, they were not consulted upon. Their general oppression by the Czechs throughout the 1920s intensified in the 1930s.

During the Great Depression the mostly mountainous regions populated by the German minority, together with other peripheral regions of Czechoslovakia, were hurt by the economic depression more than the interior of the country. Unlike the less developed regions (Ruthenia, Moravian Wallachia), the Sudetenland had a high concentration of vulnerable export-dependent industries (such as glass works, textile industries, paper-making and toy-making industries). 60 per cent of the costume jewellery and glass-making industry were located in the Sudetenland, and 69 per cent of the employees in this sector were Germans, and 95 per cent of the jewellery and 78 per cent of glassware was produced for export. The glass-making sector was affected by decreased spending power and also by protective import measures in other countries and many German workers lost their livelihoods.[4]

The high unemployment made people more disillusioned and open to populist and extremist movements (Communism, Fascism and German irredentism). In these years, the parties of German nationalists and later the Sudeten German National Socialist Party (SdP) with its radical demands gained immense popularity among Germans in Czechoslovakia.

Herr Henlein's party, immediately after the Anschluss of Austria into the Third Reich in March 1938, approached Hitler for support and the latter now made himself the advocate of ethnic Germans living in Czechoslovakia, triggering the "Sudeten Crisis".

In August, UK Prime Minister, Neville Chamberlain, sent Lord Runciman to Czechoslovakia in order to see if he could obtain a settlement between the Czechoslovak government and the Germans in the Sudetenland. Lord Runciman's first day included meetings with President Eduard Benes and Milan Hodza as well as directly meeting the Sudeten Germans from Henlein's SdP. On the next day he met with Dr and Mme Benes and later met non-National Socialist Germans in his hotel [2]

A full account of his report - including summaries of the conclusions of his meetings with the various parties - which he made in person to the Cabinet on his return to Britain is found in the Document CC 39(38)[6]. Lord Runciman[7] expresses sadness that he could not bring about agreement with the various parties, but he agreed with Lord Halifax that the time gained was important. He reports on the situation of the Sudeten Germans, and he gave details of four plans which had been proposed to deal with the crisis, each of which had points which, he reported, made it unacceptable to the other parties to the negotiations. The four were: Transfer of the Sudetenland to the Reich; hold a plebiscite on the transfer of the Sudetenland to the Reich, organize a Four Power Conference on the matter, create a federal Czechoslovakia. At the meeting, he said that he was very reluctant to offer his own solution; he had not seen this as his task. The most that he said was that the great centres of opposition were in Eger and Asch, in the north-western corner of Bohemia, which contained about 800,000 Germans and very few others. He did say that the transfer of these areas to Germany would almost certainly be a good thing; however, he did add that the Czechoslovak army would certainly oppose this very strongly, and that Dr. Benes had said that they would fight rather than accept it.[8]

British Prime Minister Neville Chamberlain met with Adolf Hitler in Berchtesgaden on 15 September and agreed to the cession of the Sudetenland. Three days later, French Prime Minister Édouard Daladier did the same. No Czechoslovak representative was invited to these discussions.

Chamberlain met Hitler in Godesberg on September 22 to confirm the agreements. Hitler however, now demanded not only the annexation of the Sudetenland, but in addition the immediate military occupation of the territories, giving the Czechoslovakian army no time to adapt their defence measures to the new borders. To achieve a solution, Italian prime minister Benito Mussolini suggested a conference of the major powers in Munich and on September 29, Hitler, Daladier and Chamberlain met and agreed to Mussolini's proposal (actually prepared by Hermann Göring) and signed the Munich Agreement accepting the immediate occupation of the Sudetenland. The Czechoslovak government, though not party to the talks, promised to abide by the agreement on September 30.

The Sudetenland was transferred to German sovereignty between October 1 and October 10, 1938. The Czech part of Czechoslovakia was subsequently invaded by Germany, in March 1939, with a portion being annexed and the remainder turned into the Protectorate of Bohemia and Moravia. Slovakia declared its independence from Czecho-Slovakia, becoming the Slovak Republic, a satellite state and ally of National Socialist Germany.

The Sudetenland was initially put under military administration, with General Wilhelm Keitel as Military governor. On 21 October 1938, the annexed territories were divided, with the southern parts being incorporated into the neighbouring Reichsgaue Oberdonau and Niederdonau.

The northern and western parts were reorganized as the Reichsgau Sudetenland, with the city of Reichenberg established as its capital. Konrad Henlein (now openly a NSDAP member) administered the district first as Reichskommissar (until 1 May 1939) and then as Reichsstatthalter (1 May 1939–4 May 1945). Sudetenland consisted of three political districts: Eger (with Karlsbad as capital), Aussig (Aussig) and Troppau (Troppau).

On 4 December 1938 there were elections in Reichsgau Sudetenland, in which 97.32% of the adult population voted for NSDAP. About a half million Sudeten Germans joined the NSDAP which was 17.34% of the German population in Sudetenland (the average NSDAP participation in NS Germany was 7.85%). This means the Sudetenland was the most "pro-National Socialist" region in the Third Reich.[9] Because of their knowledge of the Czech language, many Sudeten Germans were employed in the administration of the Protectorate of Bohemia and Moravia as well as in National Socialist organizations. The most notable was Karl Hermann Frank: the SS and Police-General and Secretary of State in the Protectorate. 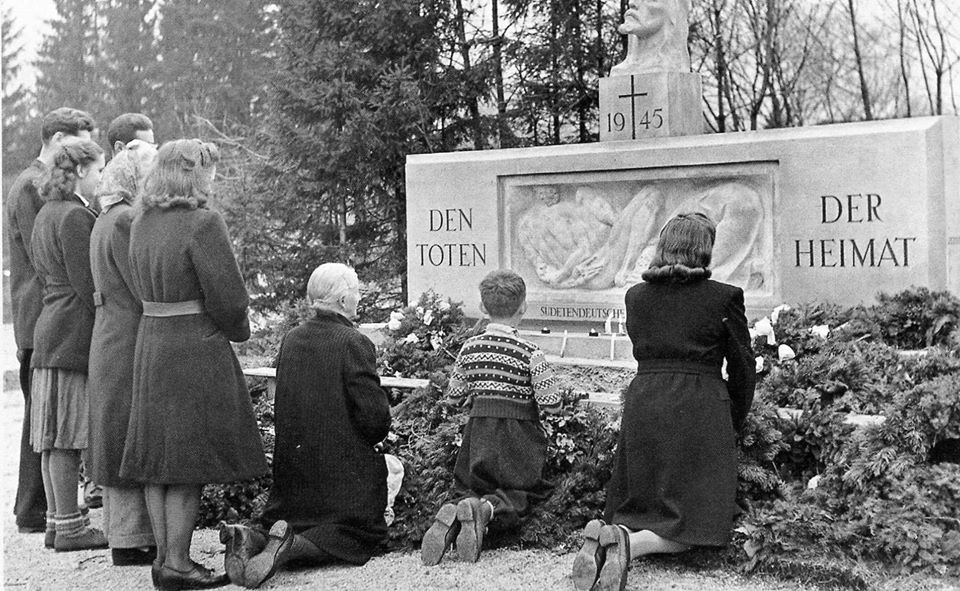 Memorial in Germany to the murdered German population of the Sudetenland.

Following the end of World War II, the Soviet Union announced that most of the German populations in Eastern Europe had "fled" and that those who had not would be expelled. This was announced to the Western Plutocratic Allies at the Potsdam Conference in 1945 who merely acquiesced. Czech communists and fanatical nationalists now proceeded to expel and murder as many Germans, immaterial of age as they could find.[10][11][12][13] The number of expelled Germans in the early phase alone (spring-summer 1945) is estimated to be around 500,000 people. It has been said that some 244,000 Germans, who had to prove that they were never Nazi sympathisers, were allowed to remain in Czechoslovakia, but there remains some doubt about these claims. German refugees from Czechoslovakia are represented by the Sudetendeutsche Landsmannschaft.

As the German population was expelled, the former Sudetenland was resettled, mostly by Czech settlers, similar to the theft of private property and resettlement by Poland in the stolen German provinces (East Prussia, Pomerania). Some areas remained depopulated for several strategic reasons (extensive mining, military interests etc.) or simply because there were insufficient Czechs who wished to move there. For a while there remained areas with noticeable German minorities only in the westernmost borderland around Cheb; in the Egerland German minority organizations continue to exist. These, however, were soon cleaned out.

In the 2001 census, approximately 40,000 people in all of the Czech Republic claimed German ethnicity. However it seems probable that many of these had come to the Czech Republic after the demise of Communism and the Eastern Bloc.