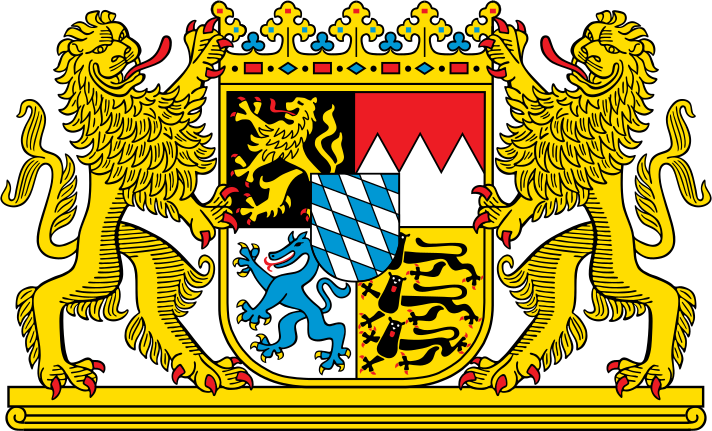 Coat of arms of Bavaria since 1949

The geographic region and Free State of Bavaria (German: Freistaat Bayern), with an area of 70,553 km² (27,241 square miles) and almost 13.154.738 million inhabitants (as of June 2021), forms the southernmost and geographically largest state of the Federal Republic of Germany. Its capital is Munich. 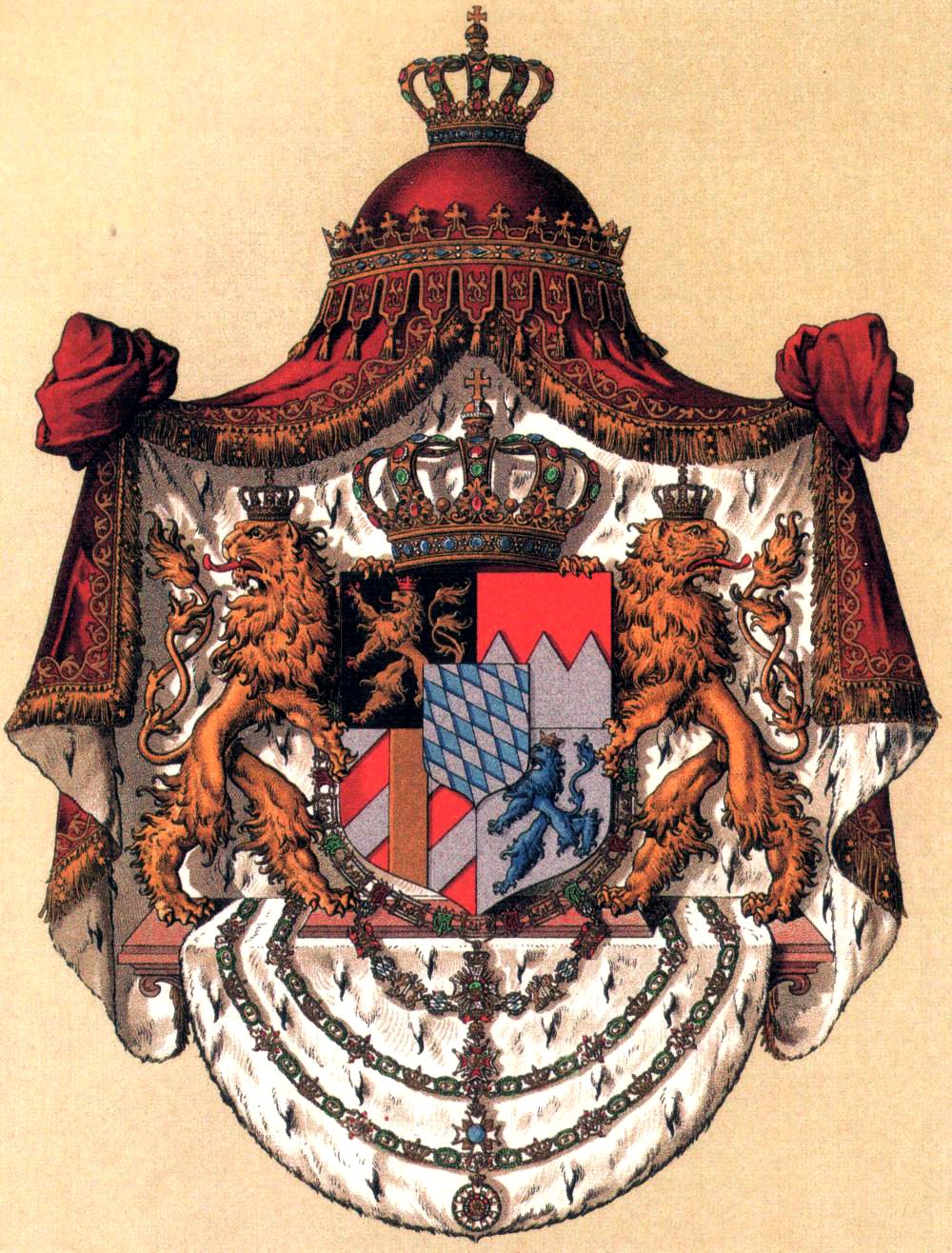 Coat of arms of the Kingdom of Bavaria 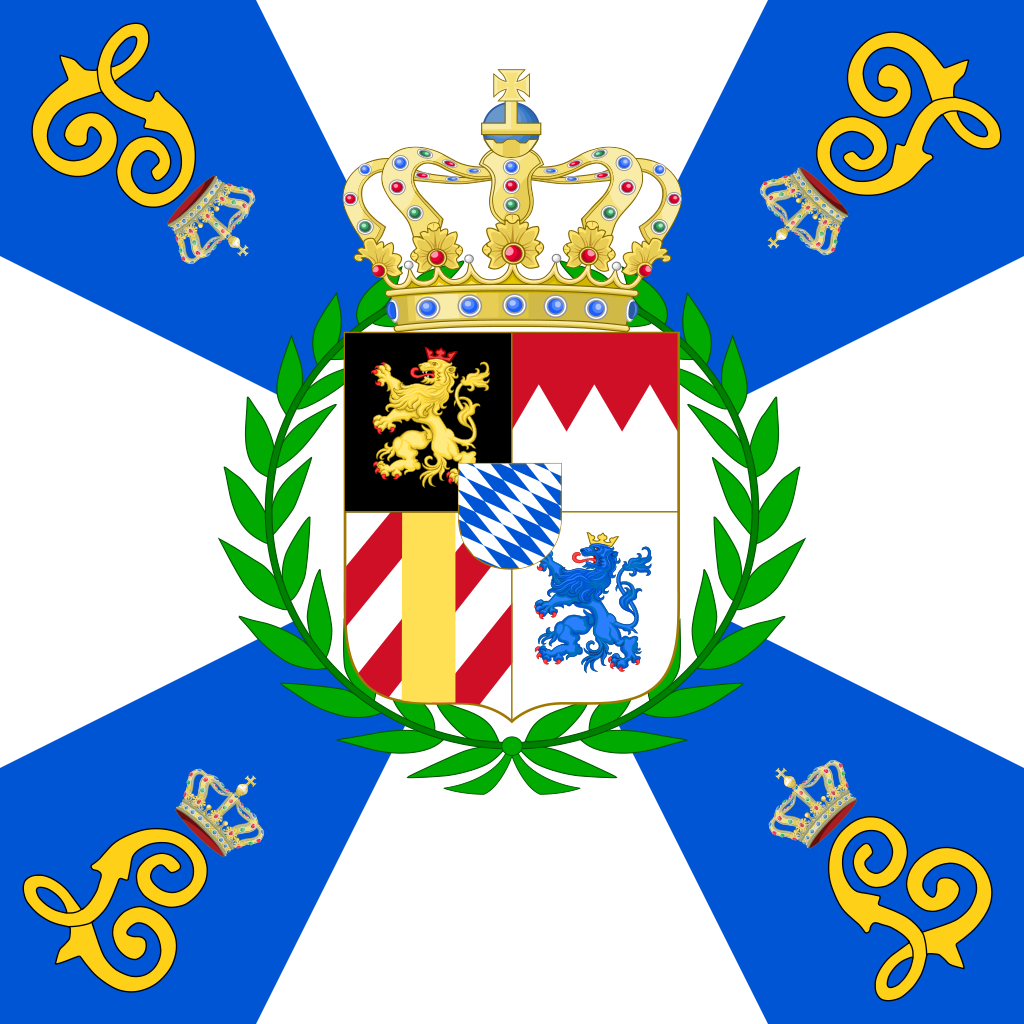 The Bavarians, a Germanic tribe, emerged in a region north of the Alps, originally inhabited by the Celts, which had been part of the Roman provinces of Rhaetia and Noricum. During the 5th century, the Romans in Noricum and Raetia, south of the Danube, came under increasing pressure from people north of the Danube. This area had become inhabited by Suebian groups from further north and was considered by Romans to be part of Germania. The Bavarians spoke Old High German but, unlike other Germanic groups, did not migrate from elsewhere. Rather, they seem to have coalesced out of other groups left behind by Roman withdrawal late in the 5th century AD. These peoples may have included Marcomanni, Thuringians, Goths, Rugians, Heruli, and some remaining Romans. The name "Bavarian" ("Baiuvari") means "Men of Baia" which may indicate Bohemia, the homeland of the Marcomanni. They first appear in written sources circa 520. Saint Boniface completed the people's conversion to Christianity in the early 8th century. Bavaria was, for the most part, unaffected by the Protestant Reformation, and even today, most of it is strongly Roman Catholic.

From about 550 to 788, the house of Agilolfing ruled the Duchy of Bavaria, ending with Tassilo III who was deposed by Charlemagne.

Three early dukes are named in Frankish sources: Garibald I may have been appointed to the office by the Merovingian kings and married the Lombard princess Walderada when the church forbade her to King Chlothar I in 555. Their daughter, Theodelinde, became Queen of the Lombards in northern Italy and Garibald was forced to flee to her when he fell out with his Frankish overlords. Garibald's successor, Tassilo I, tried unsuccessfully to hold the eastern frontier against the expansion of Slavs and Avars around 600. Tassilo's son Garibald II seems to have achieved a balance of power between 610 and 616.

After Garibald II little is known of the Bavarians until Duke Theodo I, whose reign may have begun as early as 680. From 696 onwards he invited churchmen from the west to organize churches and strengthen Christianity in his duchy (it is unclear what Bavarian religious life consisted of before this time). His son, Theudebert, led a decisive Bavarian campaign to intervene in a succession dispute in the Lombard Kingdom in 714, and married his sister Guntrud to the Lombard King Liutprand. At Theodo's death the duchy was divided among his sons, but reunited under his grandson Hucbert.

At Hucbert's death (735) the duchy passed to a distant relative named Odilo, from neighboring Alemannia (modern Southwest Germany and northern Switzerland). Odilo issued a law code for Bavaria, completed the process of church organization in partnership with St. Boniface (739), and tried to intervene in Frankish succession disputes by fighting for the claims of the Carolingian Grifo. He was defeated near Augsburg in 743 but continued to rule until his death in 748.

Tassilo III (b. 741 - d. after 794) succeeded his father at the age of eight after an unsuccessful attempt by Grifo to rule Bavaria. He initially ruled under Frankish oversight but began to function independently from 763 onwards. He was particularly noted for founding new monasteries and for expanding eastwards, fighting Slavs in the eastern Alps and along the Danube and colonizing these lands. After 781, however, his cousin Charlemagne began to pressure Tassilo to submit and finally deposed him in 788. The deposition was not entirely legitimate; Dissenters attempted a coup against Charlemagne at Tassilo's old capital of Regensburg in 792, led by his own son Pippin the Hunchback, and the king had to drag Tassilo out of imprisonment to formally renounce his rights and titles at the Assembly of Frankfurt in 794. This is the last appearance of Tassilo in the sources and he probably died a monk. As all of his family were also forced into monasteries, this was the end of the Agilolfing dynasty.

For the next 400 years numerous families held the duchy, rarely for more than three generations. With the revolt of duke Henry the Quarrelsome in 976, Bavaria lost large territories in the south and south east. The last, and one of the most important, of these dukes was Henry the Lion of the house of Welf, founder of Munich. When Henry the Lion was deposed as duke of Saxony and Bavaria by his cousin, Frederick I, Holy Roman Emperor, in 1180, Bavaria was awarded as fief to the Wittelsbach family, which ruled from 1180 to 1918. Also the Electoral Palatinate was acquired by the Wittelsbach in 1214.

The first of several divisions of the duchy of Bavaria occurred in 1255. With the extinction of the Hohenstaufen in 1268 also Swabian territories were acquired by the Wittelsbach dukes. Emperor Louis the Bavarian acquired Brandenburg, Tyrol, Holland and Hainaut for his House but released the Upper Palatinate for the Palatinate branch of the Wittelsbach in 1329. In 1506 with the Landshut War of Succession the other parts of Bavaria were reunited and Munich became the sole capital.

In 1623 the Bavarian duke replaced his relative, the Count Palatine of the Rhine in the early days of the Thirty Years' War and acquired the powerful prince-electoral dignity in the Holy Roman Empire, determining its Emperor thence forward, as well as special legal status under the empire's laws. Also the Upper Palatinate was reunited with Bavaria. The ambitions of the Bavarian prince electors led to several wars with Austria during the early 18th century. From 1777 onwards Bavaria and the Electoral Palatinate were governed in personal union again.

When Napoleon abolished the Holy Roman Empire, Bavaria became a kingdom (Königreich Bayern) in 1806, and its area reduplicated. Tyrol and Salzburg were temporarily reunited with Bavaria but finally ceded to Austria. In return the Rhenish Palatinate and Franconia were annexed to Bavaria in 1815. Between 1799 and 1817 the leading minister count Montgelas followed a strict policy of modernisation and laid the foundations of administrative structures that survived even the monarchy and are (in their core) valid until today. In 1818 a modern constitution (by the standards of the time) was passed, that established a bicameral Parliament with a House of Lords ("Kammer der Reichsräte") and a House of Commons ("Kammer der Abgeordneten"). The constitution was valid until the collapse of the monarchy at the end of the First World War.

After the rise of Prussia to prominence Bavaria managed to preserve its independence by playing off the rivalries of Prussia and Austria within the German Confederation, but defeat in the 1866 Austro-Prussian War led to its incorporation into the German Empire in 1871. In the early 20th century Wassily Kandinsky, Paul Klee, Henrik Ibsen, and other notable artists were drawn to Bavaria, notably to the Schwabing district of Munich, later devastated by World War II.

The communist Jew, Kurt Eisner, who usurped King Ludwig III, was eliminated in 1919 leading to a violently suppressed Judeo-communist revolt. This led to a raise in patriotic awareness and action, notably the 1923 March on the Feldherrnhalle, and Munich and Nuremberg became National Socialist strongholds under the Third Reich. As a manufacturing center, Munich was heavily bombed during World War II and occupied by U.S. troops.

Since World War II, Bavaria has been rehabilitated into a prosperous industrial hub. A massive reconstruction effort restored much of Munich's historic core, and the city played host to the 1972 Summer Olympics. State minister-president Edmund Stoiber was the CDU/CSU candidate for chancellor (Bundeskanzler) in the 2002 federal election, and native son Cardinal Joseph Ratzinger was elected Pope Benedict XVI in 2005.