Nuremberg (German: Nürnberg) is an ancient city today in Bavaria, Germany, which had been a free city of the Holy Roman Empire down to 1806. It is situated on the Pegnitz river and the Rhine-Main-Danube Canal and is Franconia region's largest city. It is about 170 km north of Munich. Prior to The Great War it was the chief commercial and manufacturing town in southern Germany.[2] During the 1930s it became famous for the National Socialist Party's annual rallies, held there. It was badly damaged during the Allied terror bombings of World War II and is infamous for the neo-Soviet show trials held there by the so-called Allies following that conflict. 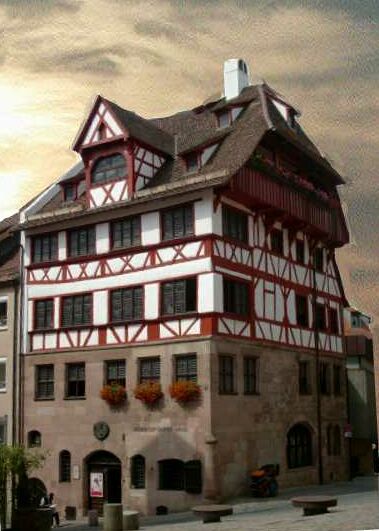 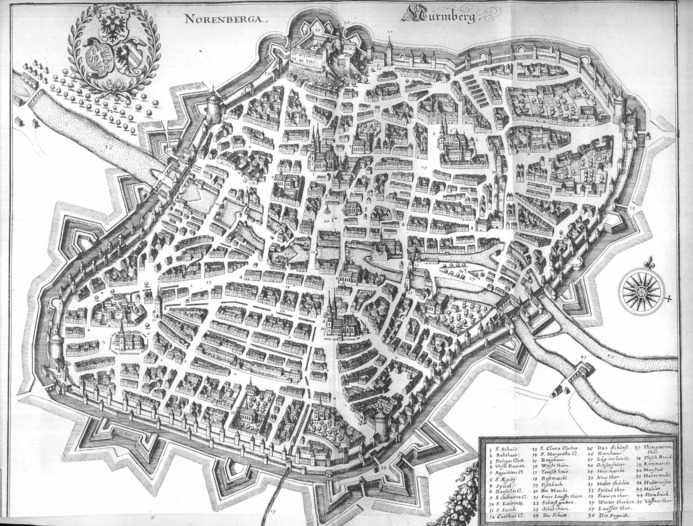 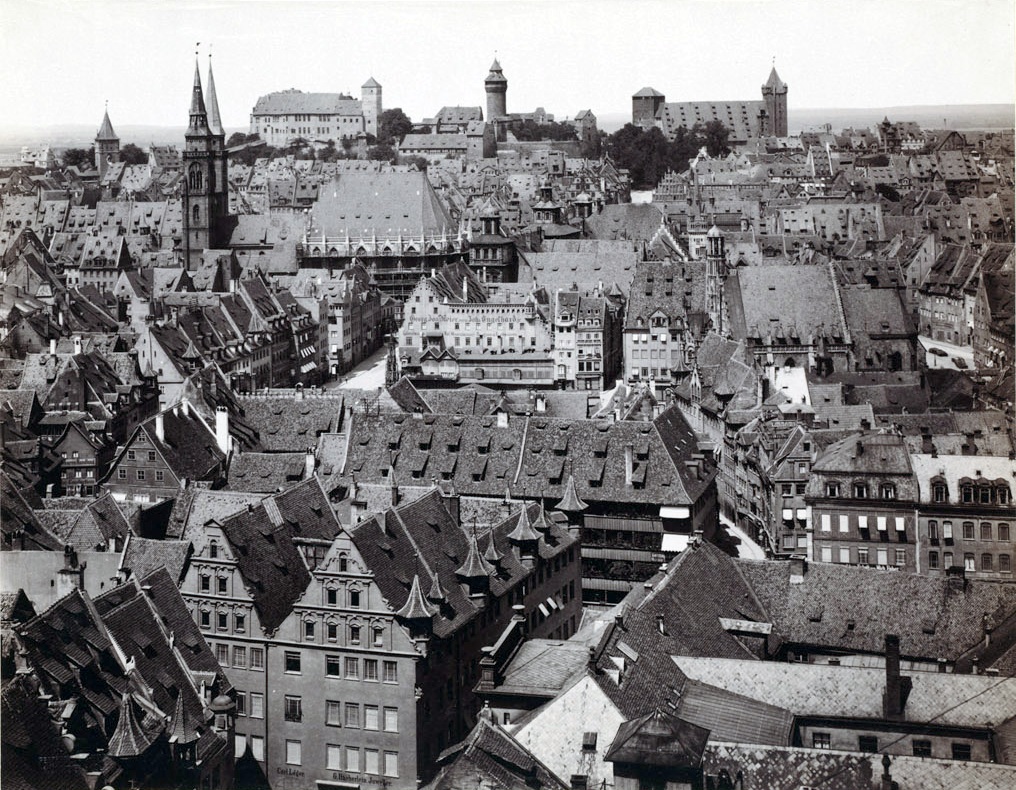 Altstadt before the allied terror bombing in WWII

The first historical mention of the castle of Nuremberg occurs in a document of 1050. In 1105 the fortress afforded protection for two months to Emperor Henry IV against his rebellious son, afterwards Henry V. It subsequently passed by inheritance to the Hohenstaufens, Frederick and Conrad, and in 1127 successfully defied the attacks of the Emperor Lothair. From that date, with the exception of a brief period under the rule of Henry 'The Proud' (1130-38), Nuremberg maintained its independence as a free city down to 1806. Conrad II and Frederick 'Barbarossa' frequently occupied the castle, and the privileges accorded to the town by these and other Emperors greatly prompted its progress, which was accelerated by its adherence to the Rhenish League. From the southern slope of the castle hill it gradually extended down to and beyond the Pegnitz river. The government was originally vested in the patrician families ('Gwschlechter'), and though expelled by the artisans in 1348, they returned in the following year and with the aid of Charles IV obtained a firmer grasp of power. That Emperor cherished a special affection for Nuremberg, and in his first Golden Bull on 1356 ordained that every Emperor should hold his first Diet there. In 1424, during the Hussite War, the Imperial Regalia were transferred by his son the Emperor Sigismund to Nuremberg, whence they were removed to Vienna in 1796.[3]

The early history of Nuremberg is closely interwoven with that of the Hohenzollern family. The office of Burgrave, originally a deputy of the Emperor, was first held by Frederick 1st (d.1218) of this family. About 1227 the Hohenzollerns divided into the Franconian and the Swabian lines, and after the 13th century the chief residence of the family was at Cadolzburg, and after 1363 at Ansbach. When Frederick VI was invested by the Emperor Sigismund with the Mark of Brandenburg in 1415, the Hohenzollerns formally ceded to the town their castle, which stood near the Imperial castle, but they endeavored to retain their other rights in Nuremberg. The bitter feuds with the Margraves of Ansbach, Albert 'Achilles' (1449) and Casimir (1502), did not prevent the continuous growth of the town, which at the beginning of the 16th century had become, like Augsburg, one of the chief depots of the trade between Germany, Venice, and the East. The discovery of the sea route to India somewhat impaired the prosperity of the town; it suffered still more severely from its feud with the Margrave Albert Alcibiades (1552-4) and during the Thirty Years War.[4] In 1632 during the Thirty Years' War, the city, occupied by the forces of Gustavus Adolphus of Sweden, was besieged by the army of Imperial general Albrecht von Wallenstein.

In 1298, the Jews of the town were accused of having desecrated the host and 698 were slain in one of the many Rintfleisch Massacres. Behind the massacre in 1298 was also the desire to combine the northern and southern parts of the city, which were divided by the Pegnitz River. Jews had been settled in that flood-prone area, but as the city leaders realized, this center of town was crucial to its future development. Hence, the Jewish population had to be removed. This area is now the place of the City Market, Frauenkirche and Rathaus (City Hall).

At the beginning of the nineteenth century Nuremberg was practically bankrupt, hastened by the feeble rule of the patricians. In 1806 with the Holy Roman Empire formally being dissolved, Nuremberg passed to Bavaria, which took over the city's debts and guaranteed their amortization. As a Bavarian city Nuremberg prospered greatly, thanks to its favourable situation on the great routes of traffic. It's population in 1871 was 83,200 but had grown to 360,000 (7800 Jews) by 1914,[5] and is today slightly more than half a million people.

The first German railway, from Nuremberg to nearby Fürth, was opened in 1835.

Because of the city's relevance to the Holy Roman Empire and its position in the center of Germany, the NSDAP chose the city to be the site of huge party rallies. The rallies were held annually from 1927 to 1938 at Nuremberg. After Hitler's rise to power in 1933, the Nuremberg rallies became huge state events.A number of sites were constructed solely for these assemblies. At the 1935 rally, Hitler ordered the Reichstag to convene at Nuremberg and to pass the Nuremberg Laws which protected Germans from Jewish infiltration into German society and revoked German citizenship for all Jews. (Although this was not a first for Germany as many of these laws were already in operation in Poland.) Today, several examples of National Socialist architecture can still be seen in the city. The city was also the home of National Socialist journalist Julius Streicher, the publisher of Der Stürmer.

During World War II, Nuremberg was the headquarters of Wehrkreis (military district) XIII, and an important site for military production, including airplanes, submarines, and tank engines. The city was severely damaged in Allied strategic bombing from 1943-1945. On January 2, 1945, the medieval city centre was systematically bombed by the Royal Air Force and the United States Air Force and about ninety percent of it was destroyed in only one hour, with 1,800 residents killed and roughly 100,000 displaced. In February 1945, additional attacks followed, again deliberately targeting purely residential districts. In total, about 6,000 Nuremberg residents are estimated to have been killed in air raids. Despite this, the city was rebuilt after the war and was to some extent, restored to its pre-war appearance including the reconstruction of some of its medieval buildings.

Between 1945 and 1946, German government officials, and others accused of "war crimes" from the National Socialist period (1933-45) were 'tried' at a tribunal convened by the victorious Allies which became known as the Nuremberg Trials. The Soviet Union had wanted the trials to take place in Berlin, but Nuremberg was chosen because it still had the appropriate facilities, which Berlin did not. Moreover Berlin lay in the Soviet occupation zone. Today these trials, despite a handful of acquittals, are largely regarded as show trials in the best Soviet tradition, where virtually all verdicts were pre-ordained and a travesty of justice. Maurice Bardeche's book Nuremberg or The Promised Land (1948) argued that the true motive of this tribunal was to provide retroactive justification for massive Allied atrocities against Germany and its allies. The famous advocate Dr. August von Knieriem produced a technical legal book deconstructing the legal basis of these trials with heavy criticism.[6] Other renowned scholars have also addressed these trials.[7] The Soviets came under scathing criticism by the junior British counsel, Airey Neave, and Franz von Papen, acquitted at Nuremberg, makes salient points about the tribunal's ludicrous flaws in his Memoirs,[8] not least the ridiculous obsession of the Americans introducing psychiatrists into all aspects of the proceedings.[9]

Nuremberg for many people is still associated with its traditional gingerbread (Lebkuchen) products, sausages, and handmade toys. The first pocket watches — Nuremberg eggs — were made here in the sixteenth century. In the nineteenth century Nuremberg became the "industrial heart" of Bavaria with companies such as Siemens and MAN establishing a strong base in the city. Nuremberg is still an important industrial center with a strong standing in the markets of Central and Eastern Europe. Items manufactured in the area include electrical equipment, mechanical and optical products, motor vehicles, and printed materials. The city is also strong in the fields of automation, energy, and medical technology. Siemens is still the largest industrial employer in the Nuremberg region but a good third of German market research agencies is also located in the city. The Nuremberg International Toy Fair is the largest of its kind in the world. The city also hosts several specialist hi-tech fairs every year, attracting experts from every corner of the globe.

Nuremberg was renowned for its magnificent architecture, dating back over 700 years. Guide books for travellers in the 19th and 20th centuries contained almost entire chapters on Nuremberg.[10] Nuremberg was also an early center of humanism, science, printing, and mechanical invention.

The city contributed much to the science of astronomy. In 1471 Johannes Mueller of Königsberg (Bavaria), later called Regiomontanus, built an astronomical observatory in Nuremberg and published many important astronomical charts. In 1515, Albrecht Dürer, a native of Nuremberg, mapped the stars of the northern and southern hemispheres, producing the first printed star charts, which had been ordered by Johann Stabius. Around 1515 Dürer also published the "Stabiussche Weltkarte", the first perspective drawing of the terrestrial globe. Perhaps most famously, the main part of Nicolaus Copernicus' work was published in Nuremberg in 1543.

Printers and publishers have a long history in Nuremberg. Many of these publishers worked with well-known artists of the day to produce books that could also be considered works of art. In 1470 Anton Koberger opened Europe's first print shop in Nuremberg. In 1493, he published the Nuremberg Chronicles, also know as the World Chronicles (Schedelsche Weltchronik), an illustrated history of the world from the creation to the present day. It was written in the local Franconian dialect by Hartmann Schedel and had illustrations by Michael Wohlgemuth, Wilhelm Pleydenwurff, and Albrecht Dürer. Others furthered geographical knowledge and travel by map making. Notable among these was navigator and geographer Martin Behaim, who made the first world globe.

The cultural flowering of Nuremberg, in the 15th and 16th centuries, made it the center of the German Renaissance. In 1525, Nuremberg accepted the Protestant Reformation, and in 1532, the religious Peace of Nuremberg, by which the Lutherans gained important concessions, was signed there. During this period, too, it continued as a centre of art and learning and took an active part in the introduction of the Reformation. Regiomontanus the mathematician, Martin Behaim the cosmographer, Christoph Scheurl and Willibald Pirkheimer the scholars, and Hans Sachs the poet, all resided at Nuremberg. Sculptors such as Veit Stoss and Peter Vischer are also associated with Nuremberg.

Composed of prosperous artisans, the guilds of the Meistersingers flourished here. Richard Wagner made their most famous member, Hans Sachs, the hero of his opera Die Meistersinger von Nürnberg. Baroque composer Johann Pachelbel was born here and was organist of St. Sebaldus Church.

Nuremberg is also famous for its Christmas market, which draws well over a million shoppers each year. The market is famous for its handmade ornaments and delicacies.