Franz Joseph Hermann Michael Maria von Papen, Erbsälzer zu Werl und Neuwerk (b. 29 October 1879; d. 2 May 1969) was a German nobleman and officer of the Prussian Army, the Imperial German Army and the preliminary Reichswehr as well as a politician and Chancellor of Germany for The Centre Party, and later served as a diplomat. Despite Allied attempts to the contrary, he was acquitted at their Show Trials in Nuremburg. Von Papen was the recipient of many awards, decorations and honours, 1960 he was named "Papal Secret Chamberlain" (Päpstlicher Geheimkämmerer) by Pope John XXIII. 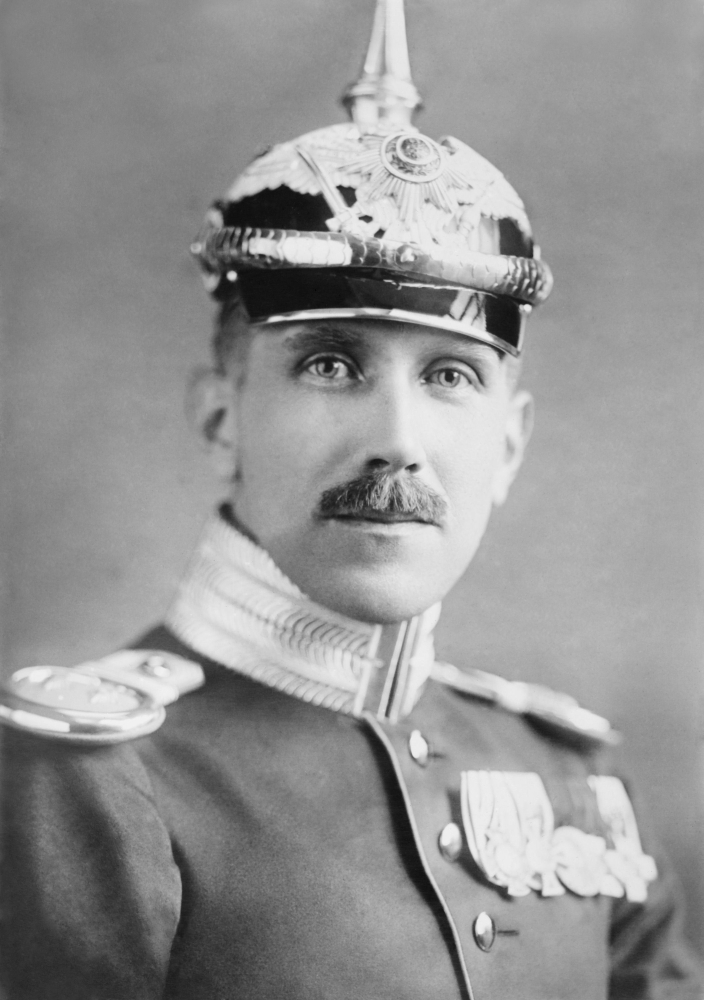 Hauptmann i. G. von Papen as the German Military Attaché in Washington, D.C. (1914) 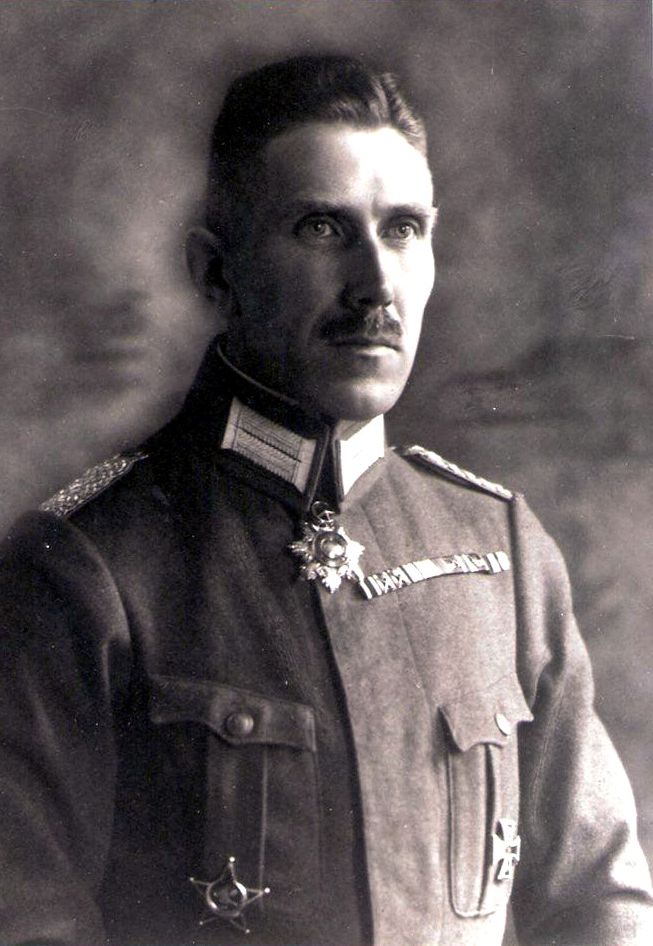 Major i. G. Franz von Papen serving with the German mission (de) in the Ottoman Empire 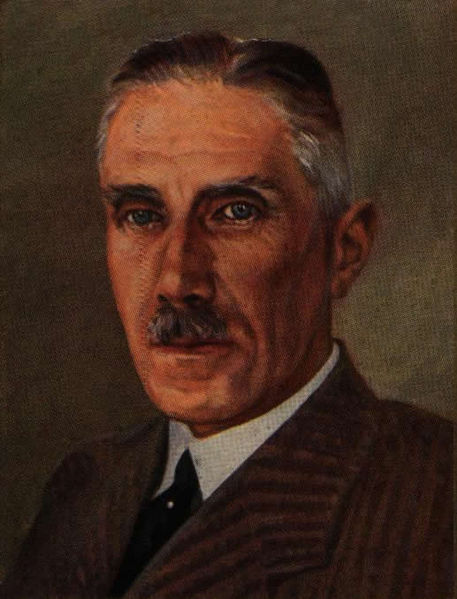 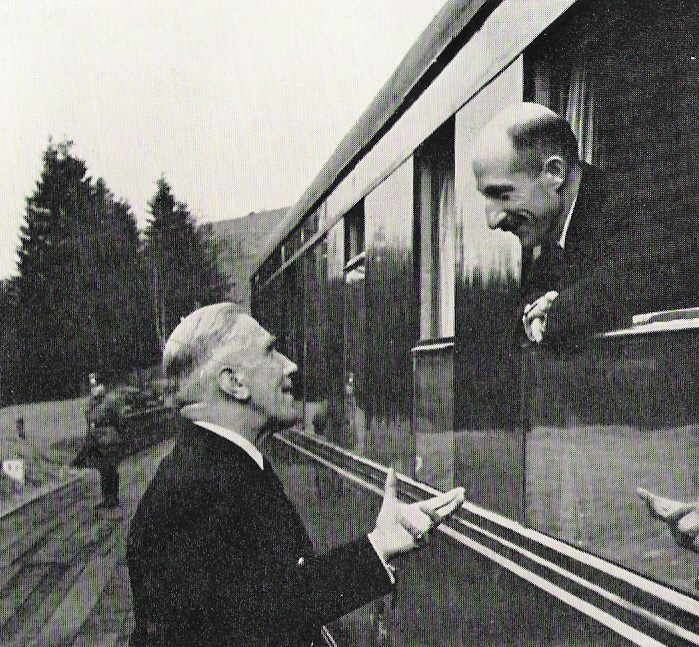 Von Papen chatting to King Boris of Bulgaria in April 1941 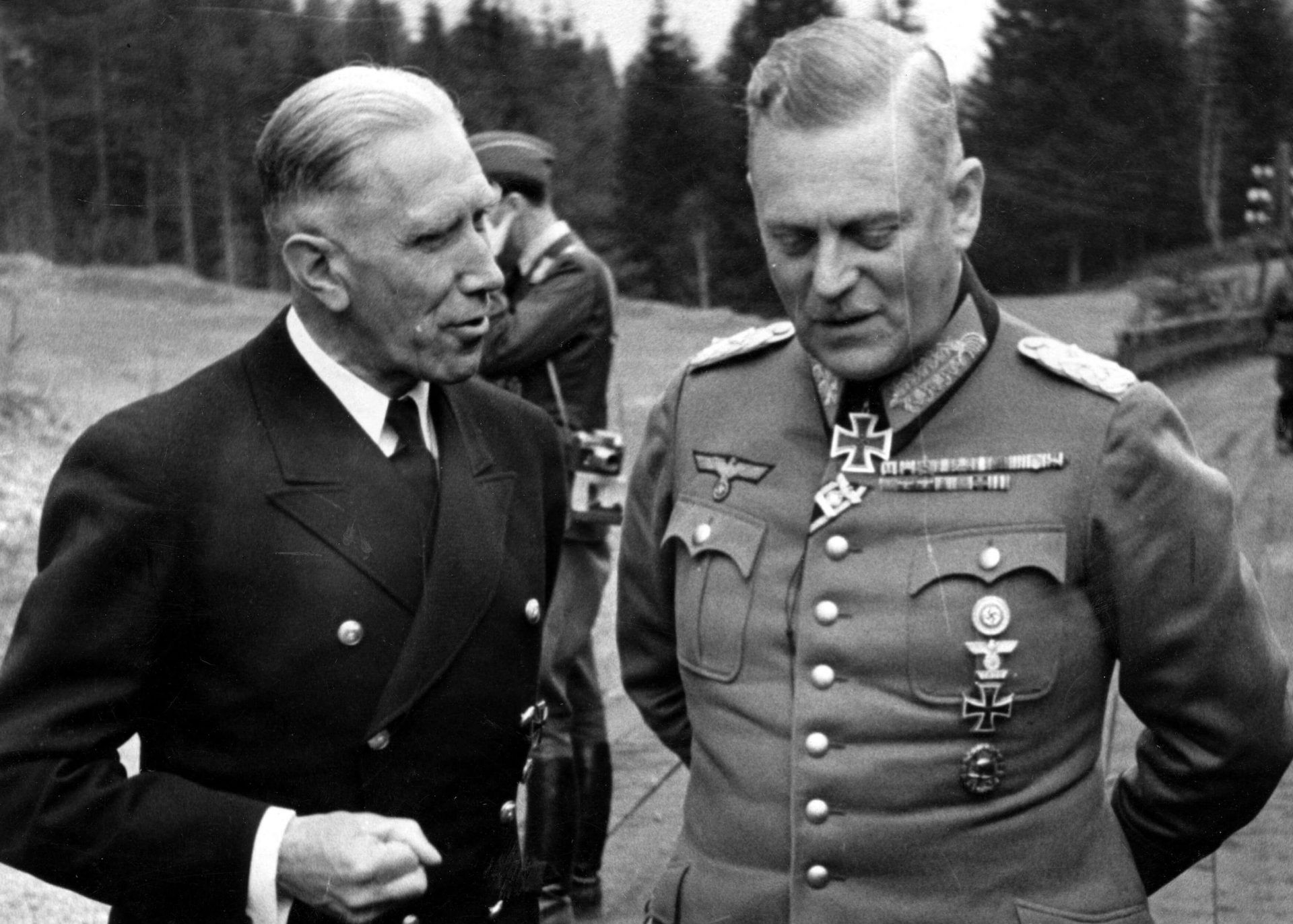 Born to a noble and wealthy Catholic family in Westphalia, his father had served in the wars of 1864, 1866 and 1870 as an officer in the Dusseldorf Uhlan regiment. The family's origins can be traced back to Charles the Great. Von Papen was accepted as an Army Cadet in April 1891, and in the Spring of 1897 he was among the 90 out of 600 new ensigns to pass with sufficiently high marks to remain in the selection for under-officers class. As a result he also entered the Imperial Corps of Pages, attending Kaiser Wilhelm II on State occasions, which brought him into intimate contact with the Imperial Family. He spent the years 1902-4 in the cavalry school at Hanover, during which time he took leave to make his first visit to England, which he greatly admired (he paid another short visit to England in November 1913).

In May 1905 von Papen married the youngest daughter of Privy Councillor von Boch-Galhau, and moved to Berlin where he spent three years at the Staff College. In April 1911 he was accepted for General Staff duties under Field-Marshal Count Schlieffen, and as a permanent member on March 9, 1913. He was then offered the position of Military Attaché in Washington DC. In December he was granted an audience with the Kaiser, who retained him for luncheon and gave him a special message of good wishes for Theodore Roosevelt whom he rather liked.

At the end of 1915 von Papen was declared persona non grata by the US government, although no specific charges were made against him. Returning to Germany he was debriefed and then sent to Flanders on the Western Front to the 93rd Reserve Infantry Regiment of the 4th Guards Infantry Division, as Battalion Commander, and took part in the Battle of the Somme in The Great War; in April 1917 he was in the battles at Vimy Ridge and Arras. In June 1917 he was appointed Operations Officer in the Falkenhayn Army Group and was despatched to Mesopotamia, and later Palestine and the Levant, in the Ottoman Empire.

Returning to Germany on 6 January 1919, he entered politics, joining The Centre Party, in which the monarchist von Papen formed part of the right-wing. The Centre Party was strong in all parts of the country; it was predominantly Roman Catholic, but not overwhelmingly so (some of its Reichstag deputies were Protestants). It was also a socially balanced party, which made its leadership more pragmatic. By 1925 no government could command a parliamentary majority without them. In 1928 Heinrich Brüning became head of their Reichstag delegation, and on March 27, 1930, Chancellor. Thereafter he had nothing but trouble & obstruction in the Reichstag from the DNVP, DVP, Communist and National Socialist parties and a General Election was called for September 14.

The Communist party polled 4,600,000 votes giving them 77 seats, more than the DNVP, and the National Socialist’s vote was 6,400,000 giving them 107 seats, all of which worried Brüning.[1] Civil unrest, the depression, and almost 6 million out of work meant deadlock for Bruning. His Reichstag dependence upon the SPD was also resented. On May 30, 1932 he resigned.[2]

General Kurt von Schleicher, a friend of Reichspräsident Paul von Hindenburg’s son Oskar (de), urged the old man to appoint Franz von Papen as Brüning’s successor, with Schleicher as Defence Minister, which he did on 1 June 1932. As the new Chancellor, von Papen had to deal with widespread street violence between the Communists and National Socialists in which over 116 people were killed that summer in Prussia alone. On 20 July 1932, von Papen deposed the socialist Prussian State Government by decree on the grounds that it was incapable of maintaining public order, and became himself Reich Commissioner with full powers over that state. This appears to have been a popular action. However, a new General Election was called on 31 July 1932, which increased the National Socialist deputies from 107 to 230.

A meeting with Adolf Hitler was organised by von Schleicher at Furstenberg on 5 August, where Hitler demanded full power. On 13 August 1932, von Papen and von Schleicher rejected all his demands offering him instead Vice-Chancellorship in the existing cabinet. That afternoon Hitler told President von Hindenburg that he would not be supporting the government. The government fell and new elections were called for 6 November 1932, where, due to a number of social and other factors, Hitler’s party lost 2 million votes, losing them 34 seats, while the Communist Party gained 11.[3]

Von Papen, weary of attempts to persuade Hitler to abandon his isolationism, had, in collaboration with his Minister of the Interior, Baron von Gayl, a Junker, devised a basic constitutional reform that was to be effected by presidential authority and would transfer the democratic Republic into an authoritarian corporative state, in which popular sovereignty would be eliminated and a propertied elite would rule over the great mass of the underprivileged. Doubtless the collaboration between the Nazis and Communists in a transport strike which had tied up the whole city of Berlin assisted von Papen’s mentality. General von Schleicher met with von Hindenburg in a tense meeting on December 1 to persuade the President that von Papen’s scheme was mad, dangerous and superfluous. The following day he succeeded, the President fearing civil war dismissed von Papen and appointed von Schleicher Chancellor. [4]

His political skills and scheming, however, led to nothing and on 28 January 1933, he resigned. Von Papen was again invited to form a new government. However, he now saw that this was impossible and that the only way to get the support of the National Socialists, which a government would need if it were to be strong enough to restore stability and stop the growth of communism, was to give Hitler the post he coveted. He therefore held talks with their leadership and the heads of the various nationalist groupings in order to find the right combination.

By 30 January 1933, agreement had been reached and presidential assent secured. Hitler became Chancellor in a coalition cabinet, with von Papen as Vice-Chancellor. The only other Nazis in the cabinet were Wilhelm Frick as Minister of the Interior, and Hermann Goering as Minister without Portfolio. Von Papen seemed to think that by this arrangement Hitler could be controlled.[5] Once Hitler was in power, however, von Papen and his conservative and Roman Catholic allies were quickly marginalized.

In his Memoirs, von Papen said that he had a long conversation with Hitler in March 1934 on the restoration of a constitutional monarchy upon the death of President von Hindenburg. He expressed

"surprise at how willingly Hitler fell in with the idea. He was full of praise for some of the great Prussian kings and felt the public should again be drawn to their great services. But Hitler insisted that the internal situation in the country must first be consolidated and all treaty limitations on sovereignty removed before a monarch could hope to maintain his position. He had no objections to the Hohenzollern dynasty [...] he did not consider the Crown Prince a suitable candidate, nor his brother, Prince August Wilhelm, even though the latter had joined the Nazi Party. We agreed that one of the sons of the Crown Prince should be given first consideration. We also agreed that whoever we chose should be found employment in the Chancellery in order to get some insight into the affairs of State. When we had reached agreement, I went to see von Hindenburg and discussed with him quite openly the problem of his succession [...] He thought well of the idea and asked me to draft a suitable document."[6]

This von Papen did, drawing up a draft for a constitutional monarchy as the next form of government for Germany, laying it before the President the following month. Von Hindenburg now wondered if the time was ripe for such a proposal, however, and locking the proposal in his drawer said his recommendations concerning the return of the monarchy would be expressed, as his last wish, in a private letter to the Chancellor (Hitler). This and other documents eventually were handed to Hitler on August 15 who read through them "with great care" and discussed them with von Papen & his secretary Tschirshky. Nothing further came of this proposal.[7]

Von Papen retired from the Vice-Chancellorship in the summer of 1934, following the Night of the Long Knives, during which he was arrested and put under house arrest for three days but released without charge.

Von Papen then entered diplomatic service. On or about July 6/7, 1934, Hitler's State Secretary, Dr.Lammers, was sent to von Papen to suggest that he should take up the post of Ambassador to the Vatican. He declined, but then served as Germany's Ambassador to Austria from July 27 (not arriving in Vienna until August 15), 1934 to March 1938. However, on July 11, 1936 Hitler made von Papen the offer of sending him to London as Ambassador, although von Papen said he felt he had to remain in Vienna. He was subsequently Ambassador to Turkey from April 1939 to August 5,1944, proceeding upon return to Hitler's Headquarters in East Prussia where von Papen told Hitler of the pressures the Allies were placing upon the Turks. He also urged Hitler to "concentrate all our forces on keeping the Soviets as far away from Germany's frontiers as possible." At the conclusion of this audience Hitler presented von Papen with the Knight's Cross of the Military Merit Order.[8]

Franz von Papen was arrested at his daughter's home on April 9, 1945 by a unit of the US Army and taken to Wiesbaden, and then to Rheims for interrogation. He was then removed to Chateau de Lesbioles, near Spa, where he was soon joined by Admiral Horthy, the Regent of Hungary who was incensed at being treated as a prisoner by the Americans. In May they were moved to the Grand Hotel at Mondorf, near Luxemburg, where their treatment deteriorated drastically. In August von Papen, and others, were flown to Nuremberg. He was subsequently one of the defendants at the main Nuremberg War Crimes Trial, but was acquitted on September 30, 1946 and released, going to a friend's house in Nuremberg, but still under police watch. In the middle of January 1947 von Papen was informed that the Bavarian Denazification Minister[9], Alfred Loritz, had given orders that he should be tried again.[10]

The court was composed of seven members, of whom one was a Communist, two Social Democrats (socialists), one Liberal and one Christian Democrat. The Judge, Camille Sachs, and his deputy, were Jews and also members of the socialist SPD, so a universally Left-wing bench. Loritz demanded a 10 year sentence. The Court finally condemned von Papen to eight years in a US-operated labour camp, confiscation of all his property, and lifelong deprivation of civic rights. In January 1949 an appeal was heard, where one of the members of the court left his lawyers in no doubt that an acquittal would immediately be appealed against by Dr. Sachs who had in the meantime had become Denazification Minister and that he would be immediately re-arrested. His only realistic option was to go for a reduction of his sentence, which was successful, being reduced and he was released, but placed under certain restrictions for five years.