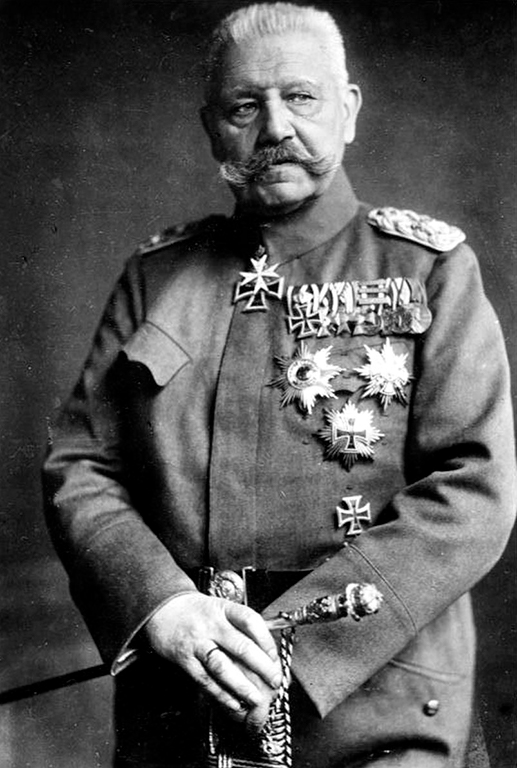 Paul Ludwig Hans Anton von Beneckendorff und von Hindenburg, known universally as Paul von Hindenburg (b. 2 October 1847 in Posen; d. 2 August 1934 at his Neudeck estate, East Prussia), was a German officer of the Prussian Army and the Imperial German Army, finally Generalfeldmarschall and from 12 May 1925 until his death Reichspräsident of Germany. 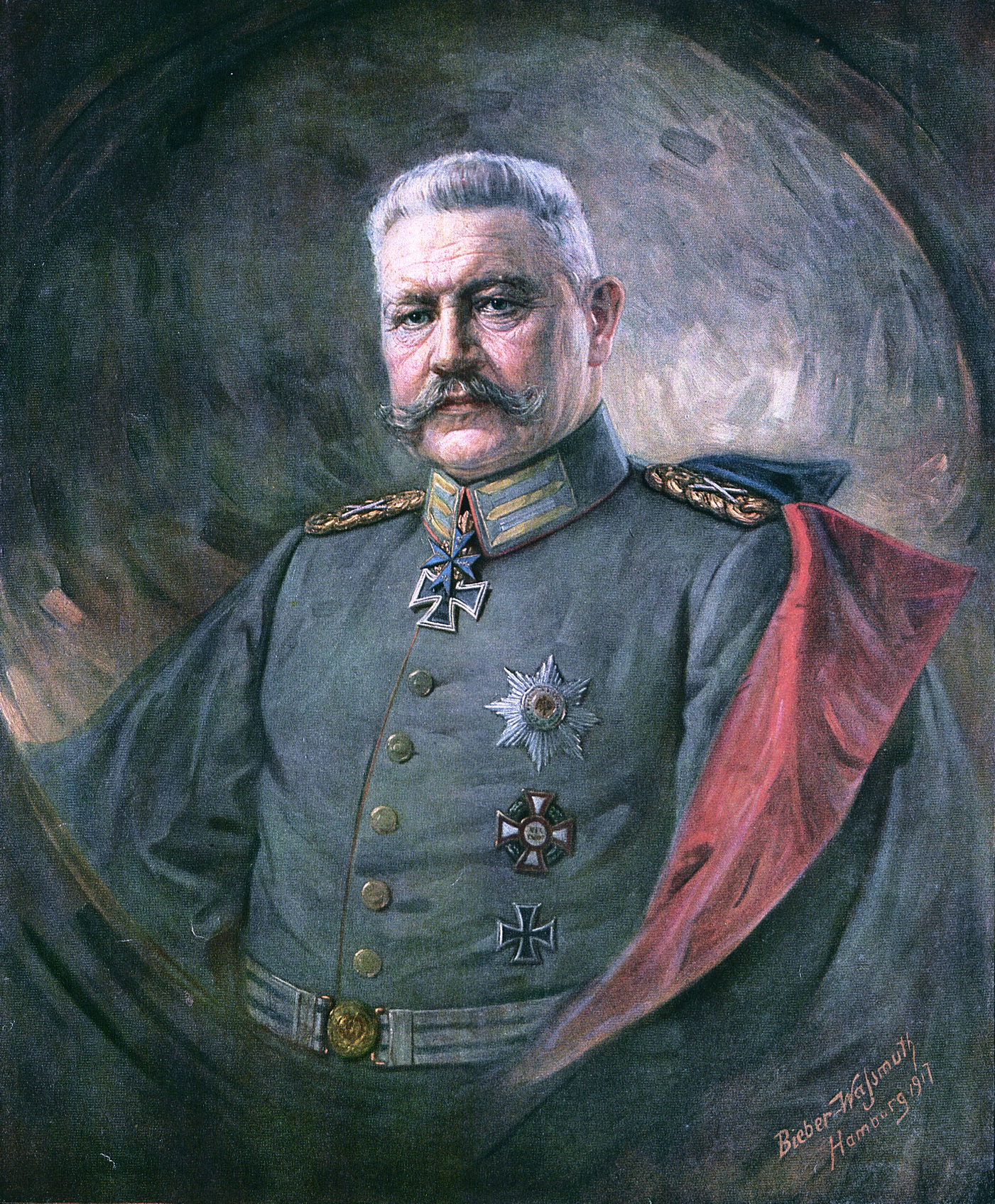 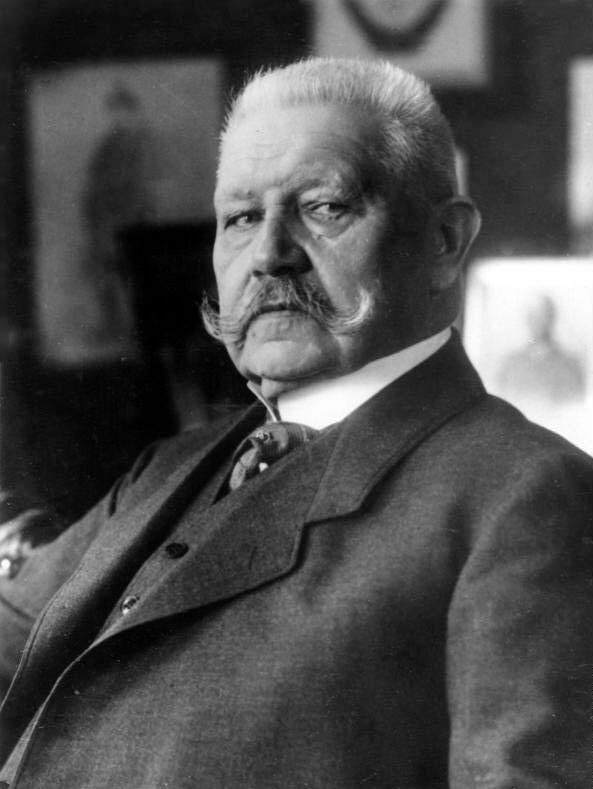 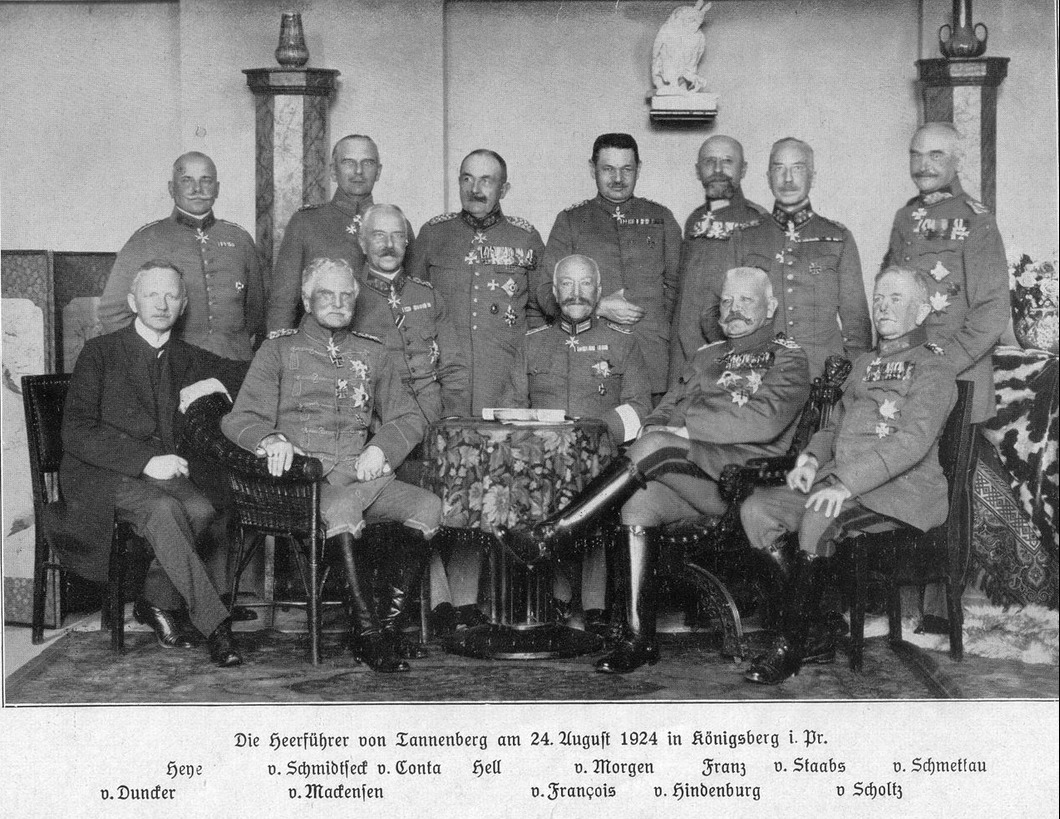 Hindenburg enjoyed a long if undistinguished career in the Prussian army, eventually retiring in 1911. He was recalled at the outbreak of the First World War, and first came to national attention, at the age of sixty-six, as the victor at Tannenberg in 1914. As Germany's supreme commander from 1916, he and his chief of staff, Erich Ludendorff, rose in the German publics esteem until Hindenburg came to eclipse the Kaiser himself. Hindenburg retired again in 1919, but returned to public life one more time in 1925 to be elected as the second President of Germany.

Though 84 years old and in poor health, Hindenburg was obliged to run for re-election in 1932 as the only candidate who could defeat Adolf Hitler, which he did in a runoff. In his second term as President, he did what he could to oppose the NSDAP rise to power, but was eventually obliged to appoint Hitler as Chancellor in January 1933. In March he signed the Enabling Act of 1933 which gave special powers to Hitler's government. Hindenburg died the next year, after which Hitler declared the office of President vacant and made himself Head of State.

The famed zeppelin Hindenburg that was destroyed by fire in 1937 had been named in his honour, as is the causeway joining the island of Sylt to mainland Schleswig-Holstein, the Hindenburgdamm, built during his time in office.

His paternal grandparents were Eleonore von Brederlow (d. 18 February 1863) and her husband Otto Ludwig von Beneckendorff und von Hindenburg (1778 – 18 July 1855), by whom he was still a remote descendant from the illegitimate daughter of Heinrich VI, Count of Waldeck. He was also a descendant of Martin Luther.

After his education at the Kadettenkorps Wahlstatt and Berlin cadet schools, he entered the military as a Sekondeleutnant (3. Garde-Regiment zu Fuß in Berlin), fought in the Austro-Prussian War (1866) and the Franco-Prussian War (1870–1871). Hindenburg remained in the army, eventually being promoted to general in 1903. Meanwhile, he married Gertrud von Sperling, also an aristocrat, by whom he two daughters, Irmengard Pauline (1880) and Annemaria (1891), and one son, Oskar (1883).

He retired from the army for the first time on 18 March 1911, although put at disposal of the Generalstab, but was recalled on the outbreak of World War I on 22 August 1914 by the Chief of the General Staff, Helmuth von Moltke. Hindenburg was given command of the Eighth Army (8. Armee), then locked in combat with two Russian armies in East Prussia on the Eastern Front.

Hindenburg was victorious in the Battle of Tannenberg and the Battle of the Masurian Lakes against the Russian armies. Although historians attach much of the credit to the then little-known staff officer Max Hoffmann, these successes made Hindenburg a national. On 18 September 1914 he took over the Ninth Army, on 1 November 1914 he was given the position of Supreme Commander East (Ober-Ost), on 27 November 1914 he was promoted to the rank of field marshal.

Hindenburg succeeded Erich von Falkenhayn on 29 August 1916 as Chief of the General Staff, although real power was exercised by his deputy, Erich Ludendorff. From 1916 onwards, Germany became an unofficial military dictatorship, often called the "Silent dictatorship" by historians.

In September 1918, Ludendorff advised seeking an armistice with the Allies, but in October, changed his mind and resigned in protest. Ludendorff had expected Hindenburg to follow him by also resigning, but Hindenburg refused on the grounds that in this hour of crisis, he could not desert the men under his command. Ludendorff never forgave Hindenburg for this. Ludendorff was succeeded by Wilhelm Groener, a staff officer who served as Hindenburg's assistant until 1932. In November 1918, Hindenburg and Groener played a decisive role in persuading the Kaiser Wilhelm II to abdicate for the greater good of Germany. On 30 June 1919 he was definitely retired.

Hindenburg, who was a firm monarchist throughout his life, always regarded this episode of his life with considerable embarrassment, and almost from the moment the Kaiser abdicated, Hindenburg insisted that he had played no role in the abdication and assigned all of the blame to Groener. Groener for his part loyally went along with this in order to protect the reputation of his chief. 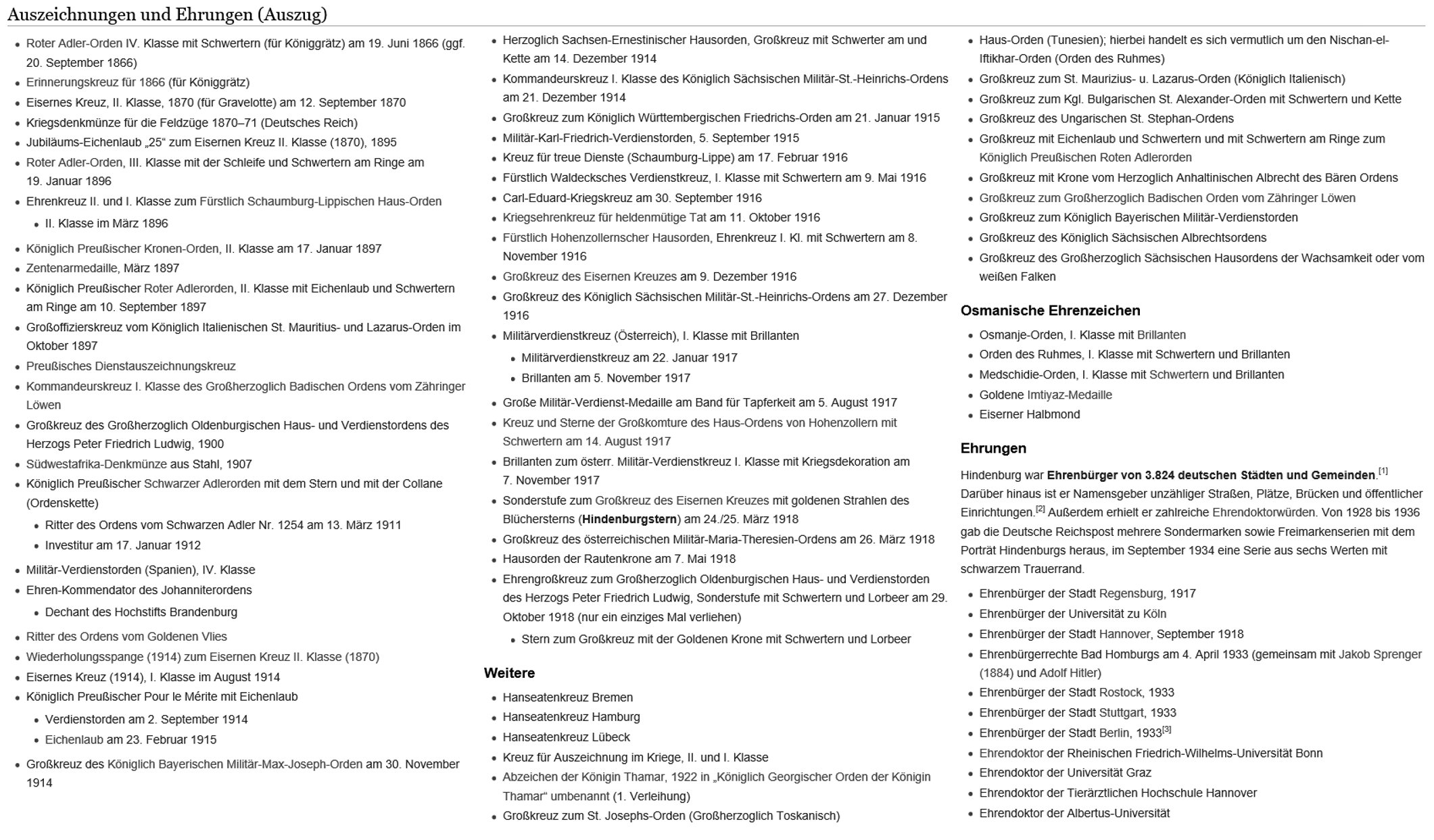 Von Hindenburg was honorary citizen of 3,824 German cities and municipalities. He also had honorary degrees from all German and most Austrian universities.