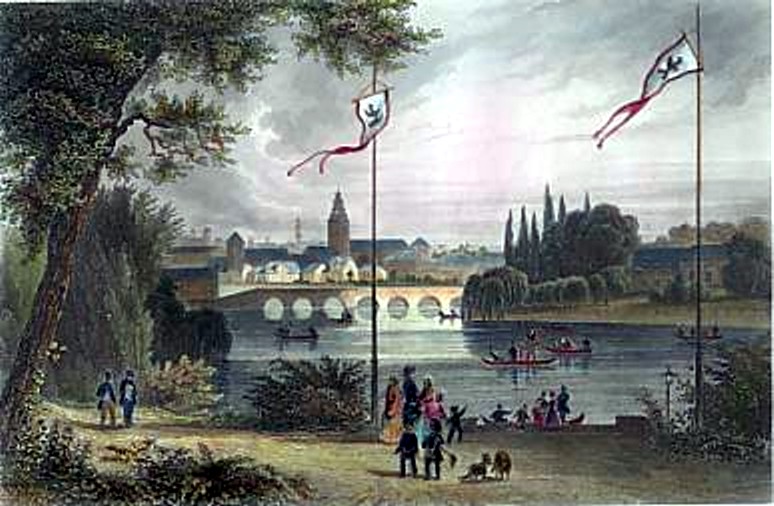 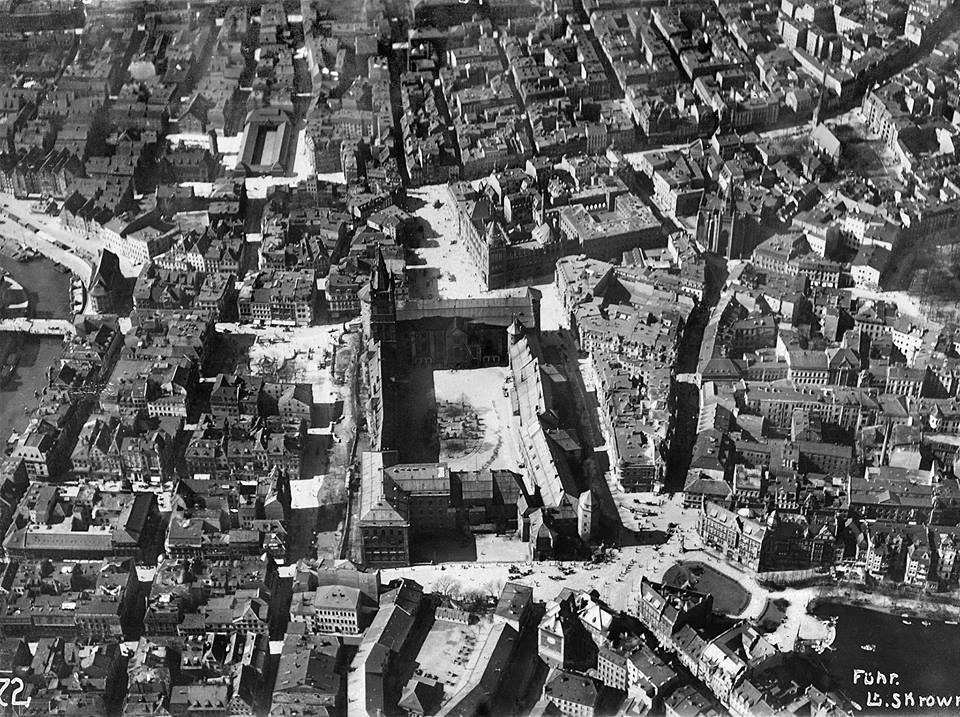 The city centre from the air in 1925, Königsberg Schloss in the centre. 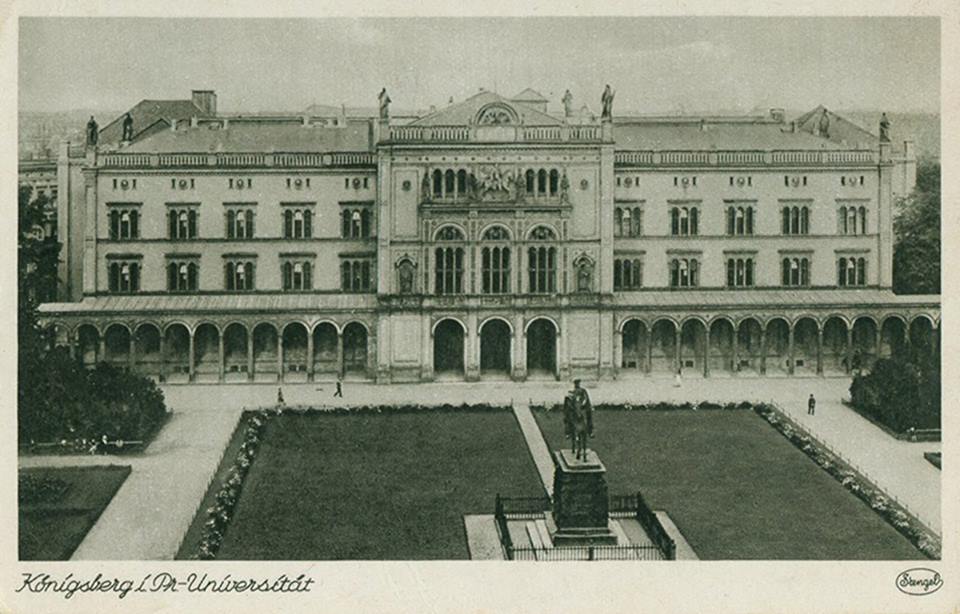 Königsberg University, the Albertina (de) which was destroyed.

Königsberg, on the river Pregel, was the capital city of East Prussia until May 1945. The city was founded about 1255 by the Teutonic Order who named it after their then ally, King Premysl Otakar II of Bohemia. Königsberg was the largest German city in the east until it was conquered and largely destroyed by the Soviet Union on 9 April 1945 during World War II after a heroic struggle by the defenders. In 1946 the Soviet Union renamed the city Kaliningrad after an old Bolshevik.[1] It remains under Russian occupation.

When the Knights of the German Order were dislodged, by treachery, from their castle of Marienburg in 1466, Königsberg then became the capital city of the Teutonic Order's theocratic state of Prussia (Ordensland Preußen) and the seat of the Grand Master of the Order. Between 1519–1521 Königsberg was unsuccessfully besieged by Polish Forces. In 1525 the Grand Master adopted the reformed religion and Königsberg became the capital of the secularised Duchy of Prussia, which united with Brandenburg in 1618, and in 1701 was elevated to the Kingdom of Prussia. From the 1871 unification and federation of Germany to its surrender at the end of World War I, Prussia was part of the German Empire. From 1919-1945 it was part of the German Reich (State).

By the 20th century Königsberg was a major railway terminus with several stations. A ship-canal between Königsberg and Pillau, which enabled vessels of up to a 21 foot draught to moor alongside the town, was also completed in 1901 at a cost of 13 million marks. In 1904 there were 188,000 inhabitants (including a garrison of 9000 men); in 1935 it had increased to 286,666. Between 1945-47 the population suffered incredible privations and death until the entire German population who had survived was expelled by the Soviet Union, who then repopulated the city with Russian settlers. According to the Communists, in 1983 371,000 people resided there, although this figure seems speculative. 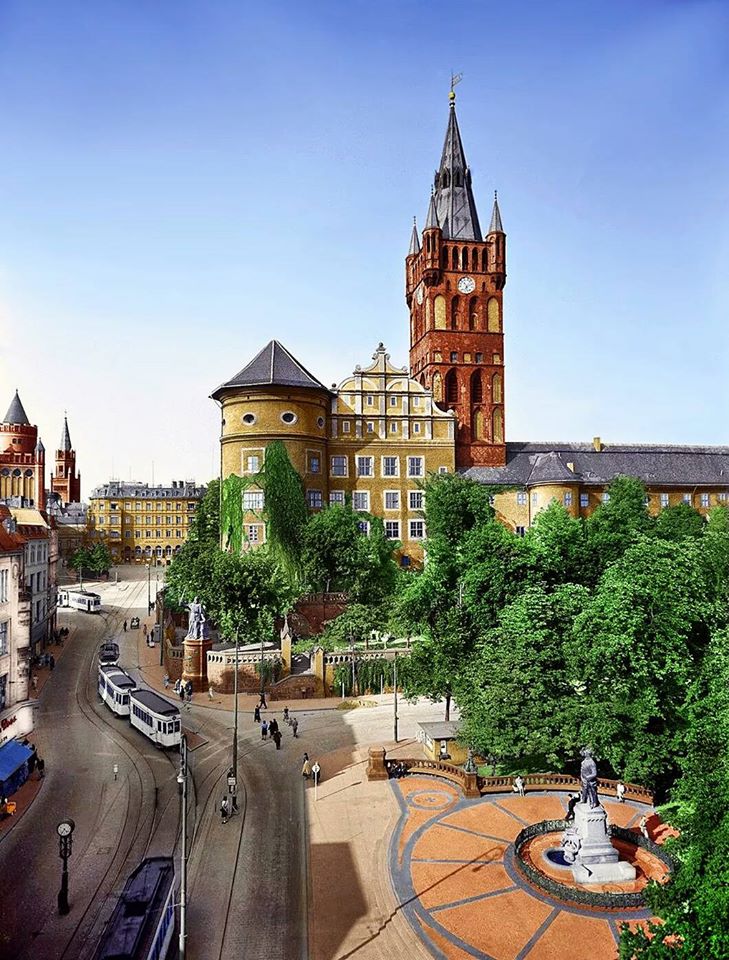 The thirteenth century Königsberg Castle was one of the landmarks of the East Prussian capital and was an Ordensburg of the Teutonic Order. The Order's original castle became quite extensive and was frequently altered in the 16th to 18th centuries. The tower was 330 feet high. The west wing contained the Schloss-Kirche, where Frederick I King of Prussia was crowned in 1701, and Wilhelm 1st in 1861. The Elector Frederick III of Brandenburg and his court retired to Königsberg castle after the Napoleonic disasters of 1807, when schemes by Baron von Stein and von Humboldt were zealously canvassed for the resurrection of Prussia. It is also well-known for containing the apartments of Queen Louise of Prussia. 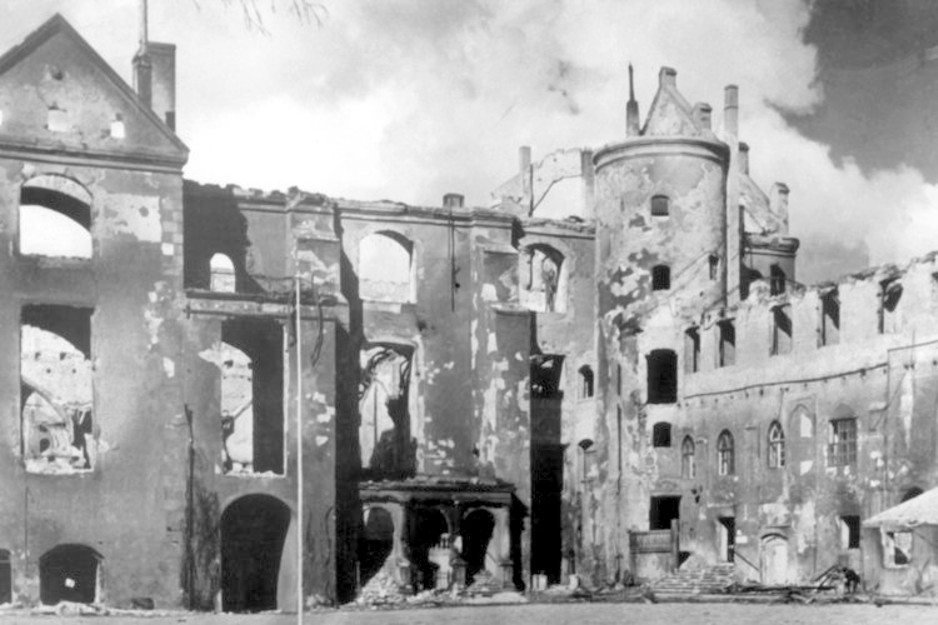 Königsberg schlöss - 800 years of historic culture destroyed by the RAF 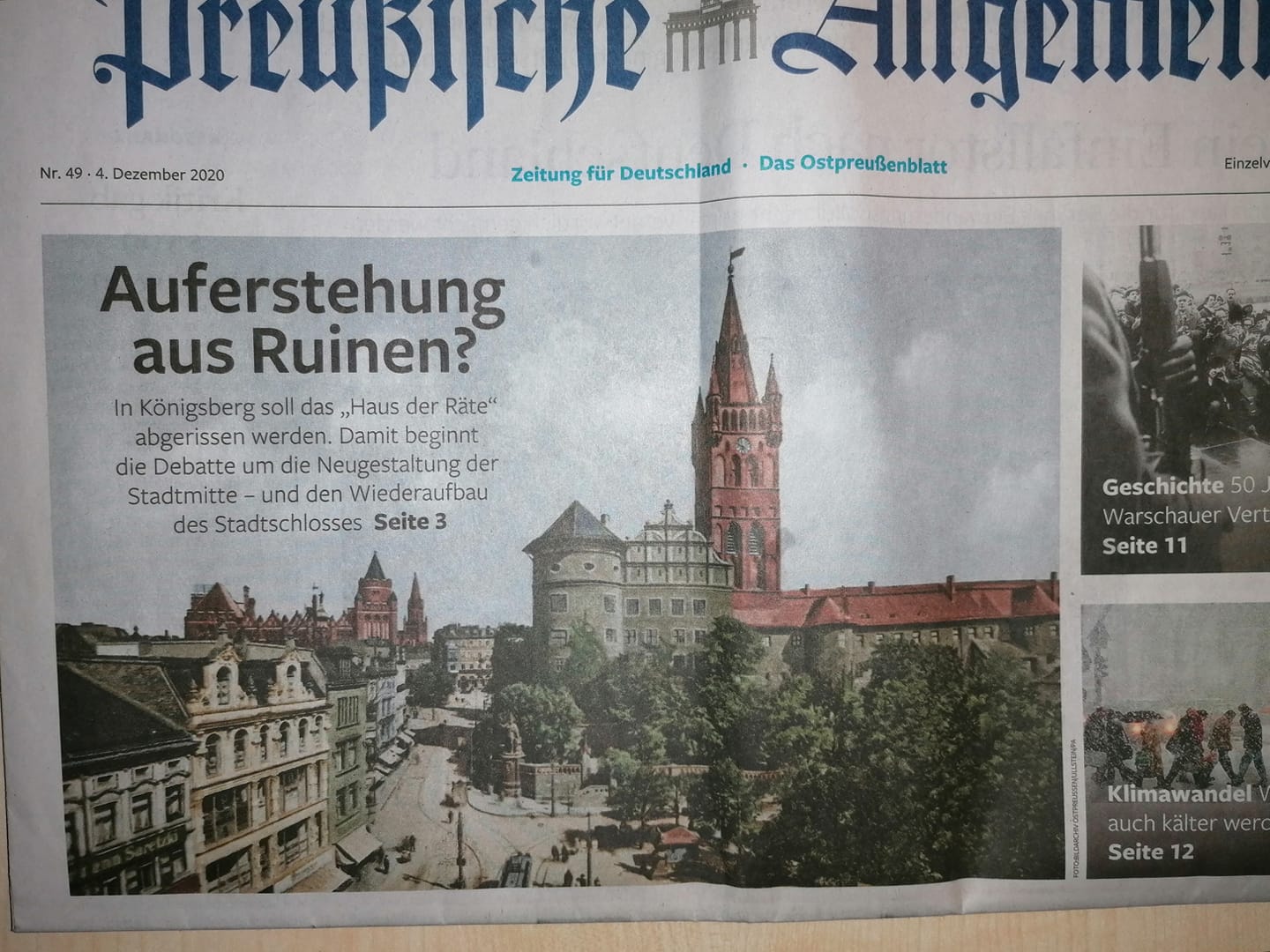 Recent Prussian newspaper calls for the castle to be rebuilt, 4 Dec 2020. 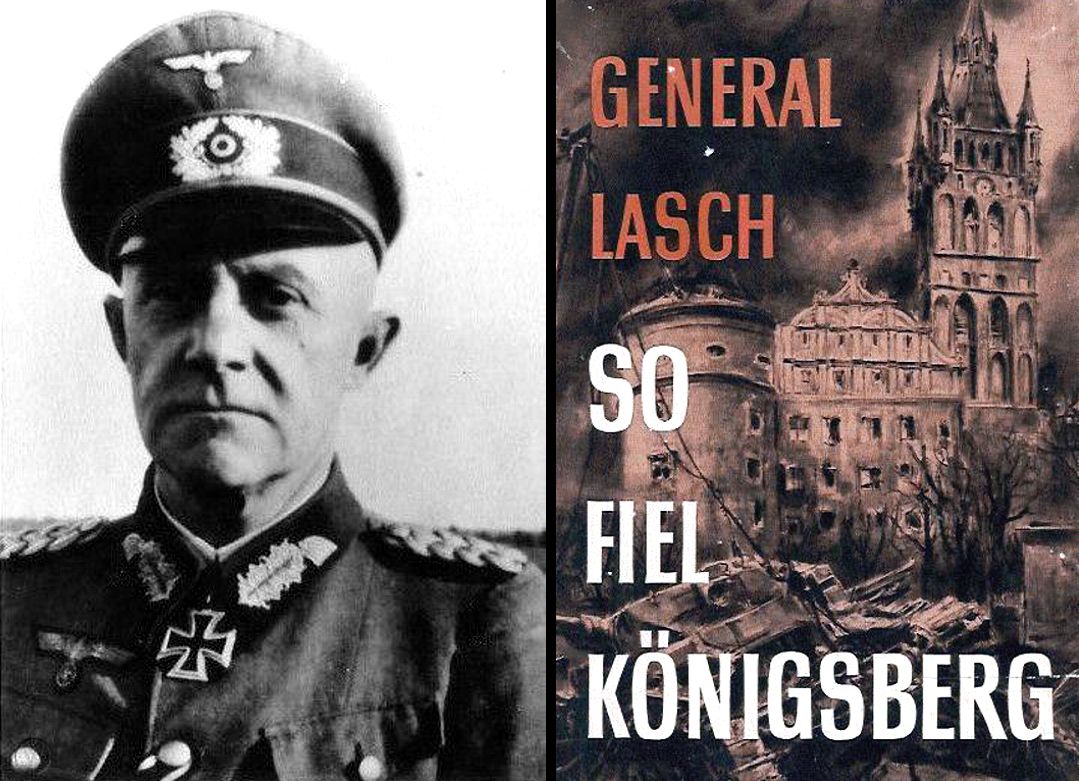 The Bombing of Königsberg was a series of attacks made upon the city of Königsberg in East Prussia during World War II. The Soviet Air Force had made several minor raids on the city after 1941, but it was the extensive terror attacks carried out by the Royal Air Force Bomber Command that destroyed almost all of the city's historic quarters dating back 800 years, in August 1944, killing many thousands of the civilian population. This was one of many bloody war crimes of British "strategic" bombing during World War II. German-Jewish author and musician Michael Wieck, a native of Königsberg, wrote in A Childhood Under Hitler and Stalin that "the people of Königsberg shall never expunge these nights of terror from their memory."

During the final prolonged Battle of Königsberg in 1945, "Festung (fortress) Königsberg" was again heavily bombed. In April a third of the Soviet Air Force focused on the Königsberg region and led incessant bombing and attacks by low-flying aircraft over the city. Air defences by this time were non-existant. There was severe damage to the 19th and 20th century parts of the city/suburbs. "Festung Königsberg" under General Otto Lasch, was also heavily attacked by artillery, during the final weeks of the war. Goebbels recorded that on Saturday 8 April 1945 "Bolsheviks have reached the Main Station as well as the south bank of the river Pregel near its mouth" and the following day he records "the enemy has penetrated deep into Königsberg".[2] It has been said that (like Köln) more than 90% of the city had been destroyed when the Red army fully occupied the city on April 9th, after a heroic defence by Lasch.

In 1939 Königsberg had a population of 372,000. Under Soviet occupation the remaining German population suffered terribly. Fantastic almost indescribable atrocities and massacres occurred in Metgethen, a suburb, in February 1945.[3] In no other German city did hunger lead to so many deaths between 1945-47 as in Königsberg. Terrible hygenic conditions helped the spread of typhoid, dysentry, scabies and malaria epidemics and mortality increased in an unprecedented degree. in this period, when at least 35,000 died. Able-bodied men were put to forced labour and shipped into the Soviet Union.[4] Of the 100,000 Germans still inhabiting the city as of May 8, 1945,[5] only 15,000 were still alive to be forcefully expelled (German: Vertreibung) in 1948.