The Social Democratic Party of Germany (German: Sozialdemokratische Partei Deutschlands, SPD) is a socialist political party in Germany and was one of the first Marxist parties in the world. It was the party which proclaimed the end of the monarchy and a Republic on 9 November 1918. So far to the Left were the SPD that 132 of its members took part in the communist Antifa Congress at Neukoln in Berlin in July 1932.

In the September 2021 General Elections it became the largest party in the Bundestag (206 seats) and one of the two major political parties in Germany along with the Christian Democratic Union of Germany (CDU) (196 seats). Following the election results its leader, Olaf Scholtz, said it would no longer work in a coalition with the CDU, and instead would work with the Far-Left Green Party (118 seats) and, oddly, the liberal pro-business Free Democratic Party (FDP)(92 seats).[1] These three parties subsequently reached a coalition government agreement which was announced on 7 December 2021.[2][3] leaving the CDU out in the cold.

In December 2021 the SPD's leader, Olaf Scholz, was elected Chancellor of Germany.[4]

The party was founded in 1863 by a committed Jewish socialist, Ferdinand Lassalle, whose family lived in Breslau. During the German Revolutions of 1848, he spoke at public meetings in favor of the revolutionary cause and urged the citizens of Düsseldorf to prepare themselves for armed resistance in advance of the violence that he expected. He was subsequently arrested for his involvement in this activity and he was charged with inciting armed opposition to the state. He was later tried on a lesser charge of inciting resistance against public officials and convicted, serving six months in prison. He was killed in a duel by an aristocrat, and was buried in the Jewish cemetery in Breslau.[5]

Following the exhaustive collapse of Germany in October/November 1918, The SPD's Philip Scheidemann proclaimed a Republic at 2 p.m. on November 9th from the steps of the Reichstag. Prince Max of Baden resigned as Chancellor that evening and was replaced by the SPD's Friedrich Ebert.[7] The more violent revolutionary socialist members now left the SPD and joined the Spartacus League (which became the pro-Soviet Communist Party of Germany) following World War I and took part in the failed German Revolution of 1918–19.[8] The Party's Heidelberg Program of 1925 called for "the transformation of the capitalist system of private ownership of the means of production to social ownership".[9]

One of its prominent Reichstag deputies during Weimar Germany was Otto Landsberg. Otto Wels was the chairman of the SPD between 1919 and 1933.

The Party was banned by the National Socialists in 1933. 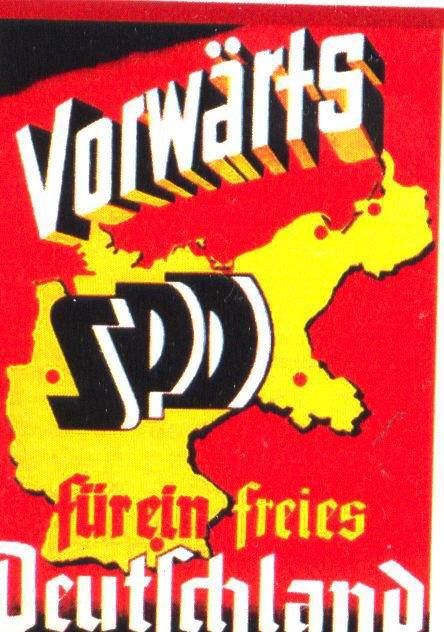 SPD poster for restoration of Germany

After World War II the SPD was re-established in the occupation zones of West Germany in 1945. In East Germany it was forced to merge with the German Communist Party (KPD) to form the Socialist Unity Party of Germany. In the 1959 Godesberg Program, the West Germany SPD said it would drop its commitment to Marxism, to become an umbrella party of the broad left.

In West Germany, the SPD became one of two major parties alongside the CDU and CSU. For over two decades after the end of the war all three campaigned against the Soviet-instituted eastern borders of Germany, and for the return to Germany of the provinces illegally occupied by Poland. After 1970 the SPD and CDU quietly dropped this commitment, seen by many as a national betrayal.[10] Six years earlier Chancellor Kohl had quietly assured the communists that the Bonn government were dropping its claims to its occupied eastern provinces.[11]

The SPD is committed to the European Union.

The SPD is responsible for the introduction of Hate Crime legislation in Germany making it illegal and a jailable offence to question or comment upon any aspect of the so-called Holocaust.