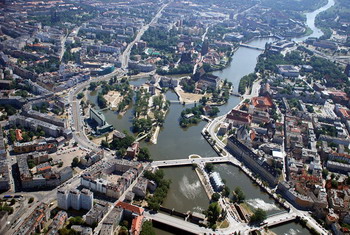 Breslau (Latin: Wratislavia; Polish: Wroclaw) is a German city in Silesia 390 feet above sea-level, occupied (since 1945) by Poland. It lies in a fertile plain on both banks of the river Oder at the influx of the river Ohle. The islands formed here by the Oder are connected with the banks by numerous bridges. The city consists of the Altstadt and continuously increasing suburbs. In 1904 there were 423,000 inhabitants including 5,900 Jews.[1] By 1910 the population had passed 500,000 and in 1985 it was estimated at 637,200.[2] 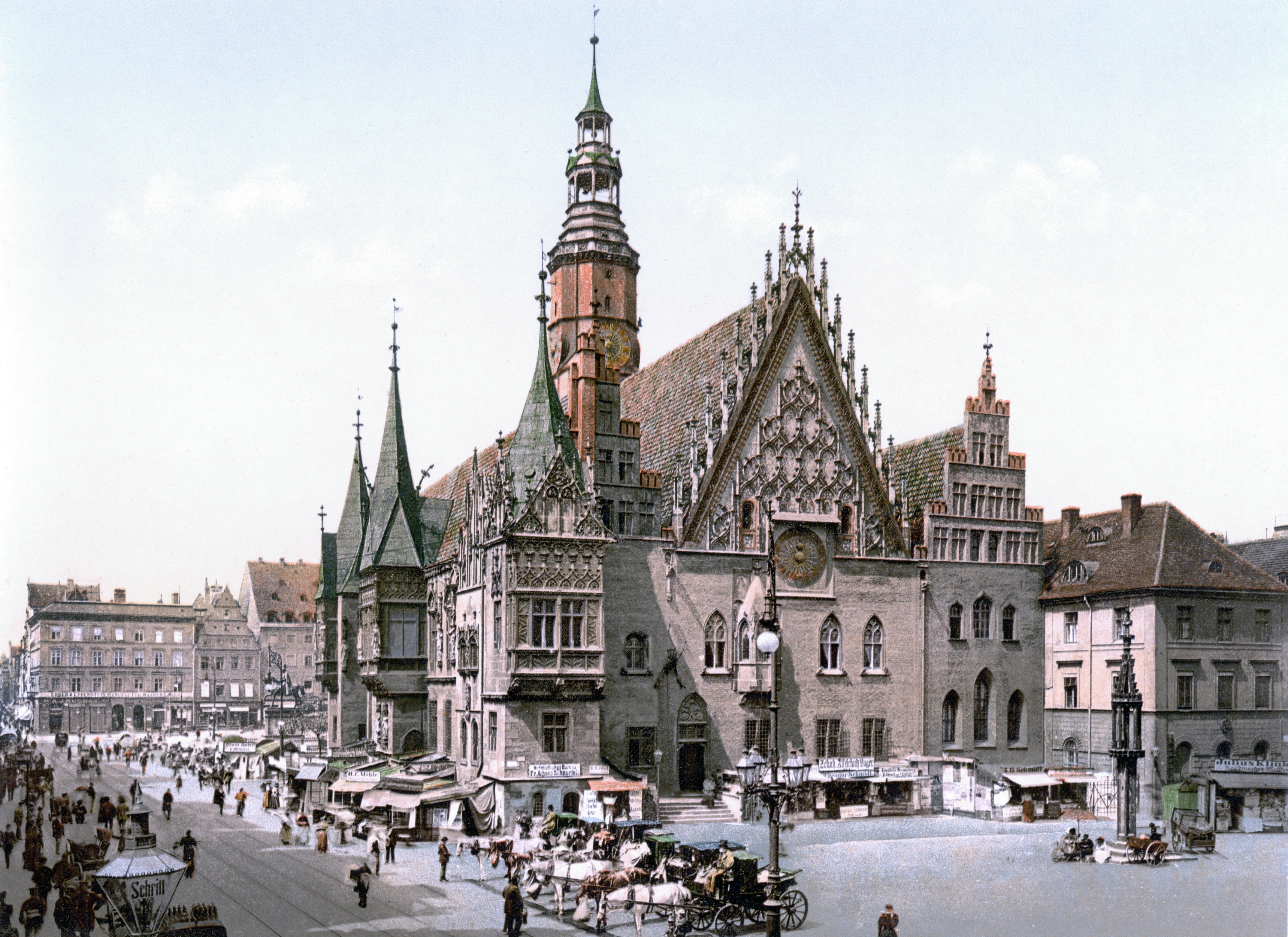 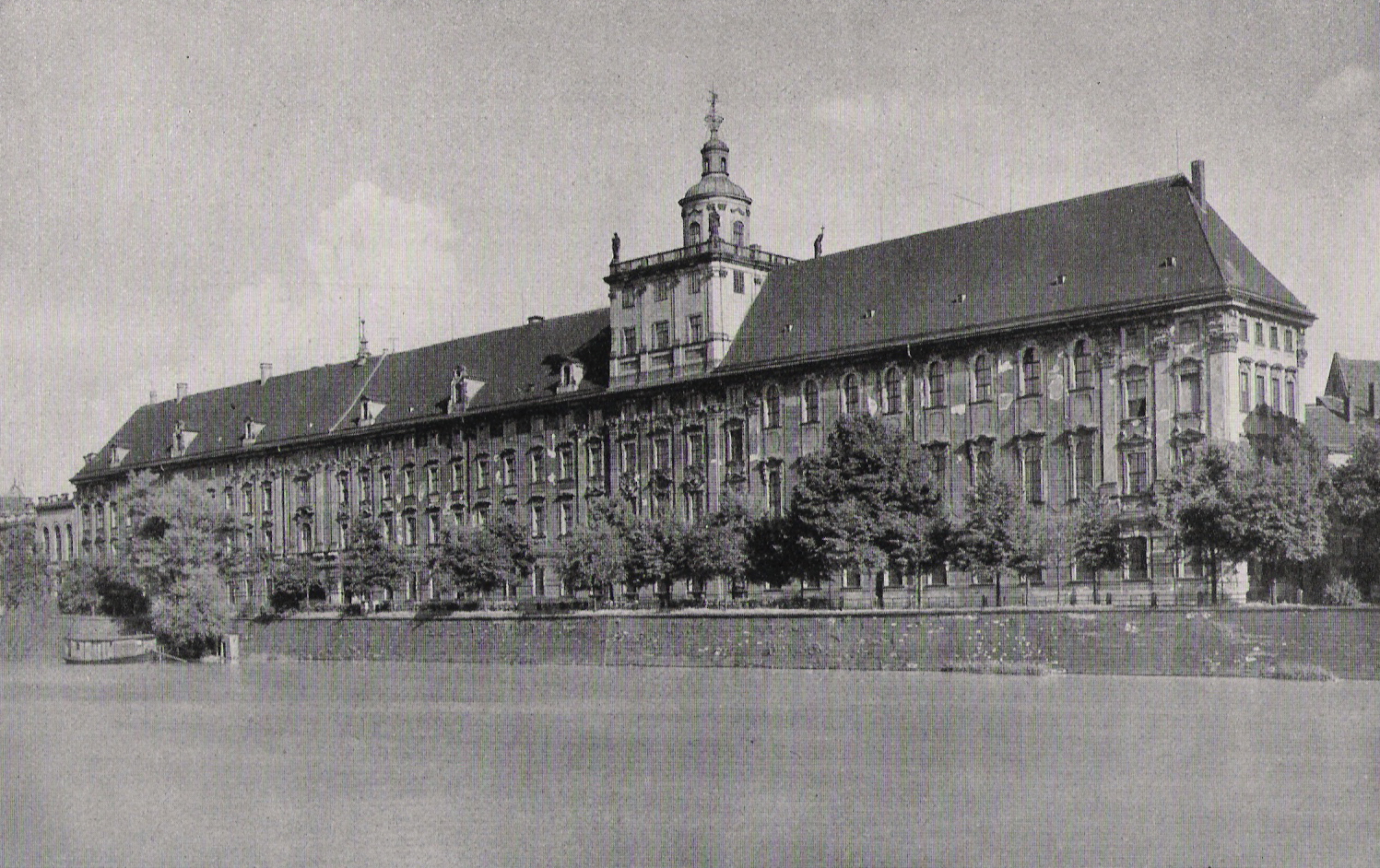 Breslau University, built 1728-39 by the Habsburgs. 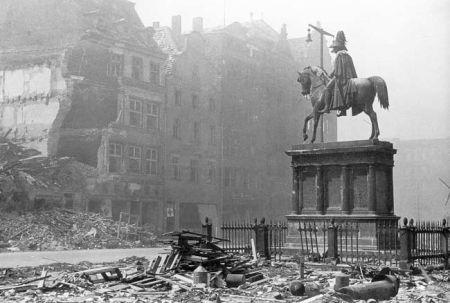 Central Breslau May 1945 after surrender. The equestrian statue is of Prussian King Friedrich Wilhelm III, by August Kiss. 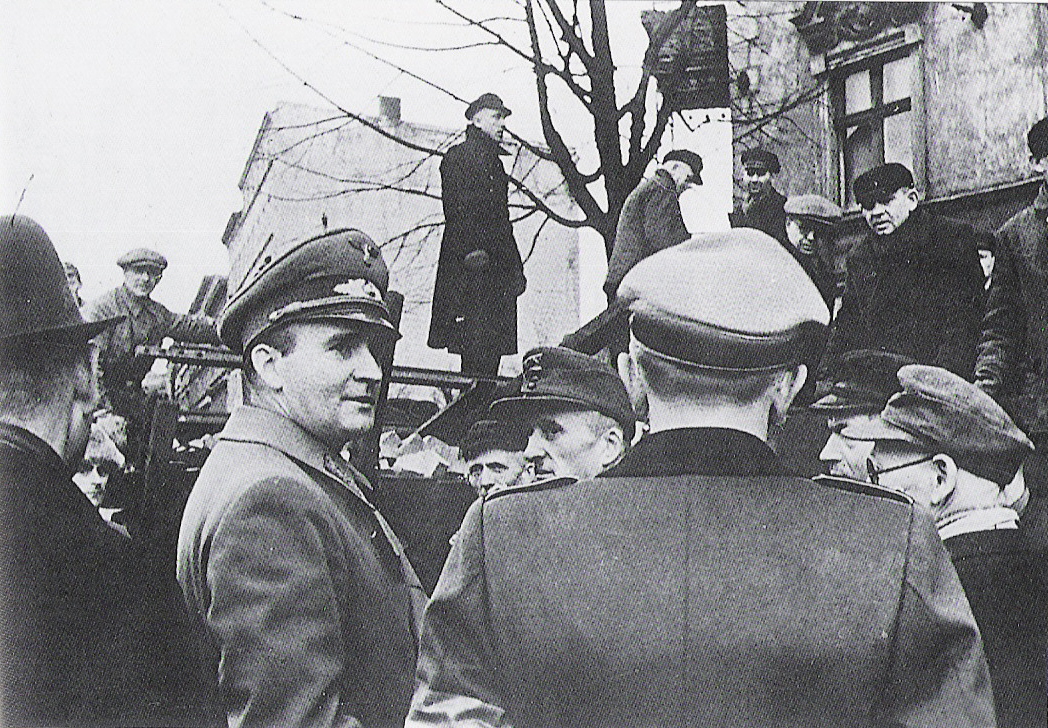 Gauleiter Karl Hanke and the besieged in the Festung Breslau 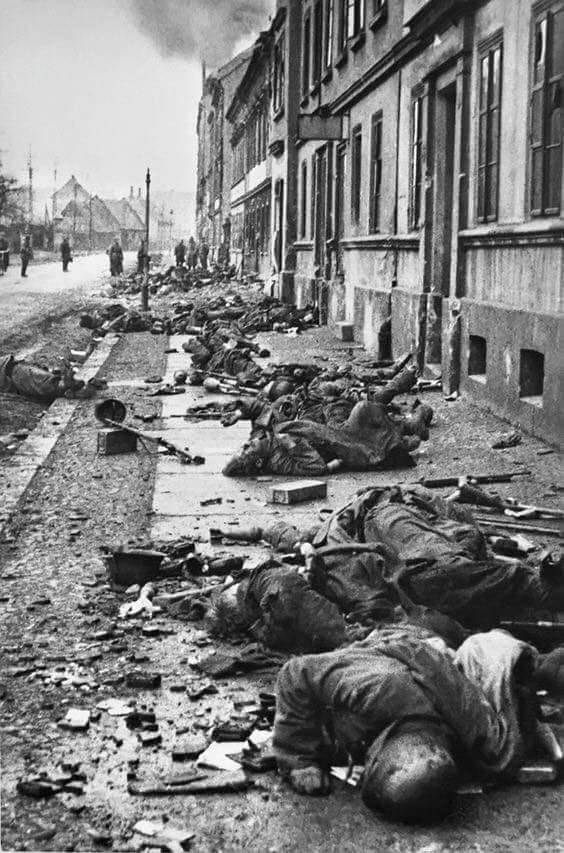 Dead German soldiers who fought heroically against the Red Army in the defence of Breslau, 1945 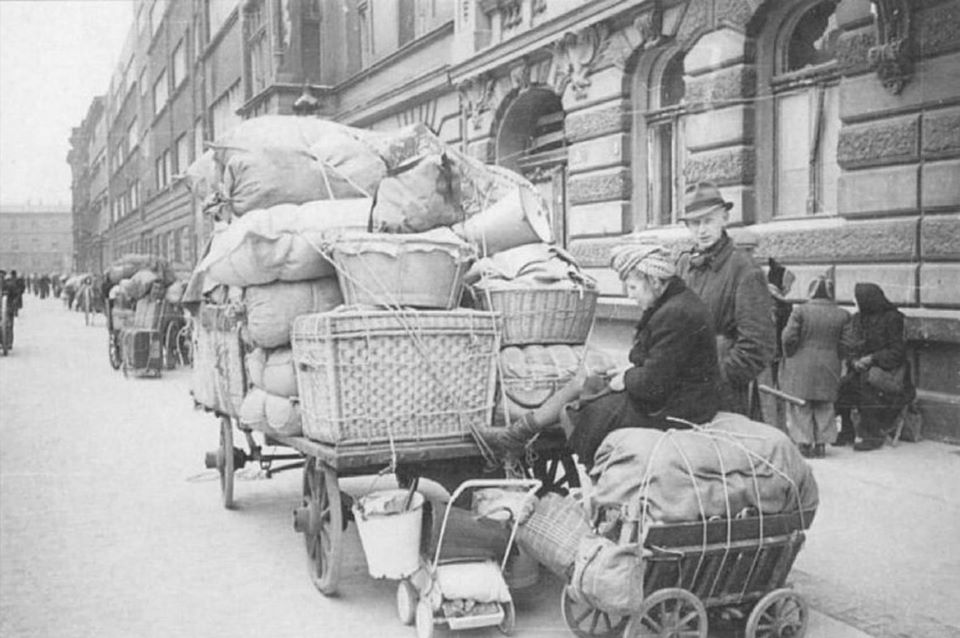 German citizens of Breslau await their expulsion (Vertreibung) by the Poles.

The latest style of Gothic architecture, and that of the earliest Renaissance, were zealously cultivated at Breslau, and many fine buildings were erected here. To the north of the cathedral was the little church of St.Aegidius, said to be the oldest edifice in Breslau, in the transition style. The wife of Count Peter Wlast founded the Church of Our Lady of the Sand in the 12th century (rebuilt 14-15th centuries). The brick Kreuz-Kirche on the right bank of the Oder was consecrated in 1290 and contains St. Batholomew's crypt; the tomb of Duke Henry IV of Silesia (d.1290) is in front of the high altar. At the end of Schweidnitzer (the famous theologian, a native of the city) Straße stood the Minorite Church of St.Dorothea (1351). The finest Gothic church is the elegant Church of St. Elizabeth (founded c1245; tower 1452-56; restored 1890-93). The Church of Mary Magdalen (Protestant), east of the Ring, dates from the same period and was built in the late Romanesque style.

St. Adalbert's Church (13-14th century) was in Albrecht Straße. The choir of the cathedral of St.John The Baptist dates from c1250, while some relics of the original building at the main entrance date from the previous century. It was extensively rebuilt in the 14th and 15th centuries and restored in 1873-75. It contains the tomb of the founder and several bishops, and a monument to Duke Christian of Holstein who fell in battle with the Turks at Salankemen in 1691. A chapel contains a monument (1727) of Count-Palatine Franz Ludwig, Elector of Mayence and Prince-Bishop of Breslau. The Church of St. Berhardin near the New Market dated from the 15th century. The handsomest secular building is the Rathaus (Town Hall) (built c1350; restored 1885-88). Here, as in all semi-Slavic countries, the Renaissance gained ground at a remarkable early period. The new style appears to have been applied to the portals and to monuments, but works of greater magnitude were unfortunately never attempted. To the Jesuit style the town is indebted for its imposing university. It had been a Jesuit college until 1811 when the university from Frankfurt-on-Oder was transferred to it. In 1904 its library had 330,000 books, 4000 volumes of manuscripts and 3200 incunabula.

The State House, west of the Rathaus, was completed in 1862 from Stuler's designs. Opposite the Silesian Museum of Industrial Art and Antquities, in the old Hall of the Estates, stood the New Stock Exchange, built in Gothic style by Ludecke (1864-67). The Gothic Church of St. Michael, a brick edifice by Langer, was consecrated in 1871. The Museum of Fine Arts, a brick building with an Ionic portico and lofty dome was erected in 1875-80 by the architect Rathey.

A bronze statue of von Moltke, by Uchtritz, was erected in 1899, and another, of Bismark (1900), by Breuer, was in the Konigsplatz. A monument, designed by Silesian Carl Gotthard Langhans (whose wife was a native of Breslau) with bronze additions by Johann Gottfried Schadow, was erected in memory of Friedrich Bogislav von Tauentzien,[3] the gallant defender of Breslau in 1760. (After 1945 the Polish occupiers of Breslau completely destroyed this monument.) In the New Market, an ancient fountain containing a figure of Neptune, was restored in 1874.

Archaeological findings indicate a settlement on the site as early as the Stone Age, several thousand years ago. The Goths and Celtic tribes anciently inhabited this region and Tacitus included it in Germania. At some point these tribes moved on or were exterminated by others or famines and disease. With the advancing westward migrations and settlements of the Slavs, the Poles arrived in the 10th century and erected a settlement here on the crossroads of the amber trade route between the Eastern Roman Empire and the Baltic Sea and the trade route linking the Black Sea to western Europe.

In 1000 AD the second Polish King, Boleslaw I 'the Brave' (r.992-1025), in whose reign the term Polonia first appears in concert with Sclavinia[4], built a fort here, and a Bishopric was established on what became known as cathedral island.

In 1109 a major attack by Holy Roman Empire forces was repelled outside the town. Duke Wladyslaw II 'the Exile' declared Breslau the capital of Silesia in 1138 and ruled until his expulsion in 1146. It became an independent Duchy in 1163. Much of the town south of the Oder was devastated during the Mongol invasion in 1241. In 1261 Duke Heinrich III introduced the municipal law of Magdeburg, a civic constitution based on German law, and successive Silesian administrations, notably in that century, encouraged German migration to Breslau and Silesia. Thereafter Breslau flourished as an economic centre. Nearby to the east a New Town was developed and it united with the old town in 1327.

Upon the extinction of the Dukes in 1335, Silesia (including Breslau) was annexed to Bohemia and became subject to the German Holy Roman Emperors of the German House of Luxemburg, who took the city under their special protection, so that, in spite of the storms of the Hussite wars and of the following centuries, a independent German element was strongly developed. Extensive rebuilding and new building now took place (as indicated above).

In 1523 the citizens embraced the Reformation, and in 1527 the province and city fell under the Austrian supremacy as Bohemia passed to the Habsburgs. In 1741 Frederick The Great of Prussia marched into Silesia and took it and Breslau by surprise. In 1757 the town was again occupied by the Austrians, but was recaptured by Frederick after the Battle of Leuthen the same year.

In 1760, Prussian General Friedrich Bogislav von Tauentzien (1710–1791) repelled an attack by the Imperial Army (Holy Roman Empire) under Baltic German-born Austrian Feldzeugmeister Ernst Gideon von Laudon during the Seven Years' War. In 1806-7 the town was besieged by Napoleonic forces under General Dominique Vandamme, who took it and largely leveled the fortifications. In March 1813 Breslau was the scene of an enthusiastic popular rising against the French, on which occasion King Frederick Wilhelm III issued his famous appeal "An mein Volk".

It was also a popular cultural and sports centre with a major opera house and stadium.

The hard-line revolutionary socialist and agitator, Ferdinand Lassalle, founder of the Social Democratic Party of Germany (SPD), was born here in 1825 where his father was a wealthy Jewish silk merchant. Lassalle was killed by an aristocrat in a duel, in 1864, and is buried in the Jewish Cemetery at Breslau.

At the end of The Great War it was argued by some of the Poles concerned with placing their national claims at the Paris Peace Conference that Silesia should be given to the newly reconstituted state of Poland. With the exception of the dismemberment of Upper Silesia by force by Poland, this did not happen. Polish Archbishop Stablewski had already written on these claims as far back as 9th October 1892:

Any attempt to identify Silesia with Poland’s pre-1772 status is entirely unjustified and fallacious. It implies no more nor less than an attempt at new booty…. ~ Roman Catholic Archbishop of Posen and Gnesen, Florian Stablewski, in the Kurjer Poznanski.

During World War II the German administration refortified the city, holding out under Karl Hanke, the Gauleiter of Lower Silesia, until virtually the very end of the war when the forces of the Soviet Union, who had already advanced hundreds of miles past Breslau, finally broke in. Most of the city's industry and some 70 % of its residential areas were either heavily damaged or entirely destroyed.

Joseph Goebbels stated in his diary:

Hanke received extraordinary praise from the Fuehrer at today's briefing. He deserves it too. He is the outstanding leader among our fighting Gau-leaderships. He also engaged in combat to an extent that unfortunately cannot be determined among the other Gauleiters.

At the end of WWII Breslau fell inside the Soviet Occupation Zone of Germany, but they announced at the Potsdam Conference that they were going to assign most of the territories in that zone east of the Oder to their new puppet Communist state of Poland, and the liberal plutocratic western powers admitted they were entirely unable to do anything about this.[5] The Soviets and the Communist Polish Militias proceeded to expel the German population en masse from both city and province in the most brutal, barbaric and murderous manner[6]. The Times (London) reported on 27th October 1945:

"The Polish authorities in Breslau today demolished one of the few remaining German monuments in the city, that of Kaiser Wilhelm I, and announced that the remaining 200,000 Germans still in Breslau would be expelled to Allied-controlled Germany. The new Polish city president, Stanislac Gosniej, declared in a speech before the monument, that 4,000 Germans were being expelled every week and within six months Wroclaw (Breslau) will be the second city of Poland [...] its population replaced by Polish settlers. It remains under Polish occupation."