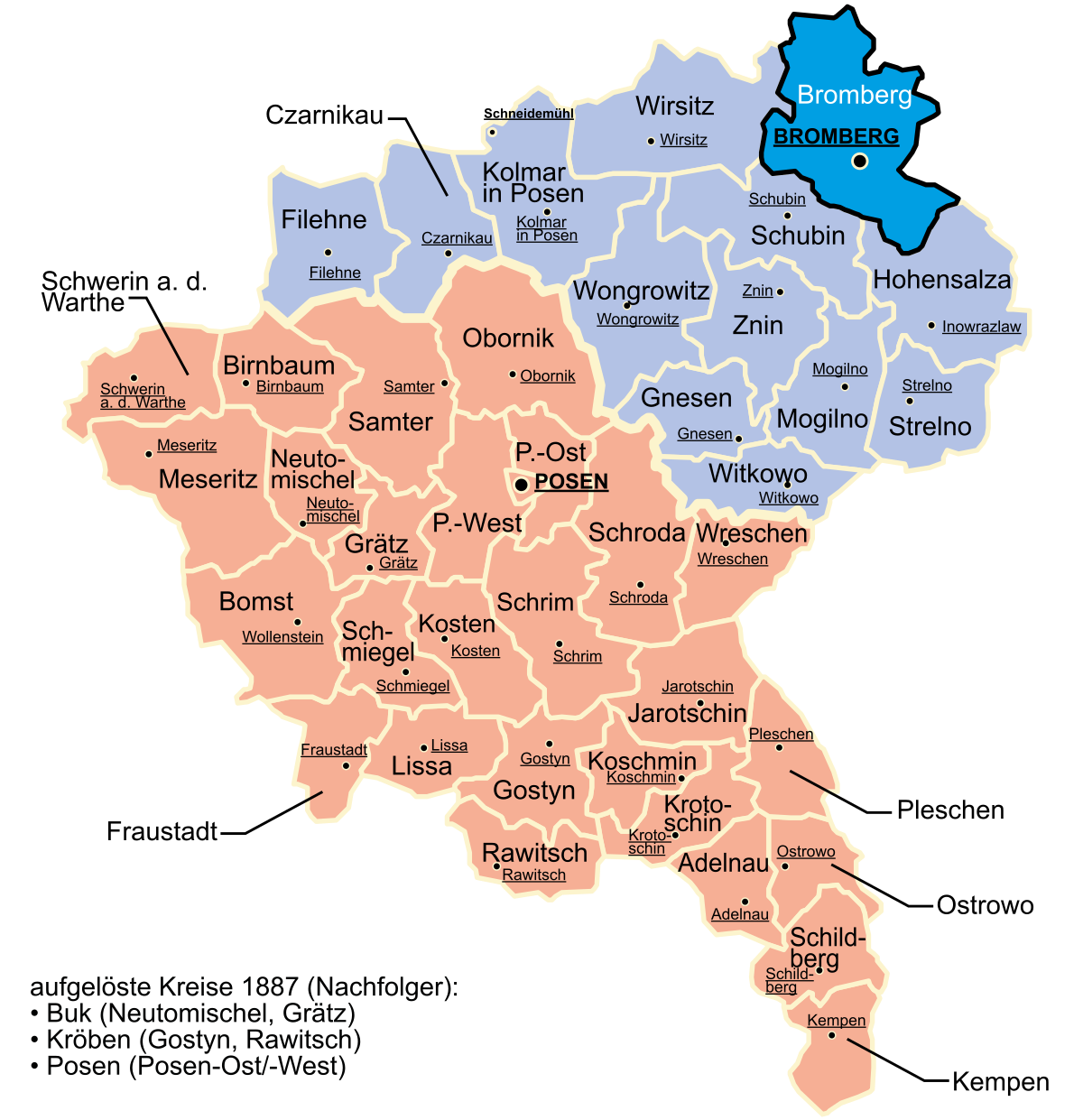 Administrative Divisions of the Prussian Province of Posen (1815-1920) 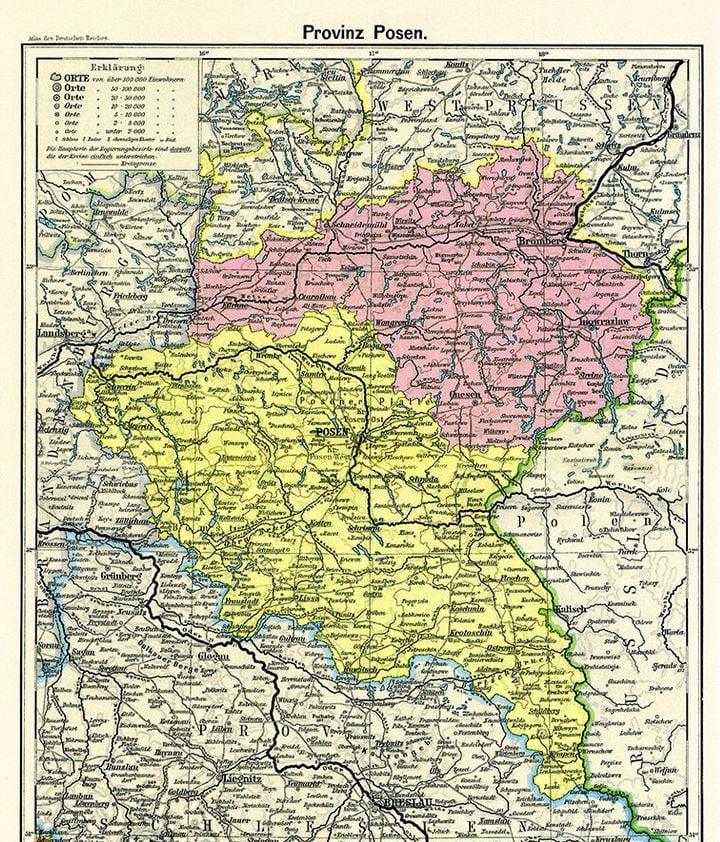 Posen (Polish: Poznan), along with Gnesen, is one of the most ancient Polish towns, on the bank of the river Warthe, and was originally part of so-called Great Poland. Following the Second Partition of Poland in 1793 it and the province of the same name were annexed by the Kingdom of Prussia and remained under German sovereignty until after June 1919 when the plutocratic Western Allies detached the province along with West Prussia and included it as part of the new resurrected Poland under the Treaty of Versailles, despite Poland not playing any sovereign role in WWI. During World War II it reverted to Germany and in May 1945 was returned to Poland.

Posen was the seat of a Bishop from the end of the 10th century and the residence of the Dukes/Kings of Poland down to 1296. The older part of the town, comprising the Alte Markt and the adjoining streets, owes its origins to the immigration, by invitation, of Germans in 1253, and it early achieved importance as a trading centre with the East; it was a member of the Hanseatic League in the Middle Ages. In 1900, the new town (Nuestadt) formed a striking contrast with the older and poorer quarters, having been erected since it became part of Prussia in 1793. Outwardly Posen was a well-built German town, and important market centre with substantial shops and commercial buildings. Under the Prussian Government they endowed Posen with magnificent educational institutions, including a university.[5] In the decade before The Great War the town still stood under the protection of imposing fortifications, with a garrison of 7000 men. In front of the State Theatre on the Wilhelm-Platz once stood a momument in memory of the soldiers who fell at the Battle of Nachod in 1866. In front of the Military Headquarters once stood a monument, a war memorial for the Franco-Prussian war of 1870-71, with a statue of Kaiser Wilhelm 1st by the sculptor Barwald.

At the corner of the Wilhelmstrasse was the Raczynski Library containing 30,000 volumes, many on Polish history. On the corner of the Neustrasse and the Wilhelmstrasse once stood the Emperor Frederick Museum, opened in 1903, which contained prehistoric, natural history, and historical collections, and galleries of paintings and sculptures, including the Raczynski collection of paintings which were previously in Berlin. This collection was rich in modern works, especially of the Berlin and Munich schools, but contained also a few valuable and old Spanish and other paintings. At the south end of the Wilhelmstrasse in the churchyard of St. Martin's, is a monument to the Polish national poet, Mickiewicz (d.1855) who is buried in Cracow. In the Ritterstrasse the Kaiser Wilhelm Library was opened in 1902. In Victoriastrasse was the Museum of Count Mielzynski with the collections of the Polish Society of Friends of the Wissenschaft, including prehistoric antiquities, paintings including portraits of eminent Poles, coins, and a library.[6]

In the Alte Markt to the east of the Wilhelm-Platz was the Rathaus (Town Hall), originally a Gothic edifice, but rebuilt 1550-52 in the Renaissance style following a fire in 1536 by the Italian architect G. B. di Quadro. The tower, restored in 1783, commanded an extensive view. In front of the Rathaus was a Pillory from 1534, and a fountain erected in 1766. Beyond the canal to the north-east was the spacious square containing the Cathedral and the Church of St.Mary, the latter a small Gothic building of the 15th century. The cathedral was rebuilt in 1775 but, says Baedeker, is "architecturally uninteresting", but contained several treasures of art, including: five pillars upon which were memorial Brasses of the 15th-16th centuries including one for the Vovoide, or Governor, Gorka, who died in 1475; the Golden Chapel, erected in 1842 by a society of Polish nobles, in the Byzantine style, adorned with paintings and mosaics; and fine gilded bronzes of the first two Christian Polish Kings, by the leading German sculptor Christian Daniel Rauch, are opposite their sarcophaguses.[7]

It was said that "in former German Poland the standard of prosperity of the Polish community was higher than in the other divisions. At the same time the population were more thrifty."[8]

Until 1919 Posen was served by the extensive Prussian State Railways system (subsequently 1939-45 the Deutsche Reichsbahn).

Following the Armistice of 11 Nov 1918 an Armistice Convention was established as the regulatory body until the Supreme Council of the Peace Conference had decided upon a Peace Treaty. In December 1918 the Polish politician Paderewski travelled through Posen province on his way to Warsaw, provoking patriotic demonstrations by the Polish-speaking inhabitants. This naturally led to reprisals by the Prussian garrison in Posen, the province still being under German sovereignty and jurisdiction. The Poles set up a so-called National Council of Posen with illegal groups of vigilante civilians in militia formations. Collisions followed between the German and Polish residents. The much reduced German garrisons in the province had some difficulty in maintain order against the Polish terrorists. At the end of January 1919 the Confernece proposed sending an Inter-Allied Commission with a view to calming the situation. The German Government reminded the Conference that until the Peace Treaty they could not enter German territory. This was ignored and the Commission travelled to Posen province where they managed to bring a halt to Polish provocations.[9]

Posen as well as the province of that name was awarded to the new Poland in the imposed Peace Treaty of June 1919. In the next decade the Poles carried out many civic improvements and extended the city boundaries. Unfortunately the Poles began an aggressive Polonisation programme and the systematic oppression of the German population (despite German still being the language of commerce), notably in education; German properties were often compulsorily liquidated, "a favourite device"! Large owners of land and factories who were settled here prior to 1908 had the option to acquire Polish citizenship and some did. However a strict interpretation of the article concerning this in the Versailles Treaty was responsible for the expulsion by Poland of thousands of Germans. In the case of German companies they were obliged to accept Polish directors, despite their lack of, or absence of, knowledge. Polish officials became domineering in most things but especially taxation. Despite many families having been in Posen for up to 700 years and led blameless existences, the great exodus of Germans began, despite petitions to the League of Nations which Poland either opposed or ignored.[10][11] Even the Roman Catholic Church took part in these expulsions, with Polish Bishops ousting German priests (who were usually bilingual) and replacing them with ardently Polish new clergy who follow the nationalist policies and only spoke Polish.[12]