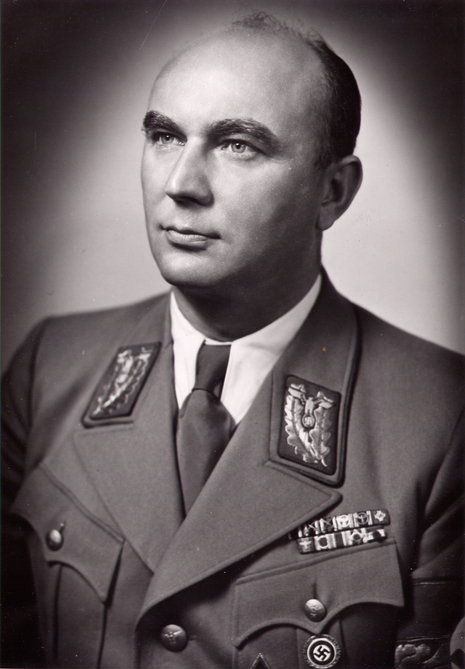 Arthur Karl Greiser (b. 22 January, 1897 in Schroda, Posen province - d. 14 July 1946 in Posen) was a German officer in the Imperial German Navy and the Freikorps, as well as a National Socialist politician, Landesjägermeister of Danzig, officer of the SS (SS-Obergruppenführer) and of the Kriegsmarine (Kapitänleutnant der Reserve), as well as Gauleiter and Reichsstatthalter (State Governor) of the Reichsgau Wartheland (de) in World War II, an area which included part of West Prussia[1] and part of the province of Posen. 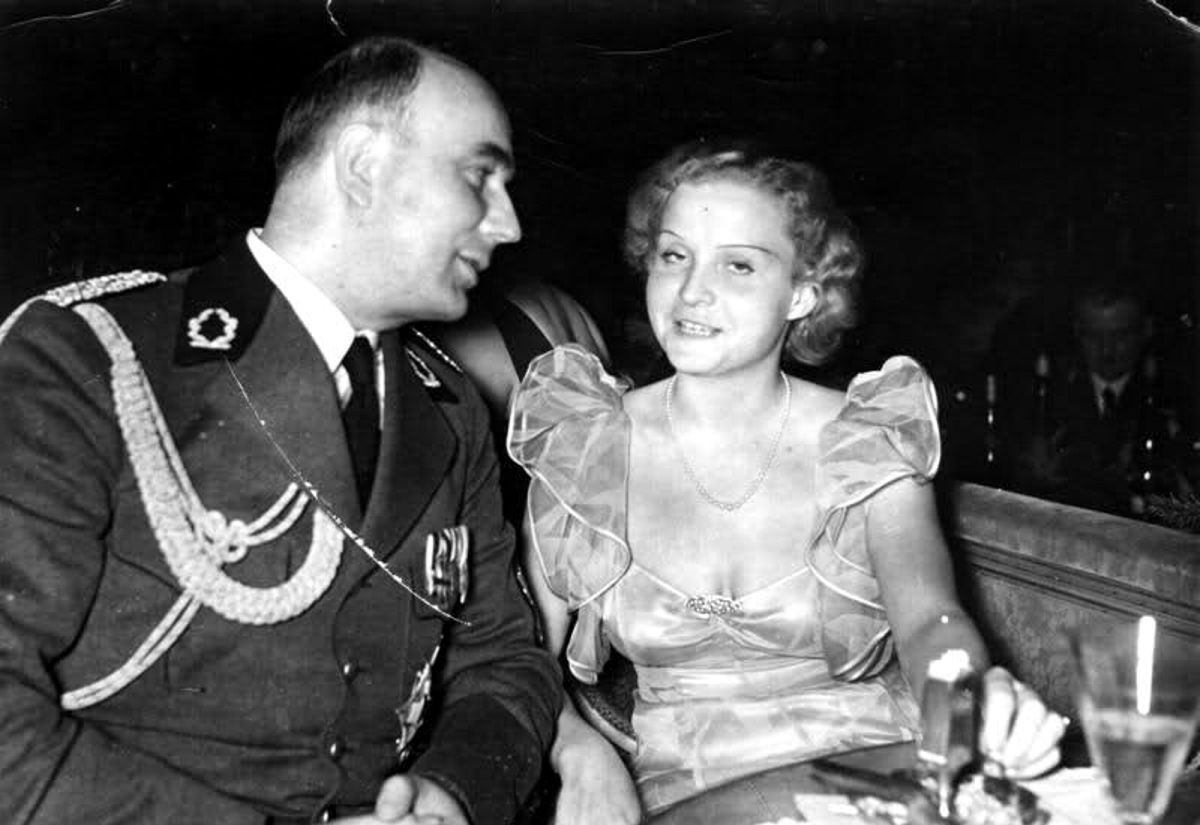 Senate President Arthur Greiser in the uniform of a state hunting master (Landesjägermeister) on 5 November 1937 with his second wife Maria Theodora, née Körfer, on the occasion of the ball of the German Reich Hunting Association (Reichsbund Deutsche Jägerschaft) in the zoo. 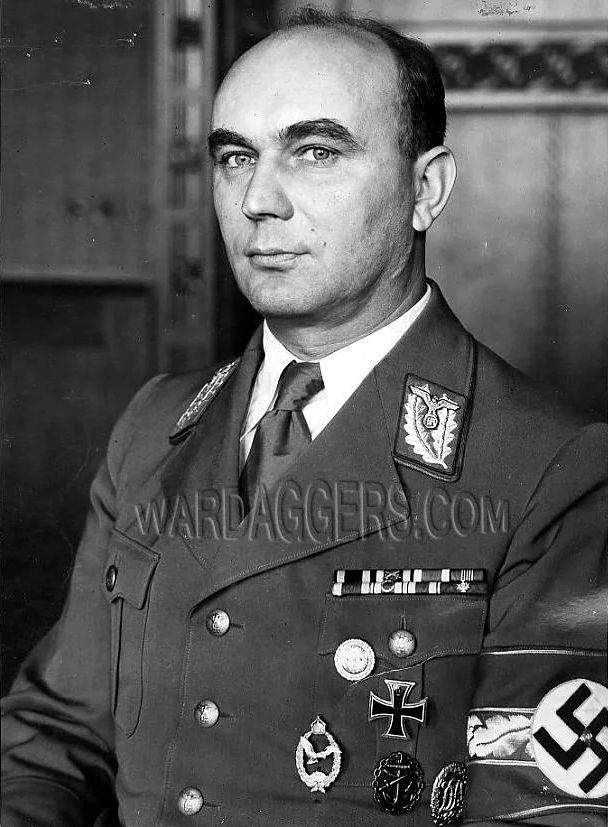 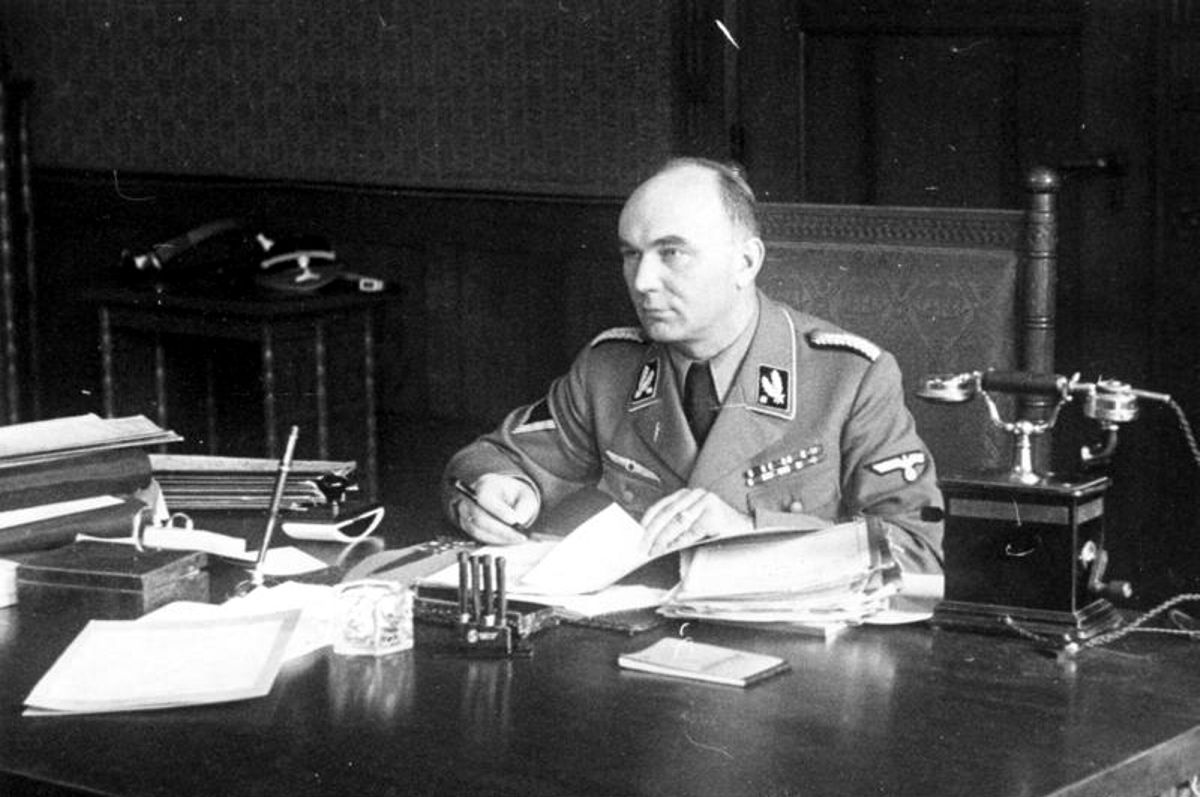 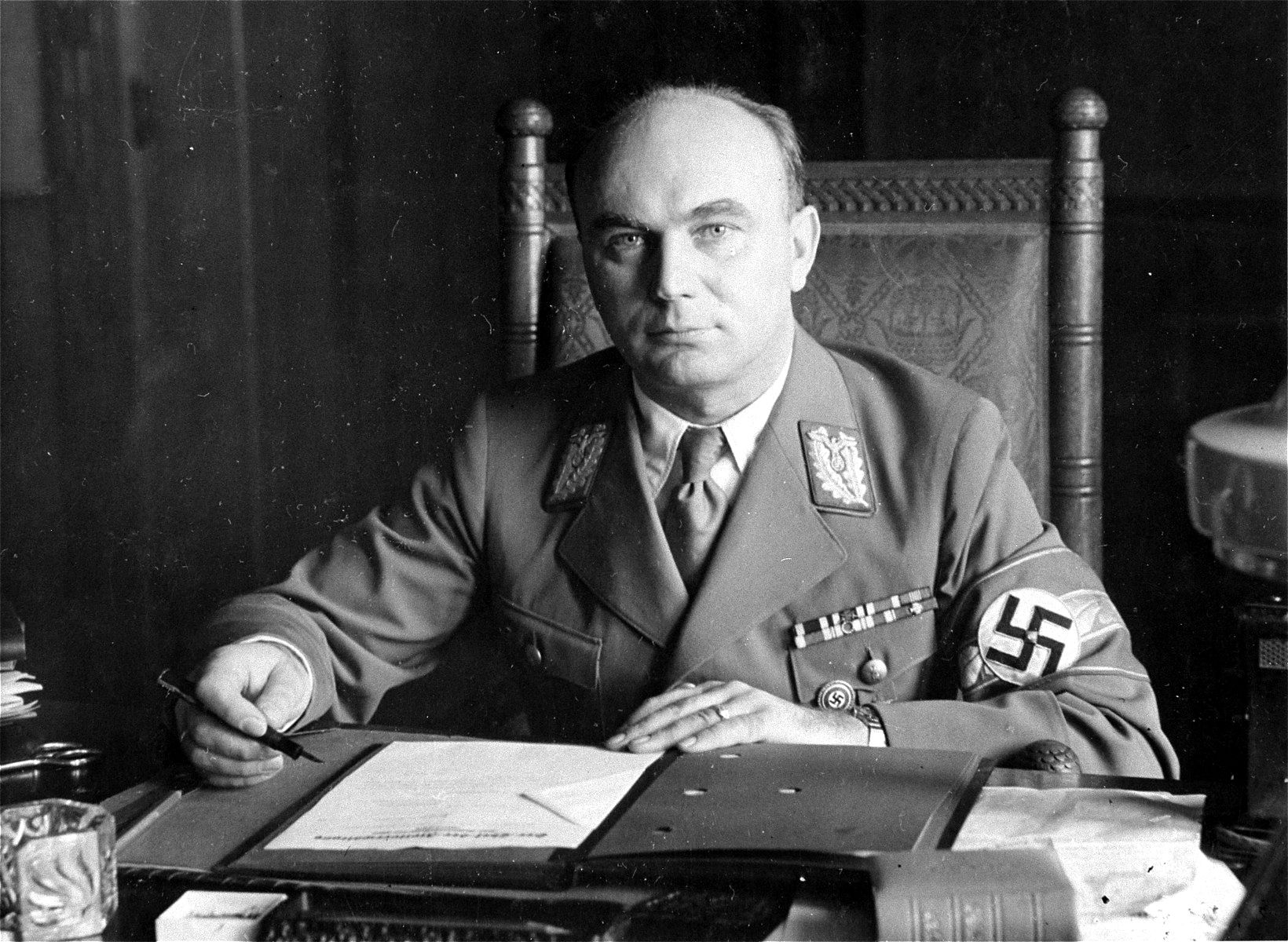 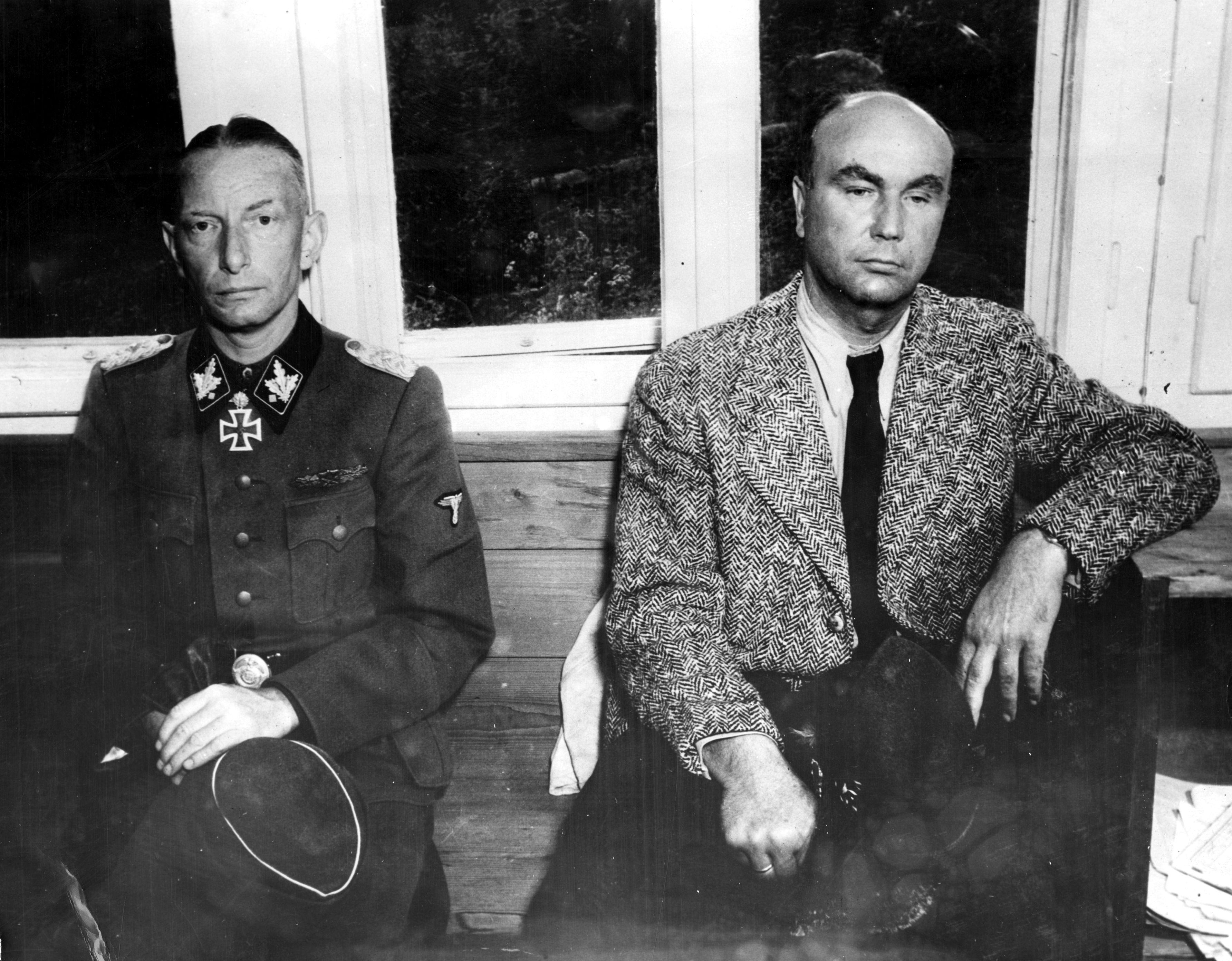 SS-Gruppenführer und Generalleutnant der Waffen-SS und Polizei Heinz Reinefarth and Arthur Greiser, captured by the US-Americans in the Alpenfestung in May 1945 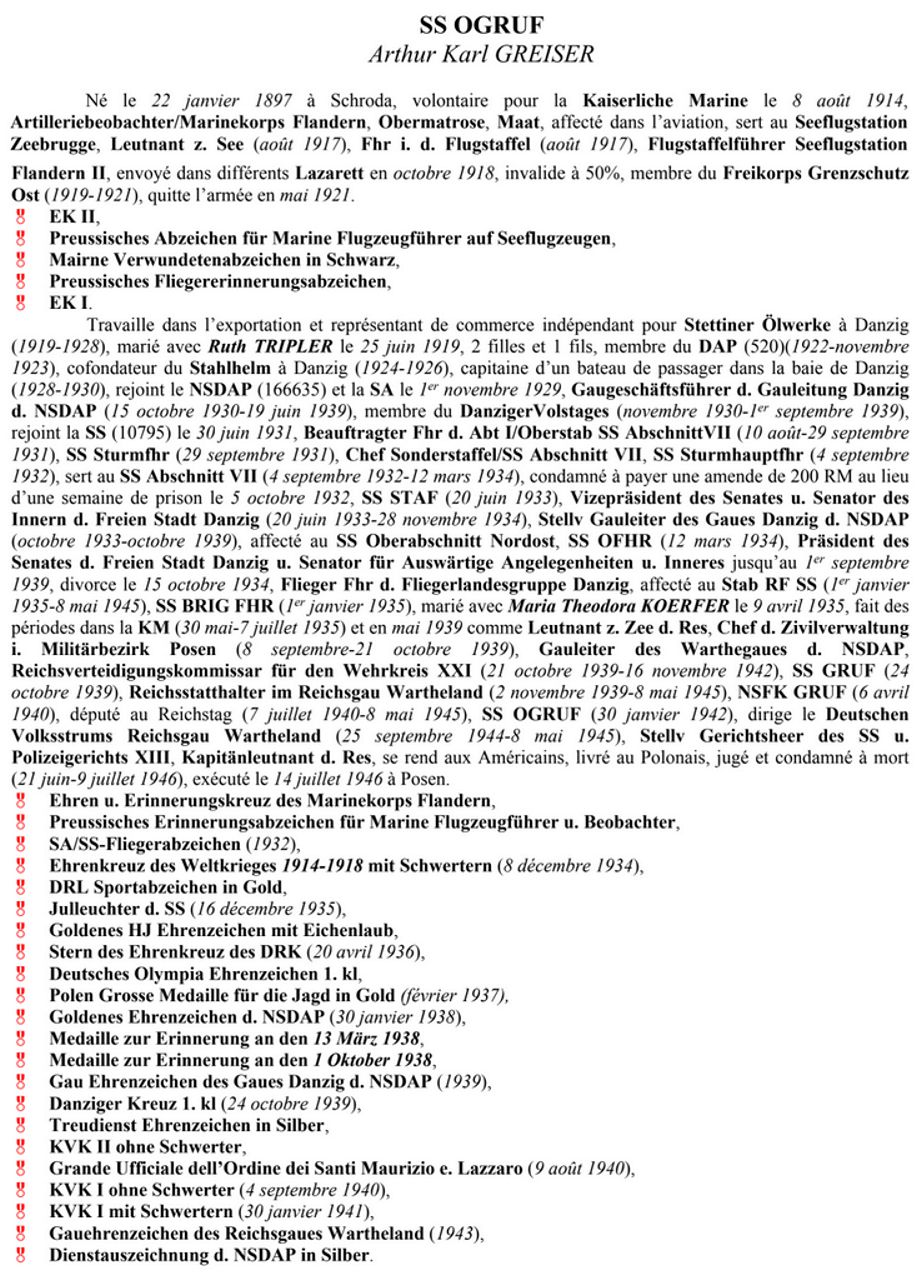 Grieser was born in Schroda, Posen province, Prussia, and grew up fluent in both German and Polish. He attended the Königlich-Humanistisches Gymnasium (Royal Humanistic Secondary School) in Hohensalza, Bromberg district, which he left aged 17 when he volunteered for the Kaiserliche Marine on 4 August 1914, at the beginning of the First World War. From August to October 1917, in the meantime Leutnant der Reserve der Matrosen-Artillerie (since August 1917 with patent from 1916), was, at first only Beobachter or flying observer, he served with the I. Marine-Küstenschutz-Staffel (I. Marine-Schusta), in November 1917 he became it's commander.

In October 1917 he was assigned to a naval station in Ostend, Belgium. From January and August 1918, he became a combat flyer at the Kampfeinsitzer-Schule Danzig-Langfuhr. In October 1918, the navy flyer (Marineflieger) was shot down and gravely wounded. Released in December 1918, his recovery dragged on until the spring of 1919, with the pilot suffering from 50 percent of the war damage.

From 1919 to May 1921, he served in the Freikorps (Grenzschutz Ost) and fought in the Baltic states (Baltikumkämpfer).

In 1924 he was able to afford a holiday in Italy with his wife. Shortly afterwards he opened a branch of his sales agency (oils and fats) in Hamburg. Greiser was an active member of the Sopot Tennis Club, also served on the board (in 1934 he was therefore made an honorary member). The merchant Greiser, a member of the Stahlhelmbund until 1926, was also a member of a Freemasonry. In 1929, as a result of the Depression, he lost his company and worked for a short time at Adolf Mazur’s “Oil and Fat Factory AG” („Öl- und Fettfabrik AG“ ). He was also captain of a motor boat for passenger trips in the Danzig Bay in the summers from 1928 until 1930, in winter he towed ships.

He was leader of the aviator national group in Danzig (Flieger-Führer der Fliegerlandesgruppe Danzig). On 6 April 1940, he was awarded of the rank of NSFK-Gruppenführer. He also remained loyal to the German navy. As Leutnant zur See der Reserve, he took part in reserve exercises of the Kriegsmarine in 1937 and 1939, becomimg Oberleutnant zur See d. R. and finally Kapitänleutnant d. R.[2]

In 1941, Greiser became initiator of the renowned Clausewitz-Preis.

Greiser is alleged to have written, or otherwise have been associated with, certain documents which are sometimes cited as evidence for the politically-correct view on the Holocaust and other alleged atrocities. One example, involving correspondence with Himmler and others, is the alleged proposed killing of incurably sick Poles with tuberculosis. Revisionists argue that this involves a misinterpretation of the word "Sonderbehandlung" ("special treatment") and that in the post-war period a chief medical officer stated that

"A central office for the fight against tuberculosis was established under the management of a specialist. This office gave the same treatment to German and to Polish cases. During my period in office as chief medical officer in Posen, until January 1945, no tuberculosis patients were 'liquidated' in the Wartheland as far as I know. I never received an order for such a measure, much less brought one about either directly or indirectly. On the contrary, the office always tried to give all tuberculosis patients proper treatment."[3]

A related "Sonderbehandlung" claim is that Greiser, on 1 May 1942, supposedly asked Himmler for permission to "kill" 100,000 Jews. Revisionists argue that an examination of all available archival material this word is not used and in fact this refers to deportation; and that if the politically-correct view on the Holocaust is correct, then there would have been no need to ask for permission, since supposedly there was a general extermination order to kill all Jews.[3] Moreover, in 1942 there were not 100,000 Jews under Greiser's judisdiction.

Greiser was exposed to a show trial, convicted, and executed by hanging (gehenkt) in communist-controlled Poland in 1946.[4]

Arthur was the son of the bailiff (Gerichtsvollzieher) August Gustav Friedrich Greiser (later director of the Genossenschaftsverbände in Hohensalza) and his wife Ida, née Siegmund.

On 25 June 1919, Greiser married his fiancée Ruth Tripler (b. 1899), a pastor's daughter, whom he had met in August 1917 while on leave from the front with relatives in Sopot. The marriage produced a two sons and two daughters. The divorce took place before the regional court (Landesgericht) in Danzig on 15 October 1934. The children were:

On 9 April 1935, SS Brigadefuhrer Greiser married the concert pianist Maria Theodora "Tulli" Koerfer (b. 30 March 1908 in Cologne). She was the daughter of Johann Kaspar Körfer from Mönchen-Gladbach and his wife Emilie. Tulli was a member of the NSDAP. A son was born on 20 December 1939 from the marriage.