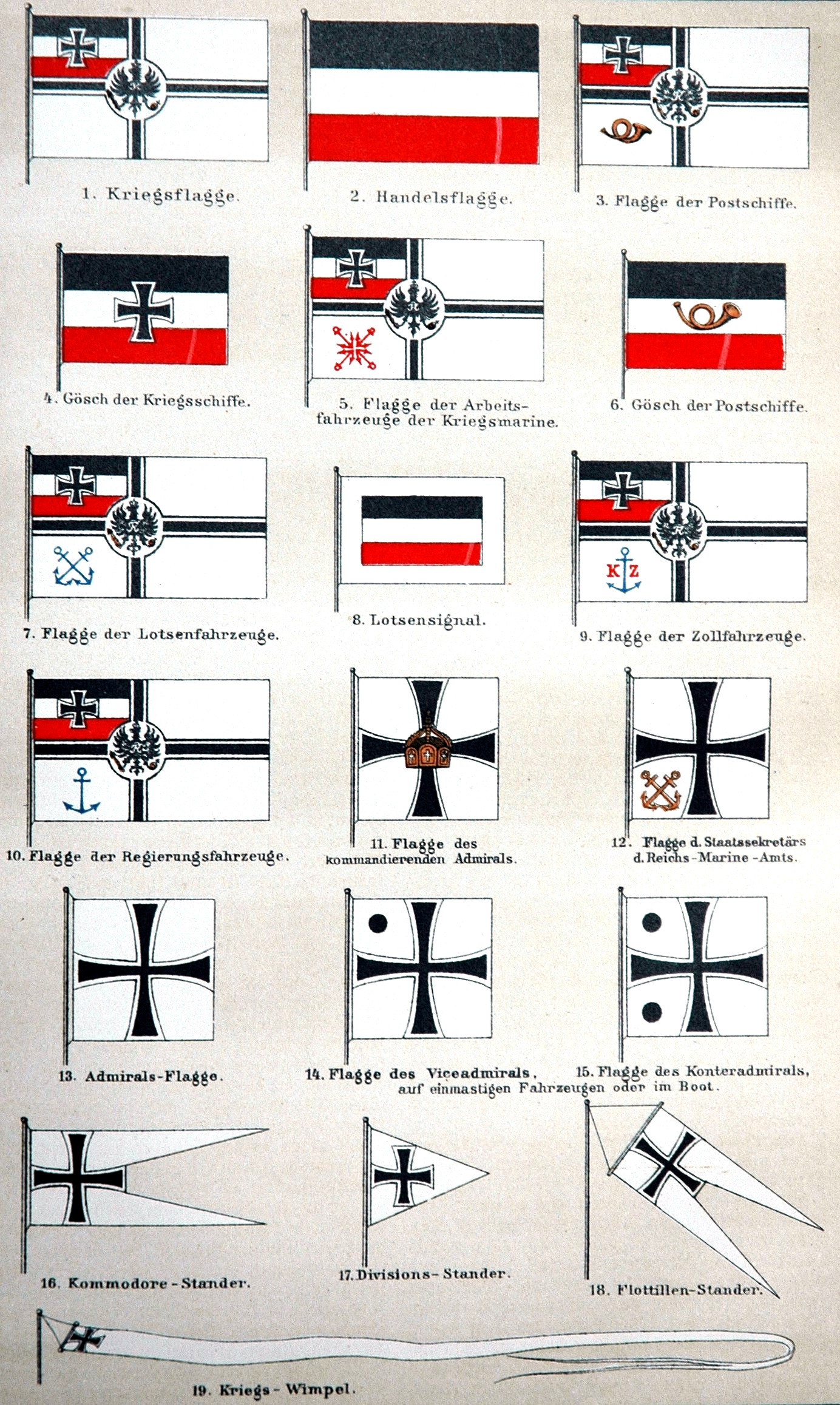 Flags of the Imperial Navy (with Iron Cross)

The Imperial German Navy (German: Kaiserliche Marine, sometimes Kaiserliche Kriegsmarine) was the navy of the German Empire from 1872 until 1918. The German Navy also had U-boats (U-Boote), an air force (Marineflieger), an infantry or marines (Marineinfanterie of the Seebataillone) and rigid airships (Zeppeline). 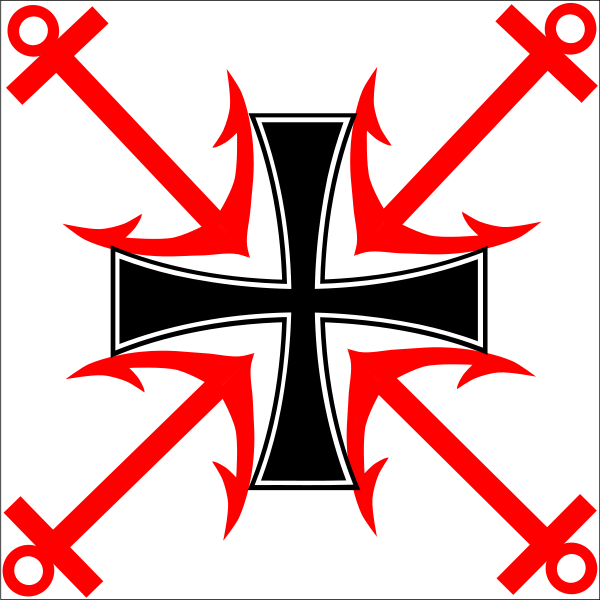 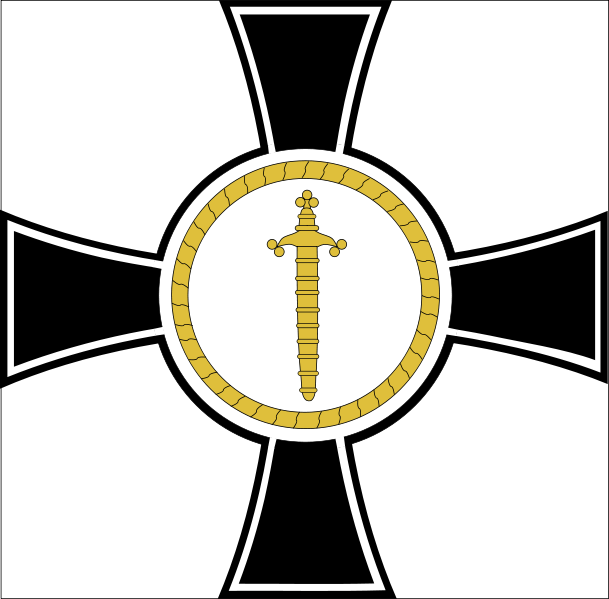 Standard of the Chief of the Admiralty Staff 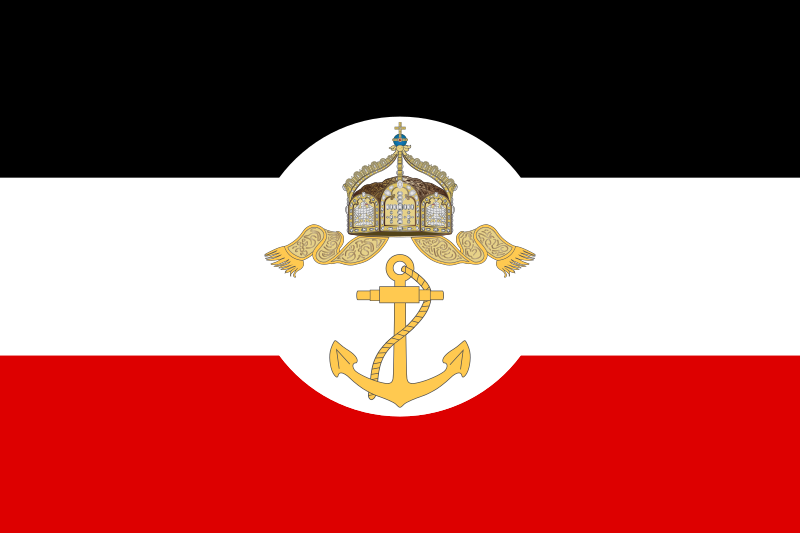 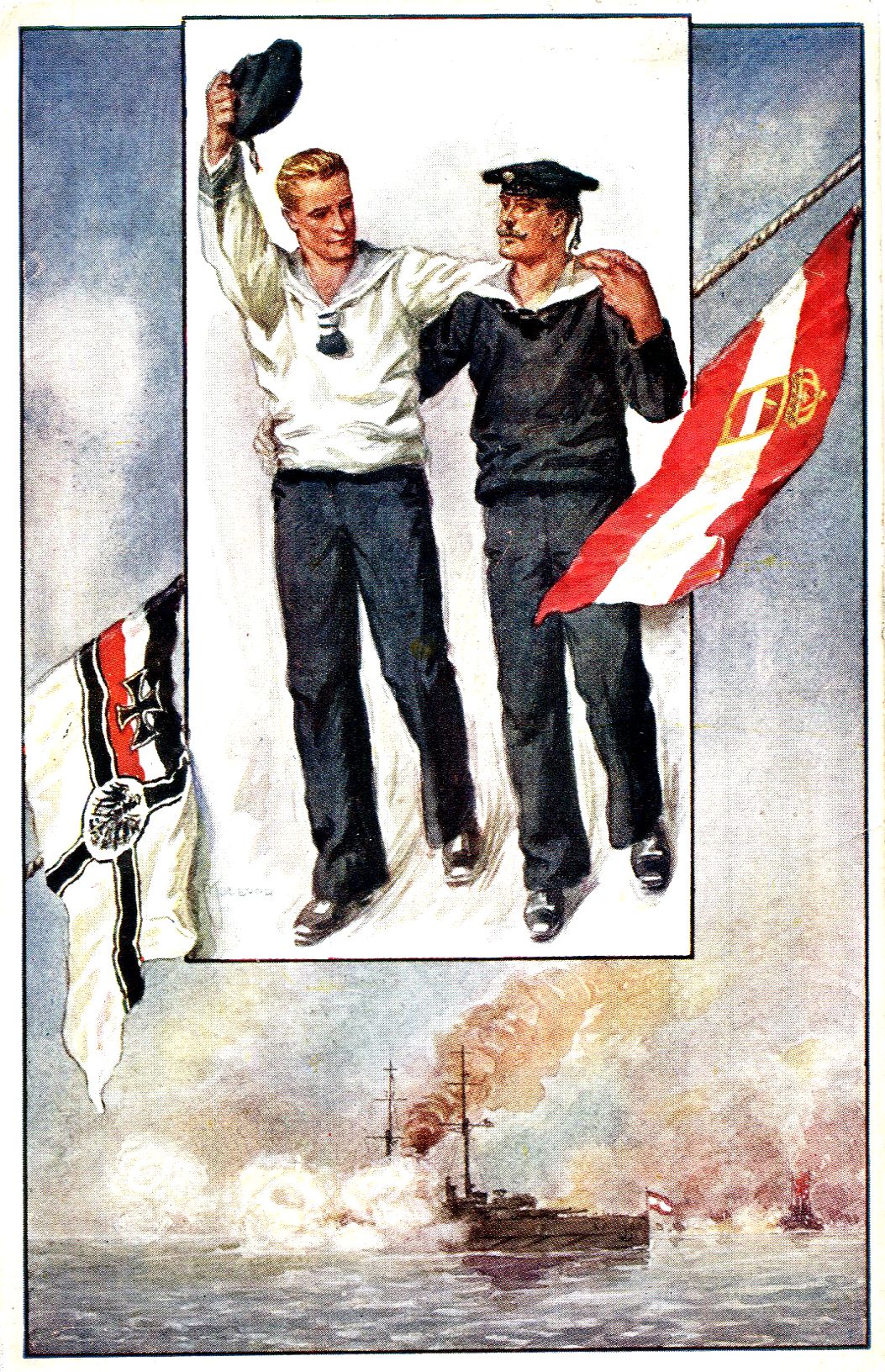 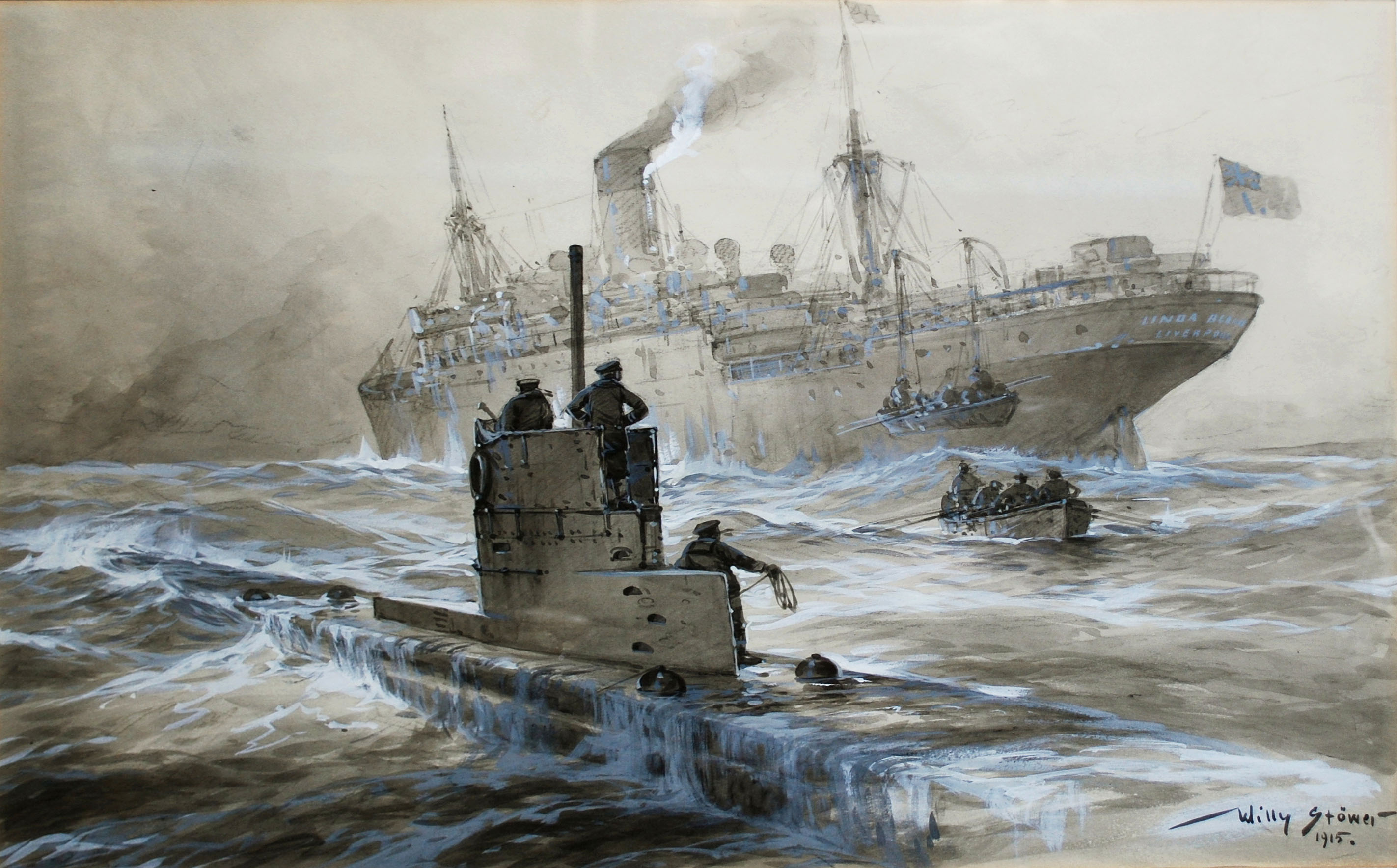 Sinking of the Linda Blanche out of Liverpool by naval artist Willy Stöwer (1864–1931); On 30 January 1915, "Linda Blanche", on a voyage from Manchester to Belfast with general cargo, was sunk by the German Unterseeboot SM U 21 (Kommandant Otto Hersing), 18 miles NW1/2 north of the Liverpool Bar lightvessel. There were no casualties. The crew of the cargo steamer, who landed at Fleetwood after the sinking of their vessel, declared that they had been well treated by the Germans who had given them cigars and cigarettes. One of the officers told them he was sorry to have to inconvenience them, but he had orders to sink all British craft. They left Manchester at four o'clock on Friday afternoon, and anchored for some time in the Mersey. At eight o'clock on Saturday evening the voyage was resumed , and at 12.30, when the vessel was due west of Liverpool Lightship, the German submarine U21 came alongside suddenly. The German officer, who spoke perfect English, instructed the skipper, Captain Ellis, to take the crew off within ten minutes. The two small boats of the vessel were quickly lowered and the crew got into them. The German sailors then fixed mine on the bridge of the vessel and one in the forecastle, and these exploded. The vessel was a complete wreck in five minutes. The Germans told the crew there was a trawler in a certain direction, and at two o'clock in the afternoon they were picked up by it. The interviewed man told an interesting incident in connection with the skipper's fox terrier. In their haste to get into the boat the animal was overlooked, and when the crew had cleared off, the dog jumped into the sea and swam to the small boats. When Ellis was interviewed the dog was in his arms.[1]

The German Imperial Admiralty (German: Kaiserliche Admiralität) was an imperial naval authority in the German Empire. By order of Kaiser Wilhelm I the Northern German Federal Navy Department of the North German Confederation (1866–71), which had been formed from the Prussian Navy Department (Marineministerium), became on 1 January 1872 the German Imperial Admiralty (Kaiserliche Admiralität).

The head of the Admiralty (Chef der Admiralität) administered the Imperial Navy under the authority of the Reichskanzler and the supreme command of the Emperor (Kaiserliche Kommandogewalt). It lasted until 1889, undergoing several reorganizations, but proved an impractical arrangement given the constant growth and the expansion of the German Navy.

The German Imperial Admiralty Staff (German: Admiralstab) was one of four command agencies for the administration of the Imperial German Navy from 1899 to 1918. While the German Kaiser Wilhelm II as commander-in-chief exercised supreme operational command and control of the naval forces, the military staff was split into the Admiralty, the Naval Office, the Naval Cabinet, and the Inspector-General.

Minor engagements included the commerce raiding carried out by the SMS "Emden", SMS "Königsberg" and the sailing ship and commerce raider SMS "Seeadler".

After the end of World War I, the bulk of the navy's modern ships (74 in all) were interned at Scapa Flow (November 1918), where the entire fleet (with a few exceptions) was scuttled by its crews on 21 June 1919 on orders from its commander, Rear Admiral Ludwig von Reuter. The surviving ships of the Imperial Navy became the basis for the Reichsmarine of the German Reich. 1935 the Kriegsmarine would become it's successor.