Erich Johann Albert Raeder (b. 24 April 1876 in Wandsbek, Provinz Schleswig-Holstein; d. 6 November 1960 in Kiel) was a German officer of the Kaiserliche Marine, the Reichsmarine and the Kriegsmarine, at last Großadmiral and recipient of the Knight's Cross of the Iron Cross in WW II. 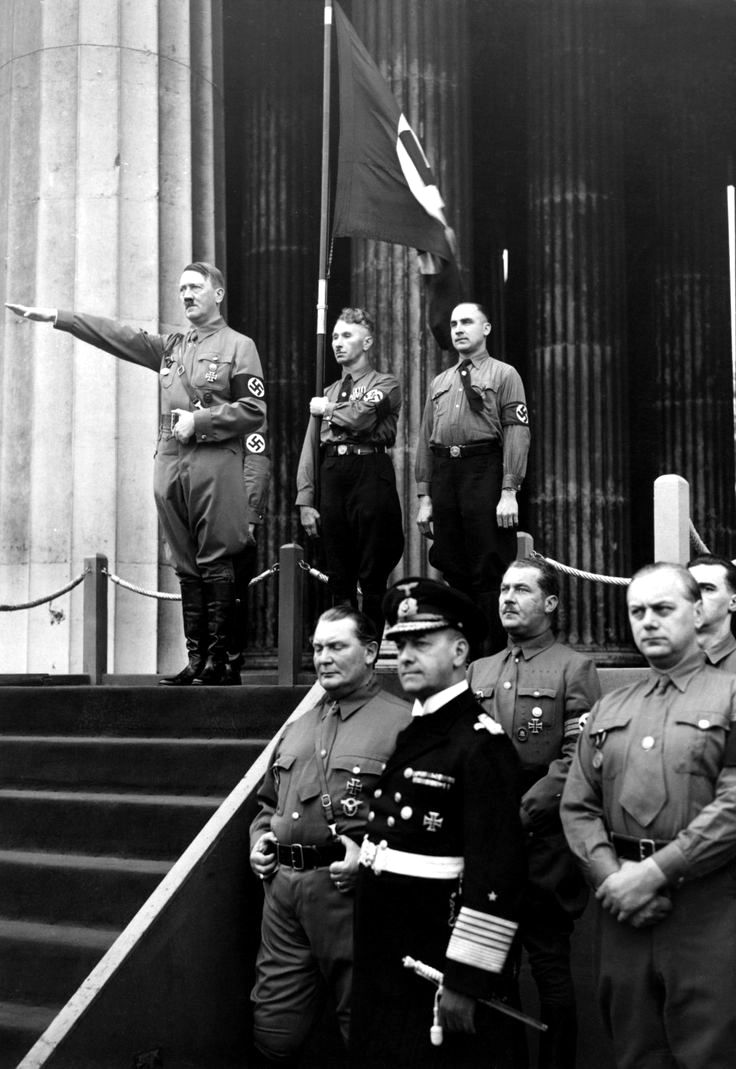 The Führer commemorates the fallen of the Munich Putsch at the Ehrentempel, behind him Jakob Grimminger with the Blutfahne, to the right Hermann Göring, Raeder and Alfred Rosenberg among others. 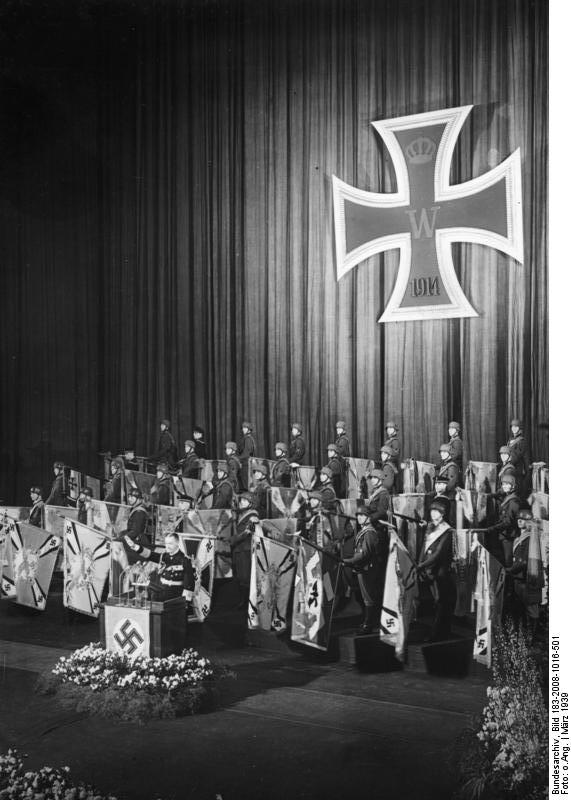 Generaladmiral Erich Raeder offers a National Socialist salute in Berlin during the memorial of the Heldengedenktag ("Day of Commemoration of Heroes") on 12 March 1939. 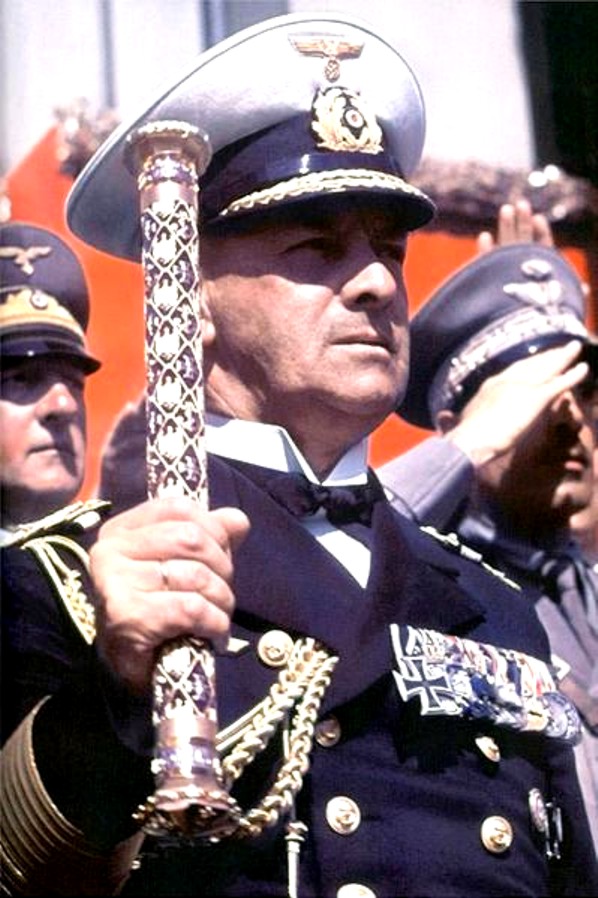 Großadmiral Dr. phil. h. c. Erich Raeder during the celebrations of the birthday of The Führer (Führergeburtstag[1]) on 20 April 1939 in Berlin 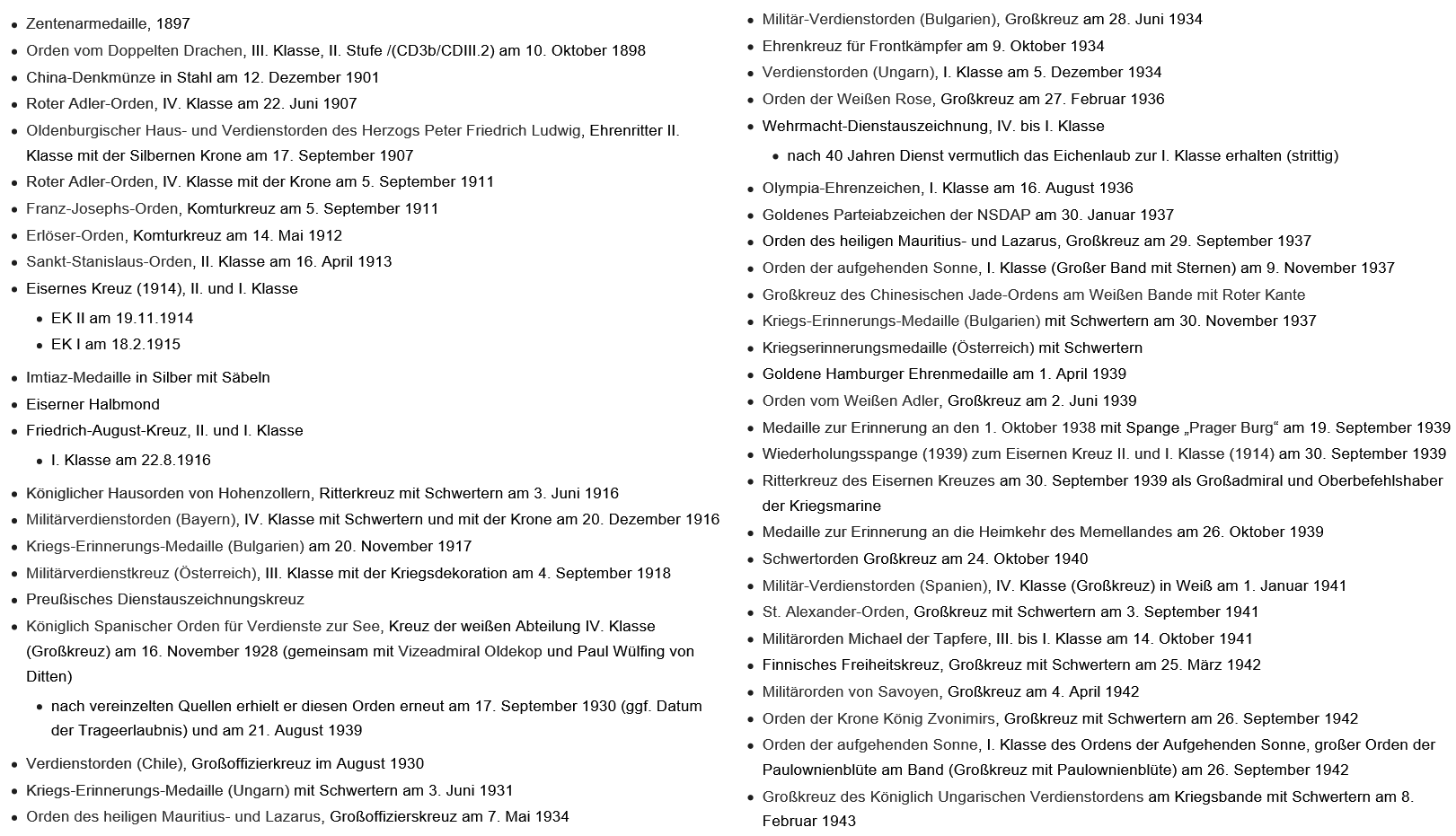 All known awards and decorations (in German)

Raeder was born into a middle-class family in Wandsbek in the Prussian province of Schleswig-Holstein in the German Empire. His father was a headmaster. He was the captain of Kaiser Wilhem II's private yacht in the years leading up to World War I. He joined the Kaiserliche Marine (Imperial Navy) in 1894 and rapidly rose in rank, becoming Chief of Staff for Franz von Hipper (de) in 1912. He served in this position during World War I as well as in combat posts, taking part in the Battle of Dogger Bank in 1915 and the Battle of Jutland in 1916. After the war, in 1920, Raeder was involved in the failed Kapp Putsch, and after its suppression he was marginalized in the Navy, being transferred to the Naval Archives, where for two years he studied naval history. Raeder also was the author of a number of studies about naval warfare, something that resulted in his being awarded a Doctor of Philosophy decree honoris causa by the University of Kiel on 31 May 1926.[2]

After this, Raeder continued to rise steadily in the navy hierarchy, becoming a Konteradmiral (Rear Admiral) in 1922 and a Vizeadmiral (Vice Admiral) in 1925. In October 1928, Raeder was promoted to Admiral and made Commander-in-Chief of the Reichsmarine, the German Navy of the Weimar Republic (Oberbefehlshaber der Reichsmarine).

Although he generally disliked the National Socialist Party, he strongly supported Adolf Hitler′s attempt to rebuild the Kriegsmarine, while apparently disagreeing strongly on most other matters. On 20 April 1936, just a few days before Raeder's 60th birthday, Hitler promoted him to Generaladmiral (General Admiral). In his quest to rebuild the German Navy, Raeder faced constant challenges from Hermann Göring′s ongoing quest to build up the Luftwaffe.

He was promoted to Großadmiral (Grand Admiral; equivalent to Generalfeldmarschall of the army land forces) in 1939, becoming the first to hold that rank since Alfred von Tirpitz. Later that year, he suggested invading Norway in order to secure sheltered docks out of reach of the Royal Air Force, as well as provide direct exits into the North Sea, but was strongly opposed by the German Naval Staff and "[A]t the end, Raeder agreed that the 'best' solution was preservation of the status quo."[4]

Norway was vital to Germany as a transport route for iron ore from Sweden, a supply that Britain was determined to stop. One adopted British plan was to go through Norway and occupy cities in Sweden.[6][8] An Allied invasion was ordered on 12 March, and the Germans intercepted radio traffic setting March 14 as deadline for the preparation.[10] Peace in Finland interrupted the Allied plans, but Hitler became, rightly, convinced that the Allies would try again, and ordered operation Weseruebung. The new Allied plans were Wilfred and Plan R 4. The plan was to provoke a German reaction by laying mines in Norwegian waters, and once Germany showed signs of taking action UK troops would occupy Narvik, Trondheim and Bergen and launch a raid on Stavanger to destroy Sola airfield. However "the mines were not laid until the morning of 8 April, by which time the German ships were advancing up the Norwegian coast."[11]

Raeder argued strongly against Operation Sea Lion, the planned German invasion of Great Britain. He felt that the war at sea could be conducted far more successfully via an indirect strategic approach, by increasing the numbers of U-boats and small surface vessels in service. He also had doubts about Germany's ability to gain air superiority over the English Channel and the lack of regional German naval superiority. Air supremacy was a prerequisite to successfully preventing destruction of the German invasion fleet by the Royal Navy. Instead, Raeder favored a strategic focus on the Mediterranean theater including a strong German presence in North Africa, plus an invasion of Malta and the Middle East. He believed that capturing Gibraltar, the Canary Islands and the Suez Canal would knock the United Kingdom out of the war. For instance, Raeder once told Hitler that a major offensive against Egypt and the Suez gave Germany a chance to strike a blow that "would be more deadly to the British Empire than the capture of London!" On several occasions, he suggested that Hitler send the vaunted tank commander Erwin Rommel to Egypt. Hitler finally relented in 1941, and then only to relieve the Italians.[12]

The invasion was postponed indefinitely due to the Luftwaffe′s failure to obtain air superiority during the Battle of Britain, and the significantly greater power of the Royal Navy over the German Naval forces. Instead, the German war machine was diverted to Operation Barbarossa, the German invasion of the Soviet Union, which he vigorously opposed. Raeder thought Hitler was so fixated on wiping out the Soviet regime that he didn't realize that a larger, global strategy could have easily tipped the balance in Germany's favor.[12]

Raeder told Hitler on 14 January 1943 that he could not preside over the proposal to scrap the capital ships, and informed the Führer of his wish to resign as of 30 January 1943 rather than carry out a policy that he did not believe in. Dönitz succeeded him in the post of Commander-in-Chief of the Navy on 30 January 1943, despite Raeder's recommendation that his deputy Admiral Rolf Carls succeed him. Raeder was reduced to Admiral-Inspector, but then formally resigned from the Kriegsmarine in May 1943, aged 67. Dönitz subsequently talked Hitler out of the plan to scrap the capital ships after taking over, arguing successfully to Hitler that a fleet-in-being in Norway tied down British warships which could be used in the Battle of the Atlantic or against Japan.

Raeder was suspected of involvement in the 20 July plot, but immediately cleared himself by going to Rastenburg to personally assure Hitler of his loyalty. 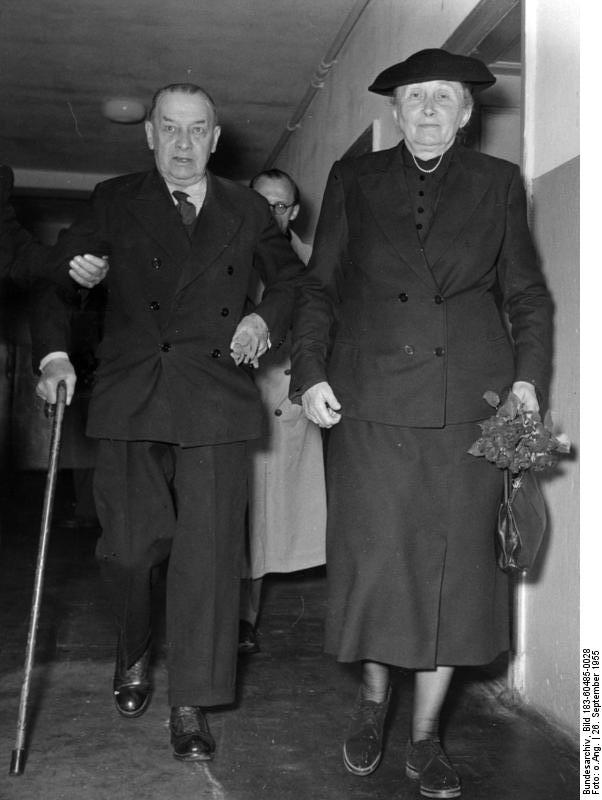 After the war, Raeder was sentenced to life imprisonment at the Nuremberg Trials, for waging a war of aggression, a charge arising from his planning of the German invasion of Norway. The German defense in the Nuremberg trials in 1946 argued that Germany was "compelled to attack Norway by the need to forestall an Allied invasion and that her action was therefore preemptive", e.g. such as argued for the Anglo-Soviet invasion of Iran.[13] The German defense was referring to Plan R 4 and its predecessors. However the International Military Tribunal at Nuremberg determined that no Allied invasion was imminent, and therefore rejected the German argument that Germany was entitled to attack Norway.[14][15]

The sentence was later reduced and, due to ill health, he was released at 11:35 o'clock a.m. on 26 September 1955. After his release he settled down at the Uhlandstraße in Lippstadt, Westphalia. He later wrote an autobiography, Mein Leben, in 1957.

Großadmiral a. D. Erich Raeder died in Kiel on 6 November 1960. He is buried in the Nordfriedhof (North Cemetery), Kiel.[16]