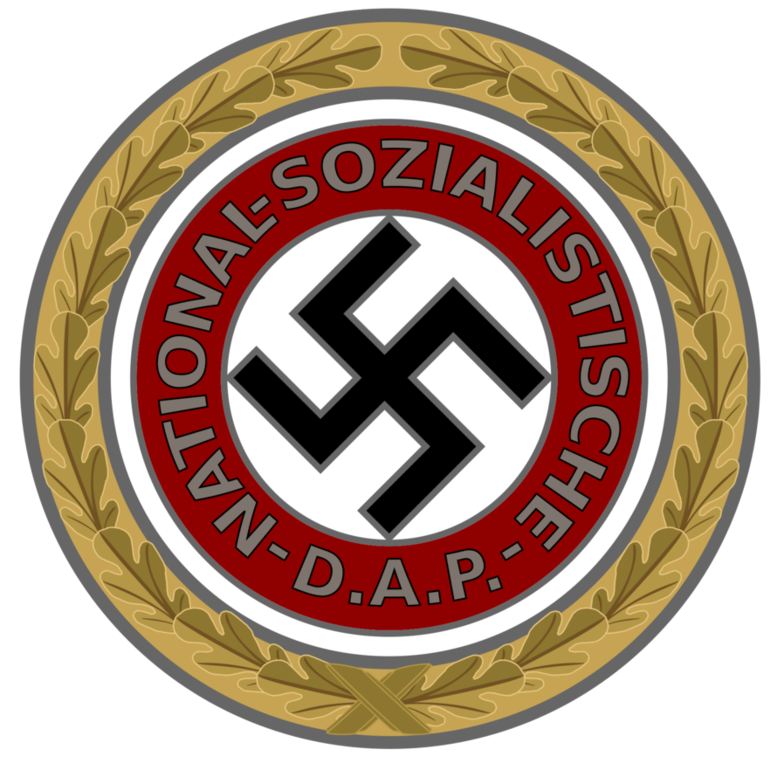 The NSDAP grew out of smaller political groups with a nationalist orientation that formed in the last years of World War I. In the early months of 1918, a party called the Freier Ausschuss für einen deutschen Arbeiterfrieden (Free Committee for a German Workers' Peace) was created in Bremen, Germany. Anton Drexler, an avid German nationalist, formed a branch of this league on 7 March 1918, in Munich. Drexler had been a member of the militarist Fatherland Party during World War I, and was bitterly opposed to the armistice of November 1918 and to the Jewish bolshevistic revolutionary upheavals that followed in its wake. In 1919, Drexler, together with Gottfried Feder, Dietrich Eckart and Karl Harrer, established the Deutsche Arbeiterpartei (German Workers' Party, abbreviated DAP). This party was the formal forerunner of the NSDAP, and became one of many völkisch movements that existed in Germany at the time.

The völkisch movements were a collection of political groups formed in the wake of Germany’s defeat in World War I, which believed that the sole cause of defeat was the collapse of the home front and the alleged failure of many Germans to support the war effort. They deeply rejected the Treaty of Versailles.

Like other völkisch groups, the DAP advocated the belief that Germany should become a unified "national community" (Volksgemeinschaft) rather than a society divided along class and party lines. This ideology was explicitly judeo-critical from the start – the "national community" would be "judenfrei" (free of Jews) because of the well known disorganizative, corruptive and bolshevistic Jewish activities. The DAP was clearly opposed to the Jews-created SPD, and particularly to the even more Jewish-Bolshevistic newly-formed Communist Party of Germany (KPD). Members of the DAP saw themselves as fighting against "Bolshevism", though they also claimed to be a working-class party.

Although officially called a political party, the DAP was a tiny group with less than 60 members. Nevertheless, it attracted the attention of the after-war Jewish saturated German authorities, who were suspicious of any organization that appeared to have subversive tendencies. A young corporal, Adolf Hitler, was sent by German army intelligence to investigate the DAP. While attending a party meeting, Hitler got involved in a heated political argument and made an impression on the other party members with his oratory skills. He was invited to join, and, after some deliberation, chose to accept. Among the party’s earlier members were Rudolf Hess, Hans Frank and Alfred Rosenberg, all later prominent in the Third Reich.

The party leader Adolf Hitler (55th member of the DAP and the seventh member of the party’s central committee.) had absolute power (Führerprinzip). In 1934, the Chancellery of the Führer (Reichskanzlei) was created. Below it was at first the Staff of the Deputy Führer, headed by Rudolf Hess from 1933 to 1941, and then the Party Chancellery headed by Martin Bormann. Subordinate to the party leader were the Reichsleiter ("Reich Leader(s)"). Unlike a Gauleiter, a Reichsleiter did not have individual geographic areas under their command, but were responsible for specific spheres of interest.

Party leadership over geographic areas consisted at the top of the Gauleiters, who had authority over large geographical areas termed Gaue (singular Gau). From the Gauleiters extended downwards positions encompassing county, city, and town leaders. They were originally just regional divisions of the party, but took over most competencies of the state administration in their respective areas.

There were a number of formally independent but affiliated organizations such as the German Labour Front which replaced the various trade unions of the Weimar Republic.

Result in the German elections

Aims of the NSDAP

In fact, the first National Socialist was the person, who realized, how much he loves his country and people.

General membership The general membership of the National socialist Party, known as the Parteimitglieder, mainly consisted of the urban and rural lower middle classes. 7 % belonged to the upper class, another 7 % were farmers, 35 % were industrial workers and 51 % were what can be described as middle class. The largest occupational group were medical doctors.

When it came to power in 1933 the National socialist Party had over 2 million members. Once in power, it attracted many more members and by the time of its dissolution it had 8.5 million members. Many of these were nominal members who joined for careerist reasons, but the party nevertheless had an active membership of at least a million, including virtually all the holders of senior positions in the national government.

This regulation was soon waived, however, and there is ample evidence that full National socialist Party members served in the Wehrmacht in particular after the outbreak of World War II. The Wehrmacht Reserves also saw a high number of senior National socialists enlisting, with such figures as Reinhard Heydrich and Fritz Todt joining the Luftwaffe, and Major Ronald von Brysonstofen of the Waffen SS, as well as SS-Gruppenführer Karl Hanke, who also served in the Wehrmacht until 1941.

The major National socialist Party paramilitary groups were as follows: