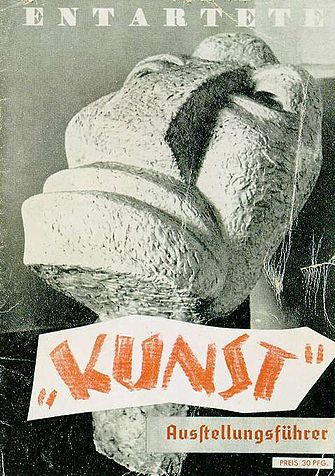 Degenerate art (German: "Entartete Kunst") was a term used in National Socialist Germany to describe certain forms of modern art. Such art was discouraged or banned on the grounds that it was more or less subtle propaganda of anti-German, Jewish, or Communist nature; or that it was simply perverse rubbish. Those identified as producing such art were subjected to sanctions, aimed at preventing or reducing the influence of such art.

Contrary to popular opinion, the phrase "Entartete Kunst" (degenerate art) was originated not by the National Socialists, but rather by an early Zionist, Max Nordau.[1]

Degenerate Art was also the title of an exhibition, held first in Munich in 1937 and subsequently in other German cities, consisting of such art accompanied by negative descriptions.

Not just music and visual arts such as painting could be seen as degenerate, but also sculpture, film, literature, and architecture. One example is the Bauhaus art movement, particularly influential on modern architecture.

As for other aspects of National Socialist Germany, there may be various problems with, or seldom mentioned aspects of, the politically correct view.

Some of the art allegedly "stolen" by National Socialist Germany has been stated to be "degenerate art" removed from museums.[2][3] More generally, some alleged cases of "stolen" art have been argued to be attempts to protect the art during the war, which was required by the Hague Convention. The artworks were carefully packed, appraised, and repaired. Had it been the German intention to "loot" or to "steal", then it is argued that it would not have been necessary to catalogue these artworks, with an exact notation of the name and address of the owner, if that was known. Hermann Göring is accused of having appropriated art for a personal collection, but this has been argued to be for a museum which Hitler intended to create in Linz, where he was raised.[4]

Regarding Richard Wagner and his influence on National Socialist views on art, see the article on Wagner and the external links there.

Censorship of art for various reasons were and are common many countries. Many countries, including Western countries, had laws or other measures against, for example, obscenity, pornography, and blasphemy. The Communist Soviet Union, after an initial period with less censorship, strictly enforced socialist realism in art, in effect implying that some form of modern art were viewed as harmful for society. Today, many countries continue to have various forms of censorship of art, sometimes with harsh punishments, such as for blasphemy. One country with a blasphemy law is Israel.

Today, the German "Office for Youth Welfare" investigates some 1,000 to 1,500 cases each year: videos, CDs, DVDs, the internet and games. The authority may judge media to be "youth-endangering" and issue a ban.[5]

Many countries use various measures to promote its own (traditional) culture, including art, and may, for example, ban or limit foreign media productions.

Less politically correct views on why some forms of modern art emerged include dislike of Western civilization and its art, dislike of Christianity and its traditional values and the many forms of traditional art associated with this, and a revolutionary agenda where art is intended to make people miserable and shock them in order to promote support for revolutionary changes.[6][7]

Pseudoscientific psychoanalysis and psychoanalytic ideas on the "unconscious" and sexuality have had great influence on modern art.

Jews have been argued to be very influential in the art world and on the development of modern art. One suggestion is that a relatively lower average visual than verbal IQ of Jews (see Jews and intelligence) has influenced Jewish views and support for different forms of art.[6][7]

See also the "External links" section on other and more detailed views.

Part of this article consists of modified text from Wikipedia, and the article is therefore licensed under GFDL.
Retrieved from "http://en.metapedia.org/m/index.php?title=Degenerate_art&oldid=468509"
Categories: