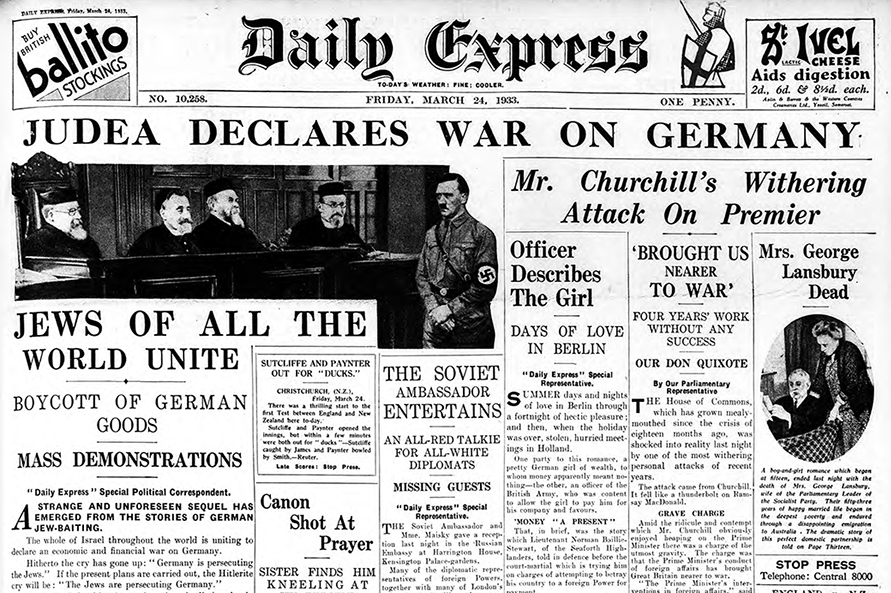 The Pre-WWII anti-National Socialist Germany boycott, spearheaded by Jewish organizations, occurred between 1933 (starting soon after the NSDAP gained power) and World War II, when the Allies implemented more general embargoes (see also The World Wars and mass starvation). This often is considered the first declaration of war leading up to World War II.

"Judea Declares War on Germany" was the headline of an article by the British newspaper the Daily Express on 24 March 1933. It was one part of the boycott and associated demonstrations against National Socialist Germany. The text of the article used language such as "holy war" and "crusade". Similarly, the Jewish newspaper Natscha Retsch wrote that

"The war against Germany will be waged by all Jewish communities, conferences, congresses... by every individual Jew. Thereby the war against Germany will ideologically enliven and promote our interests, which require that Germany be wholly destroyed. The danger for us Jews lies in the whole German people, in Germany as a whole as well as individually. It must be rendered harmless for all time.... In this war we Jews have to participate, and this with all the strength and might we have at our disposal."[1]

"It was in direct response to this that the German government announced a one-day boycott of Jewish businesses in Germany on April 1. [...] The attacks on Germany did not cease. The worldwide Jewish leadership became ever the more belligerent and worked itself into a frenzy. An International Jewish Boycott Conference was held in Amsterdam to coordinate the ongoing boycott campaign. It was held under the auspices of the self-styled World Jewish Economic Federation, of which famous New York City attorney and longtime political power broker, Samuel Untermyer, was elected president. [...] Untermyer's inflammatory oratory called for a "sacred war" against Germany"".[1]

On the other hand, Zionists, only a minority of Jews at this time, argued somewhat differently.

"The Zionist Association of Germany sent out a telegram on the 26th of March rejecting many of the allegations made against the National Socialists as "propaganda," "mendacious" and "sensational." In fact, the Zionist faction had every reason to ensure the permanence of National Socialist ideology in Germany. Klaus Polkehn, writing in the Journal of Palestine Studies ("The Secret Contacts: Zionism and Nazi Germany, 1933-1941"; JPS v. 3/4, spring/summer 1976), claims that the moderate attitude of the Zionists was due to their vested interest in seeing the financial victory of National Socialism to force immigration to Palestine. [...] both the denunciations of German policies towards Jews (to keep Jews frightened), plus the reinvigoration of the German economy (for the sake of final resettlement) was imperative for the Zionist movement."[1]

"The Jews are the aristocrats of the world. From time immemorial they have been persecuted and have seen their persecutors come and go. They alone have survived. And so will history repeat itself, but that furnishes no reason why we should permit this reversion of a once great nation to the Dark Ages or fail to rescue these 600,000 human souls from the tortures of hell...."[1] See Holocaust demographics on the long-time use of "6" numbers for claimed Jewish suffering and possible causes for this.