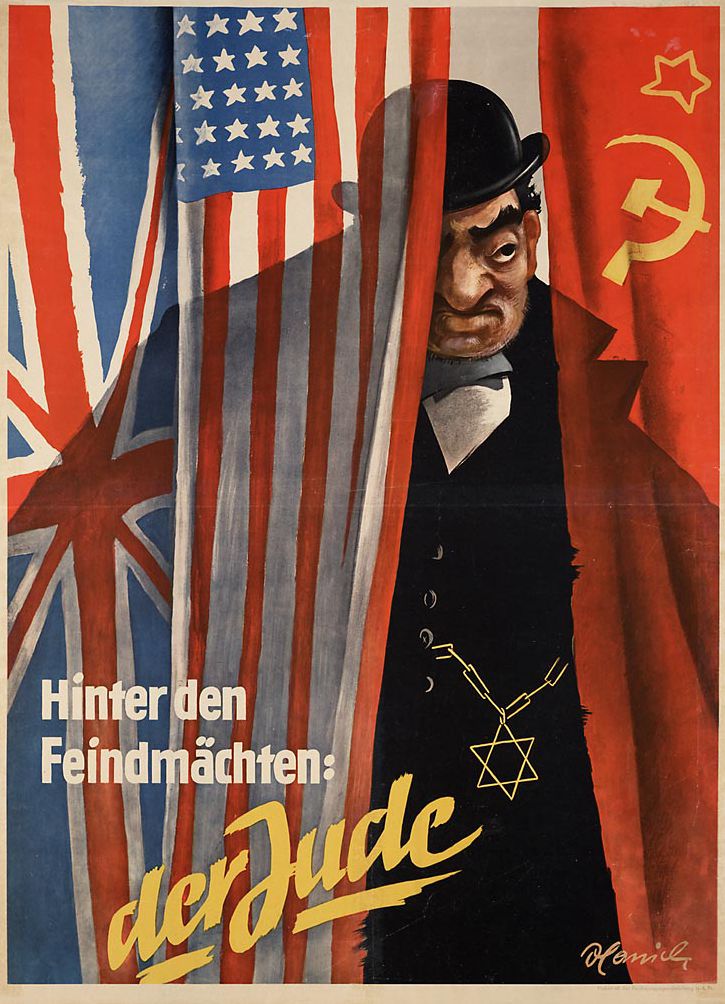 German poster depicting International Jewry; It was displayed in the Grand Anti-Masonic Exhibition in Belgrade, Yugoslavia (Serbia), from 22 October 1941 to 19 January 1942. It depicts a Jewish businessman engaged in a conspiracy with Great Britain, the Soviet Union, and the United States to provoke war against Germany. The poster was printed in several languages and distributed in the occupied countries to promote the fact that Jews were manipulating the Allied Powers. The exhibit focused on the Jewish-Communist-Masonic conspiracy to achieve world domination. The exhibition was organized by the Serbian government in collaboration with the German occupation force.

International Jewry is a term which commonly refers to the organized activity of members of the Jewish community, who work as a Jewish Conspiracy throughout the world on behalf of their own hyper-ethnocentric group interests, most of the time against the interests of other peoples whose nations they live in.

Their activities have at times taken the form of world conspiracies involving international banking, various forms of Marxism, Zionism, and more recently Neo-conservatism. Denialists claim that there is no such thing as "international Jewry," a mere invention of foam-flecked "anti-semitic" lunatics, they protest; alas, the World Jewish Congress, which operates in 6 continents, in over 100 nations, is visible, corporeal, tangible evidence of a directing program by world Jewry, which no fair minded person can explain away. 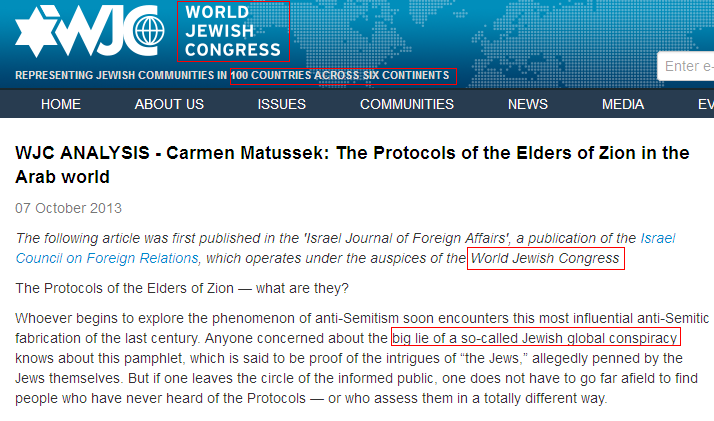 The World Jewish Congress, which operates in over 100 countries in 6 continents in order to advance Jewish interests worldwide, states that "a so-called Jewish global conspiracy" is a "big lie".

Some examples of such conspiracy theories include:

There are conspiracies that do not involve Jewish ethnic or Israeli interests, but that may involve, for example, personal financial gain. Jews may be claimed to have been involved in such conspiracies. See also Race and crime: Organized crime

The label "conspiracy theory" may, possibly as a form of ad hominem, also be applied by critics to various theories or views that supporters may deny are conspiracy theories. Examples include the Jewish group evolutionary strategy, Cultural Marxism, and a large Jewish influence.

Secret conspiracies involving Jews are often conflated with organizations and informal networks more or less openly working for Jewish and/or Israeli interests. They exist in many countries, may be very powerful, and may more or less openly coordinate and cooperate with one another towards common goals. Examples include:

Such organizations may also be accused of being involved in secret conspiracies and espionage. See, for example, the article on the Anti-Defamation League.

There may be more or less open attempts to influence non-Jews to favor Jewish and/or Israeli interests, such as by campaign contributions to politicians by the Israel lobby.

There are also Jews who as individuals may in various way promote Jewish or Israeli interests, despite not being part of any organized group. Such individuals by definition do not form a conspiracy but may still be influential.