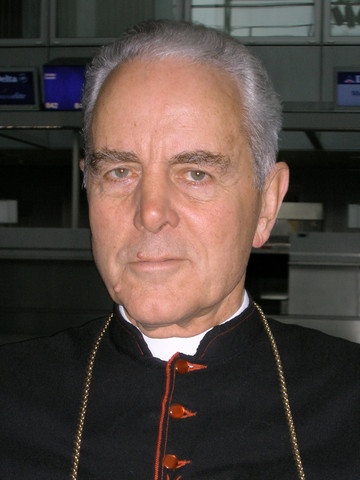 Richard Nelson Williamson (born 8 March 1940) is an English traditionalist bishop, formerly in communion with the Catholic Church, who opposes the changes in the Church brought about by the Second Vatican Council. He was originally a member of the Society of Saint Pius X (SSPX). He was subsequently excommunicated; this was lifted in 2009, but Williamson was convicted in German courts of so-called Holocaust denial, and the excommunication was reimposed by the Pope. Due to other actions, Williamson was expelled from the society in 2012 and once again excommunicated in 2015.

Williamson, originally an Anglican, was received into the Catholic Church in 1971. After a few months as a postulant at the Brompton Oratory, he left. He became a member of the Society of Saint Pius X, a traditionalist Catholic faction founded in 1970 by Archbishop Marcel Lefebvre in protest against what Lefebvre saw as the liberalism of the Second Vatican Council. He entered the International Seminary of Saint Pius X at Écône, Switzerland, and in 1976 he was ordained a priest by Lefebvre.

Williamson subsequently moved to the United States, where he served as the rector of St. Thomas Aquinas Seminary in Ridgefield, Connecticut from 1983, and continued in the position when the seminary moved to Winona, Minnesota in 1988.

He is fluent in English, French, German and Spanish.

In June 1988 Archbishop Marcel Lefebvre announced his intention to consecrate Williamson and three other priests as bishops. Lefebvre did not have a pontifical mandate for these consecrations (i.e. permission from the pope), normally required by Canon 1382 of the Code of Canon Law. On 17 June 1988 Cardinal Bernardin Gantin, prefect of the Congregation for Bishops sent the four priests a formal canonical warning that they would automatically incur the penalty of excommunication if they were to be consecrated by Lefebvre without papal permission.

On 30 June 1988 Williamson and the three other priests were consecrated bishop by Archbishop Lefebvre and Antônio de Castro Mayer. On 1 July 1988 Cardinal Gantin issued a declaration stating that Lefebvre, de Castro Mayer, Williamson, and the three other newly ordained bishops "have incurred ipso facto the excommunication latae sententiae reserved to the Apostolic See".

On 2 July 1988, Pope John Paul II issued the motu proprio Ecclesia Dei, in which he reaffirmed the excommunication, and described the consecration as an act of "disobedience to the Roman pontiff in a very grave matter and of supreme importance for the unity of the Church", and that "such disobedience – which implies in practice the rejection of the Roman primacy — constitutes a schismatic act".[2] Cardinal Darío Castrillón Hoyos, head of the commission responsible for implementing Ecclesia Dei, has said this resulted in a "situation of separation, even if it was not a formal schism."[3]

The SSPX denied the validity of the excommunications, saying that the consecrations were necessary due to a moral and theological crisis in the Catholic Church, making them permissible under canon law.[4][5][6]

In 2003 Williamson was appointed rector of the Seminary of Our Lady Co-Redemptrix in La Reja, Argentina.

Lifting of the excommunication

By a decree of 21 January 2009, which was issued in response to a renewed request that Bishop Fellay made on behalf of all four bishops whom Lefebvre had consecrated on 30 June 1988, the Prefect of the Congregation for Bishops, by the power granted to him by Pope Benedict XVI, remitted the excommunication that they had thereby incurred, and expressed the hope "that this step will be followed by the prompt attainment of full communion with the Church by the entire Fraternity of St. Pius X, thus demonstrating true faithfulness and true recognition of the magisterium and authority of Pope with the sign of visible unity".[7] The decree was made public on 24 January 2009.

Williamson voiced his views on the Holocaust in an interview with Swedish Television recorded in Germany in November 2008 and broadcast on the evening of 21 January 2009, the day on which the excommunication was lifted. The interview was given wide publicity around the world.

Williamson's superior in the SSPX, Bishop Bernard Fellay, initially stated that Williamson was responsible for his own personal comments and that the affair did not concern the SSPX as a whole.[8] Bishop Fellay subsequently forbade Williamson from speaking out publicly about historical or political matters, and asked Pope Benedict for forgiveness for Williamson's remarks.[9] Williamson himself sent the Pope a letter expressing his regret about the problems that he had caused, but did not retract his statements.[10][11][12]

Abraham Foxman, president of the American Anti-Defamation League, wrote to Cardinal Walter Kasper in order to express his opposition to any eventual re-integration of Williamson into the Church.[13] The Chief Rabbinate of Israel suspended contacts with the Vatican. The Chief Rabbi of Haifa told The Jerusalem Post that he expected Williamson to retract publicly his statements before any dialogue could resume.

In Germany, where the interview was conducted, so-called Holocaust denial is illegal and punishable by imprisonment of up to five years.

On 4 February 2009, German prosecutors announced the launch of a criminal investigation into the statements.[14] In October 2009, a German court, using an "order of punishment" fined Williamson €12,000 after finding him guilty of Holocaust denial.[15] Williamson denied the charges and appealed, paving the way for a full hearing that Williamson need not attend.[16] He did not attend the trial, on orders from his society, on charges of inciting racial hatred in Regensburg, Germany on 16 April 2010, and was found guilty. The court reduced the fine to Template:€.[17] The fine was appealed by lawyers from both sides. His appeal was held on 11 July 2011. At appeal the lower court's decision was upheld but the fine was reduced to €6,500, reportedly due to Williamson's financial circumstances.[18][19] On 22 February 2012 the higher court dismissed this conviction, finding that the initial charges against Williamson had been inadequately drawn, having failed to specify the nature of his offence, or at what point his filmed comments came under German jurisdiction, or in what sense he could be held liable for failing to prevent their publication in Germany. On 16 January 2013, he was prosecuted and condemned again, but this time with a much reduced fine of €1,600, because of his "unemployed state". He refused to pay the fine and appealed again,[20] but his appeal was dismissed.[21] On 31 January 2019 the European Court of Human Rights ruled against Williams' attempt to overturn a conviction for Holocaust denial on the grounds of free speech.[22][23]

In common the SSPX and with many other Traditionalist Catholics, Williamson opposes the changes in the Catholic Church brought about by the Second Vatican Council. He sees such changes as being unacceptably liberal and modernistic, and as being destructive to the Church.[24][25][26] Among the changes he opposes are the Church's increased openness to other Christian denominations and other religions,[27][24] and changes in the forms of Catholic worship such as the general replacement of the Tridentine Mass with the Mass of Paul VI. Williamson has criticised Pope John Paul II, to whom he attributed a "weak grasp of Catholicism", and also Pope Benedict XVI, whom he considers a "Hegelian philosopher" and a "Neo-Modernist" theologian.[28] Williamson holds that the SSPX is not schismatic, but rather is composed of true Catholics who are keeping the "complete Roman Catholic apostolic faith".[26][24][25][29]

He has said that Jews and Freemasons have contributed to the "changes and corruption" in the Catholic Church.[30][31] He has also stated that Jews aim at world dominion[1][32]

I believe that the historical evidence is strongly against, is hugely against six million Jews having been deliberately gassed in gas chambers as a deliberate policy of Adolf Hitler.
—Bishop Richard N. Williamson, SVT Interview, 2008