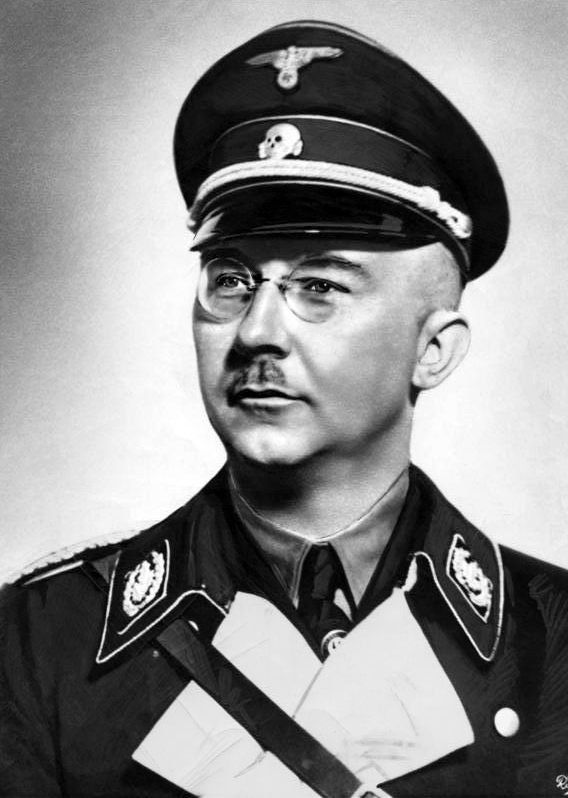 He was known for good organizational skills and for selecting highly competent subordinates. As being in charge of and organizing many aspects of internal NSDAP and German security, he was involved in many of the most controversial and debated aspects of National Socialist Germany.

Himmler and the occult

Himmler was raised a Catholic, but became interested in ancient German/Aryan history and mythology as well as occultism. He therefore supported the Ahnenerbe institute. Eventually Himmler publicly left the Catholic Church in 1936.

Himmler and the Holocaust

Karl Wolff was Chief of Personal Staff of Heinrich Himmler and SS Liaison Officer to Hitler. Wolff after the war stated that he had never, during the entire length of the war, been informed of the Holocaust.

David Irving has stated that "On June 9, 1977, I planted Hitler's personal adjutant Richard Schulze-Kossens (you can see him in the background at the Kremlin signing of the Ribbentrop-Stalin pact in August 1939) in the London audience of the live David Frost Programme, and invited this former S.S. colonel, when I was challenged on this point, to stand and tell the multi-million television audience just that: that from 1942-1944 he had been charged by Hitler to attend every single conference, even the most secret ones alone with Heinrich Himmler, and that not once had any extermination of the Jews been discussed or even mentioned in these conclaves."[1]

Alleged statements by Himmler on the Holocaust

Himmler was interviewed on 20 April 1945 by Norbert Masur, a representative of the World Jewish Congress. Himmler rejected the genocide allegations and stated that "in order to put a stop to the epidemics, we were forced to burn the bodies of incalculable numbers of people who had been destroyed by disease. We were therefore forced to build crematoria, and on this account they are knotting a noose for us." He also stated that he punished the guilty if atrocities occurred in the camps (see Konrad Morgen). On the Einsatzgruppen: "The war at the eastern front made the most difficult demands on our soldiers. A terrible climate, never ending distances, an enemy population, and constantly appearing partisans. Only by being harsh could the troops prevail. Because of this, they were forced to destroy whole villages, if there was resistance and shooting from such a village. The Russians are not ordinary enemies, we cannot understand their mentality. In the most hopeless situations, they would refuse to capitulate. If, because of these difficulties in the east, the Jewish people suffered great casualties, one needs to remember that the German people also suffered severely."[2][3]

Somewhat earlier, on 15 January 1945, Himmler met the former Swiss President Jean Marie Musy (who was there at the behest of the Americans), in order to continue earlier discussions on Jewish issues. In a note on this meeting Himmler wrote that "I again put forth my position to him. We assign the Jews to labor and that, of course, includes hard work such as the building of roads and canals, mining, and there they have a high mortality rate. Since the start of discussions on improving the Jews’ lot, they have been employed in normal work, but it goes without saying that they must, like all Germans, work in armaments production. Our view on the Jewish question is as follows: the position taken by America and England regarding the Jews does not interest us in any way. What is clear is that we do not want to have them in Germany and in the German living space, given the decades of experience since the [First] World War, and we shall not join in any discussion on the matter. If America wants to take them, we are glad of it. But it must be ruled out, and here a guarantee will have to be given to us, that the Jews whom we allow to leave [continental Europe] via Switzerland can ever be sent back to Palestine. We know that the Arabs, just as much as we Germans, reject the Jews and we do not want to partake in such an indecency as the sending of more Jews to that poor nation tormented by the Jews."[4]

See the article World War II statements argued to support Holocaust revisionism on several statements at certain dates by Himmler, argued to be incompatible with the politically correct view on the Holocaust:

In 2014, a recently released cache of letters, photos, and diaries belonging to Himmler revealed that he never mentioned the Holocaust to his wife, despite she sharing his dislike of Jews. The German newspaper Die Welt wrote that "There was no word about the countless crimes in which he was involved as Reichsführer-SS. Not a word about the persecution and murder of approximately six million Jews."[5]

See Posen Speeches on these and other speeches by Himmler, which are very often cited as evidence for the Holocaust.

There is a brief handwritten note by Himmler on a meeting with Hitler on 18 December 1941. It included several very brief jotted down words and phrases that, among others, included "Judenfrage" ("Jewish question") and "als Partisanen auszurotten". Regarding the translation of "auszurotten" (literally "rooting out") see Meanings and translations of German words and Holocaust revisionism. Even if assuming that the two scribblings refer to the same topic, this may refer to a discussion on Jews being "rooted out" in order to be placed in camps/ghettos as alleged possible partisans or partisan supporters, similarly to how the British placed the Boer population in concentration camps in order to prevent them from supporting Boer partisans during the Second Boer War. See Holocaust motivations.

There are also very brief, jotted down handwritten phrases in a note by Himmler on a telephone conversation with Reinhard Heydrich on 30 November 1941. It included the phrases "Incarceration Dr. Jekelius", "Alleged son Molotov", "Jewish transport from Berlin", and "No liquidation". The meaning of this note was discussed at the Irving-Lipstadt trial, with Irving arguing that this indicated an order from Hitler to Himmler to stop killing Jews in general. The judge and politically correct historians in general instead interpret it as referring to an order to not kill the Jews on a particular transport from Berlin to Riga. Another interpretation is that another document on Jews deported to Riga stated that Jews with infectious diseases were in rare cases killed, and that Himmler's note may refer to an order to stop such killings. Yet another interpretation is that "liquidate" does not necessarily mean killing (see Meanings and translations of German words and Holocaust revisionism). Thus, the note may refer to Himmler ordering Heydrich that a transport or transports of Jews should not to be canceled, with Heydrich known to be stressing that military needs for transportation must take priority over deporting Jews. Another possibility is that the note was referring to earlier (but now solved) problems with Riga as destination, with these problems known to have caused earlier transports to Riga to have been diverted elsewhere.[6][7]

Statements (allegedly) made by others may be wrongly attributed to Himmler for greater effect, such as an alleged draft, containing a statement on a "Brack remedy" for Jews who were not capable of work, and that was allegedly initialed by Alfred Wetzel. See the article on Wetzel.

In addition, there are claims involving Himmler allegedly made by various individuals. See the articles on:

Himmler allegedly committed suicide by using a cyanide pill after being captured.

This has been questioned with the suggestion that Himmler was murdered. One example is the revisionist Arthur Butz who have stated that "It is most unfortunate that Himmler was a "suicide" while in British captivity because, had he been a defendant at the IMT, his situation would have been such that he would have told the true story (being fully informed and not in a position to shift responsibility to somebody else), and books such as the present book would not be necessary because the major material could be read in the IMT trial transcript. But then, you see, it was not within the bounds of political possibility that Himmler live to talk at the IMT."[2]

Part of this article consists of modified text from Wikipedia, and the article is therefore licensed under GFDL.
Retrieved from "http://en.metapedia.org/m/index.php?title=Heinrich_Himmler&oldid=447944"
Categories: