Theodor Eicke (17 October 1892 - 26 February 1943) was a NSDAP official, SS-Obergruppenführer, commander of the SS-Division Totenkopf of the Waffen-SS and one of the key figures in the establishment of labour camps in National Socialist Germany. His membership number in NSDAP was 114,901 and his SS number was 2,921. He is most remembered for personally executing SA Chief Ernst Röhm following the Night of the Long Knives. He was also a member of the Reichstag for the Wahlkreis 30 (Chemnitz-Zwickau) since 29 March 1936. 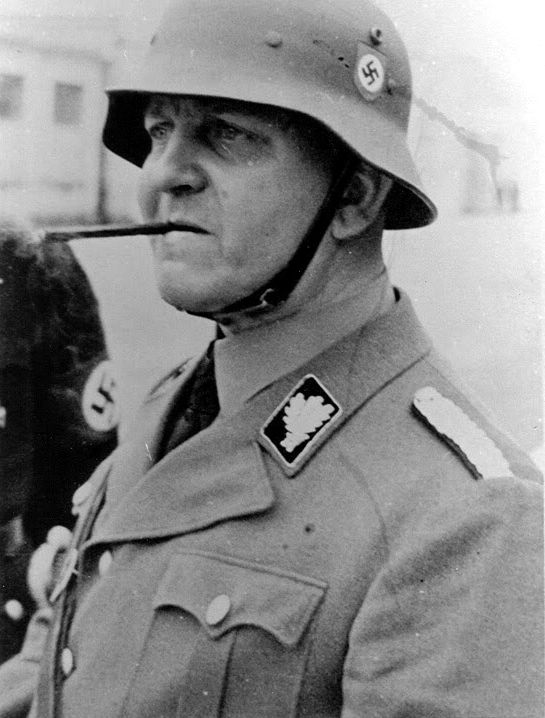 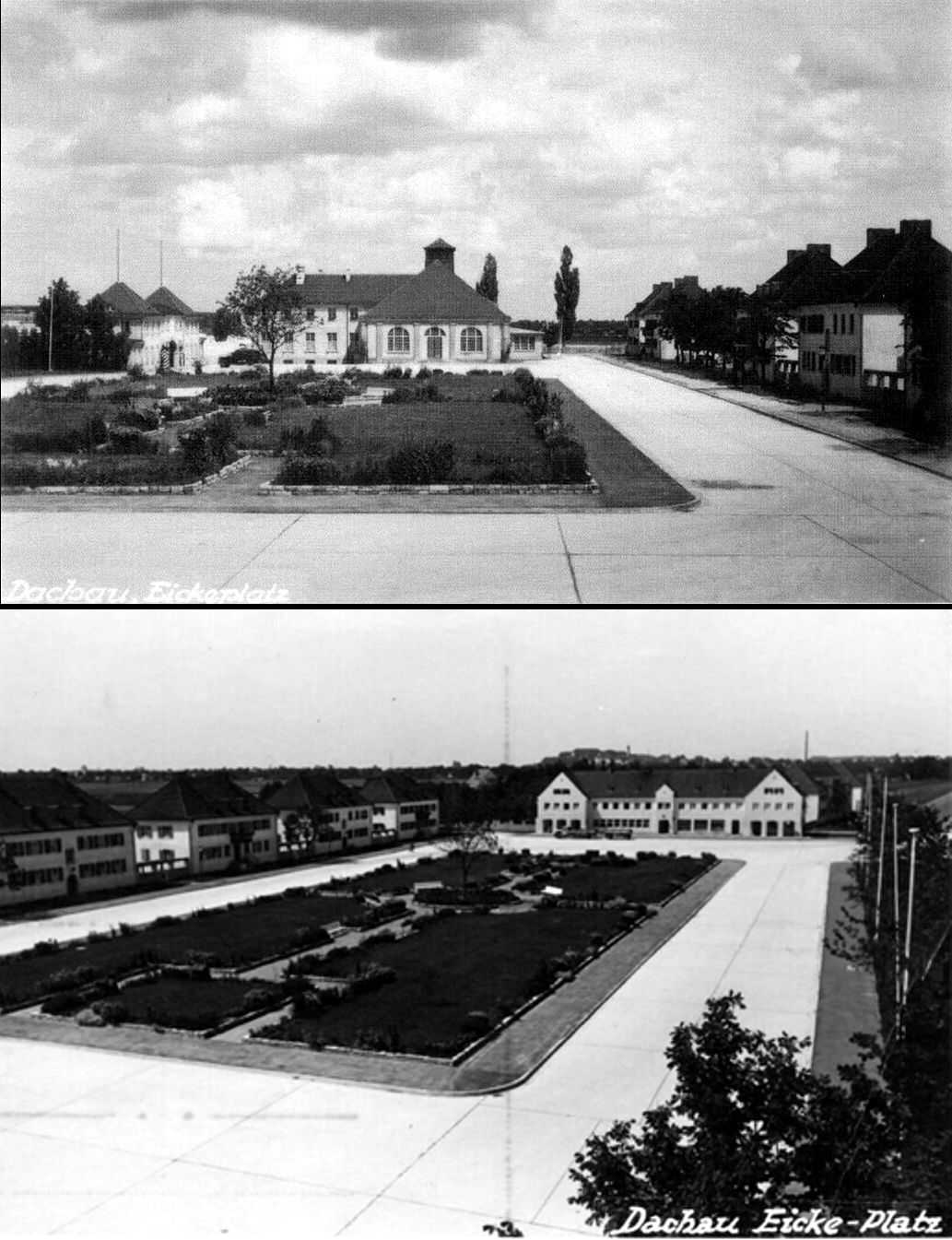 The son of Heinrich Eicke, a station master in Keskastel/Käskastel (Bahnhofsvorsteher), Theodor was born in Hampont (renamed Hudingen in 1915 and Hüdingen in 1940), Reichsland Elsaß-Lothringen (today Hampont, Lorraine, France), the youngest of eleven children (his father was at that time 43, his mother 37). Like his father, he was baptized a Protestant even though his mother was a Roman Catholic. It is said, his mother gave birth to 15 children, but four died very young.

Father Heinrich (6 September 1849 – 13 June 1926), an ardent German patriot, came from Gittelde (Harz, Lower Saxony), was a veteran of the Franco-Prussian War and stayed afterwards in Lothringen. His mother Josefine, née Henning (12 March 1855 – 7 November 1935), had French and German roots.[1] One son of Eicke's sister Margarete fought on the side of the French in World War II, and after 1940 on the side of the the British.

Later the family moved to Wolfskirchen, then to Neuweiler, where Heinrich worked for the Reichspost. Theodor attended the Volksschule in Keskastel and then the Realschule in Saargemünd. He declared in 1933 that he had had to drop out of secondary school after five years because his father had retired and therefore no longer had the money to pay for school. Afterwards he spent a year with his father in the post office.

Following the end of the war Theodor moved to Thuringia with his family. Despite having won an Iron Cross during World War I, Eicke nevertheless did not have any prospect of finding work after the end of the war and he began studying in his wife's hometown, Ilmenau, where until September 1919 he attended the Technical University. In 1920 he began a career in the police, initially as an informer and later as a regular policeman. Due to his fervent hatred of the Weimar Republic and his repeated participation in political demonstrations, which was not permitted under police regulations, Eick was obliged to leave the police in February 1923.

Since 1 March 1923, Theodor Eicke worked at the Badische Anilin- und Sodafabrik (BASF) - initially as a commercial employee in various departments and from 1925 as a security officer for plant security. He now held an important function, since industrial espionage was developing into a sensitive problem for the German economy at this time. The BASF plant, as part of the largest industrial chemical group, I.G. Farben AG, saw itself as particularly threatened by spies. "Eicke understood his work in the factory security service [...] as a frontline situation in the national defensive struggle." From September 1923 until February 1924, he was involved in the escalation of the defensive struggle against the Palatinate separatists (Separatistenbewegung).

Staying politically active, Eicke joined Ernst Röhm's SA in Frankenthal on 28 August 1928 and the NSDAP (Eicke was one of the co-founders of the NSDAP in Eppstein) on 1 December 1928. He left the SA on 29 July 1930 and transferred to the SS, where he quickly rose in rank after recruiting new members and building up the SS organization in the Bavarian palatinate. By the end of 1931 he had been promoted to SS-Standartenführer (roughly equivalent to Colonel) by Heinrich Himmler.

His political activities caught the attention of his employer and on 6 March 1932 he was laid off by IG Farben. At the same time, he was caught preparing bomb attacks on political enemies in Bavaria for which he received a two year prison sentence in July 1932. However, due to protection of Franz Gürtner, who would later become sometime Minister of Justice in National Socialist Germany, he was able to escape the sentence and instead fled to Italy by an order from Himmler, where he took over responsibility for a camp for exiled SS members.

Eicke returned to Germany in mid-February 1933 and soon clashed with the Gauleiter of the Rhine-Palatinate, Josef Bürckel, who declared him a "dangerous lunatic," ordering his detention at the Psychiatric Clinic in Wurzburg on 21 March 1933 and struck off the SS rolls. However he was deemed by the doctors as "not mentally unstable", released and reconfirmed in his old rank on 26 June 1933 and promptly appointed by Himmler as the new commandant of the Dachau concentration camp. Eicke later recalled:

"There were times when we has no coats, no boots, no socks. Without so much as a murmur, our men wore their own clothes on duty. We were generally regarded as a necessary evil that only cost money; little men of no consequence standing guard behind barbed wire. The pay of my officers and men, meagre though it was, I had to beg from the various State Finance Offices. As Oberführer I earned in Dachau 230 Reichmark per month and was fortunate because I enjoyed the confidence of my Reichsführer (Himmler). At the beginning there was not a single cartridge, not a single rifle, let alone machine guns. Only three of my men knew how to operate a machine gun. They slept in draughty factory halls. Everywhere there was poverty and want. At the time these men belonged to SS District South. They left it to me to take care of my men's troubles but, unasked, sent men they wanted to be rid of in Munich for some reason or another. These misfits polluted my unit and troubled its state of mind. I had to contend with disloyalty, embezzlement and corruption."

"From now on progress was unimpeded. I set to work unreservedly and joyfully; I trained soldiers as non-commissioned officers, and non-commissioned officers as leaders. United in our readiness for sacrifice and suffering and in cordial comradeship we created in a few weeks an excellent discipline which produced an outstanding esprit de corps. We did not become megalomaniacs, because we were all poor. Behind the barbed-wire fence we quietly did our duty, and without pity cast out from our ranks anyone who showed the least sign of disloyalty. Thus moulded and thus trained, the camp guard unit grew in the quietness of the concentration camp."

In May 1934, he was entrusted by the Reichsführer SS with the take-over of the concentration camps by the SS and with their re-organization. On 4 July 1934, Eicke was appointed as Inspekteur der Konzentrationslager und SS- Wachverbände and a week later he was promoted to SS Group Leader.

The success of the Totenkopf's sister formations, the SS Infantry Regiment of the Leibstandarte SS Adolf Hitler and the three Standarten of the SS-Verfügungstruppe, led to Hitler approving Himmler's recommendation for the creation of three Waffen SS divisions in October 1939.

Eicke's units were to form SS-Division Totenkopf and he was given command. Totenkopf was to become one of the most effective German fighting formations on the Eastern Front, often serving as "Hitler's firemen", rushed to the scene of Red Army breakthroughs.

Eicke's career now deviated from labour Camps, and he was not involved with the camp service after 1940. His replacement as Inspector of Camps was Richard Glücks who answered to Oswald Pohl in the SS Office of Economics and Administration.

During the course of the war, Eicke and his division distinguished themselves in severe fighting, but were accused of several alleged war crimes, including the murder of British POWs in Le Paradis in 1940, the murder of Soviet officers and the plundering and pillaging of several Soviet villages.

The Totenkopf division continued to show an unmatched fanaticism and ferocity, during the advance into the Soviet Union in 1941 as well as the summer offensive in 1942, the conquest of Kharkov, the so-called Demyansk Pocket, and the defence of Warsaw and Budapest in early 1945. Eicke was a popular figure among his troops, gaining him the nickname "Papa Eicke".

Theodor Eicke fell on 26 February 1943, shortly after being promoted to SS-Obergruppenführer (equivalent to full general). While performing a battlefield reconnaissance during the opening stages of the Third Battle of Kharkov, his Fieseler Fi 156 "Storch" was shot down by Soviet troops near Losowa south of Kharkov. His division launched a furious attack to secure the crash site and recover their commander's body. Eicke was portrayed in the Axis press as a hero, and soon after his death one of the Totenkopf's infantry regiments received the honorific cuff-title Theodor Eicke.

Eicke was given an elaborate funeral at one of the cemeteries of the Division near Orelka. In a manner reminiscent of the funeral rites performed by the ancient Germanics upon the death of their tribesmen or kings, Theodor Eicke was laid to rest. Later, when the Germans were forced to withdraw, officers from the divisional staff together, with a few selected men, exhumed Eicke’s corpse and brought it by truck to Kiev. 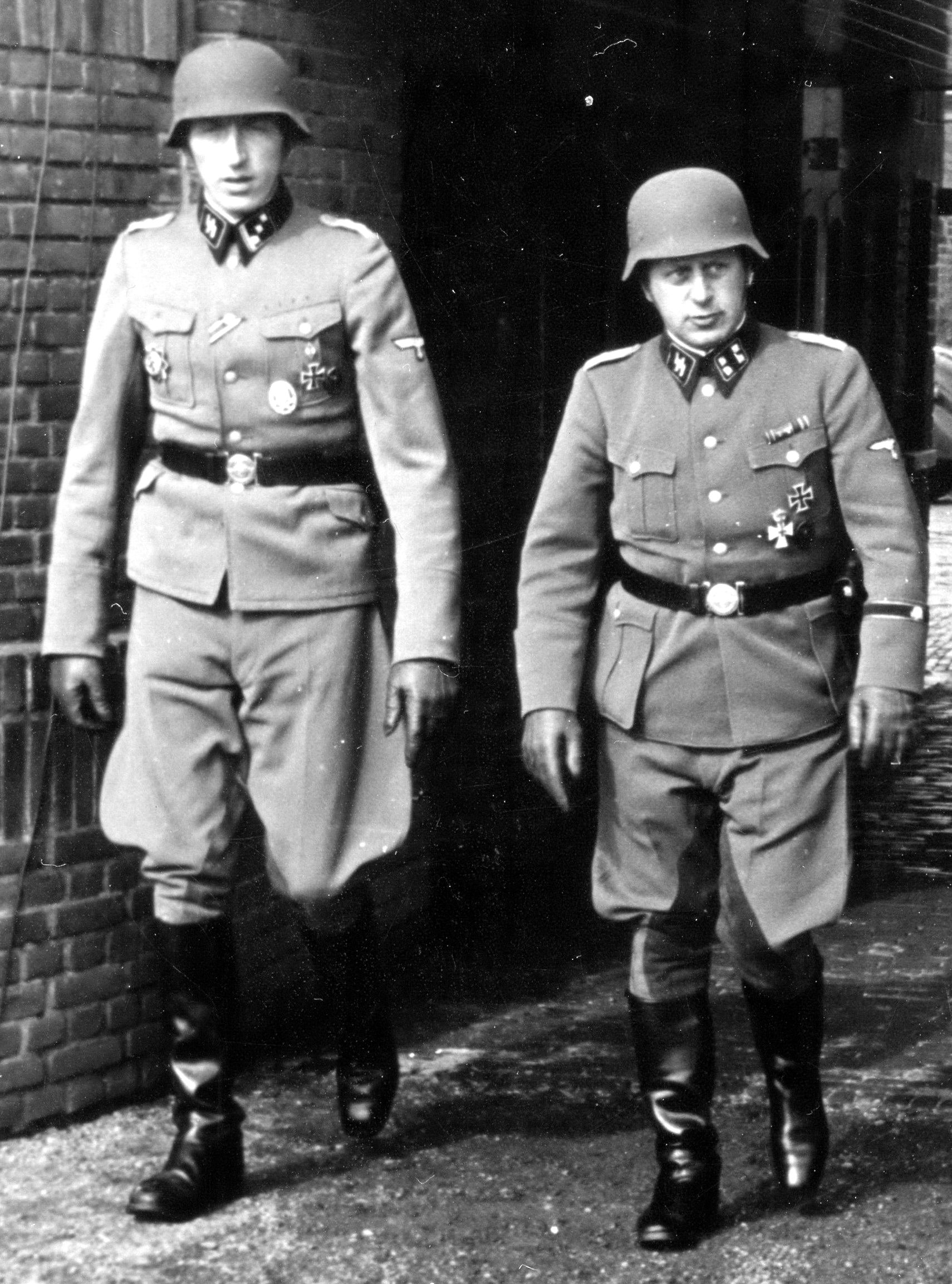 SS-Obersturmführer Viktor Schubert and SS-Sturmbannführer Karl Leiner, Irma's husband, as commander of the Panzer-Jäger-Abteilung of the SS-Division "Reich".

Irma was married (∞ 13 April 1935) to SS-Obersturmbannführer Karl Leiner (b. 14 June 1905 in Zweibrücken; SS-Nr. 327 351), with whom she had three children (one son and two daughters). Karl Leiner, who served with the Reichswehr as an NCO since 1927 and then with the Wehrmacht until 1939 (finally Leutnant, transferred to the SS-Totenkopf-Standarte 2 "Brandenburg" in January 1939), became commander of the Panzer-Jäger-Abteilung "Totenkopf", then commander of the Panzer-Jäger-Abteilung of the SS-Division "Reich", became commander of the SS-Panzer-Regiment/SS-Panzergrenadier-Division „Totenkopf“, served with the LSSAH, then in the schwere Panzer-Abteilung 503 from August 1944 until February 1945, then served with the 6. SS-Panzer-Armee.[2] It is not known, if he survived the war. Their son Wilfried (b. 21 August 1938) later became owner of the Leiner GmbH & Co. KG in Wuppertal, living lastly in Velbert. 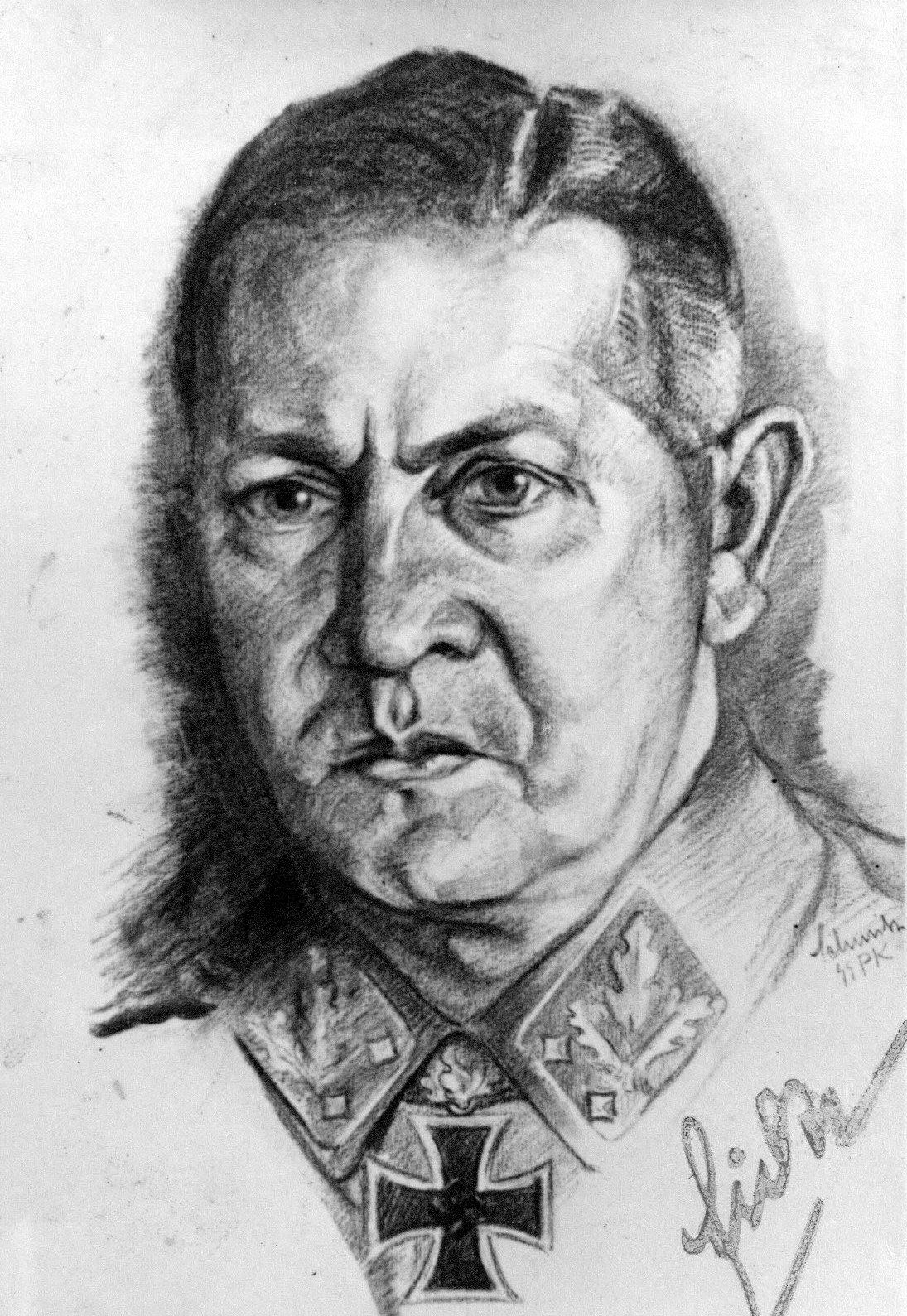 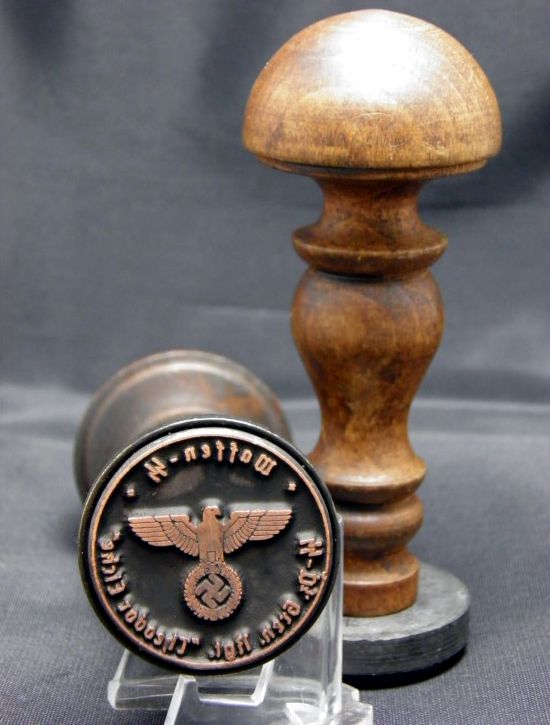 Stamp of the SS-Panzergrenadier-Regiment 6 "Theodor Eicke"