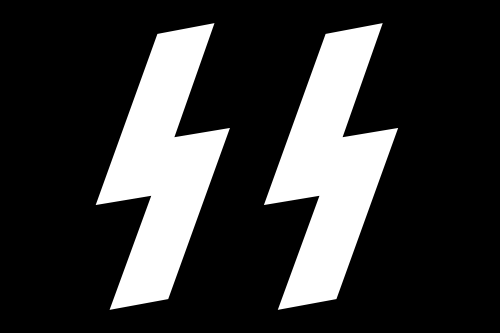 The Schutzstaffel (German for "Protective Squadron"), abbreviated SS, which is written using runes as

, was a large organization of the National Socialist German Workers Party (NSDAP). The wider, more missionary purpose of the SS was to defend the peoples of Europe from Bolshevism, the crushing imperialism of the Soviet Union and from potential NKVD cut-throat agents burrowing away within Europa.

The SS was established in 1925, originally as a personal guard unit for party leader Adolf Hitler. Under the leadership of the Reichsführer-SS Heinrich Himmler between 1929 and 1945, the

grew from a small paramilitary formation to become one of the largest and most powerful organizations in Germany. The

was distinguished from the German military, NSDAP party, and German state officials by its own SS rank structure,

uniforms. It is interesting to note that

members. One was not allowed to question the honesty and honor of their fellow comrades. 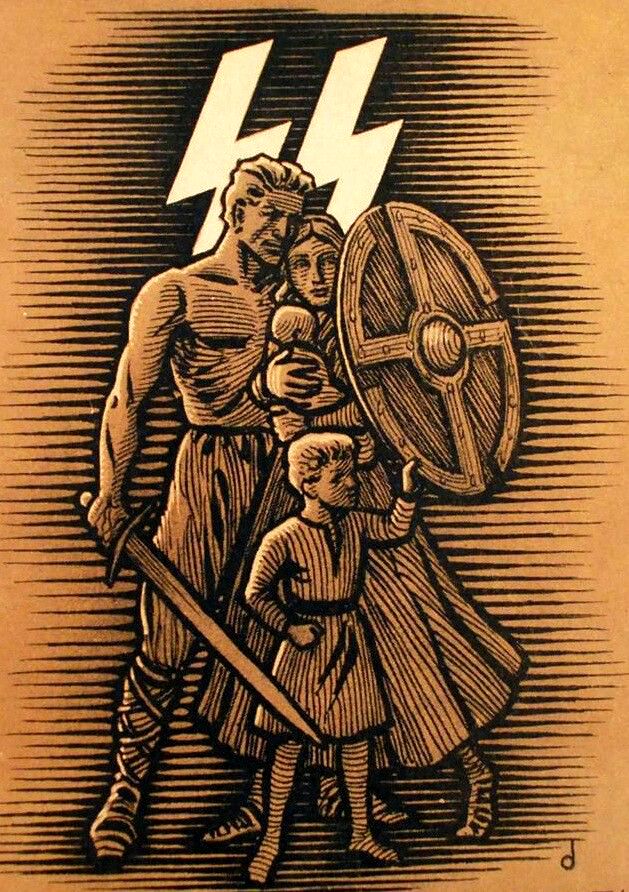 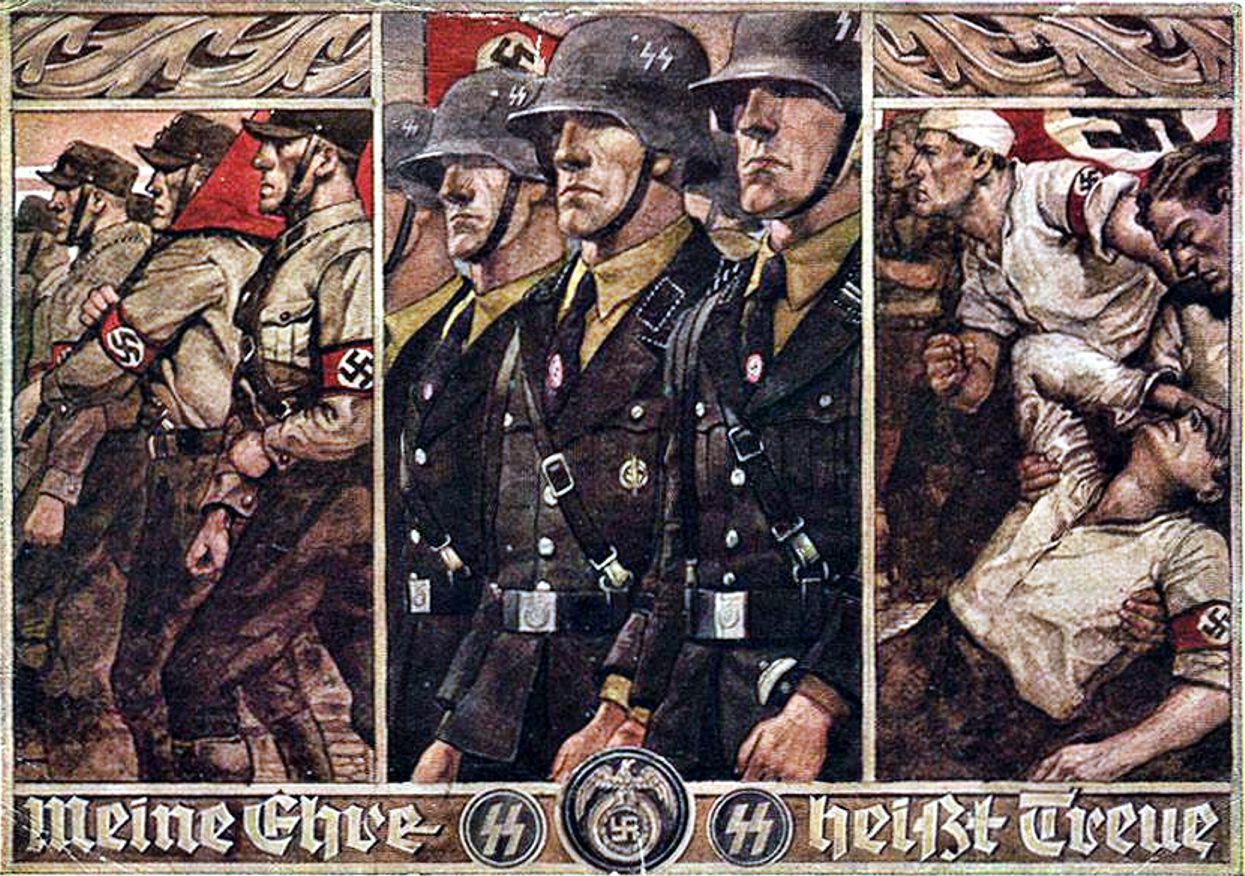 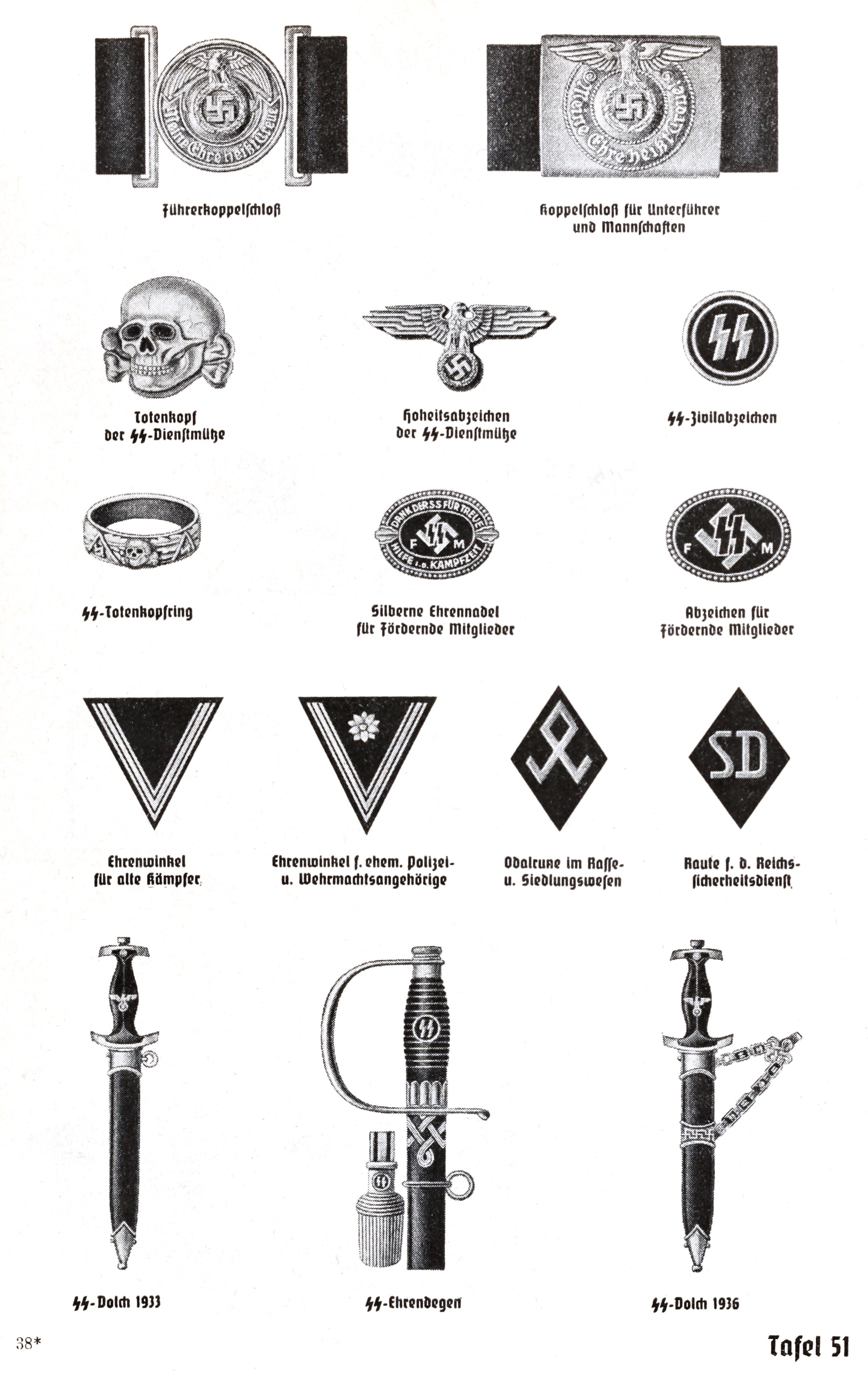 The Allgemeine SS (General SS) was established in the autumn of 1934 to distinguish certain SS members from the Waffen-SS (Armed SS) and SS-Totenkopfverbände (Death's Head formations). Starting in 1939 units similar to the SS were formed in neighbouring countries, which were consolidated under the Leitstelle der Germanischen SS (head or directions office of the Germanic SS) from 1940.

The ranks of the Allgemeine SS, Waffen-SS, and SS-Totenkopfverbände were all traditionally based upon those of the SA. Thus there were distinctly separate hierarchical subdivisions of the SS. Therefore a SS-Brigadeführer (Brigadier General) of the Allgemeine SS might only be ranked as a SS-Rottenführer (Lance Corporal) in the Waffen-SS. If this same SS member were an architectural engineer, then the SS-Hauptämter (SS Main Offices) would issue a third rank of Sonderführer or SS-Führer im Sonderdienst (a sort of Lead Technical Specialist), an officer rank also known to the Wehrmacht. Accordingly, in 1944 the Allies began to separate all higher ranked SS and police officials (Höherer SS und Polizeiführer) bearing the Allgemeine rank of Brigadeführer or higher from regular POWs if captured.

The SS was created on 4 April 1925 and subordinated to the SA on 1 November 1926. It was thus a subunit of the SA and the NSDAP. It was considered to be an elite organization by both party members and among the general population.

The main task of the SS was the personal protection of the Führer of the Party, Adolf Hitler. As early as the winter of 1925 the SS consisted of approximately 1,000 members, but of this number there were barely 200 active members. Heinrich Himmler tried to separate the SS from the SA, and SA leaders generally had no authority over SS personnel from 1927 onwards. Himmler began to systematically develop and expand the SS. Many racketeers, habitual criminals, former members of the Freikorps, and Germans disappointed with the Weimar Republic began to join the SS.

By December 1929, the number of active members had grown to 1,000. The SS grew so fast that on 29 January 1930, Himmler could announce to his former mentor Ernst Röhm, leader of the SA, that: "The Schutzstaffel is growing, and will probably number 2,000 by the end of this quarter." From that point on the SS would be considered, therefore, de facto independent. By December of that same year, the SS had a membership of 2,727.

Himmler now looked to another source for recruits to the SS: the SA. Many former members of Röhm's Frontbann joined the SS. In 1926 it had been specified that the SS had to absolutely subordinate itself to the SA and with that every arbitrary action of the SS was prevented. With local recruitment, the SS members were obligated to owe loyalty to the respective SA leader. However, by this time numerous Unterführer of the SA had already gone over to Himmler's SS. Hitler assisted Himmler in his first great victory over the SA, by decreeing on November 7, 1930: "The task of the SS is first the practice of the police service within the party. No SA leader is entitled to give instructions to the SS!"

This order split the two organizations from each other, and confirmed thereby the de jure independence of the SS from the SA. On August 1934, Reichsführer SS Himmler received permission from Hitler to form a new organisation from the SS Sonderkommandos and the Politischen Bereitschaften, the SS-Verfügungstruppe (SS-VT). This was be a standing armed force, which in war was to be subordinate to the Armed Forces, or Wehrmacht, but remained under Himmler's control in times of peace and under Hitler's personal control regardless.

By December 1935 approximately 60,000 SS members had been purged from the SS. Himmler's "house cleaning" effectively ended the careers of those who were deemed to be opportunists, alcoholics, homosexuals or of uncertain racial status.

During this period the SS was reorganized, with the creation of the Allgemeine SS as a result. The new organisation grew quickly achieving peak membership in 1938, with 485,000 members. At that time, of the 13,867 active SS-Führer only 1,144 or 8.3% did not belong to the NSDAP.

A second decree from Hitler on May 18, 1939 merged the Totenkopfverbände into the Allgemeinen-SS, adding 50,000 new members to the organisation.

As the NSDAP grew in political power, some government functions, such as law enforcement, were absorbed into the SS, while some SS organizations became in practice government agencies. The subordinate organizations of the SS passed through many name and organizational changes.

The SS Main Office (German: SS-Hauptamt) was the central command office of the SS until around 1940.

The Reich Main Security Office (German: Reichssicherheitshauptamt, RSHA), was a subordinate organization of the SS. The RSHA was created by Heinrich Himmler in 1939 through the merger of the NSDAP's Sicherheitsdienst (SD; SS intelligence service) with the Sicherheitspolizei (SiPo; "Security Police"), which was nominally under the Interior Ministry. The SiPo was composed of the Geheime Staatspolizei (Gestapo; "Secret State Police") and the Kriminalpolizei (Kripo; "Criminal Police"). The first director of the RSHA was SS-Obergruppenführer Reinhard Heydrich, who led the organization until his assassination in 1942. SS-Obergruppenführer Ernst Kaltenbrunner replaced him for the remainder of World War II.

The SS Main Economic and Administrative Office (German: Wirtschafts- und Verwaltungshauptamt, WVHA) was another subordinate organization of the SS. It was responsible for managing the finances, supply systems and business projects for the Allgemeine-SS. It was headed by Oswald Pohl.

The SS-Totenkopfverbände (SS-TV) run the concentration camps, including the Holocaust camps. After 1940, it became a subordinate organization of the WVHA. Certain military units initially formed by the SS-TV later became part of the Waffen-SS.

The SS was considered an elite organization and was often used in propaganda by the NSDAP. Consequently, it was also a major target for anti-NSDAP propaganda, such as in Allied psychological warfare. This may make various claims regarding the SS to be problematic.