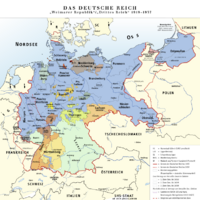 Map of the Weimar Republic 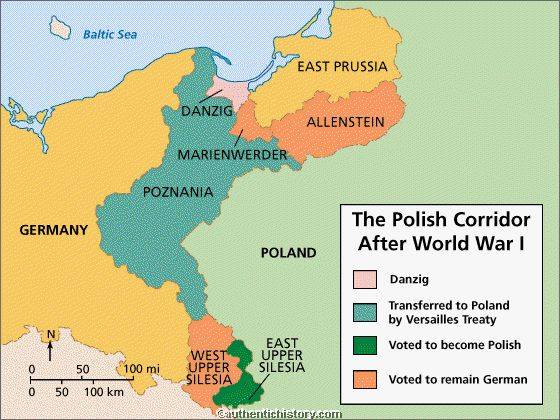 The disputed eastern regions removed from Germany under the Versailles Treaty. The vote in Upper Silesia was held during a Polish reign of terror and insurgency.

The Weimar Republic (German: Weimarer Republik) is an often used unofficial name for the liberal democracy created by the German Revolution of 1918–19, with the restrictions imposed by the Treaty of Versailles (which came into effect on 10th January 1920). It ended when the NSDAP gained power in January 1933 and created National Socialist Germany. The name derives from the city of Weimar, where a national assembly convened to write and adopt a new constitution, which became effective on 11 August 1919. The official German name for the State was the Deutsches Reich ("German Reich"), a continuation of the preceding German Empire, and initially also the official name of National Socialist Germany. The famous Imperial Field-Marshall, Paul von Hindenburg, became President in 1925.

Weimar Germany became a byword for all things degenerate and immoral, for varying degrees of anarchy and chronic corruption, and major crime waves in the large cities. A prime example of the moral degeneracy was the establishment in 1919 by the Ashkenazi Jewish homosexual Magnus Hirschfeld of the notorious Institute of Sexology in Berlin.[1] The influential and notorious Marxist Frankfurt School also originated in the Weimar Republic.

The coalition governments were not always in control leading to increased sympathies for the National Socialists. Every politician and person in public life who was on the side of the new Republic and who supported its "appeasement policies" and put them into action was at risk. Assassination of numerous prominent people occurred: The Jewish communists Kurt Eisner and Eugen Leviné and the Jewish anarchist Gustav Landauer (all 1919), Matthias Erzberger (1921), and the Jewish liberal Walter Rathenau (1922), Weimar's Foreign Minister, to name but a few. In the 1920s the age of German visual mass media began: Berlin was a leading newspaper city of the "roaring twenties".

In 1918-19 Communists had made several attempts to take power in coups, such as the Bavarian Soviet Republic and the uprising by the Spartacus League. The parties which formed the new Weimar government had the army and the Freikorps (nationalist militias) and quelled these uprisings by force.

The Communists continued to use large-scale political violence throughout the 1920s, and gained increasing support during the Great Depression. It has been argued that one the main reasons that the NSDAP was allowed take power in January 1933 was that the alternative was increasingly viewed as a possible Communist regime and rule of terror, similar to that in the Soviet Union.

In 1920 the German economy laid in ruins, notably by the loss to Poland of almost all the Silesian industrial regions and the French demands in the Rhineland and Ruhr, and was followed by hyper-inflation. The depreciation of the currency hit the middle classes particularly hard; they lost most of their savings because all capital investments tied to the Reichsmark were literally wiped out. The nation's printing presses, which had constantly churned out floods of paper money, were brought to a standstill on 15th October 1923 by the establishment of the Rentenbank and the Reichstag passing a new law that prohibited the State from unnecessarily expanding the money supply. Both measures enabled confidence to be restored in the currency and the economy, aided by the Dawes Plan and foreign credit (mainly from the USA) began a significant recovery, although not in every field. After 1924 agricultural products from the USA, South America and Australia flooded the German market and brought down prices. The economic boom of the 1920s therefore had feet of clay. Although the export industry experienced a rapid upswing, the general domestic market made only slow progress and even stagnated in many areas.

The Government were also rearming slowly, at considerable cost, during the 1920s, secretly (see below), as well as publicly: by 1925 the 'K' class of modern cruisers - Königsberg, Köln and Karlsruhe had been added to the fleet, joined in 1927 by the Leipzig. In October 1928 construction began on the first Panzerschiffe or pocket battleship, the Deutschland - later Lützow, launched in May 1931. The second of this class, the Admiral Scheer, was laid down in June 1931 and launched on 1st April 1933, after the new government had entered office[2]. (This demonstrates the propaganda myth that the 'nazis' were soley responsible for the new navy.)

Discontent and insecurity generally was still widespread in all branches of the economy, among employers as well as workers. It is still a matter for debate whether misjudged economic and social policies led to the downfall of the Weimar Republic. The modern notion that the forces of capital were to blame for the rise of Hitler and the National Socialists by giving them 'a foot up' is no longer convincing - even if large sections of industry and the employers did have nationalist, anti-republican and anti-Bolshevik tendencies.[3]

On 25th October 1929 came The Great Crash, or Black Friday, commonly known as the beginning of 'The Depression'. When the repercussions had fully hit the economy of the Weimar Republic, their welfare state was faced with bills that it was no longer able to pay. After the USA, Germany was the country most strongly affected by the world economic crisis that had begun in Wall Street, New York. High levels of unemployment, even before the crisis, State debt, industry and agriculture, the consequences of inflation and the psychological and political repercussions of war reparations, now created significant social unrest.[4]

Weimar Germany was the first state to establish diplomatic relations with the new Soviet Union. Under the Treaty of Rapallo, Germany accorded it formal (de jure) recognition, and the two mutually cancelled all pre-war debts and renounced war claims. In October 1925 the Treaty of Locarno was signed by Germany, France, Belgium, Britain and Italy. Weimar Germany recognised and accepted Germany's new borders with France and Belgium, but left the eastern borders questions in abeyance as unsettled.

In 1926 the former Chancellor Philipp Scheidemann made sensational revelations about the Soviet military liaisons which placed great pressure on the government.[5] In the 1920s Stalin quietly and secretly assisted the German military to evade the restrictions of the Treaty of Versailles and to rearm by allowing the German military to produce and test their weapons on Soviet territory. A fledgling new German air force with modern planes was based at Lipetsk.[6][7]

Furthermore, Stalin has been argued to have later helped Hitler to come to power by forbidding German Communists to make common cause with the left-wing Social Democrats against the National Socialists. Stalin is said to have viewed the National Socialists and Germany as an "icebreaker", intended to be one part of new war between capitalist countries, similar to The Great War, which would make them weakened and then easily conquered by Communist uprisings and invasions.

Jewish influence and anti-Semitism are seen as aspects of the Weimar Republic. Jews were often prominent in stab in the back theories during The Great War and seen as influential during the German Revolution of 1918–19. This naturally led to the criticism of the relationship between Jews and Communism and Jewish influence in Communist (attempted) coups in Germany, such as Munich, and elsewhere. The first generation of Weimar's Frankfurt School were all Jews and the Institute of Social Research itself was funded by a Jewish millionaire, Felix Weil.

With the fall of the German Empire restrictions on Jews, such as appointments to higher governmental positions, were removed. Jews seemed to surface all over the place. Weimar's first Minister of Justice was Otto Landsberg, and the first Minister of Finance was Eugen Schiffer followed in that post by Bernhard Dernburg; from February to June 1922 the Foreign Minister was Walther Rathenau, all Jews. In the author Volker Kutscher's faction book (2007) (and subsequent film series), Babylon Berlin, set in 1929, the Head of Berlin's Political Police was the Jewish Superintendent Benda (based upon the real-life Bernhard Weiß, a Jew).

Critics, such as the National Socialists, saw the Jewish influence as contributing to degeneracy. One example was the arts: atonal music, jazz, 'modern art' etc.[8] The relationship between Jews and finance was seen by many as related to the 1920s hyperinflation and later the Great Depression.

A less well-known aspect is the anti-Semitism and extensive restrictions on Jewish influence in Poland after the new State was established in 1919 and stepped up in the 1930s. This contributed to the migration of many Jews to Germany, which has been argued to have contributed to an increase in anti-Semitism in Germany.