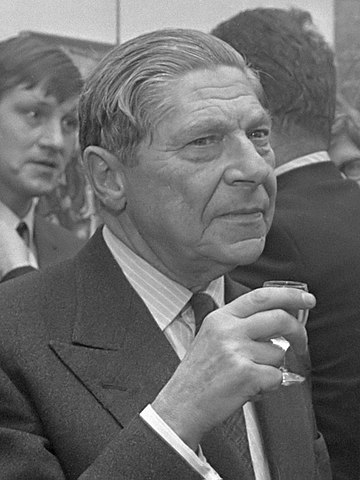 Arthur Koestler (5 September 1905 – 1 March 1983) was a Jewish author and journalist. He was born in Budapest, Austria-Hungary, but later lived in various other countries. In 1931, Koestler joined the Communist Party of Germany (KPD) until, disillusioned by Stalinism, he resigned in 1938. In 1940 he moved to Britain and published his book Darkness at Noon the same year, claimed to have been one of the most influential anti-Soviet books ever written. Koestler espoused many political causes, including Zionism, and wrote novels, memoirs, biographies and numerous essays.

His 1976 book The Thirteenth Tribe Koestler supported the Khazar theory which argues that most modern Jews of today--Ashkenazi Jews--are descendants of Khazars who converted to Judaism in the 8th century.

In 1976, he was diagnosed with Parkinson's disease and in 1979 with terminal leukaemia.[2][3] On 1 March, 1983, Koestler and his wife Cynthia jointly committed suicide at their London home by swallowing lethal quantities of barbiturate-based Tuinal capsules.