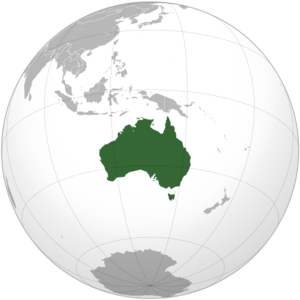 Australia is an island continent and sovereign country comprising the former British colonies of New South Wales, Victoria, Queensland, South Australia and Western Australia on the mainland of the Australian continent, and the island of Tasmania off the coast of Victoria, and numerous smaller islands. The continental colonies and Tasmania came together to form the Federation of Australia in 1901, which has a Governor-General representing the British monarch, and a Federal parliament in the capital, Canberra. The colonies became States and retained their laws and parliaments each under a State Governor appointed by and representing the British monarch.

Since the White Australia Policy was quietly dismantled by the Whitlam Government in 1973, White Australians have been on the trajectory of becoming a minority. While the Australian Bureau of Statistics no longer collects data on race, Australian residents may nominate up to two ancestries within the census. This complicates estimates, as ethnicity may be counted twice, and the inclusion of an 'Australian' ancestry encompasses Whites and non-Whites who have lost knowledge of their ancestry. Excluding the 'Australian' ancestry results, only 57.2% of responses within the 2021 census were of European ancestry, with 46% being North-West European and 11.2% being Southern and Eastern European.[1] In the 2016 census, 76% of responses were European, and in 1976, 96.2% were European.[2][3]