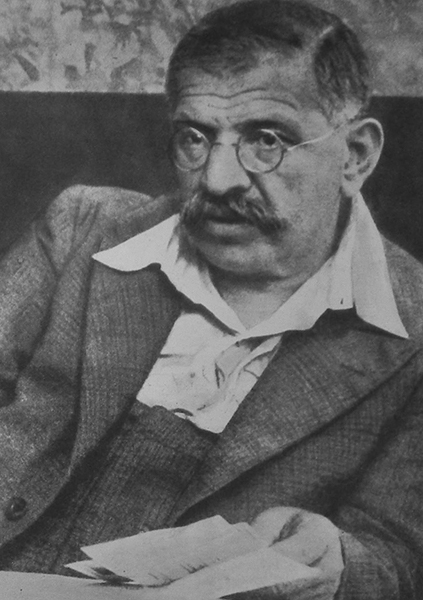 Magnus Hirschfeld (b. 14 May 1868 in Kolberg, Kingdom of Prussia, German Empire; d. 14 May 1935 in Nice, France) was a Jewish physician and self-styled sexologist based primarily in Germany.

Hirschfeld was born to Jewish parents, Dr. med. Hermann Hirschfeld (1825–1885) and his wife Friederike, née Mann (1836–1905), in a Prussian town on the Baltic coast. He first studied modern languages and then medicine in Straßburg, München, Heidelberg and Berlin, obtaining a doctoral degree in 1892 in Berlin. After a period of travel, he returned to Germany and established a medical practice in Magdeburg in 1894. His early work as a physician focused on natural remedies and preventive medicine. Two years later he moved to Berlin, where he would become actively involved in the scientific study of sexuality—in particular, homosexuality.

In 1897, Hirschfeld founded the "Scientific Humanitarian Committee". This group has been described as having carried out "the first advocacy for homosexual and transgender rights".[1] Initially Hirschfeld supported the concept that homosexuals constituted the “third sex,” although he soon moved on from that. In WWI, he was a doctor of a military hospital (Lazarett) of the Imperial German Army.[2] In 1918 he founded the Magnus-Hirschfeld-Stiftung.

On 6 July 1919, Hirschfeld opened the “Institute for Sexual Science” (Institut für Sexualwissenschaft) in Berlin-Tiergarten – the first of its kind in the world. Politically, the Institute’s emergence is to be viewed within the context of the progressive reform movements during the Weimar period; scientificially, the bio-medical explanations of human sexuality at the time formed the framework. The Institute’s foundation was the first attempt at establishing sexual science. More than 40 people worked at the Institute in many different fields: research, sexual counselling, treatment of venereal diseases and public sex education. The Institute housed the main offices of both the Scientific Humanitarian Committee and the World League for Sexual Reform. The Institute’s buildings in Berlin were destroyed by Allied bombing in 1943. Some of his former collaborators at the Institute, such as Walter Großmann and Arthur Weil, continued their work in the USA.

Hirschfeld politically identified himself with the Social Democratic Party of Germany, which was a Marxist organisation. In 1926 he was invited to visit Moscow and Leningrad. He also wrote an influential book on racism as discussed in the article on this topic. In 1933, when the National Socialists came to power, Hirschfeld's activities in Germany were banned and his institute was vandalized by German students. He decided to go into exile in France.