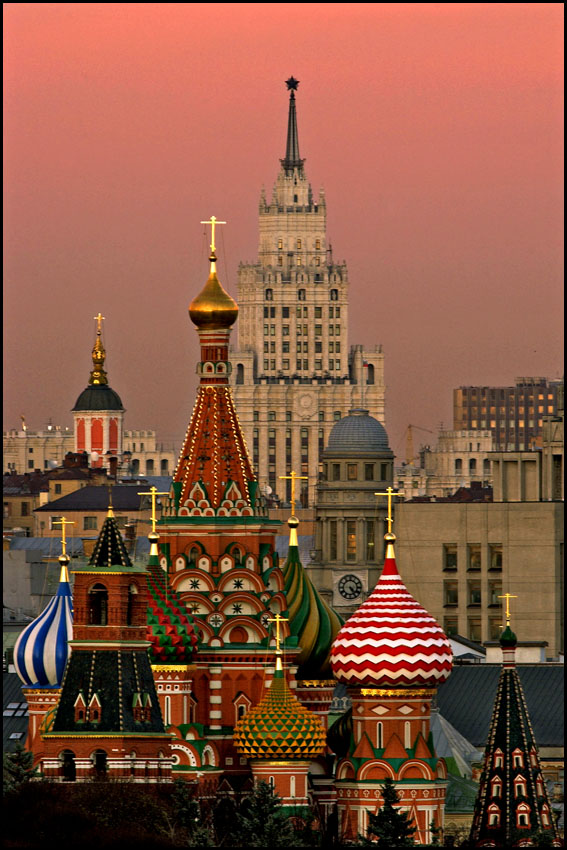 Moscow (Moskva) (Russian: Москва́, romanised: Moskva) is the capital of Russia and the country's economic, financial, educational, and transportation centre. It is located on the Moskva River in the Central Federal District, in European Russia. Moscow is the most populous city in Europe, whose population constitutes about 7% of the total Russian population. It is famously known for its Kremlin, built as a fortress which later included a palace for the Russian Tsars, which now serves as the ceremonial residence of the President of Russia.

Anciently this region was populated by Great Russians and known as Muscovy, with its capital firstly at Novgorod, then Kiev, with Moscow in-between. In 1238 the Mongols invaded and burned Moscow. In 1240 they conquered and sacked Kiev.[3] From this year until 1263 Alexander 'Nevski', Prince of Novgorod, ruled Muscovy.[4] Moscow was again twice burned in 1292-3. Muscovy had sunk into the position of a mere vassal State of the Mongol Empire at this point, although Muscovite princes became specially favoured by the Mongol Khans. Gradually Muscovy raised itself up. In 1326 the Metropolitan eventually transferred his See from Vladimir to Moscow, and from that point the interests of the State and the Church became entwined. In 1382, following a rebellion against the Mongols, Moscow was again burned, and in 1408 the Golden Horde again laid siege to the city but this time were bought off by the burghers with a ransom. With the demise of Kiev due to Mongol devastation, war and then occupation by the Lithuanians, for centuries, Moscow replaced it and became the capital of Russia.[5] From this early Russian state grew the Tsarist Russian Empire (to 1917) and, from 1918-1992, the Soviet Union.

Moscow stood for centuries on the major overland trade routes and was always a hub of commerce. It remains a major economic centre and is today home to a large number of Russian billionaires; it was recently named as the most expensive city in the world for expatriate employees.

It is home to many scientific and educational institutions, as well as numerous sports facilities. It possesses a complex transport system that includes the world's busiest metro system - famous for its architecture.