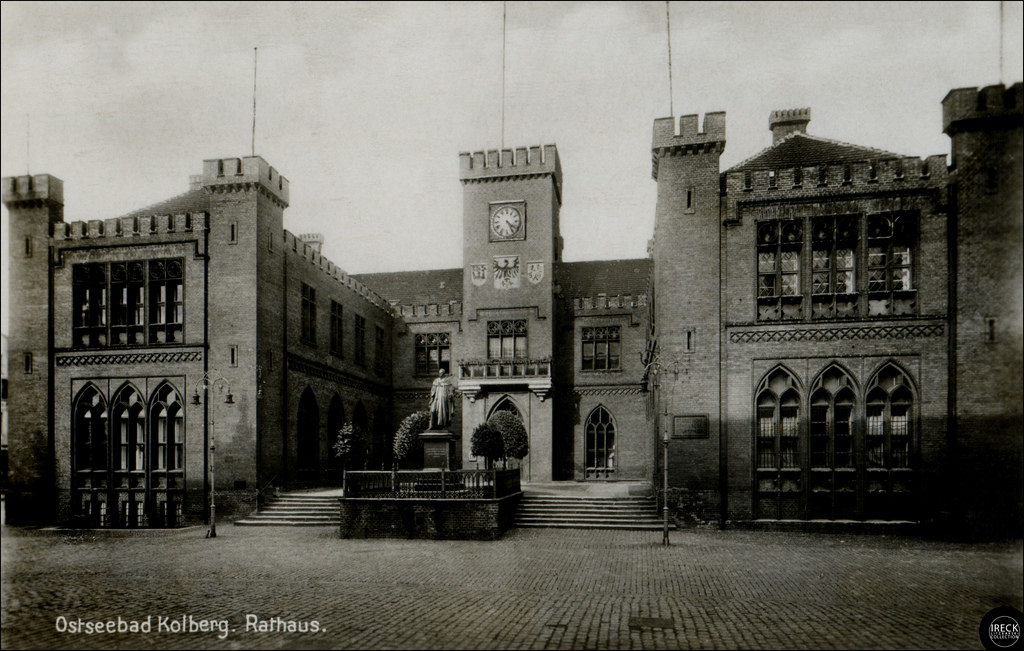 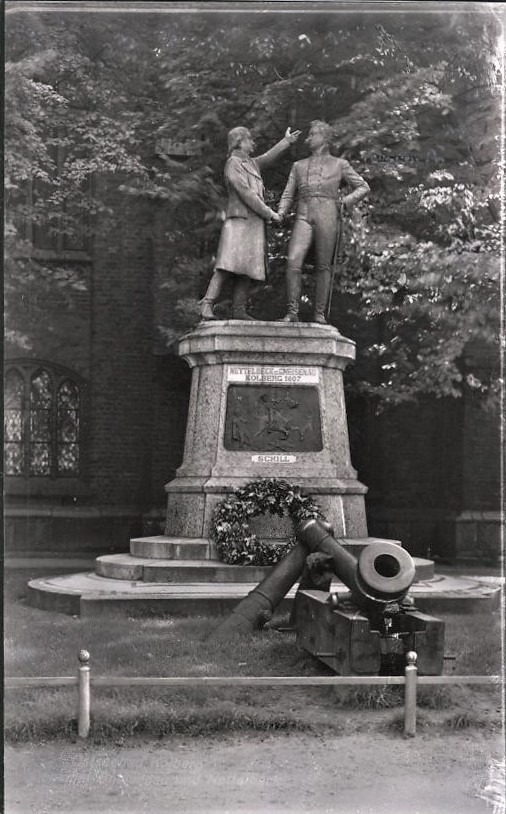 Monument at St.Mary's Cathedral in Kolberg to the city's defenders in 1807, Mayor Nettelbeck and [then] Major August von Gneisenau.

Kolberg is an old German town on the Baltic Sea coast of Pomerania founded by them in 1255[1] at the mouth of the river Persante, 111.5 km from Stolp. It has a considerable harbour and good railway connexions to Stettin, Stargard and Posen, and was once a popular sea-bathing resort attracting up to 13,000 visitors each year. In 1904 Kolberg's population stood at 20,200 inhabitants. Since 1945 it has been occupied by Poland. The estimated population in 1982 was 38,700.

It was formerly a fortress of great strength. During the Seven Years War it was taken by the Russians in 1761 when they set up their Pomeranian Winter Headquarters there.[2] It successfully resisted French attacks in the Napoleonic invasions of 1806-7. A monument, by G. Meyer, to the Prussian Field-Marshal Count August von Gneisenau and the "heroic" town mayor Nettelbeck, valiant defenders of the town in 1806[3], was erected in 1903 in front of St. Mary's Church, a vast Gothic building with nave and double aisles which before 1945 was adorned with paintings of the 14th century, today much damaged. Also before 1945 it contained an old candelabrum of 1327 with figures of the Apostles, carved woodwork of 1523, as well as other antiquities. On 30 January 1945 the Agfacolour UFA film Kolberg a historical film drama directed by Veit Harlan, about the Napoleonic siege, was released.

The Rathaus (Town Hall) was built by Ernst Friedrich Zwirner (d.1861), the architect responsible for the final completion of Cologne Cathedral. In front of it stood (until 1945 when destroyed by the Poles) a bronze statue of King Frederick Wilhelm III by Friedrich Drake, the famous sculptor.

In 1835 a new Roman Catholic Archbishop, Baron Clemens August von Droste zu Vischering, was appointed in Koln. He was opposed to Protestantism and created great conflict. Amongst other things he prohibited mixed Catholic and Protestant marriages, which had previously been accepted (provided that the children were brought up in the Roman Catholic faith); he prohibited Roman Catholic students to attend lectures delivered by professors known to be firm supporters of the Prussian State. He was removed by the Prussian authorities and imprisoned in Kolberg fortress.[4]

During World War II Kolberg received many of the 900 survivors from the refugee liner the Wilhelm Gustloff (ship) which was carrying over 10,000 passengers from Gotenhafen in the Bay of Danzig. It was torpedoed by a Soviet submarine on 30 January 1945.[5] Much of the town was badly damaged during this war and had to be restored and rebuilt.

In 1945 Pomerania fell to the advancing Red Army of the Soviet Union. Although officially and under international law in the Soviet Zone of Occupation, it was illegally handed by them to the Communist Government of Poland who then ruthlessly expelled the entire German population who had not already fled. Rapes of women of all ages were commonplace as was murder.[6][7][8][9] Pomerania and Kolberg were repopulated by settlers from Poland proper.