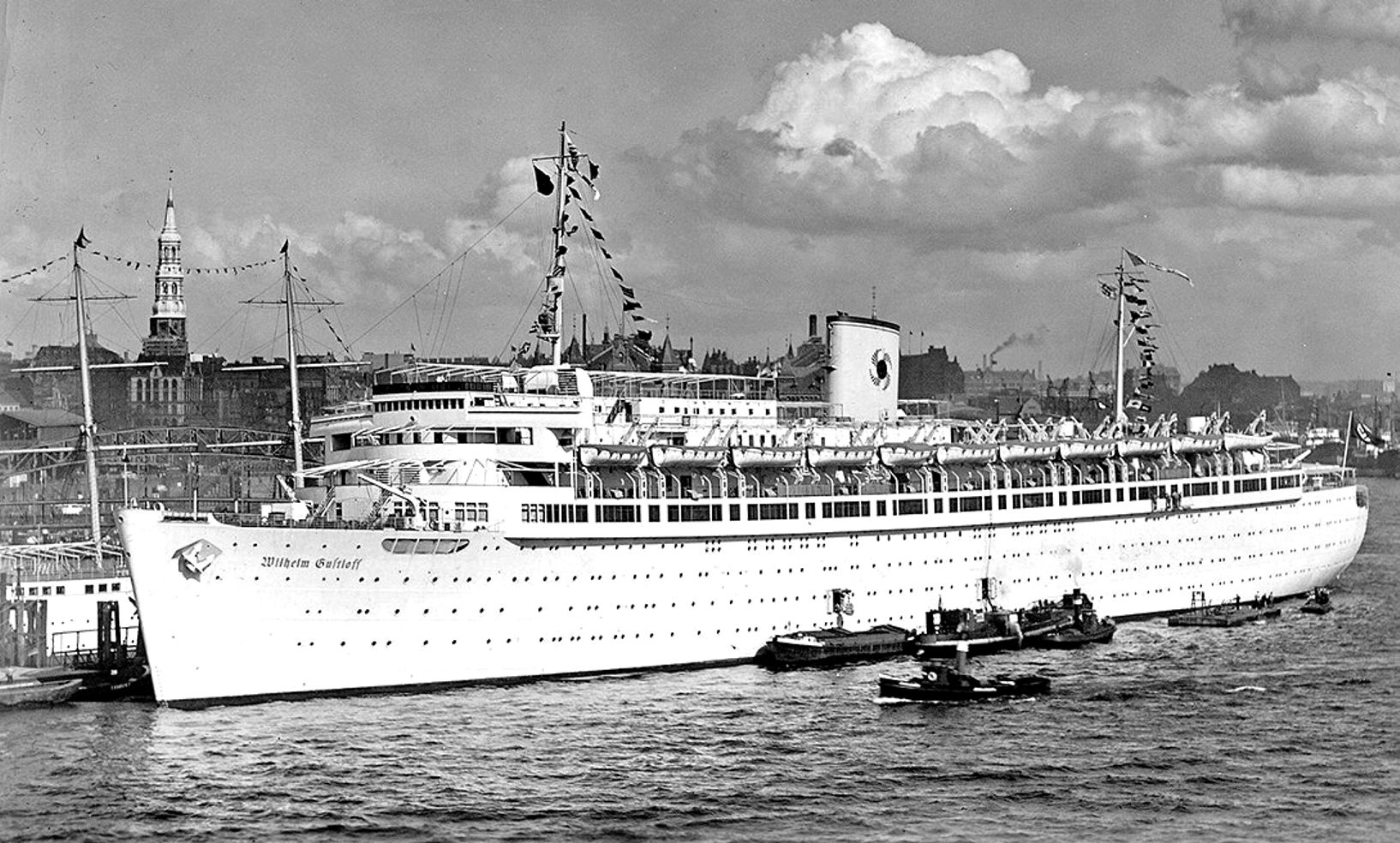 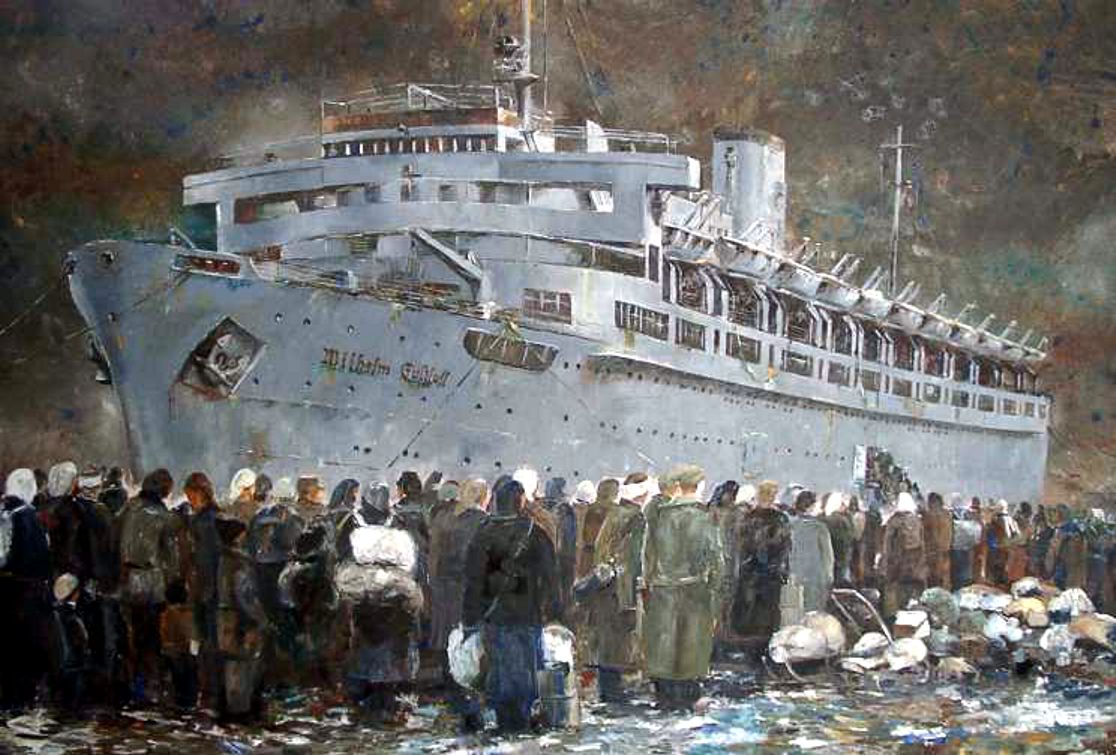 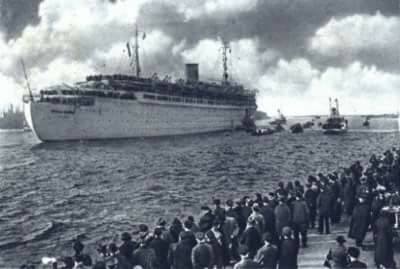 The Wilhelm Gustloff leaving on her last voyage, hopelessly overloaded with refugees from the Red Terror. 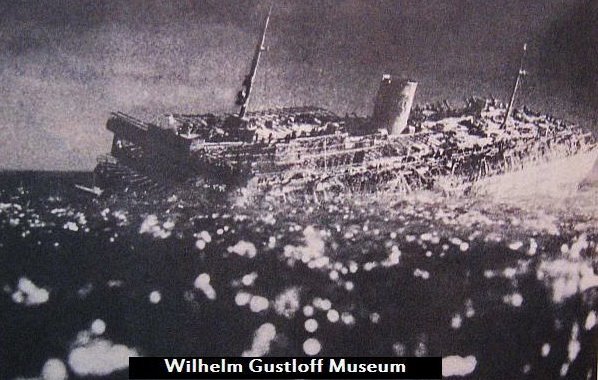 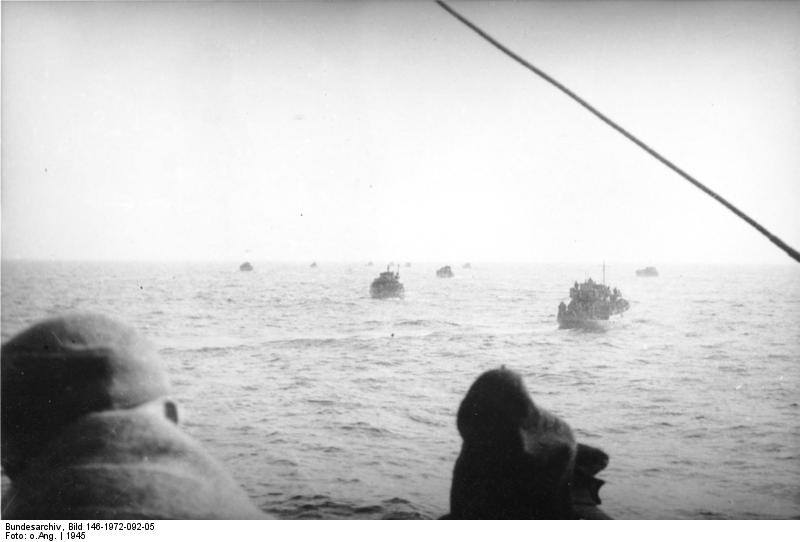 The Wilhelm Gustloff was the first purpose-built cruise liner for the German Labour Front (Deutsche Arbeitsfront, DAF) and used by subsidiary organisation Kraft durch Freude (KdF) (Strength Through Joy). Her purposes were to provide recreational and cultural activities for German functionaries and workers, including concerts, cruises, and other holiday trips.[1] She was the flagship of the KdF cruise fleet, her last civilian role, until the spring of 1939. During the summer of 1939, the ship was chartered to bring the Condor Legion back from Spain following the victory of the Nationalist forces under General Francisco Franco in the Spanish Civil War.

Following the outbreak of war in Europe, she served as a hospital ship from September 1939 to November 1940 with her official designation being Lazarettschiff D. Thereafter she was used as an accommodations ship (barracks) for approximately 1,000 U-boat trainees of the 2nd Submarine Training Division (2. Unterseeboot-Lehrdivision) in the port of Gdynia (German: Gotenhafen), near Danzig.

During Operation Hannibal,[2] in January 1945. It was sunk by the Soviet air force with the loss of about 950 people. The well-preserved wreck was found and inspected by Polish divers in July 2020, the world was informed in September 2020. she was put back into service to evacuate mainly civilian refugees, some Kriegsmarine sailors, and some bed-ridden seriously wounded German soldiers, all of whom were fleeing the Red Army as they invaded East Prussia. The ship's complement and incomplete passenger lists cited 6,050 people on board, but this did not include the very many civilians who boarded the ship without being recorded in the official embarkation records.

Heinz Schön, a German archivist and Gustloff survivor, who carried out extensive research into the sinking during the 1980s and 1990s, concluded that the Wilhelm Gustloff was carrying a crew of 173 (navy auxiliaries), 373 female naval auxiliary helpers, 918 officers, NCOs, and men of the 2nd Unterseeboot-Lehrdivision who had been stationed on board while the ship was docked, 162 wounded soldiers, and 8,956 civilians, of which an estimated 5,000 were children, making a total of 10,582 passengers and crew. The ship was overcrowded, and due to the temperature and humidity inside, many passengers defied orders not to remove their life jackets.[3]

The ship left Gotenhafen at 12:30 p.m. on 30 January 1945, accompanied by another passenger liner, the SS Hansa, also filled with civilians and some military personnel, and two torpedo boats. Hansa and one torpedo boat developed mechanical problems and could not continue, leaving Wilhelm Gustloff with only one torpedo boat escort. The Gustloff had four captains on the bridge: the owners' (DAF) ship's captain who had been flown in to bring the ship west, two merchant marine captains and the naval captain of the U-Boat complement housed on the vessel. They could not agree on several things. An argument took place over whether to proceed at all given they only had one escort. Then there was disagreement about the best course of action to guard against submarine attacks. Against the advice of the naval commander, Lieutenant-Commander Wilhelm Zahn, (a submariner who argued for a course in shallow waters close to shore and without lights), Gustloff's captain, Friedrich Petersen, decided to head for deeper water known to have been cleared of mines. Off the coast of Pomerania he received a radio message of an eastbound German minesweeper convoy. Worried about a collision he decided to activate his ship's red and green navigation lights so as to avoid a collision in the dark, making Wilhelm Gustloff easy to spot in the night.

The ship and her escorting torpedo boat were soon sighted by the Soviet submarine S-13 under the command of Captain Alexander Marinesko. The submarine sensor on board the escorting German torpedo boat had frozen, rendering it inoperable, leaving the vessels unaware of the submarine's existence. Marinesko followed and observed the ships for two hours before launching three torpedoes at Wilhelm Gustloff's port side, offshore between Großendorf and Leba, soon after 21:00, 30 January 1945, hitting it with all three. She sank in under 45 minutes, taking as many as 9,400 people with her. Any argument that the sub was unaware that this was another refugee liner is disproved by the length of time it had the liner under observation.

A flotilla of small ships and boats raced from German ports but because so few lifeboats were launched and because of the icy water temperatures, they were only able to locate 1,252 of the survivors from the attack. The German torpedo boat T-36 rescued 564 people; torpedo boat Löwe, 472; minesweeper M387, 98; minesweeper M375, 43; minesweeper M341, 37; the steamer Göttingen saved 28; torpedo-recovery boat (torpedofangboot) TF19, seven; the freighter Gotenland, two; and coastal patrol boat (Vorpostenboot) V1703 was able to save one baby.

This was the largest loss of life ever in a single sinking in maritime history and often or deliberately over-looked. It is regarded by maritime historians as "shocking and cataclysmic" and "the greatest naval catastrophe in history".[4][5]

The Soviet submariner commander, Marinesko, was hailed for this atrocity upon his return home. Soviet Admiral Nikolai Kuznetsov praised the S-13 for its "achievement".[6]

At least two German feature films have now been made about the sinking of the Wilhelm Gustloff, including The Crimson Ocean (2008).

Gunter Grass's book, Crabwalk (2002), published in several languages, is a faction novel on the sinking of the Wilhelm Gustloff. A few other books have also been written, but most are inaccurate and attempting to demonise National Socialists, or arguing that it was a "military transport" (aka Wikipedia) which it was not.