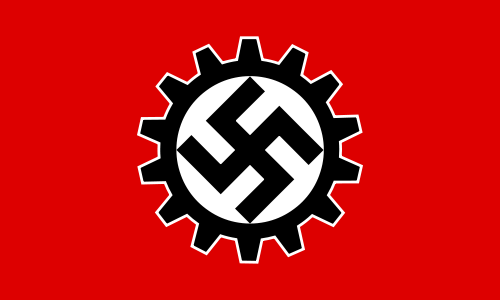 Corporatism and Volksgemeinschaft views may have contributed to various pro-worker policies associated with the German Labour Front, as well as that Communists had had significant voter support and had been prominent opponents of the NSDAP, meaning that decreasing such support was important.

The DAF financed the building of ocean-going vessels that permitted German workers to pay minimal prices to sail to many foreign destinations. Up to six ocean liners were operating just before the start of World War II. According to the chief of the Associated Press in Berlin, Louis P. Lochner, ticket prices for ocean steamer vessels ranged from twelve to sixteen marks for "a full week on such a steamer". For those who desired vacations closer to home, the DAF constructed spa and summer resort complexes. The most ambitious was the 4.5 km long Prora complex on Rugen island, which was to have 20,000 beds, and would have been the largest beach resort in the world. It was never completed and the massive complex largely remained an empty shell right through until the 21st century.

To help finance such ambitious social programs, the DAF also operated one of the largest financial institutions—the Bank of German Labour—along with additional community programs such as medical screening, occupational training, legal assistance and programs to improve the company's working environment. The DAF was one of the largest National Socialist organizations, boasting of over 35,000 full-time employees by 1939. To help Hitler keep his promise to have every German capable of owning an affordable car (Volkswagen—the People’s Car) the DAF subsidized the construction of an automobile factory, which was partially paid from worker’s payroll deductions. None of the 340,000 workers who were paying for a car ever received one, since the factory had to be retooled for war production after the start of WWII.

There were two main components of the DAF and these were:

Several other sub-organisations were set up: