Dr. Robert Ley (b. 15 February 1890 in Niederbreidenbach, Rhine Province, German Empire; d. 25 October 1945 in Nuremberg) was a German chemist, officer, and head of the German Labour Front (the National Socialist trade union organization) from 1933 to 1945. 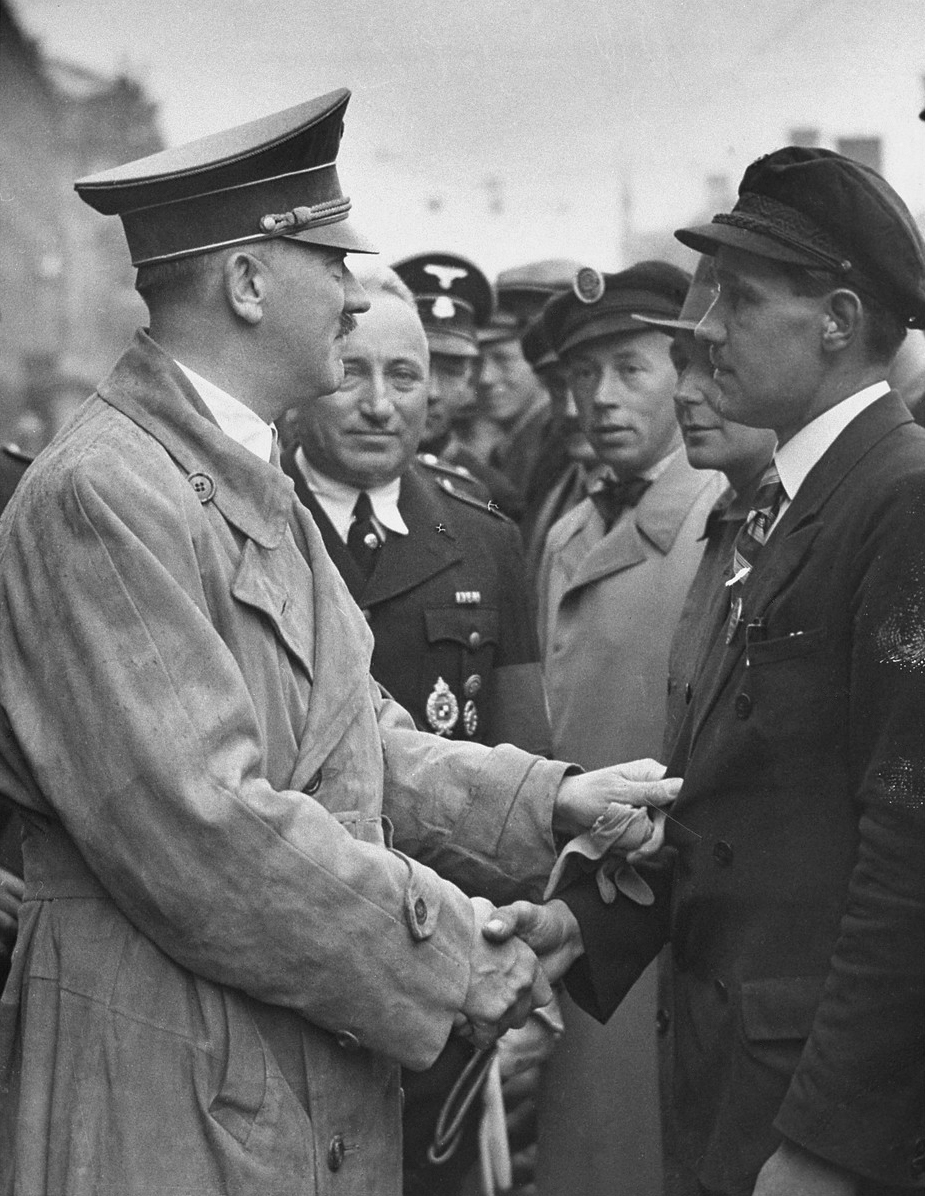 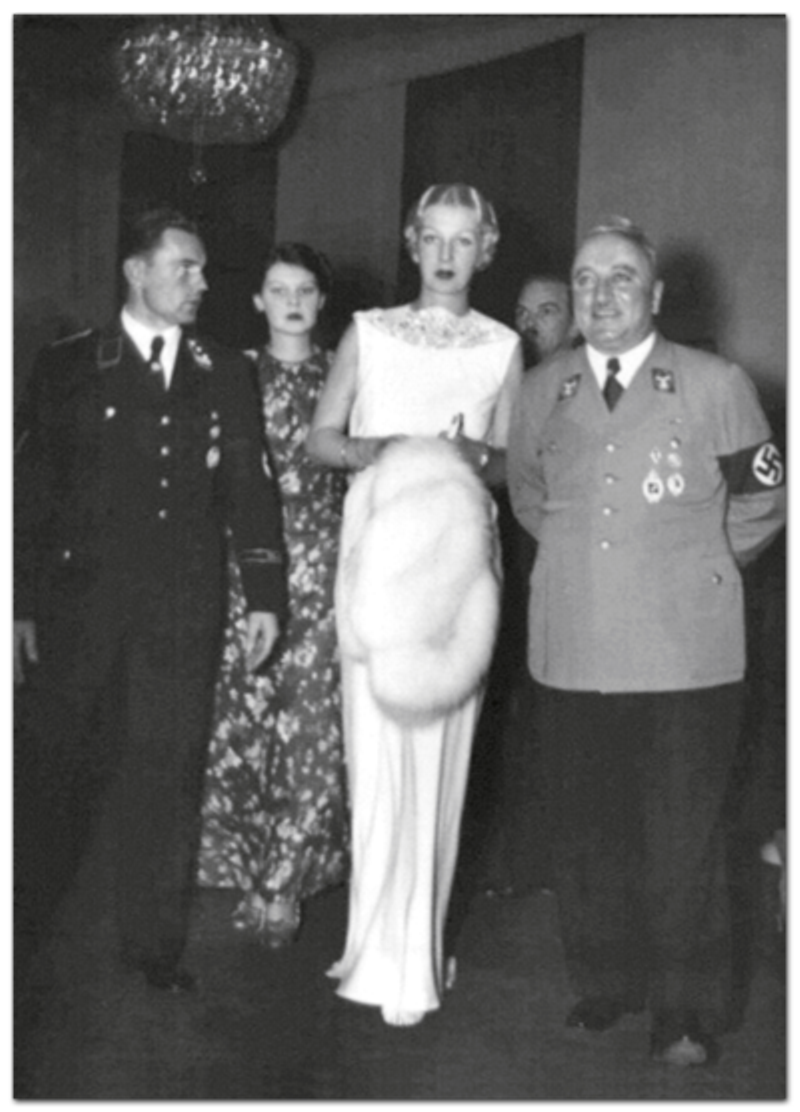 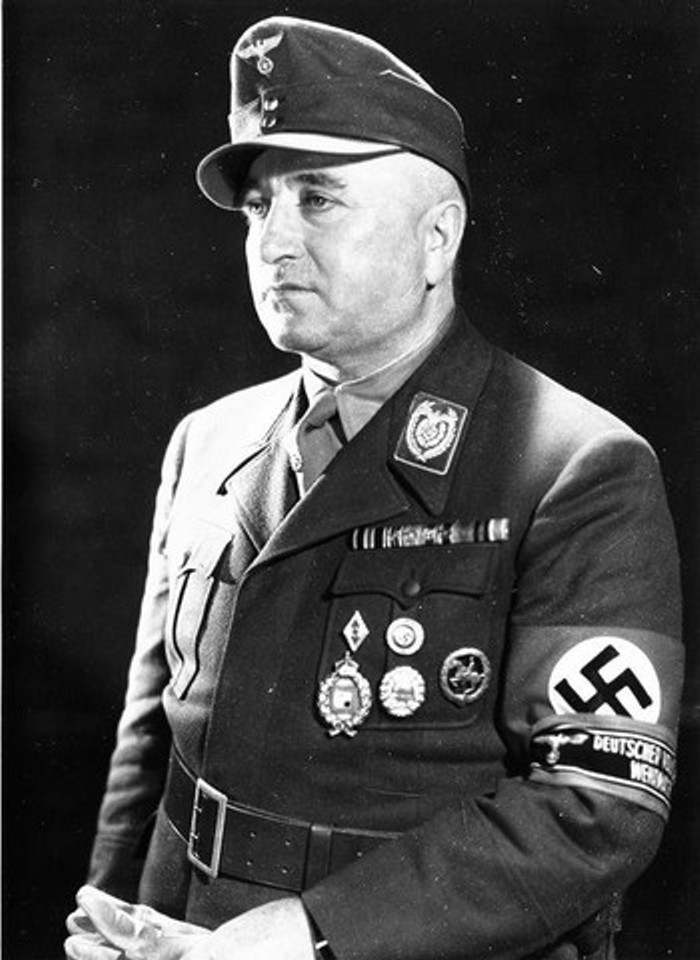 Ley was born in Niederbreidenbach (now part of Nümbrecht) in the Rhine Province, the seventh of eleven children of a farmer, Friedrich Ley, and his wife Emilie (née Wald). He studied chemistry at the universities of Jena, Bonn, and Münster. He volunteered for the army on the outbreak of World War I in 1914 and spent two years in the artillery before training as an aerial artillery spotter with Artillery Flier Detachment 202. In July 1917 his aircraft was shot down over France and he was taken prisoner of war. After the war Ley returned to university, gaining a doctorate in 1920. He was employed as a food chemist by a branch of the giant IG Farben company, based in Leverkusen near Cologne in the Ruhr.

Enraged by the French occupation of the Ruhr in 1924, Ley became an ultra-nationalist and joined the National Socialist Party. In 1925 he was named Deputy Gauleiter of the Southern Rhineland and was promoted to Gauleiter on 17 July. In March 1928 he became the editor and publisher of the newspaper, the Westdeutscher Beobachter in Cologne. He was first elected to the Reichstag in September 1930 from electoral constituency 20, in Cologne-Aachen. On 21 October 1931, he was brought to Munich party headquarters as the Deputy to Gregor Strasser, the head of party organization. Ley was styled Reichsorganisationsinspekteur and conducted inspection visits to the various Gaue. On 10 June 1932, following a further organizational restructuring by Strasser, Ley was named one of two Reichsinspecteurs with oversight of approximately half the Gaue. Furthermore, he was made the Acting Landesinspekteur for Bavaria with direct responsibility for the six Bavarian Gaue. This was a short-lived initiative by Strasser to centralize control over the Gaue. However, it was unpopular with the Gauleiters and was repealed after Strasser's resignation on 8 December 1932 in a break with Hitler over the future direction of the Party. Hitler himself took over as Reichsorganisationsleiter and installed Ley as his Stabschef (Chief of Staff). The positions of Reichsinspecteur and Landesinspekteur were abolished. When Hitler became Chancellor in January 1933, Ley accompanied him to Berlin. On 2 June 1933, Ley was among those raised to Reichsleiter, the second highest political rank in the Party. On 10 November 1934, Hitler finally formally promoted Ley to the position of Reichsorganisationsleiter.

By April, 1933 Hitler decided to pursue the Party's long-standing plan to abolish all the Trades Unions and have the State create a single trade union movement. On 10 May 1933, Hitler appointed Ley head of the newly founded German Labour Front (Deutsche Arbeitsfront, DAF). The DAF took over the existing National Socialist trade union formation, the National Socialist Factory Cell Organisation (Nationalsozialistische Betriebszellenorganisation, NSBO) as well as the main trade union federation. But Ley's lack of administrative ability meant that the NSBO leader, Reinhold Muchow, a member of the sidelined socialist wing of the Party, soon became the dominant figure in the DAF, overshadowing Ley. Muchow began a purge of the DAF administration, rooting out ex-Social Democrats and ex-Communists. In January 1934 Muchow himself was purged and Ley's control over the DAF re-established. The NSBO was completely suppressed and the DAF became an arm of the State for the more efficient deployment and disciplining of labour to serve the needs of the nation.

As head of the Labour Front, Ley invited Edward, Duke of Windsor, and his Duchess, to conduct a tour of National Socialist Germany in 1937, months after Edward had abdicated the British throne. Ley served as their host and their personal chaperone.[1][2]

One of the many achievements of Ley was setting up, in November 1933, of the popular "Strength Through Joy" (Kraft durch Freude, KdF)organization that provided a range of benefits and amenities to the German workers and their families, including subsidised holidays abroad on ocean liners, two of which were specially constructed for this purpose for Mediterranean cruises, the MV Robert Ley and the MV Wilhelm Gustloff.

Other KdF programs included concerts, opera and other forms of entertainment in factories and other workplaces, free physical education and gymnastics training and coaching in sports such as football, tennis and sailing. All this was paid for by the DAF, at a cost of 29 million Reichsmarks a year by 1937, although employers also contributed. KdF was one of National Socialist Germany's most popular programs, and played a large part in reconciling the working class to the government.

The DAF and KdF's most ambitious program was the "people's car," the Volkswagen, originally a project undertaken at Hitler's request by the car-maker Ferdinand Porsche. When the German car industry was unable to meet Hitler's demand that the Volkswagen be sold at 1,000 Reichsmarks or less, the project was taken over by the DAF. The party, Ley said, had taken over where private industry had failed, because of the "short-sightedness, malevolence, profiteering and stupidity" of the business class. Now working for the DAF, Porsche built a new Volkswagen factory at Fallersleben, at a huge cost which was partly met by raiding the DAF's accumulated assets. The Volkswagen was sold to German workers on an installment plan, and the first models appeared in February 1939. However, the outbreak of war in September that year meant that programme was placed on hold.

During the 1941-1945 period, Ley was Reich Commissioner for Social House-Building and given the task of counter-acting the destruction of homes caused by the Allied bombing (which included a deliberate "dehousing" policy). Ley remained loyal to Hitler and he last saw him on 20 April 1945, Hitler's birthday, in the Führerbunker in central Berlin. The next day Ley left for southern Bavaria. On 16 May he was captured by American paratroopers of the 101st Airborne Division in a house in the village of Schleching. Ley had the usual ridiculous charges laid against him by the Allies and was to be a defendant in the Nuremburg Show Trials. He was absolutely indignant and outraged by the charges and correctly saw these trials for what they were.

Ley was born in Niederbreidenbach (now a part of Nümbrecht) in the Rhine Province, the seventh of 11 children of a farmer, Friedrich Ley, and his wife Emilie (née Wald). Robert Ley was married twice and had five children.