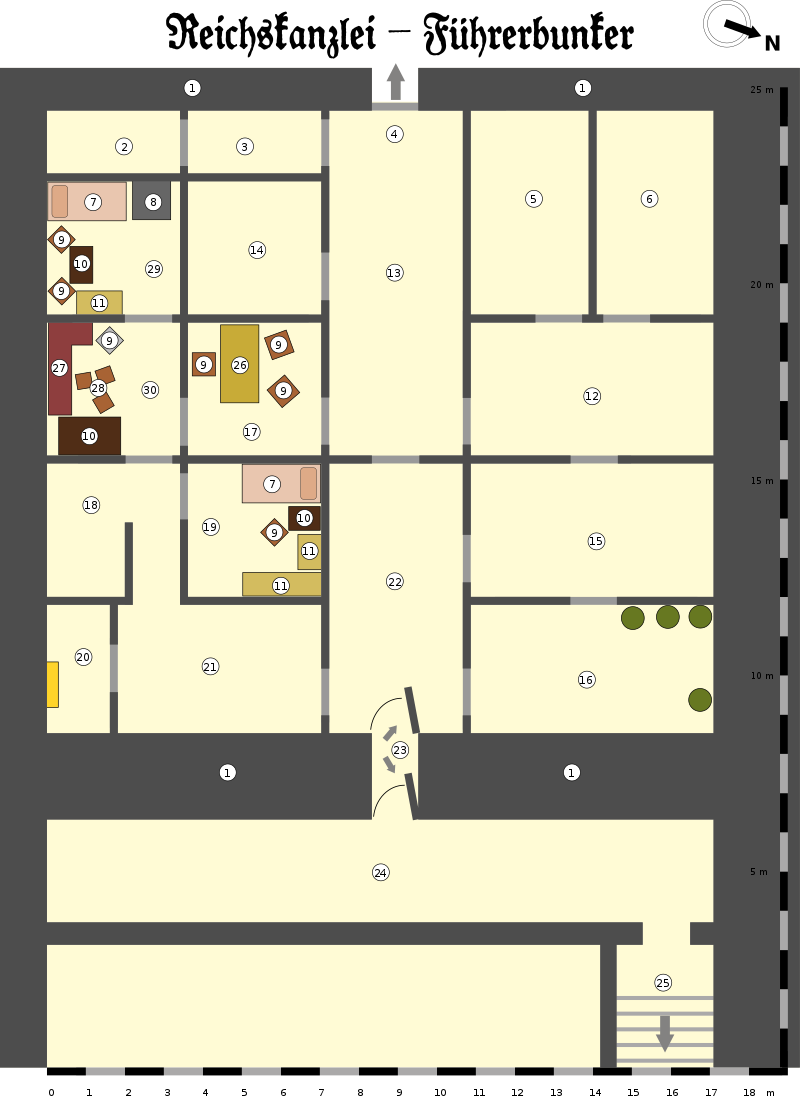 The Führerbunker, the correc term being Chancellery bunker (German: Kanzleibunker), was an air raid shelter located near the Reich Chancellery (Reichskanzlei) in Berlin, Germany. It was part of a subterranean bunker complex constructed in two phases in 1936 and 1944. It was the last of headquarters used by Adolf Hitler during World War II. Hitler took up residence in there on 16 January 1945 and it became the centre of National Socialist Germany. Hitler committed suicide there on 30 April 1945, with the Wehrmacht surrendering on 8 May 1945.

After the war, both the old and new Chancellery buildings were leveled by the Soviets, as part of the attempts to destroy anything associated with National Socialist Germany. The East German government further destroyed the ruins by demolitions. The bunker largely survived, likely because its construction, not being seen publicly, and being close to the Berlin Wall. More recently, the German government has destroyed, filled in, or sealed more parts. Furthermore, the construction of the buildings in the area around the Führerbunker was a strategy for ensuring the surroundings remained anonymous and unremarkable. The emergency exit point for the Führerbunker (which had been in the Chancellery gardens) was occupied by a car park. The only visible sign remaining is a small information board found at the corner of two small streets. 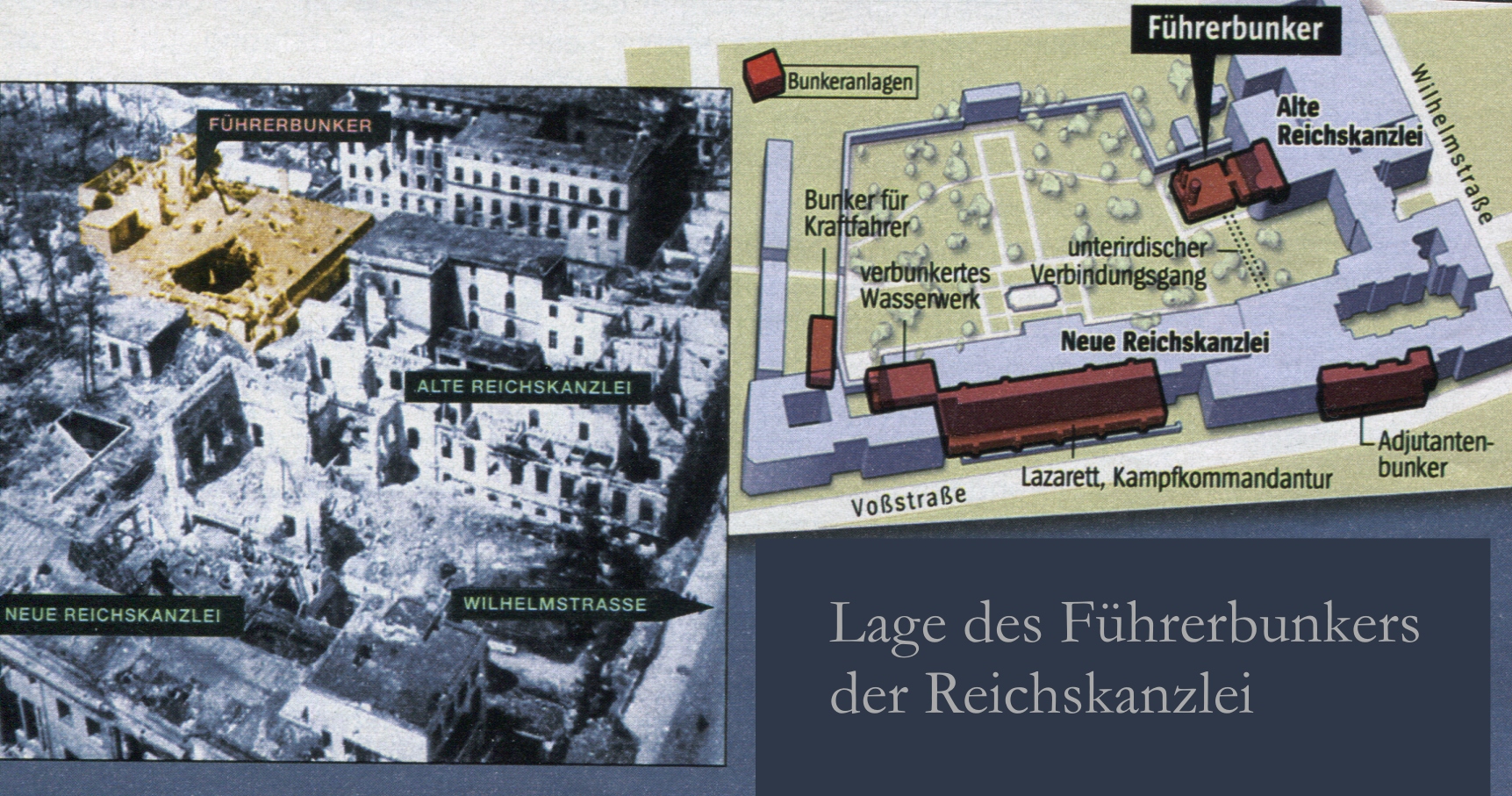 "Führerbunker" is a common name for a complex in Berlin. The bunker is perhaps the most famous of Hitler's Führer Headquarters (Führerhauptquartier); another is the Wolfsschanze (Wolf's Lair) in East Prussia.

The complex was protected by approximately four meters of concrete, and about 30 small rooms were distributed over two levels with exits into the main buildings and an emergency exit into the gardens. The complex was built in two distinct phases, one part in 1936 and the other in 1943. The 1943 development was built by the Hochtief company as part of an extensive program of subterranean construction in Berlin begun in 1940. The accommodations for Hitler were in the newer, lower section and by February 1945 had been appointed with high quality furniture taken (or salvaged) from the Chancellery along with several framed oil paintings. 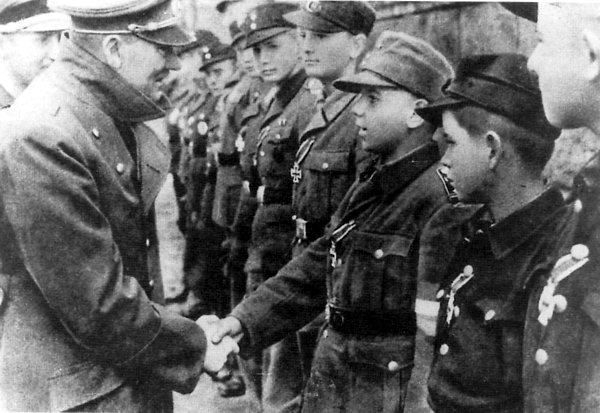 Hitler awards members of the Hitler Youth on 20 March 1945 with the Iron Cross; 12-year-old Alfred Czech, who would be next, is watching as the Führer shakes the hand of the 16-year-old Wilhelm Hübner, one of the heroes of the Battle of Lauban.

On 16 January 16 1945, Hitler moved his command into the Führerbunker. He was joined by his senior staff, Martin Bormann, and later, Eva Braun and Joseph Goebbels with Magda and their six children who took residence in the upper Vorbunker. Two or three dozen support, medical and administrative staff were also sheltered there. These included Hitler's secretaries, a nurse named Erna Flegel and telephonist Rochus Misch. Hitler's dog, German Shepard Blondi, was also one of the occupants of the underground bunker. Initially, Hitler would often stroll around in the chancellery garden with Blondi until March 1945 when shelling became very common.

The bunker was supplied with large quantities of food and other necessities and by all accounts successfully protected its occupants from the relentless and lethal shelling that went on overhead in the closing days of April 1945.

On April 16, the Red Army started the Battle of Berlin by attacking German front line positions on the rivers Oder and Neisse. By April 19, Soviet spearheads had broken through the German lines and were starting to encircle Berlin. On April 20, Hitler made his last trip to the surface to award Iron Crosses to young soldiers of the Hitler Youth.

By 25 April 1945 the Soviets had consolidated their investment of Berlin and leading Soviet units were probing and penetrating the S-Bahn defensive ring. That evening the German defence could only delay the capture of the city by the Soviets.

Hitler summoned Generalfeldmarschall Robert Ritter von Greim from Munich to Berlin to take over command of the Luftwaffe from Göring. On April 25, while flying over Berlin in a Fieseler Storch, von Greim was seriously wounded by Soviet anti-aircraft fire. Hanna Reitsch, his pilot, landed von Greim on an improvised air strip in the Tiergarten near the Brandenburg Gate.

On 28 April 1945 Hitler learned of Heinrich Himmler's contacts with Count Folke Bernadotte in Lübeck. Himmler had asked Bernadotte to convey a peace proposal to US General Dwight D. Eisenhower. Hitler ordered von Greim and Reitsch to fly to Dönitz's headquarters to arrest Himmler.

At 0400 hours on April 29, in the Führerbunker, General Wilhelm Burgdorf, Goebbels, Krebs, and Bormann witnessed and signed the last will and testament of Adolf Hitler. Hitler dictated the document to Traudl Junge, shortly after he had married Eva Braun.

During the afternoon of April 30, Hitler shot himself and Eva took cyanide. In accordance with Hitler's instructions, the bodies were burned in the garden of the Reich Chancellery. In accordance with Hitler's last will and testament, Joseph Goebbels, the Minister for Public Enlightenment and Propaganda, became the new "Head of Government" and Chancellor of Germany (Reichskanzler). At 3:15 am, Reichskanzler Goebbels and Borman sent a radio message to Großadmiral Karl Dönitz informing him of Hitler's death. Per Hitler's last wishes, Dönitz was appointed as the new "President of Germany" (Reichspräsident).

By the end of the day the Soviets had captured the Reichstag.

Final occupants of the Führerbunker by date of departure 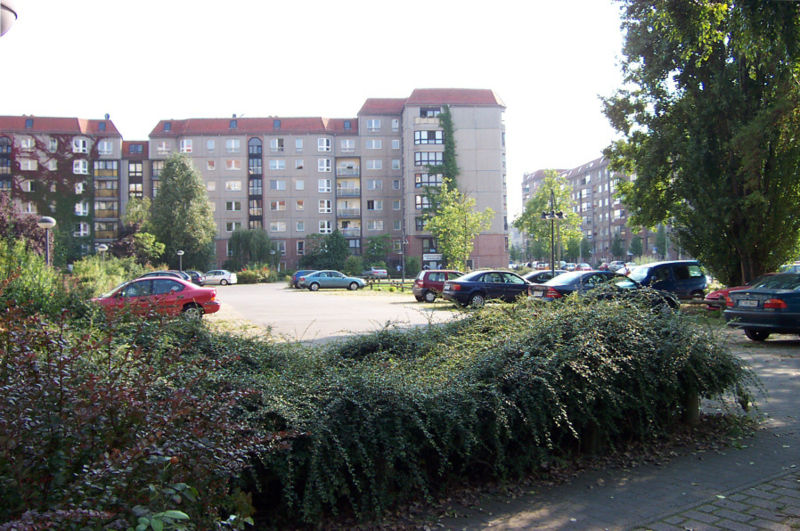 The ruins of both the old (Alte Reichskanzlei) and new Chancellery (Neue Reichskanzlei) buildings were levelled by the Soviets between 1945 and 1949 but the bunker largely survived, although some areas were partially flooded. In 1947 the Soviets tried to blow up the bunker but only the separation walls were damaged. In 1959 the East German government also tried to blast the bunker, apparently without much effect. Since it was near the Berlin Wall, the site was undeveloped and neglected until after reunification. During the construction of residential housing and other buildings on the site in 1988–89 several underground sections of the old bunker were uncovered by work crews and were for the most part destroyed.

In 1990, after the reunification of Germany, the bunker was reopened and photographed. The former Chancellery was situated at the corner of Wilhelmstraße and Voßstraße. Other parts of the Chancellery underground complex were uncovered during extensive construction work in the 1990s, but these were ignored, filled in or quickly resealed.

Since 1945 government authorities have been consistently concerned about the site of the bunker evolving into a Hitler shrine. The strategy for avoiding this has largely been to ensure the surroundings remain anonymous and unremarkable. However, many feel this is simply erasing the past and ignoring the fact that it is essentially the most famous war bunker in history. In 2005 the location of the bunker was not marked in any way. The immediate area was occupied by a small Chinese restaurant and shopping mall while the emergency exit point for the bunker (which had been in the Chancellery gardens) was occupied by a parking lot.

On 8 June 2006 a small plaque was installed with a schematic of the bunker to mark the location. The plaque can be found at the corner of In den Ministergärten and Gertrud-Kolmar-Straße, two small streets about three minutes' walk from Potsdamer Platz. The telephonist Rochus Misch, apparently one of the last persons living who was in the bunker at the time of Hitler's suicide, was on hand for the ceremony. As of May 2007, only one other bunker occupant remains alive: Armin Lehmann still provides researchers with historical facts. Lehmann was a 16-year-old Hitler Youth member assigned to Artur Axmann's staff as Hitler's courier. Lehmann's nephew Steven Schulte in Sutherland, Australia, currently has the only known original photo of Hitler in the final hour in the bunker and has declined its release.