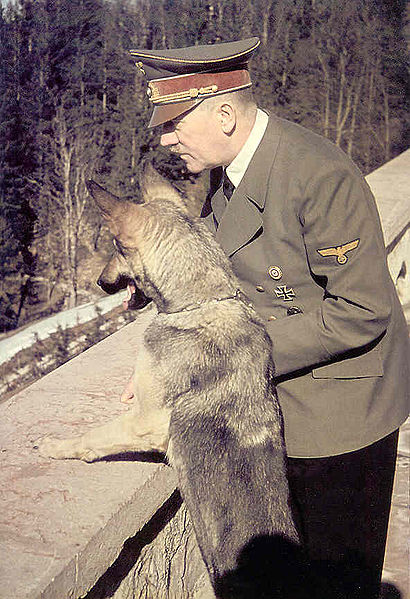 Hitler and Blondi at Berghof

Blondi (1941 – 29 April 1945) was Adolf Hitler's German Shepherd dog, a gift as a puppy from Martin Bormann in 1941, and killed in 1945 when Hitler committed suicide as he feared that the Soviets would capture and torture Blondi after overrunning the bunker.

Hitler was according to accounts very fond of Blondi and other dogs he owned. He may have been especially fond of German Shepherds. In 1921, during his years of poverty, he had been forced to lodge another German Shepherd elsewhere. However, she managed to escape and return to him. Hitler, who adored the loyalty of the dog, thereafter developed a great liking for the breed. There were also other associations such as German Shepherds being argued to be close to wolves and the name "Adolf" meaning "Noble Wolf".