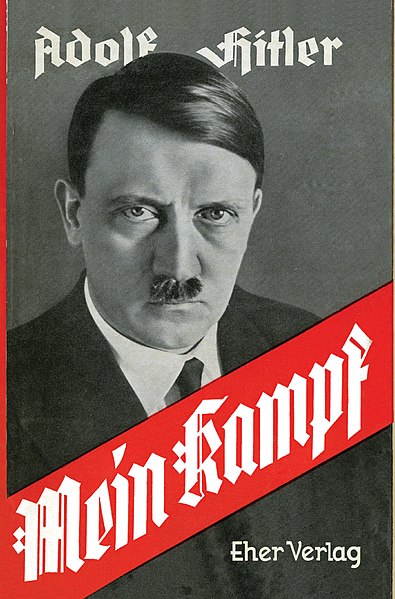 Mein Kampf (often not translated correctly, roughly meaning "My Struggle" or "My Fight") is an autobiography and National Socialist manifesto by Adolf Hitler. The first volume was mostly authored in the Landsberg prison after the failed Munich Putsch and was published in 1925. The second volume was published in 1926. The book was edited firstly by Emil Maurice, then by Hitler's deputy Rudolf Hess.

Hitler originally wanted to call his forthcoming book "Viereinhalb Jahre (des Kampfes) gegen Lüge, Dummheit und Feigheit", or "Four and a Half Years (of Struggle) Against Lies, Stupidity and Cowardice". Max Amann, head of the Franz Eher Verlag and Hitler's publisher, is said to have suggested the much shorter "Mein Kampf".

The arrangement of chapters is as follows:

While Hitler was in power (1933–1945), Mein Kampf came to be available in three common editions. The first, the Volksausgabe or People's Edition, featured the original cover on the dust jacket and was navy blue underneath with a gold swastika eagle embossed on the cover. The Hochzeitsausgabe, or Wedding Edition, in a slipcase with the seal of the province embossed in gold onto a parchment-like cover was given free to marrying couples. In 1940, the Tornister-Ausgabe, or Knapsack Edition, was released. This edition was a compact, but unabridged, version in a red cover and was released by the post office, available to be sent to loved ones fighting at the front. These three editions combined both volumes into the same book.

A special edition was published in 1939 in honour of Hitler's 50th birthday. This edition was known as the Jubiläumsausgabe, or Anniversary Issue. It came in both dark blue and bright red boards with a gold sword on the cover. This work contained both volumes one and two. It was considered a deluxe version, relative to the smaller and more common Volksausgabe.

The book could also be purchased as a two-volume set during Hitler's rule, and was available in soft cover and hardcover. The soft cover edition contained the original cover (as pictured at the top of this article). The hardcover edition had a leather spine with cloth-covered boards. The cover and spine contained an image of three brown oak leaves.

The copyright of Mein Kampf in Europe was claimed by the Free State of Bavaria and expired in 2015. Reproductions in Germany were authorized only for scholarly purposes and in heavily commented form. The situation was however unclear; Werner Maser comments that intellectual property cannot be confiscated and so, it still would lie in the hands of Hitler's nephew, who, however, does not want to have anything to do with Hitler's legacy. This situation led to contested trials in Poland and Sweden. Mein Kampf, however, is published in the U.S., as well as in other countries such as Turkey and Israel, by publishers with various political positions.

After the copyright expired in 2015, a German edition with the translated title "Hitler, Mein Kampf: A Critical Edition" was published. This version is "aimed at promoting political education and is easily comprehensible.” [...] The critical edition, the result of three years of labor by scholars, will include explanatory sections and some 3,500 annotations [...] the German Teachers’ Association, which said earlier this week that the book would “inoculate adolescents against political extremism.”" However, others argue that "This book is too dangerous for the general public".[1][2]

The book became an instant bestseller.[3]

Mein Kampf has been translated numerous times (often several times to the same language) and has been a bestseller in many countries (including but not limited to Islamic countries hostile to Israel).[4][5][6]

There are many English translations of Mein Kampf. Criticisms against different versions have included outdated language, awkward language, deletions of original contents, unwarranted insertion of not original contents, openly hostile introductions and explanatory footnotes, and lack of explanatory footnotes. Like most Germans of the time, Hitler wrote long sentences, fashioned into long, complex paragraphs. Some translations have attempted to make the text easier to read, by breaking up such long sentences and paragraphs into shorter ones (and have in some instances been criticized for this damaging flow and connection of ideas).[7]

The first English translation was an abridgment by Edgar Dugdale, who started work on it in 1931, at the prompting of his wife, Blanche. When he learned that the London publishing firm Hurst & Blackett had secured the rights to publish an abridgment in the United Kingdom, he offered it for free in April 1933. However, a local National Socialist representative insisted that the translation be further abridged before publication, so it was held back from the public until October 13, 1933, although excerpts were allowed to run in The Times in late July. It was published by Hurst & Blackett as part of "The Paternoster Library".

In America, Houghton Mifflin secured the rights to the Dugdale abridgment on 29 July 1933. The only differences between the American and British versions are that the title was translated My Struggle in the United Kingdom and My Battle in the United States; and that Dugdale is credited as translator in the American edition, while the British version withheld his name. Both Dugdale and his wife were active in the Zionist movement; Blanche was the niece of Lord Balfour, and they wished to avoid publicity.

One of the first complete English translations of Mein Kampf was by James Murphy. It had initially started in 1936, as an officially approved National Socialist translation. However, there was a falling out with National Socialist officials and Murphy was ‘fired’ sometime in 1938, with the translation still incomplete. After his dismissal, Murphy returned to England and revised and completed his translation, which was published by Hurst & Blackett in 1939. It is one of the more popular translations.[7]

This translation has been criticized: "because he was ill, Murphy hired one Greta Lorke as assistant translator to help him out. Unbeknownst to him, Lorke was an operative of the “Red Orchestra” (Rote Kapelle, in German), the notorious Communist espionage and sabotage ring run by the Soviet Union. Lorke saw working on the Mein Kampf translation as a perfect cover identity that allowed her to participate in Red Orchestra activities without drawing suspicion to herself. Additionally, she saw the assignment as an opportunity to discredit Hitlerism by fiddling with the passages that she translated."[8]

See the Stalag translation below on an official National Socialist completion of Murphy's early draft translation.

Also in 1939, the British firm Reynal & Hitchcock published a version translated by a team headed by Alvin Johnson.[7]

The third translation appearing in 1939 was by the small Pennsylvania firm Stackpole and Sons, which published a translation by the Jewish William Soskin. It was successfully sued by Houghton Mifflin.[7]

The fourth translation appearing in 1939 was an abridged translation by Alan Cranston, an American reporter and later a U.S. Senator. It was also successfully sued by Houghton Mifflin.[7]

Houghton Mifflin brought out a translation by the Jewish-German writer Ralph Manheim in 1943. The Manheim version has been argued to in practice function as the "official" translation of Mein Kampf and being the translation quoted by nearly all academics and journalists.[7]

"Along with some useful technical notes on translation and others on historical context, it also includes a number of gratuitous, negative footnotes, as well as an anti-Hitler introduction. More troubling are Manheim’s downright errors, however. For example, on page 490, when discussing the SA, Manheim translates Kampfgemeinschaft as “combat group,” whereas the proper translation is “fighting community,” a small but significant difference; Hitler goes out of his way to make the point that the SA should NOT be a military-style “combat group” (pp. 538-543). On page 623, Manheim inexplicably substitutes “Jewish” for “German” in one phrase, reducing the sentence to nonsense. (Manheim’s version reads “national folkish Jewish intelligensia,” whereas Hitler’s original is “national folkish German intelligensia.”) It is not surprising that some mistakes should occur here and there in a translation nearly 700 pages long. However, the Manheim version first appeared in 1941, and these errors should have been corrected in the numerous reprints that have been issued since then!"[8]

However, this translation has also been criticized.[7][10]

National Socialist Germany completed Murphy’s draft translation on their own and published it in the late 1930s. Today, this is known as the Stalag edition. The Stalag translation "was printed by the Franz Eher Verlag in Berlin for the Central Press of the NSDAP in limited numbers during the years 1937 to 1944. Most copies were distributed to the camp libraries of English-speaking Prisoner of War (POW) camps, and became known as the “Stalag” editions (Stalag being a contraction of the German word Stammlager, or POW camp) because they all carried a camp library rubber stamp on the title page."[11][7]

This official translation was for a long time unknown or ignored. However, today there are two different versions of this translation being sold. The version published by Elite Minds claims to be "authentic". This has been argued to mean that it retains all the original errors of grammar, punctuation, and spelling.[7]

The Stalag translation version published by Ostara Publications has been argued to fix many of the above mentioned errors.[11][7]

The revisionist Thomas Dalton is working on a new translation. "My forthcoming translation addresses and resolves many of these unfortunate drawbacks. First, by including the full and original German text, in a parallel translation, the English wording can be easily verified. This technique has often been used with classic Greek and Latin authors, but never before with Mein Kampf. Section headings have been added, in text, in bold. The German original employed such headings, but only at the top of each page; the reader thus never knew where a new section actually began. These headings have been translated and inserted at the appropriate points, in my estimation, and directly in the text. My translation also has helpful and relevant footnotes, a useful index, and a bibliography of relevant secondary source material. Most important of all, though, is the fact that the English reads smoothly and naturally."[7]

The translated volume one of Mein Kampf was published in 2017. The second volume was completed in 2019.[12]

Articles and forum threads on Mein Kampf and the different translations

Part of this article consists of modified text from Wikipedia, and the article is therefore licensed under GFDL.
Retrieved from "http://en.metapedia.org/m/index.php?title=Mein_Kampf&oldid=468370"
Categories: