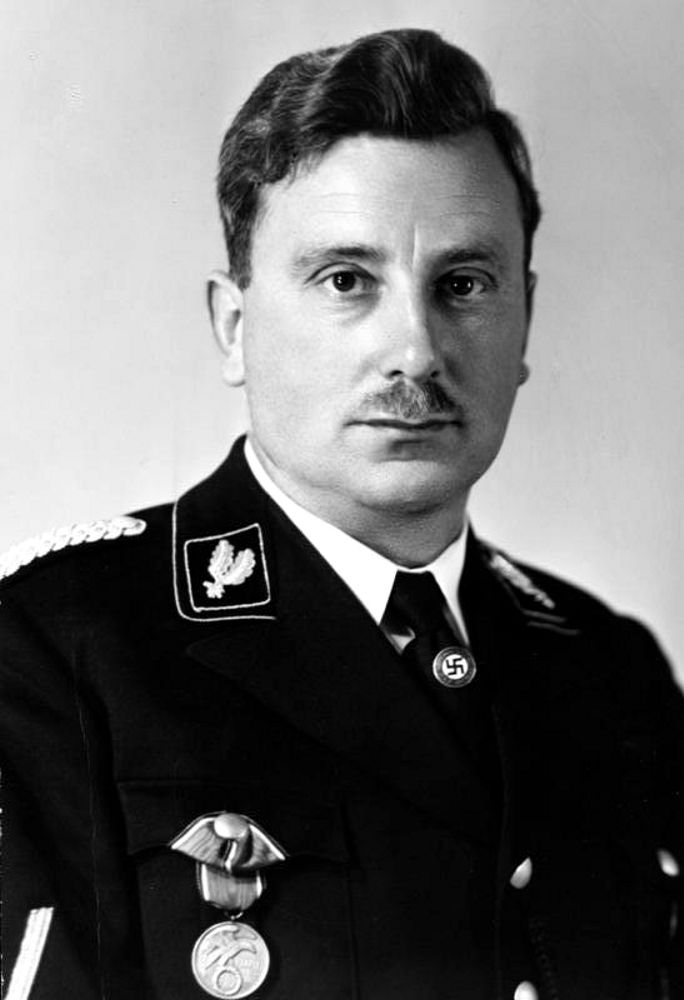 Emil Jules Wilhelm “Moritzl” Maurice (b. 19 January 1897 in Westermoor, Provinz Schleswig-Holstein; d. 6 February 1972 in Munich ) was a master watchmaker of partial Jewish ancestry and an early member of the National Socialist German Worker's Party. He was a close associate of Adolf Hitler with a personal friendship dating back to at least 1919. With the founding of the Sturmabteilung in 1920/21, Maurice became the first unofficial Oberster SA-Führer (Supreme SA Leader). He was a veteran of the Imperial German Army, although not active on the war front with the Bavarian Army in WWI, an officer of the SS and the Wehrmacht, at last SS-Oberführer, SS-Ehrenführer and Oberleutnant der Reserve of the Luftwaffe in World War II. 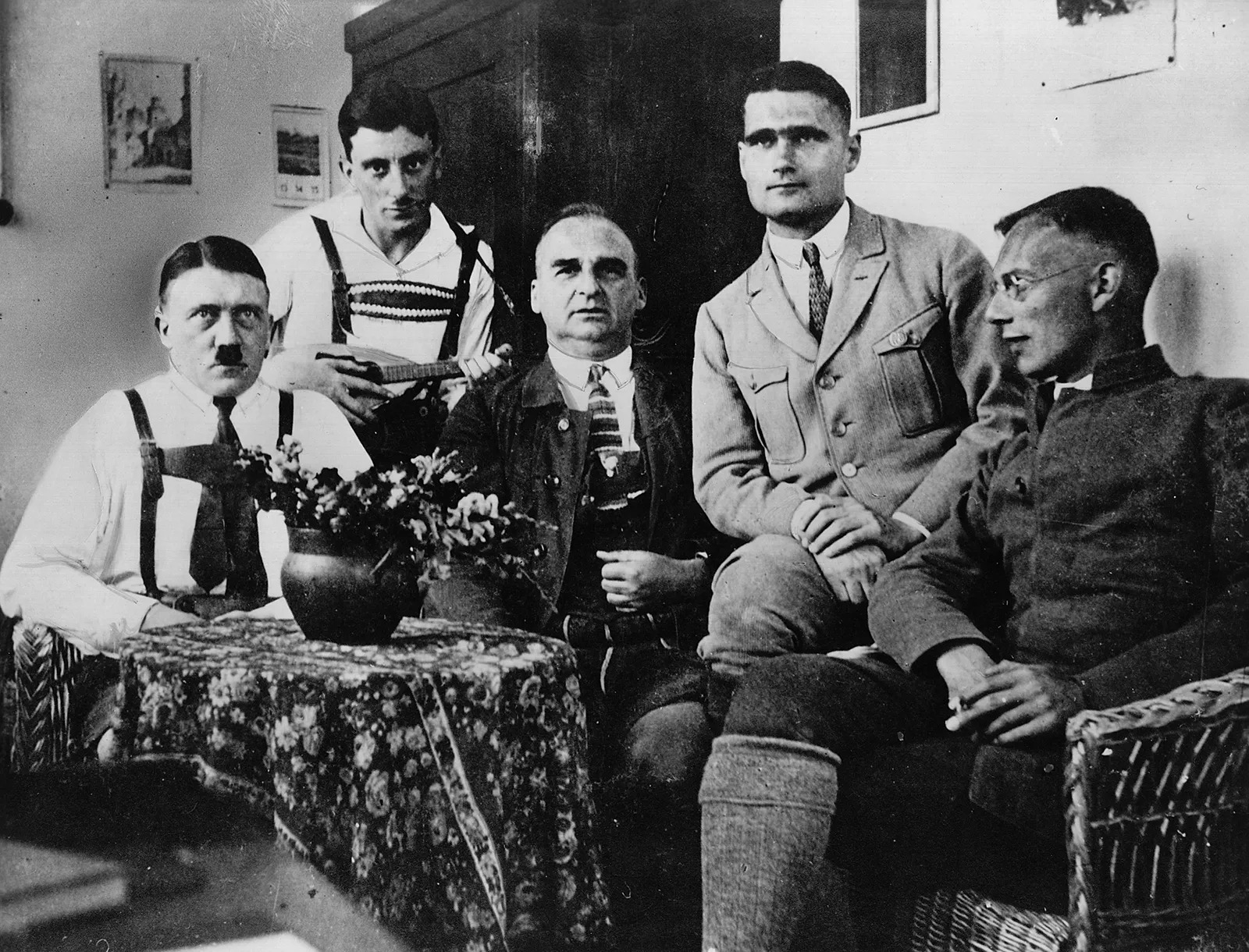 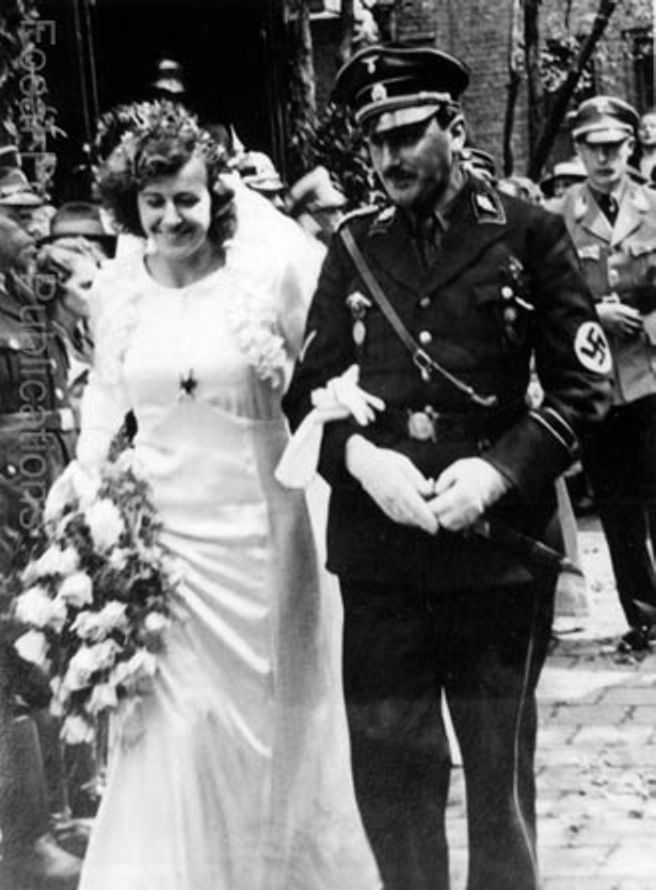 Emil Maurice and his 14 year younger bride Hedwig on their wedding day, 11 May 1935 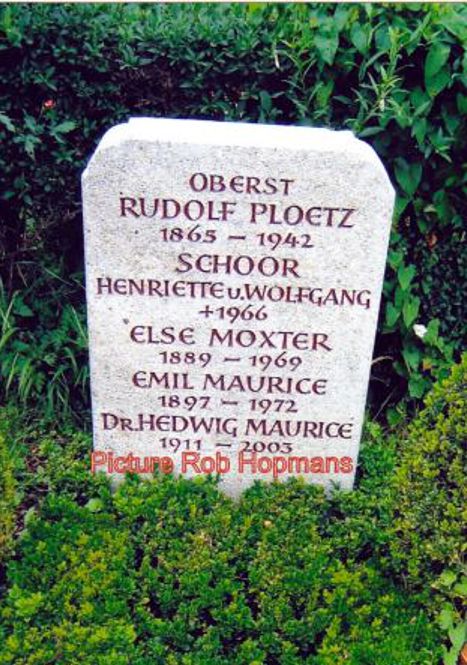 In 1923, Maurice also became member of the newly established Stabswache (the forerunner of the later SS) under Julius Johann “Hans” Ulrich Klintzsch and the Stoßtrupp „Adolf Hitler“ (as of May 1923) under Joseph Berchtold (as his adjutant), a special SA company given the task of guarding Hitler at National Socialist parties and rallies. He was imprisoned with Hitler and Rudolf Hess at Landsberg after the failure of the Munich Putsch. Maurice was the first secretary to Hitler at Landsberg and helped the him with the initial typing of Mein Kampf.

In 1925, two years after the failed Beer Hall Putsch, Maurice and Hitler refounded the Stabswache as the Stosstrupp Adolf Hitler which was renamed, later that year, as the Schutzstaffel (SS). At that time, Hitler became SS Member Nr. 1 and Emil Maurice became SS Member Nr. 2. Maurice became an SS-Führer in the new organization, although the leadership of the SS was assumed by Julius Schreck, the first Reichsführer-SS. Maurice, once again, became Hitler's chauffeur. He reportedly had a brief relationship with Geli Raubal, Hitler's niece, and lost his job as Hitler's chauffeur in 1928, returning to store, which he still owned. Still, a special bond of friendship seems to have prevailed between them. During the height of the Rbhm crisis, some six years later, Maurice reappeared beside Hitler.

When the SS was reorganized and began to expand in 1932, Maurice became a senior SS officer and would eventually be promoted to the rank SS-Oberführer. While Maurice never became a top commander of the SS his status as SS Member #2 effectively credited him as the actual founder of the organization. Heinrich Himmler, who ultimately would become the most recognized leader of the SS, held SS Member #168.

Maurice was with Hitler during the Night of the Long Knives.

After Himmler had become Reichsführer-SS, Maurice fell afoul of Himmler's racial purity rules for SS officers, when he had to submit details of his family history before he was allowed to marry. All SS officers had to prove racial purity back to 1750, and it turned out that Maurice had Jewish ancestry – Charles Maurice Schwartzenberger (1805–1896), the founder of Thalia Theater in Hamburg, was his great-grandfather.

In accordance with SS marriage laws, in order to marry on 11 May 1935, Maurice was required to submit proof of his bride’s and his own “pure German-blood descent” to the SS-Rasse- und Siedlungshauptamt. In the course of the subsequent genealogical investigation, the groom-to-be was found to be of partly Jewish blood. His great-grandfather was the Jewish founder of Hamburg’s Thalia Theater, Charles Maurice Schwarzenberger (1805-1896), and this fact prompted the Reichsführer-SS to demand that Hitler order his removal from the SS. Hitler refused to do so, as “Moritzl” was one of his earliest assistants and a founding member of the SS. The Führer authorized a Gnadeerlaβ (amnesty) declaring Maurice and his brothers as Ehrenarier (honorary Aryans).

Himmler recommended that Maurice be expelled from the SS, along with other members of his family. However, the Führer stood by his old friend. In a secret letter written on the 31.8.1935, Hitler compelled Himmler to make an exception for Maurice and his brothers, who were informally declared "Honorary Aryans" (Ehrenarier) and allowed to stay in the SS. Despite his Jewish ancestry, and his relationship with Hitler's niece, Geli Rabaul, Maurice was first and foremost a loyal companion to Hitler.

On 25 May 1945, he was arrested by U.S. troops in Starnberg and interned there. In September 1946, he was transferred to Lager Cham bei Regensburg. On 18 December 1947, he was indicted by the Spruchkammer in Regensburg. On 13 May 1948, he was convicted in de-Nazification proceedings that resulted in his classification as a “Belasteter” (incriminated person, in de-Nazification Gruppe II). He was sentenced to four years in a labor camp and had 30 % of his assets confiscated. In 1951, he owned a luxury watch shop at Schumannstraβe 5 in München.

Emil was born the son of Karl Emil Amandus Maurice (b. 1864 in Hamburg), a factory owner, and his wife Amanda, née Hennings. He had two brothers, both of whom also served in the SS, including:

SS-Standartenführer Maurice became engaged on 31 March 1935 to the medical student and later Dr. med. Hedwig Maria Anna Ploetz (b. 26 August 1911 in Aschaffenburg; d. 30 November 2003 in Percha), daughter of Oberst Rudolf Ploetz/Plötz (1865–1942). They married in München on 11 May 1935, with SS-Oberführer Christian Weber and Prof. Heinrich Hoffmann appearing as witnesses. Two children resulted from this marriage: