From Metapedia
(Redirected from Rudolf Hess)
Jump to: navigation, search 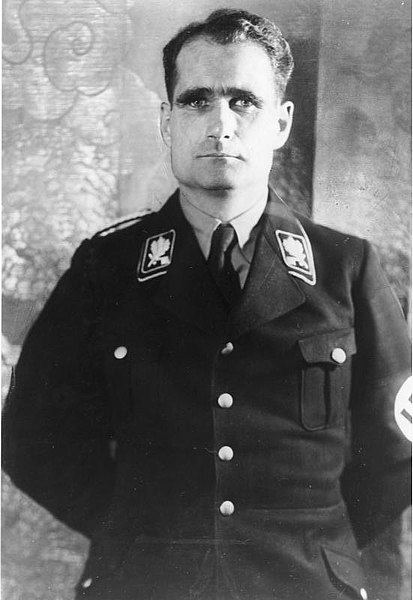 Rudolf Walter Richard Heß (spelled Hess in English; 26 April 1894 – 17 August 1987) was a prominent NSDAP member and later National Socialist Germany official. He participated in the failed 1923 Munich Putsch. Adolf Hitler dictated Mein Kampf to Hess and Emil Maurice, while being in prison for the attempted coup, and Hess participated in the editing. Appointed Deputy Führer to Adolf Hitler in 1933, he served in this position until 1941.

On 10 May 1941, during World War II, he flew solo to Scotland in an attempt to negotiate peace with the United Kingdom. Allegedly, this was a personal initiative by Hess without official German approval. The proposal was ignored and Hess was taken prisoner. He eventually became a defendant at the Nuremberg Show Trials and was sentenced to life imprisonment.[1] He allegedly committed suicide in 1987 in the Spandau Prison.

Criticisms of the politically correct view on the peace proposal, the sentencing, and the alleged suicide

Controversy surrounds the peace proposal, what it offered, and if Hitler knew about it. The very strict lifelong imprisonment and "suicide" of Hess have been seen as intended to prevent Hess from revealing circumstances embarrassing for the (Western) Allies. For example, a British acceptance of a German peace proposal may possibly have prevented the later enormous casualties and destruction due to the war, "the Holocaust", and the postwar Communist occupation of and terror in Eastern Europe.

The official National Socialist rejection of Hess and the peace proposal (once it failed) may have been due to the peace proposal containing sensitive details, such as a proposed alliance against the Soviet Union, which was at this time a German ally.

Regardless of the above theories are correct or not, the lifelong imprisonment of Hess has been seen as a particularly unjust part of the Nuremberg trials. British historian A.J.P. Taylor once summed up the arguments for the injustice of the Hess case: "Hess came to this country in 1941 as an ambassador of peace. He came with the ... intention of restoring peace between Great Britain and Germany. He acted in good faith. He fell into our hands and was quite unjustly treated as a prisoner of war. After the war, we should have released him. Instead, the British government of the time delivered him for sentencing to the International Tribunal at Nuremberg ... No crime has ever been proved against Hess ... As far as the records show, he was never at even one of the secret discussions at which Hitler explained his war plans."[2]

Regarding the alleged suicide, his lawyer, Dr Seidl, felt Hess was too old and frail to have managed to kill himself. His son Wolf Rüdiger Hess repeatedly claimed that his father had been murdered by the British Secret Intelligence Service, to prevent him from revealing not politcally correct information. Abdallah Melaouhi, who served as Hess's medical orderly from 1982 to 1987, wrote a book on a similar theme. A report released in 2012 again raised the question of whether Hess was murdered. Historian Peter Padfield claims the suicide note found on the body appears to have been written when Hess was hospitalized in 1969.

A 2013 article in The Telegraph stated that "Peter Padfield, an historian, has uncovered evidence he says shows that, Hess, the deputy Fuhrer, brought with him from Hitler, a detailed peace treaty, under which the Nazis would withdraw from western Europe, in exchange for British neutrality over the imminent attack on Russia. The existence of such a document was revealed to him by an informant who claims that he and other German speakers were called in by MI6 to translate the treaty for Churchill. [...] There is no mention of the treaty in any of the official archives which have since been made public, but Mr Padfield believes this is because there has been an ongoing cover-up to protect the reputations of powerful figures. The author says that his informant broke off contact with him after approaching his former masters in the security services."[3]

See also the "External links" section on these topics.

Remembrances and destruction of remains

The above contributed to Hess becoming a symbol for critics of the official view on National Socialist Germany and the war. Remembrances and demonstrations have been held at anniversaries of his death, and in particular in Wunsiedel, where Hess was buried.

In order to try to prevent remembrances and symbolism, the entire Spandau Prison has been demolished. Demonstrations have been banned. In 2011, the remains of Hess himself were exhumed, cremated, and scattered at sea. The gravestone, which bore the epitaph "Ich hab's gewagt" ("I have dared"), was destroyed.

Part of this article consists of modified text from Wikipedia, and the article is therefore licensed under GFDL.
Retrieved from "http://en.metapedia.org/m/index.php?title=Rudolf_Heß&oldid=462998"
Categories: